After a successful (but unofficial) Big Shed BruChocs stout in 2015, Robern Menz have jumped on board for an official 2019 FruChocs collaboration beer.

The beer officially launched on FruChocs Appreciation Day, Friday, 23 August, and is the second iteration of the brew. Big Shed originally released BruChocs in 2015 at Queensland craft beer event Brewsvegas, in collaboration with Newstead Brewing.

Big Shed‘s BruChocs stout is available for a limited time. For a full list of stockists, scroll to the bottom of this article.

The 2015 edition of BruChocs was merely inspired by its namesake sweet, without any input from Robern Menz. The Big Shed team brought a keg of the brew back and showed the company and discussions started as to how an official collaboration could come about.

“They didn’t sue us, which was a nice thing,” brewer Craig Basford laughs, “but instead got behind us and said, ‘We want to help you market this product, because it’s a lot of fun.’”

Four years later, and with a push from Brand SA earlier in the year, Big Shed finally found room in its brew schedule for an official FruChocs collaboration.

“Brand SA got us in a room and…they were super keen to see it done and they pushed it a little bit, and I think a few bottle shops had spoken to them about how they would love to see it,” Craig says.

“That certainly made it easier for us to go, let’s give it a go and see what happens.”

With Robern Menz on board and involved in the recipe design process, Big Shed was able to use the official FruChoc apricot and peach fruit mixture, adding a quarter tonne of to the brew.

The 2015 BruChocs had a very subtle fruit flavour, Craig says, but the 2019 version is “a lot more in keeping with the FruChoc flavour.”

“[It’s got] that big fruity tartness, and then that sweetness comes in behind it,” he says.

“Chocolate and stouts always seem to work really well… It’s just working with flavours we know will work and making that balance of roasted malt and sweet chocolate and sweetness from a bit of lactose as well, and the tartness, and balancing it all up.” 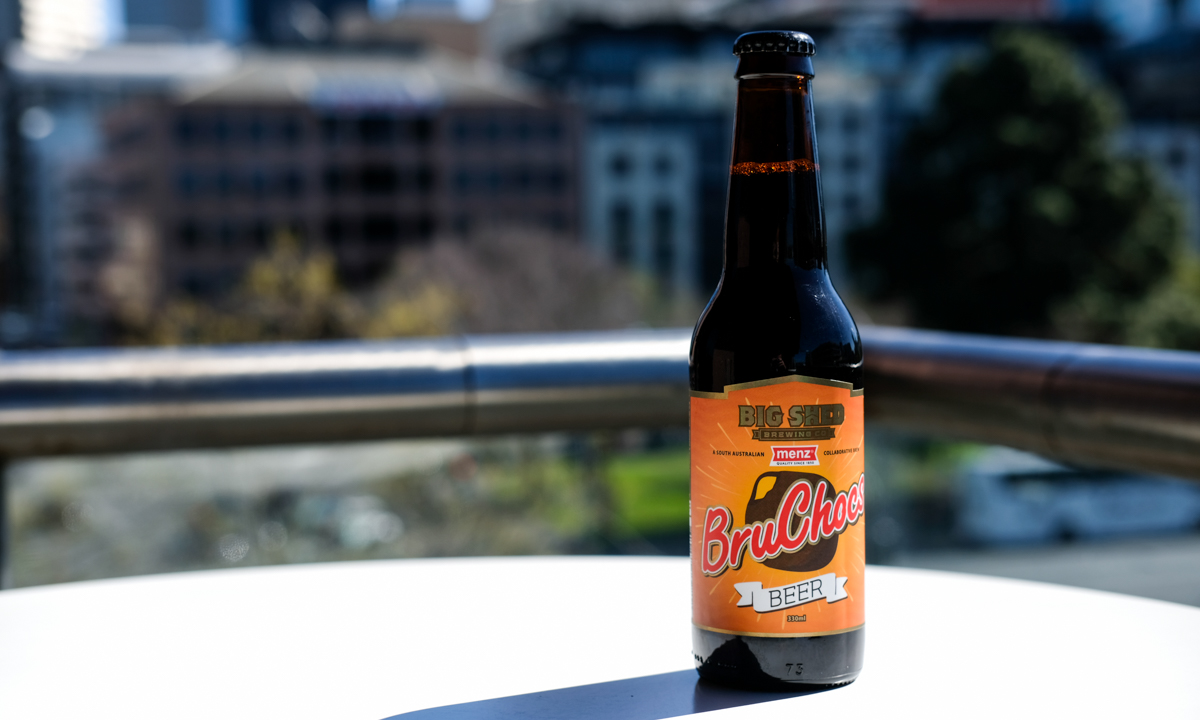 Two batches of BruChocs have been made – about 2000 litres each – and the beer has been distributed throughout Adelaide and is available from today.

FruChoc Appreciation Day celebrations are happening in Rundle Mall from 10am ‘til 6pm on Friday, 23 August, and a BruChocs launch party is also happening at Big Shed’s Royal Park brewery from midday.

BruChocs is available for a limited time only (see below for a full list of stockists), but, depending on demand, the next batch could come along very soon.

“It’s a bit like the Golden Stout Time – people demanded it and if they keep on demanding it, we’ll keep knocking it out for them,” Craig says.

“I’d like to see it, at the very least, as an annual celebration of the FruChoc, and of Robern Menz. I really rate what they do and how they go about it, so if we do that on an annual basis, that’d be great, but if demand is such that we need to do it more often, then that’s a conversation we can have.”