Executive Chef of the Big Easy Group Harry Bourne watches over the kitchens of The Stag, Yiasou George and the recently opened Mexican restaurant Masa in Bowden.

In the southern park lands, the chef set himself the challenge of cooking a whole honey-glazed chicken on a public barbecue.

When CityMag arrives at a southern park lands public barbecue with chef Harry Bourne at 11am on a Monday, we’re surprised to find another group has beaten us to the hotplate.

We exchange pleasantries and establish dibs on the next round as they finish searing an 8-pack of late-morning sausages.

While we wait, we head west to Walyo Yerta, a community garden located just behind Veale Gardens, a short walk from our barbecue.

The plot has been here for 11 years and has extended its footprint a couple of times in its life, due to city-based schools being given garden beds to look after. Around 40 volunteers contribute 2800 hours of work every year to keep it tidy.

Part of Harry’s excitement for this assignment came from knowing he would have this garden to play with.

The volunteer group, which meets at Walyo Yerta every Monday and Thursday, is just as excited to see Harry arrive.

Greg Martin, who manages the garden, leads the chef on a tour that yields some native thyme, warrigal greens, flowers to garnish, and a couple of potatoes.

Back at the hotplate, we’ve been given the all-clear to start setting up.

Harry came into the Big Easy Group with a fine-dining background. He grew up in England and has worked at one-Michelin-starred The Bath Priory, but flew out to Sydney in 2011 for a four-day trial at Quay, which had no guarantee of a job at the end of it.

A job did eventuate and Harry worked two stints there, both in the pastry section. The chef also worked at Sydney venues Restaurant Hubert and Love Supreme. Through this time he found he no longer wanted to work in the fine-dining world. 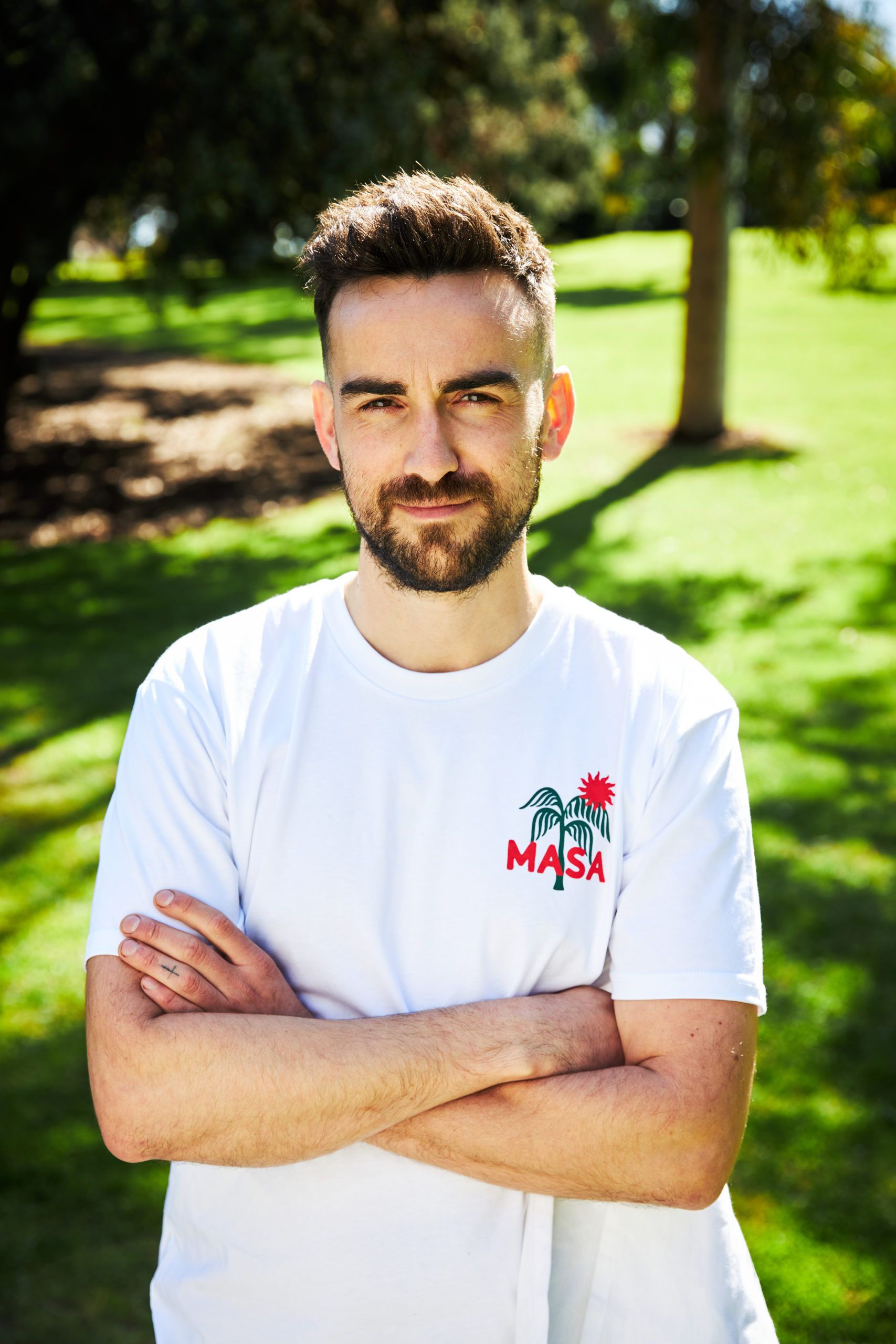 “I was done putting tiny flowers on little, pretty plates, you know?” he says.

Harry explains the reason he started cooking is for occasions like today – making humble, delicious food amongst friends.

“It used to be fun, and it was ‘Come around and I’ll cook and we can all have a great time’,” he says.

After breaking up with his girlfriend of seven years, Harry decided it was time to move on from Sydney and find a way to reconnect with simpler food. A friend, Laura, who he’d met by chance at Dark Mofo in Tasmania three years ago, offered to introduce him to her brother in Adelaide – Oliver Brown, a co-founder of the Big Easy Group.

Harry had never considered moving to South Australia, but having seen how Adelaide managed to maintain life during a time of pandemic, he took up the offer.

Working in the kitchens of The Stag Public House, Yiasou George and Masa, the chef found he could go back to his initial love of cooking fun food in a fun environment.

A bonus has been the accessibility of South Australian produce – including the Nomad Farms chicken Harry has prepared within two 20-minute clicks of the public barbecue. 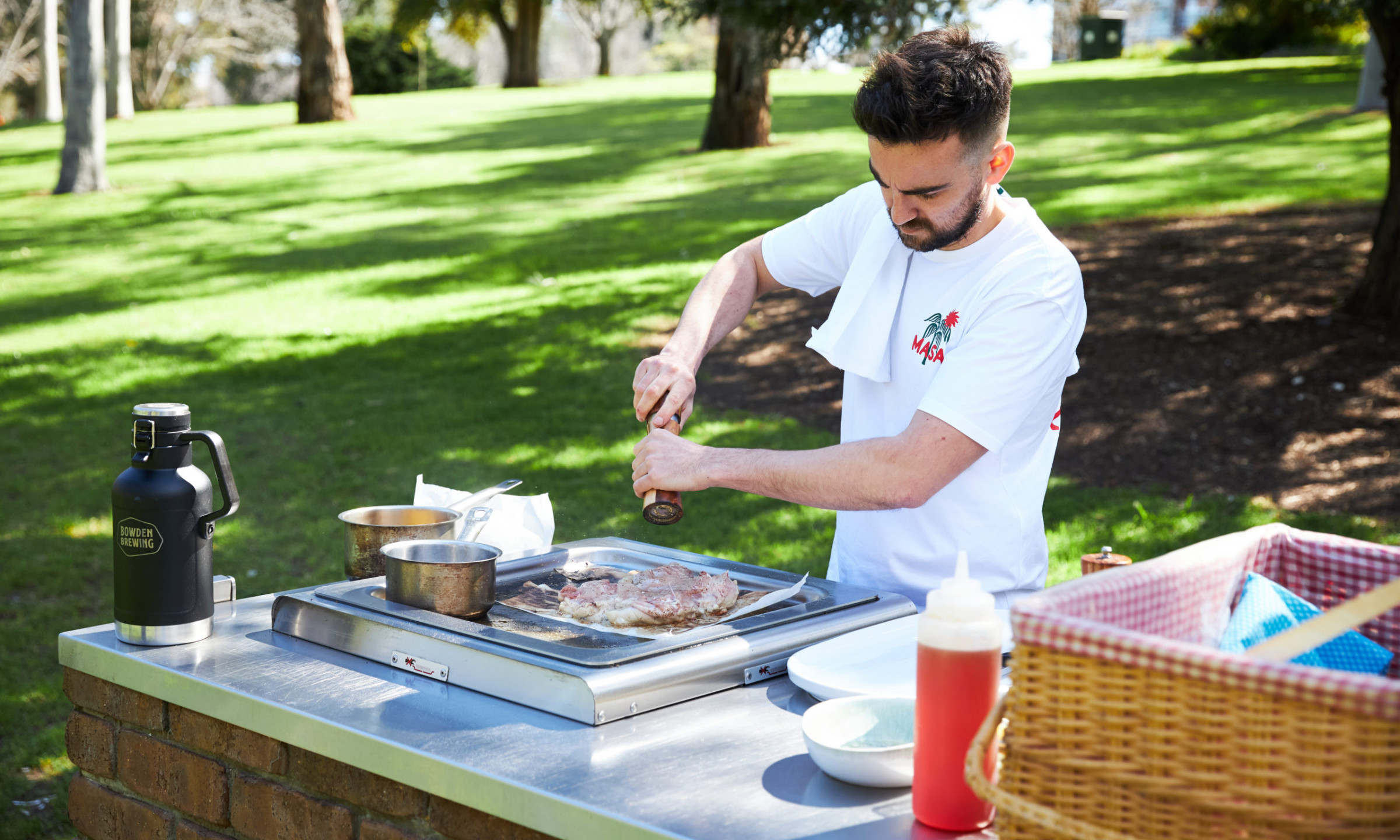 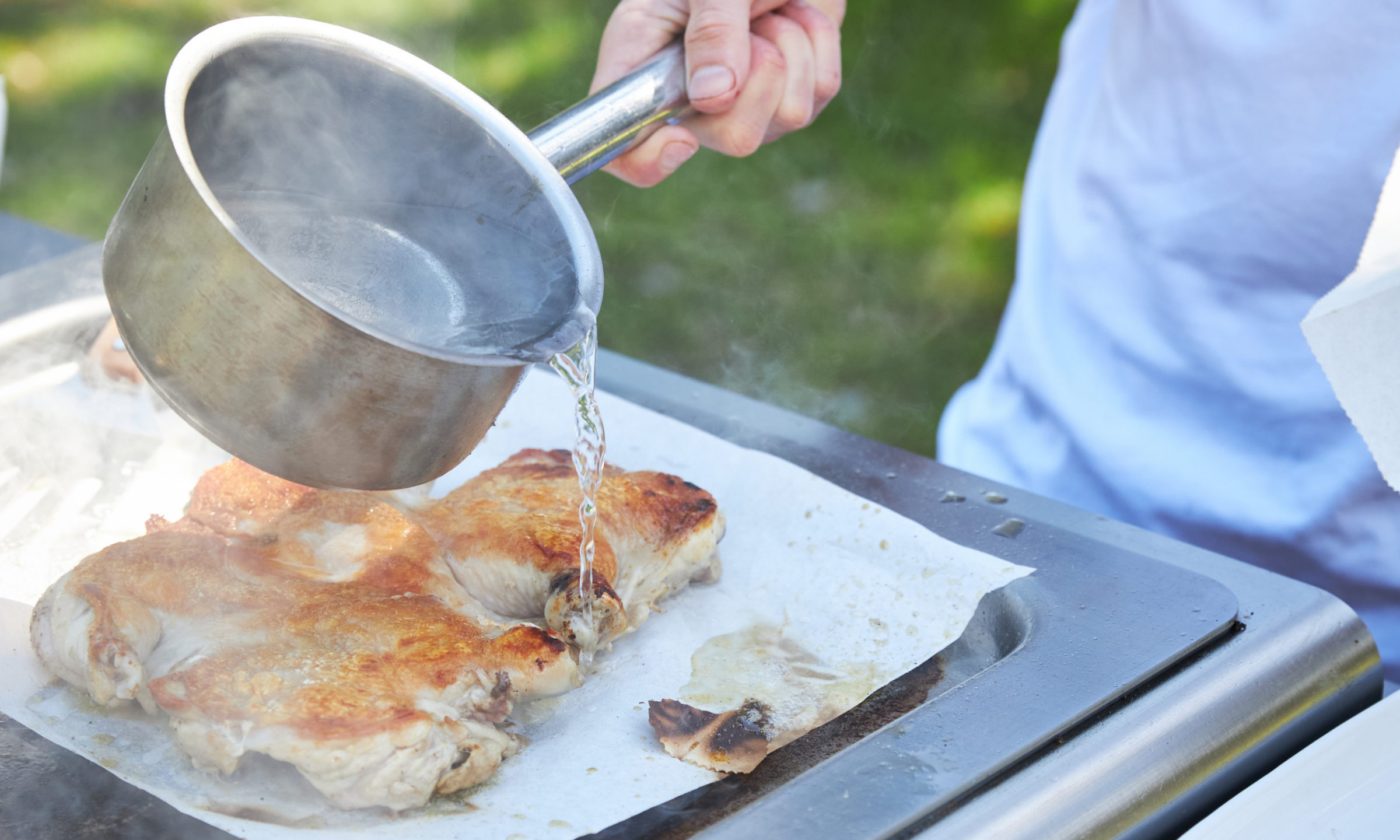 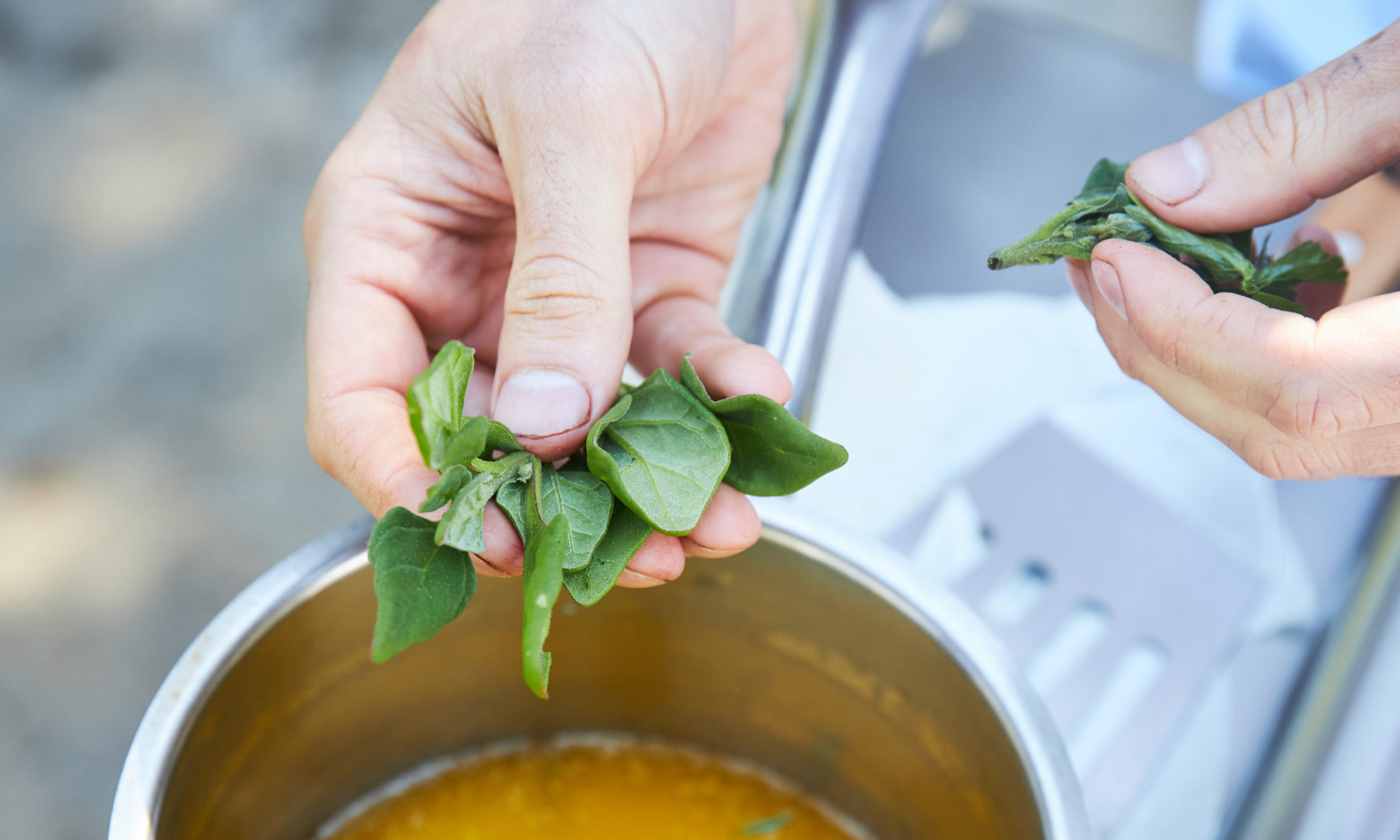 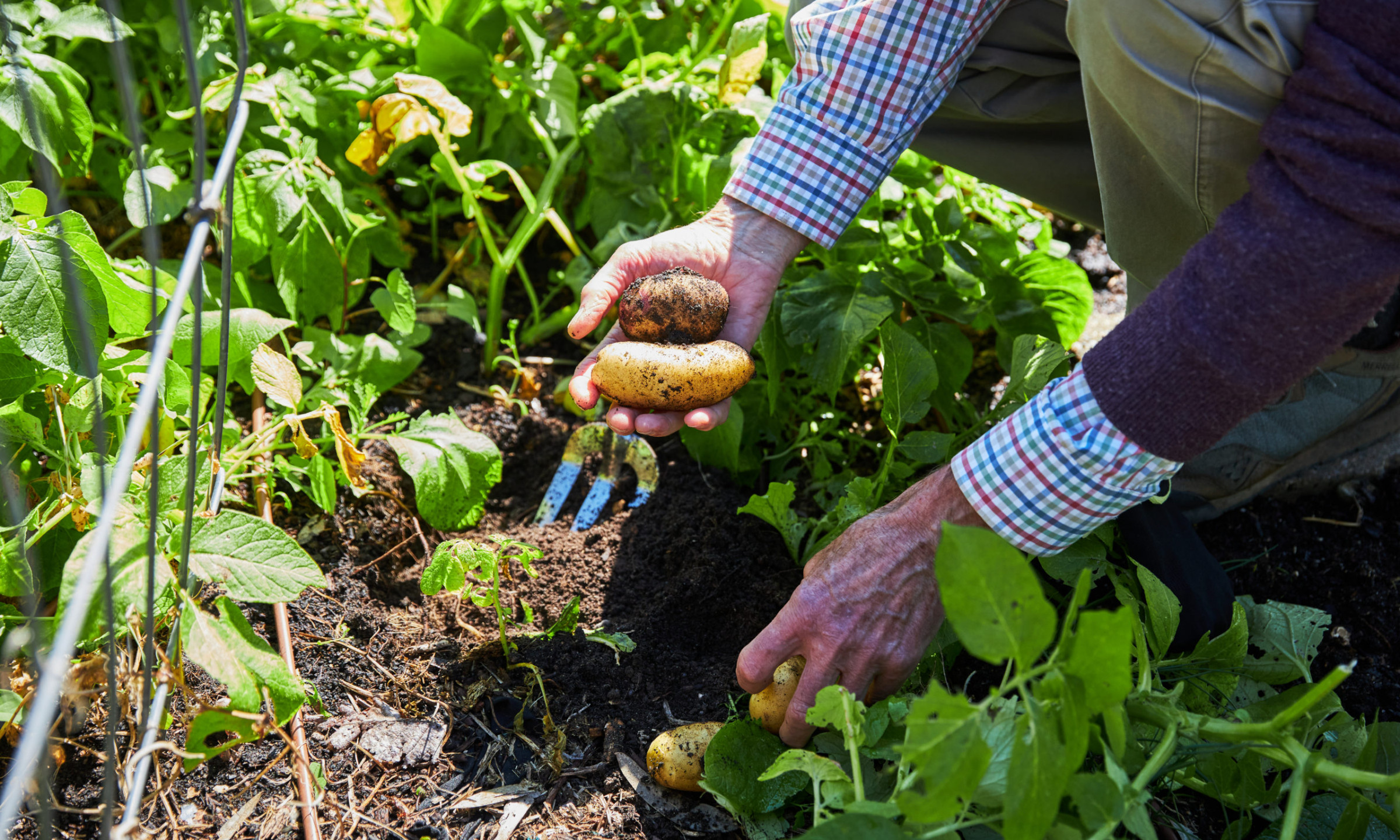 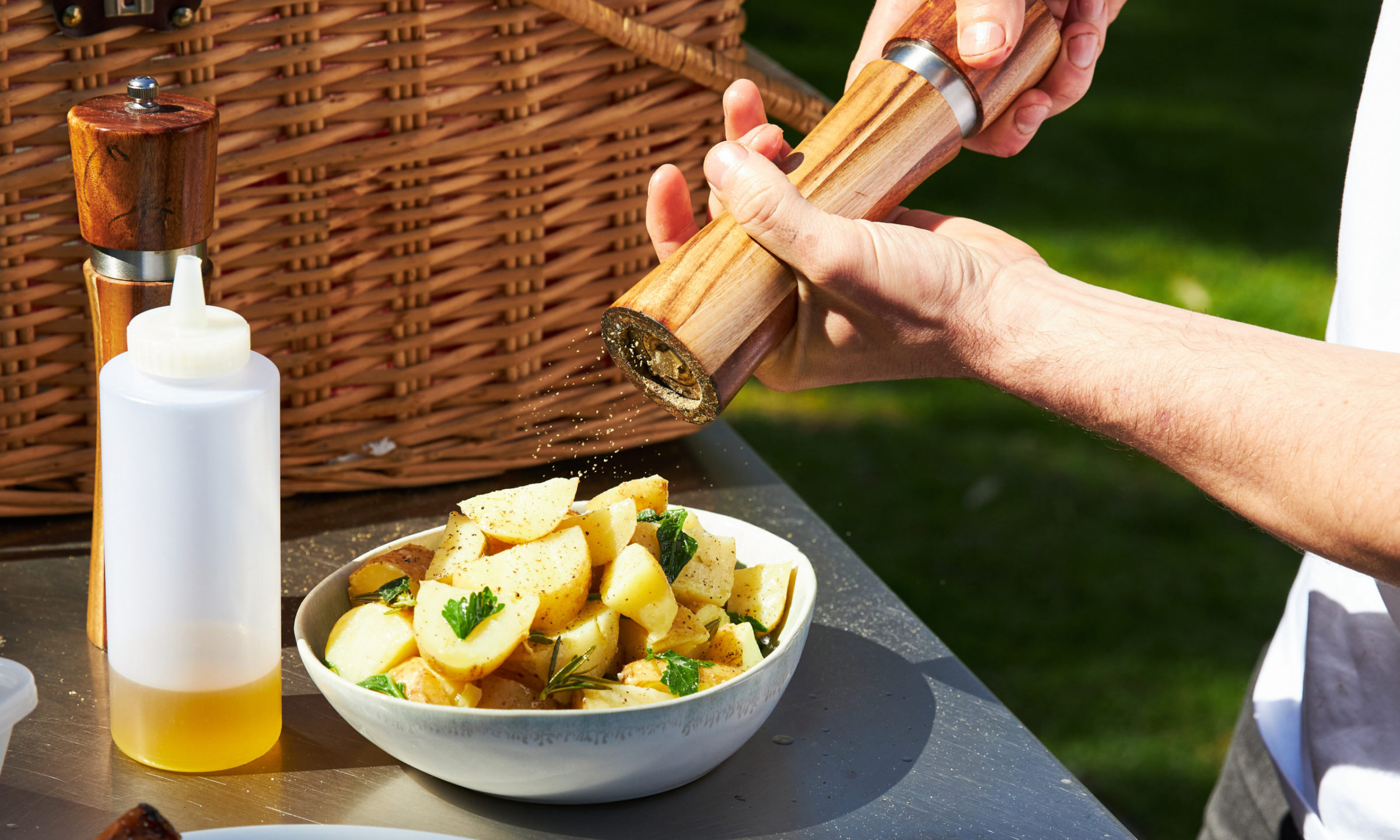 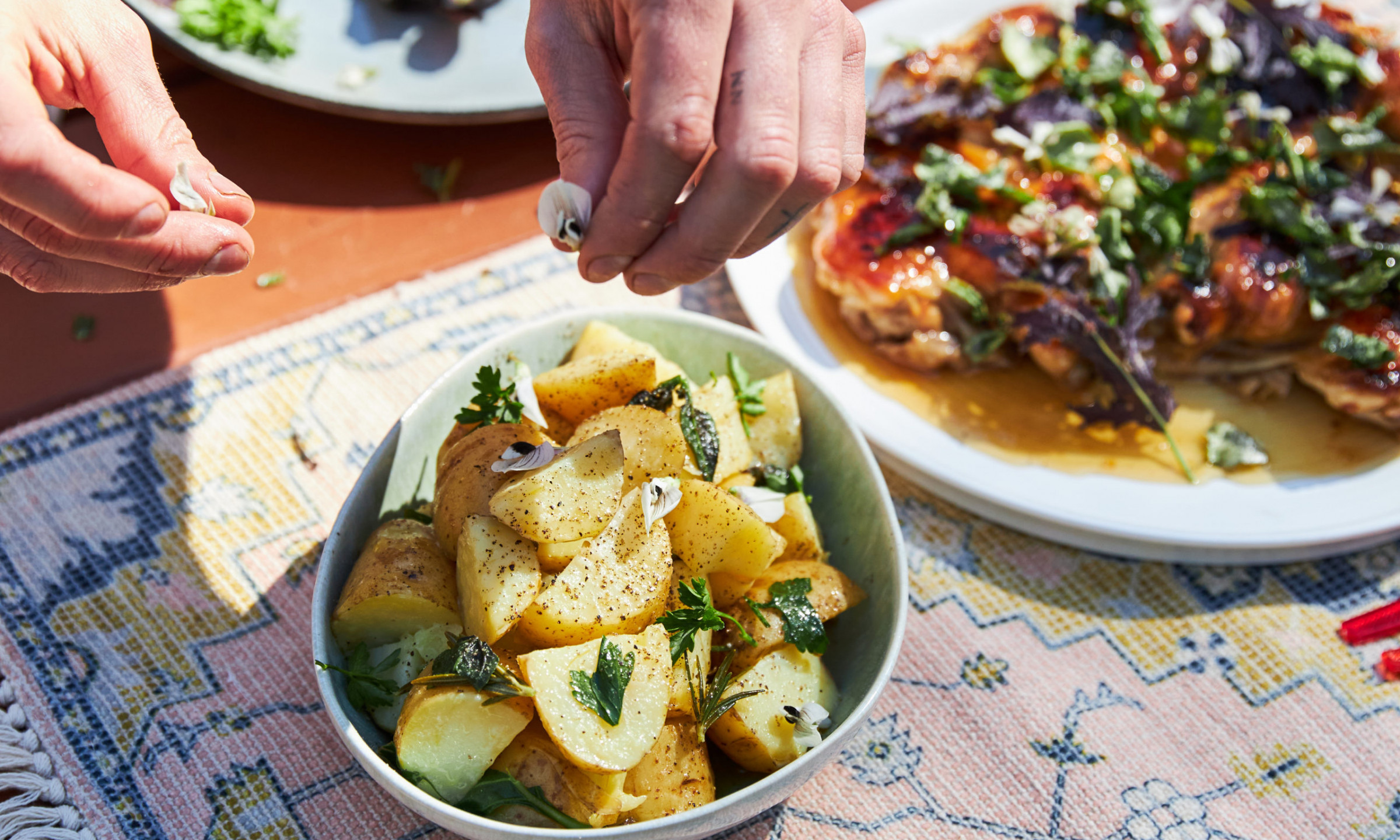 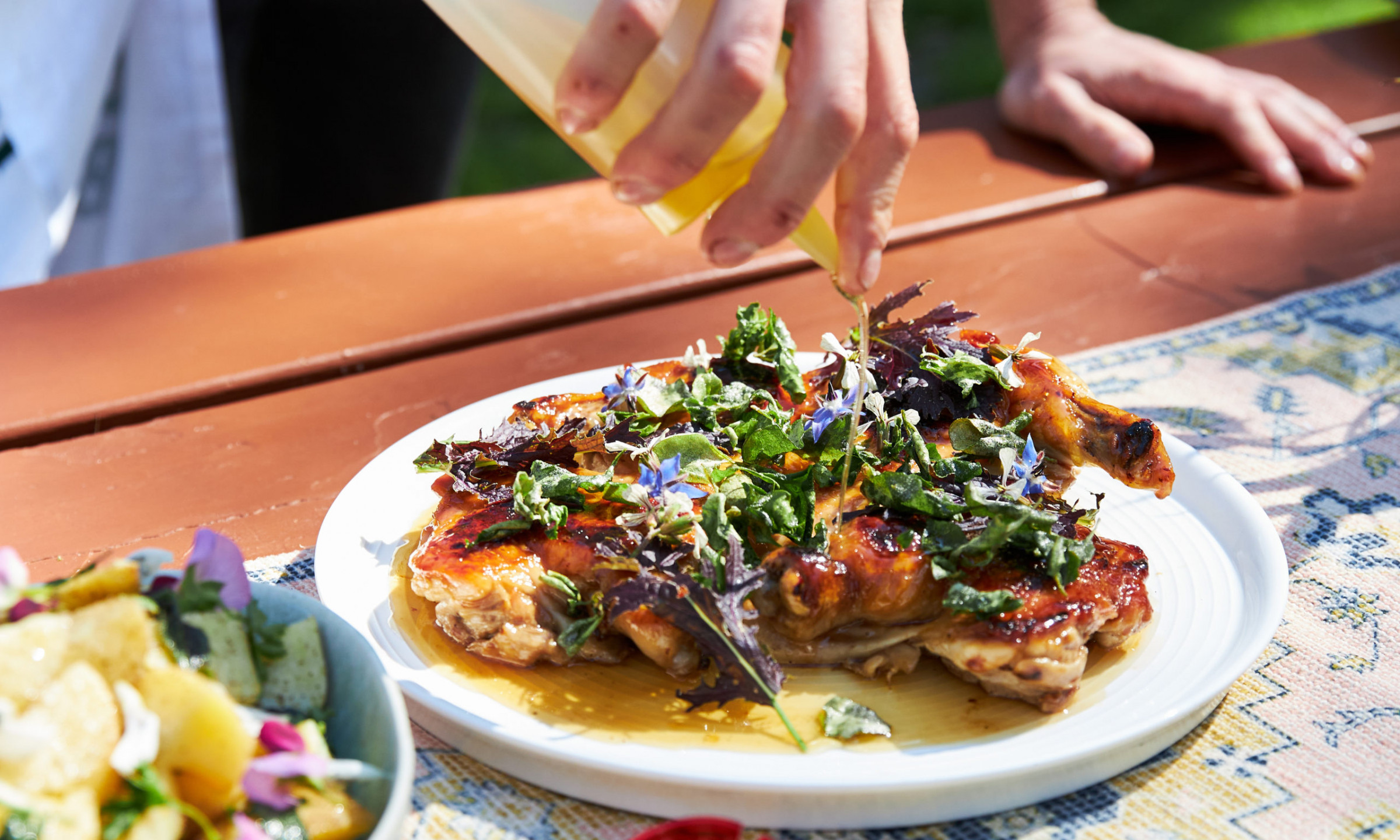 “When I first came here, I only wanted to use things that are from South Australia,” he says.

“I was just really all about the produce and the availability of produce here.

“I literally get people coming to the restaurant going, ‘Here are some foraged porcinis from the Hills,’ or ‘Here’s this amazing honey.’

“It’s just sick to have that mentality where people just bring me amazing produce, and I just get to cook with it. It’s the joys of my job.”

With the meal prepared and consumed, Harry cleans down the barbecue, just as another group comes over the hill, also looking to make the most of the sunshine, cooking amongst friends.

1. First things first – sanitise that BBQ. Who knows what people have been cooking on there. Probably spam. Then turn it on and give it 5-10 minutes to get warm.

2. Put a pot of heavily salted water (think the saltiness of the sea and you’re on the right track) on the BBQ and add the potatoes. Cook until soft (when your knife runs through the flesh with ease), drain and set aside. Place the butter in the pan to melt, finely chop the garlic, thyme, parsley and warrigal greens, add to the butter and set aside.

3. Heavily salt the chicken both sides. Lay a sheet of baking paper down on the BBQ, add half the canola oil, then lay the chicken skin side down, hopefully to a satisfying sizzle. Pour the remaining oil over the top of the chicken, cover with the second sheet of banking paper then press the large plate on top, to weigh the chicken down and make sure all of the skin is in contact with the hotplate. Cook for 10 minutes on one side, then flip it over and cook for another 10 minutes.

Note: Remember to hit the power button on the BBQ again after 20 minutes. Add a little water if the chicken is starting to burn. This is a great way to slow the cooking down, and deglaze all the caramelised chicken bits stuck to the paper – yum.

4. Once the chicken has browned on both sides, flip it back so the skin side is facing down. Lift it off the paper and add a few tablespoons of honey between the paper and the skin of the chicken. Cook for another 5 minutes so the honey caramelises. Flip the bird over and place it on the large plate, skin side up. Drizzle with the remaining honey and garnish with the mustard leaves and fried saltbush.

5. For the potatoes, pour the warmed butter over the potatoes and mix well, seasoning with salt and pepper. Place in a bowl and garnish with fresh flowers from the garden.