From stews to sexting, there are many ways to make use of an eggplant. To help you find the tastiest plated portions of the plump plant, we scoured the city with aubergine on our minds.

In the age of the plant-based diet, the eggplant has emerged as the ultimate utility vegetable – able to transform into almost any shape or consistency a chef might desire.

The supple berry has long been a part of the human diet, with the earliest recorded mention of the fruit in the Qimin Yaoshu – a Chinese agricultural text believed to date back to the sixth century.

Over the years, eggplant, aka aubergine, has gone by many names.

In Italy it was given the nickname ‘mela insana’ (a pun on the Italian word for the fruit, melanzana), which translates into ‘mad apple’. Word soon spread that eating eggplant caused insanity.

Here at CityMag, we’re more aligned with India’s affinity for eggplant, where it’s known as the ‘king of vegetables’ for its versatility.

Eggplant is an ingredient that can bend to our whims in many different ways, as it has done in Adelaide restaurants from Chinatown to the East End.

CityMag has compiled the best eggplant dishes our CBD has to offer. 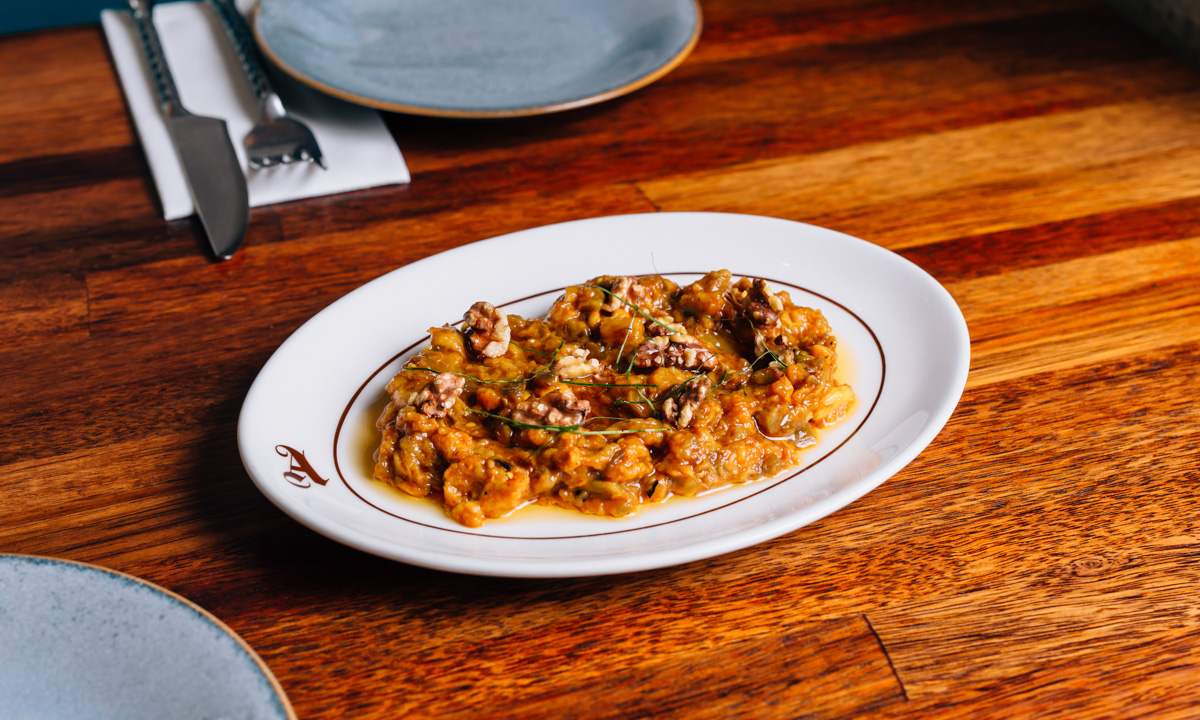 The history of eggplant dishes at Africola is long and lauded. When CityMag visits, a reddy-orange gloop emerges from the kitchen on a small dish, walnuts sprinkled over top, partnered with a dense flatbread. It has a similar consistency to the eternal Parwana banjan borani. There is a hint of spice heat throughout, though very mild.

The entire experience is a play in subtlety, right up until teeth crunch against the walnut in the most satisfying way. It’s a rookie error to opt for the convenience of slathering the delicious paste over the top of the flatbread, as once the meat of the fruit is gone, the plate is primed for mopping. 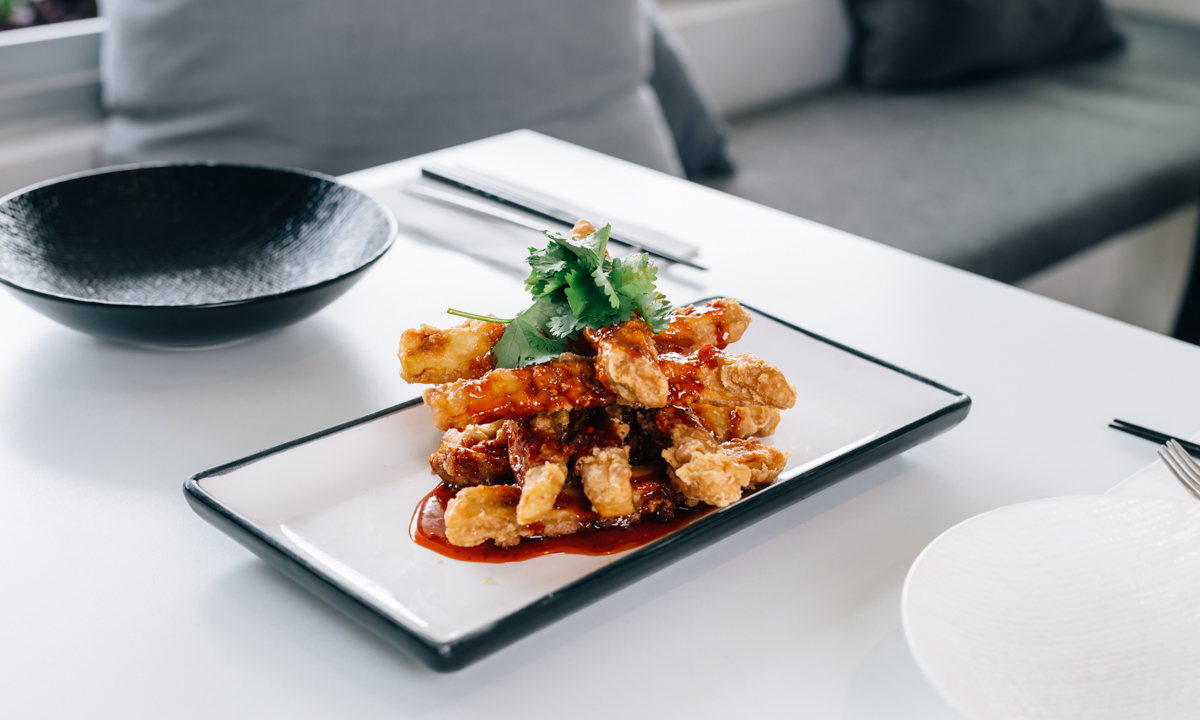 Bai Long’s owner, Jerry Chua, describes his restaurant’s eggplant dish as designed to be “the firecracker to start your experience.” And so it is.

The batter is made from Guinness (Jerry’s favourite beer), plus a mix of a couple of other brews, but the real fizz comes from the Chinese-Korean caramelised Sichuan sauce. The thin strips of eggplant are stacked in a cross-hatched formation, with plenty of the sticky sauce pooled onto the plate.

Each piece of eggplant is thick, juicy and easy to bite through. The batter, too, carries some of the eggplant’s juiciness, being a crispy but not crunchy experience. 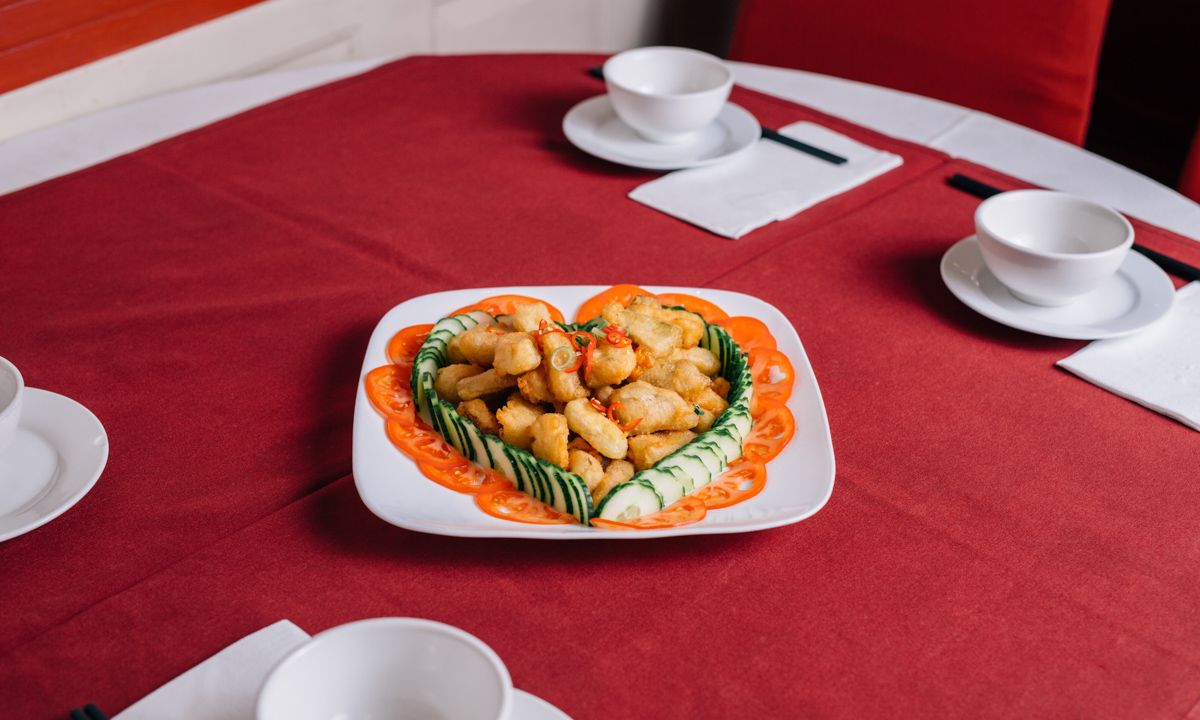 With carpeted floors and linen-dressed tables, Ding Hao is the antidote to a lot of the misgivings about Adelaide’s newest and most-hyped eateries. It is traditional, consistent, and, with most hard surfaces appropriately softened – quiet.

In the entirely opposite sense, Ding Hao’s salt and pepper eggplant dish excels for its unreserved nature. There are some humble elements – the dish is presented on a thin bed of shredded lettuce, no sauce laid on top (or offered as a side, unless you ask), and the batter only offers a muted crunch. But as the plate hits the table, there is a heavy waft of garlic, and the five-spice salt is mouth-watering and -puckering all at once.

People with an aversion to garlic, or to the smell of garlic, will want to give this a miss (or dine alone, as CityMag did). Otherwise, just make sure you have no important meetings later in the day (personal or professional). 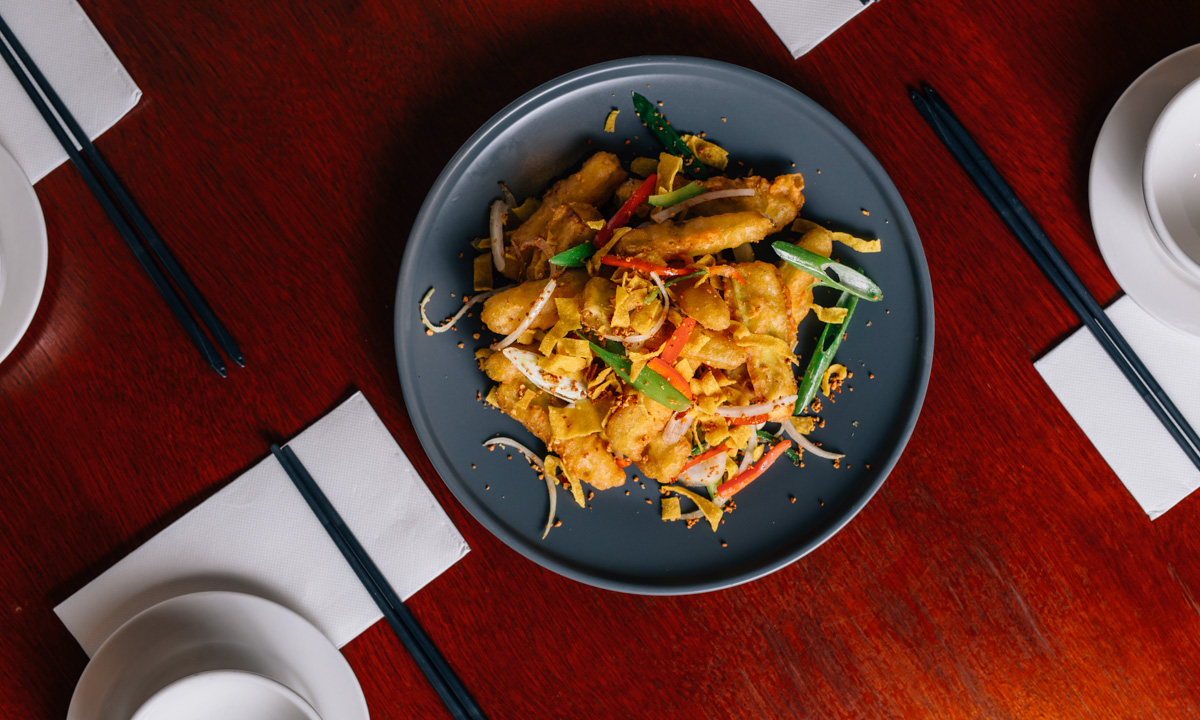 Michael Vuong, owner and chef at East Taste, says he’s responsible for bringing salt and pepper eggplant to the city 15 years ago. The recipe is his legacy.

“Some of them started copying us about eight years ago,” Michael says with a smirk.

East Taste’s salt and pepper eggplant is a plate of roughly two-inch-long, lightly battered eggplant, garnished with raw white onion slivers and deep-fried wanton wrappers. The meal is the apex of taste and texture – not too salty, nor too dry. It is also the perfect medium between hard and soft – whatever the eggplant version of al dente is.

We can understand why Michael’s recipe took off. 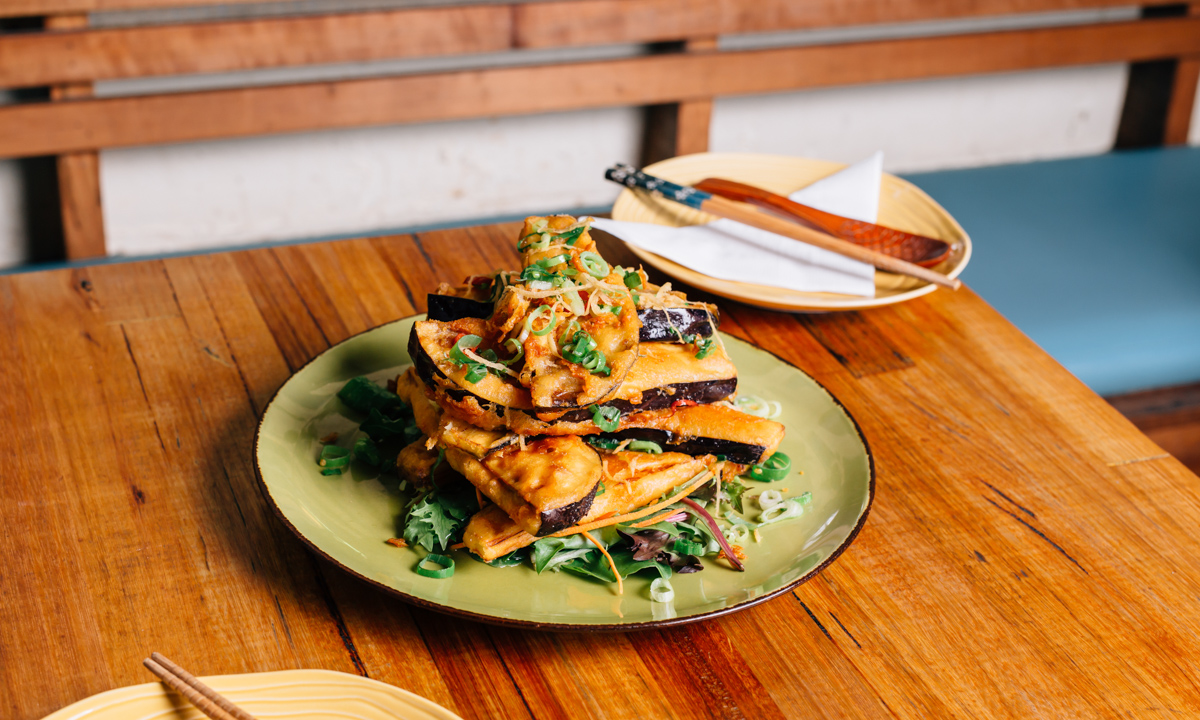 Gondola Gondola strays from the long, thin and rectangular salt and pepper eggplant standard, plating up thin slices of halved eggplant – with skin left on.

Once delivered, the plate is stacked intimidatingly high. The Gondola table is set with several cutlery options, but the eggplant itself is so tender, you can split a piece in half, skin and all, solely with chopsticks.

The batter is crunchy and sweet, and the salad is dressed with a spritely fish sauce, making the dish entirely idiosyncratic. There’s a bit of heat there, too, if that’s your jam. 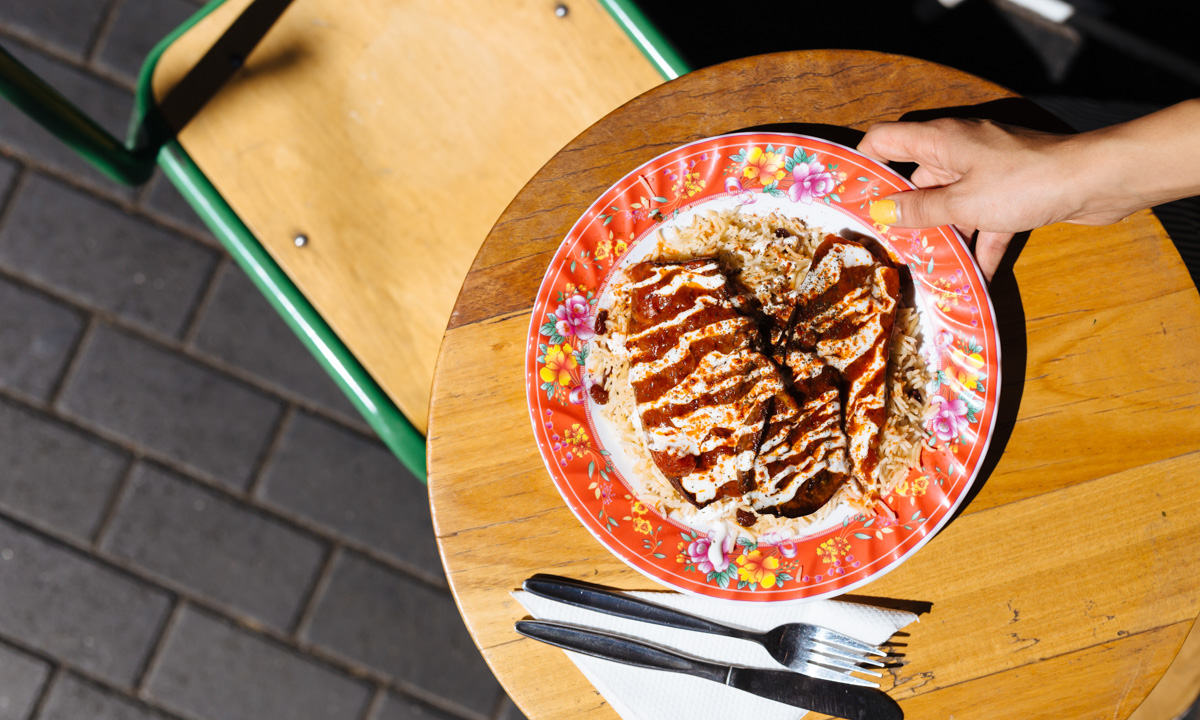 The Parwana eggplant dish is as close as CityMag may ever come to an experience of god. Even this writer’s visit to Rome in the Jubilee year, and a pilgrimage to Taizé in France, pale in comparison.

As you bite and chew this dish you’ll see through the thin veil of our mortal world and be transplanted into an alternate reality where solids are syrups and slurping is actually how you chew.

This dish alone could draw Muhammad to a mountain, but thankfully we only need walk to Ebenezer Place. 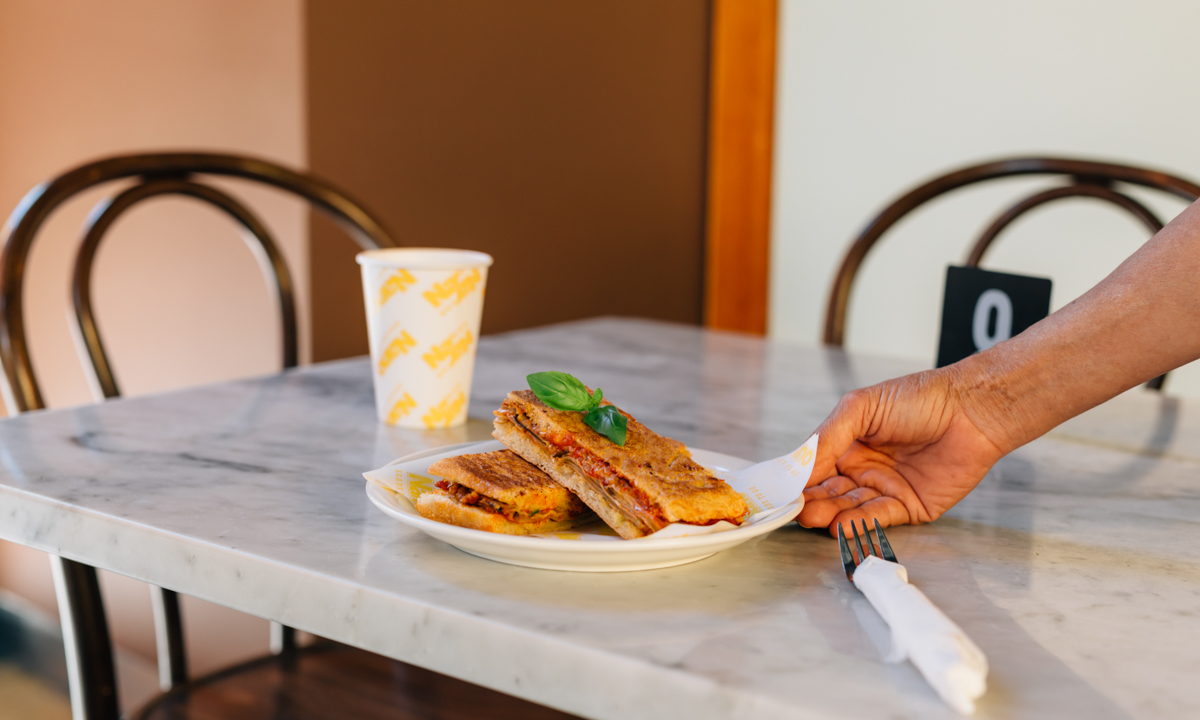 When you can order a vegetarian meal that’s just as good as any meat option on the menu, you probably should – for your health, the environment, and because vegetables deserve to die.

The eggplant parmigiana ‘Nano stick’ is a Michelin-star sandwich at a tuckshop price. I’ve eaten this sandwich so many times, and each time I’m compelled to stop eating, hold it up to eye level and try and see what exactly chef Stefano Capoccia has done to make this rubbery plant so goddam delicious.

Order it toasted and eat it there – it’s best fresh off the hotplate, with the number one nap sauce in the city and melted cheese, crumbed and slithered eggplant, and added crunch from the toasted, house-made and mouth-shaped bread stick making this meal a completely mythological experience. 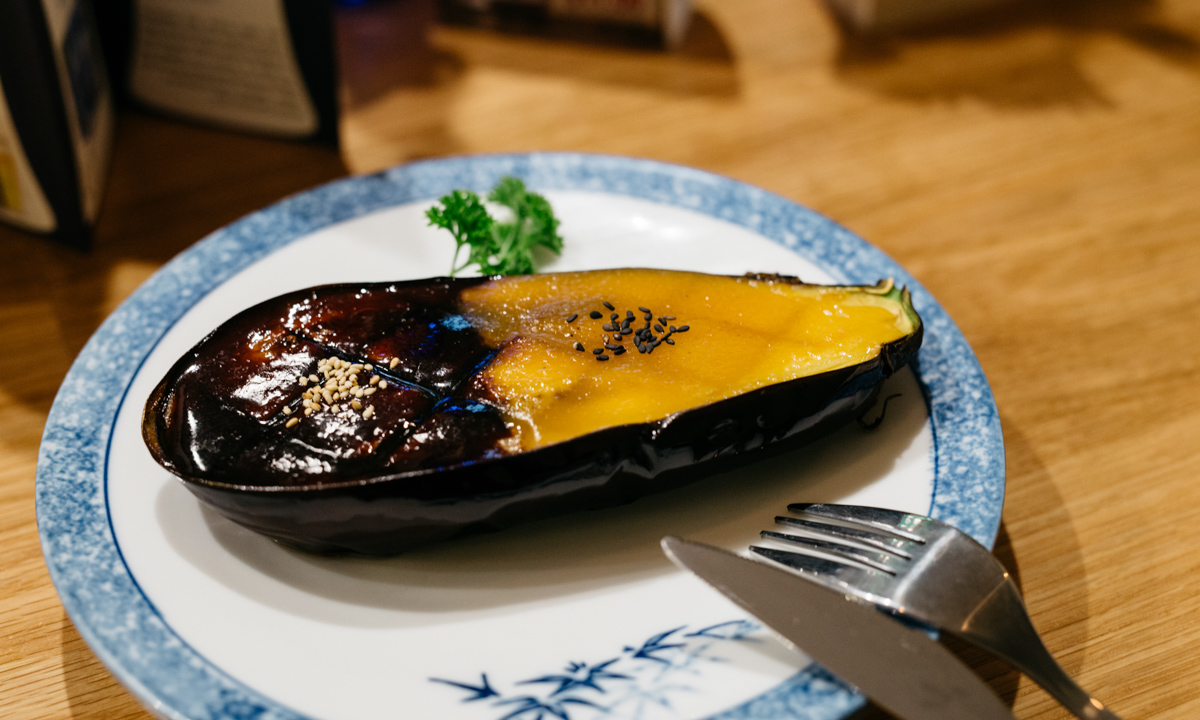 The eggplant’s skin is a controversial beast. Some hate its toughness, others like the challenge. Nishiki’s nasu dengaku (roasted eggplant smeared in a sweet miso glaze) is prepared so well even its casing is no longer contentious.

The eggplant is sliced in half and scored roughly four times down the length of the body and four more across its width. The lacerations are smeared with a layer of sweet syrup and sesame seeds, which permeate into the flesh. This eggplant is charred but not burnt, sweet but not sickly. 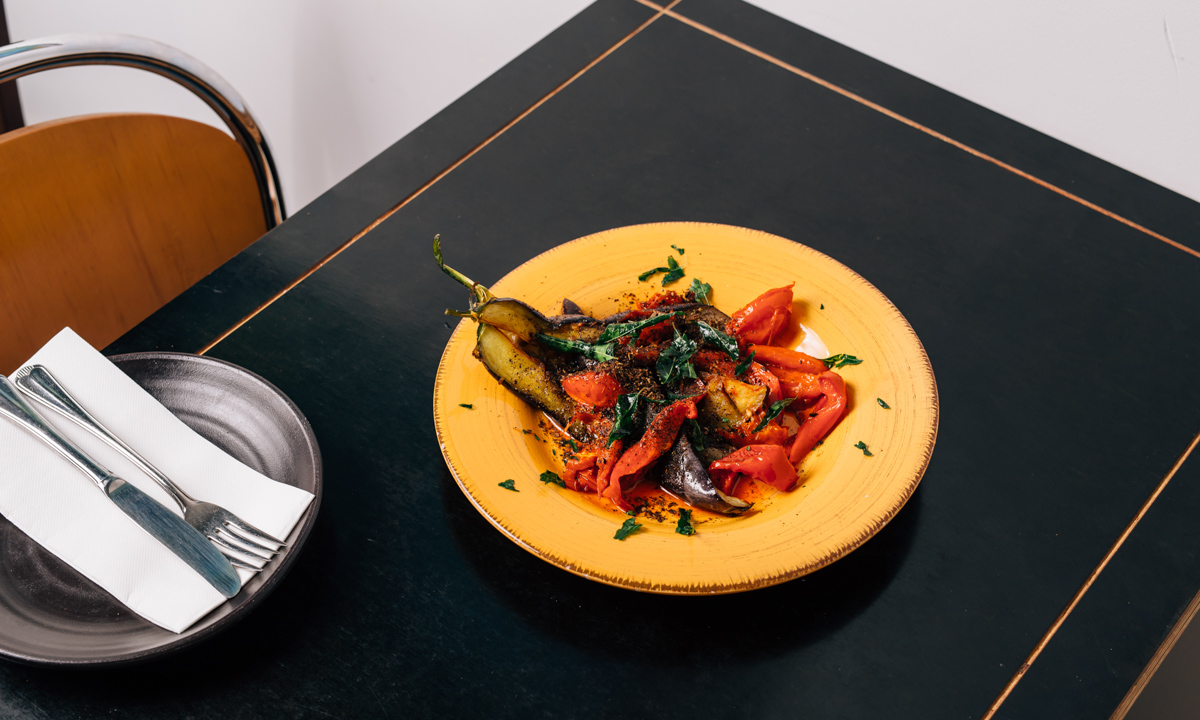 Ragini Dey is a master with spices and her fried eggplant dish is a great example. Not only is the dish a beautiful mess to behold, the flavours are a balanced cacophony – organised chaos of the most delicious sort. There is curry leaf, tamarind and palm sugar, amongst a few other additions, we’re sure.

The eggplant is marinated before being fried in mustard seed oil, with the result is a soft flesh and easily sliced skin. If you like heat and you ask nicely, Ragi might swap out the capsicum for chilli for added kick. 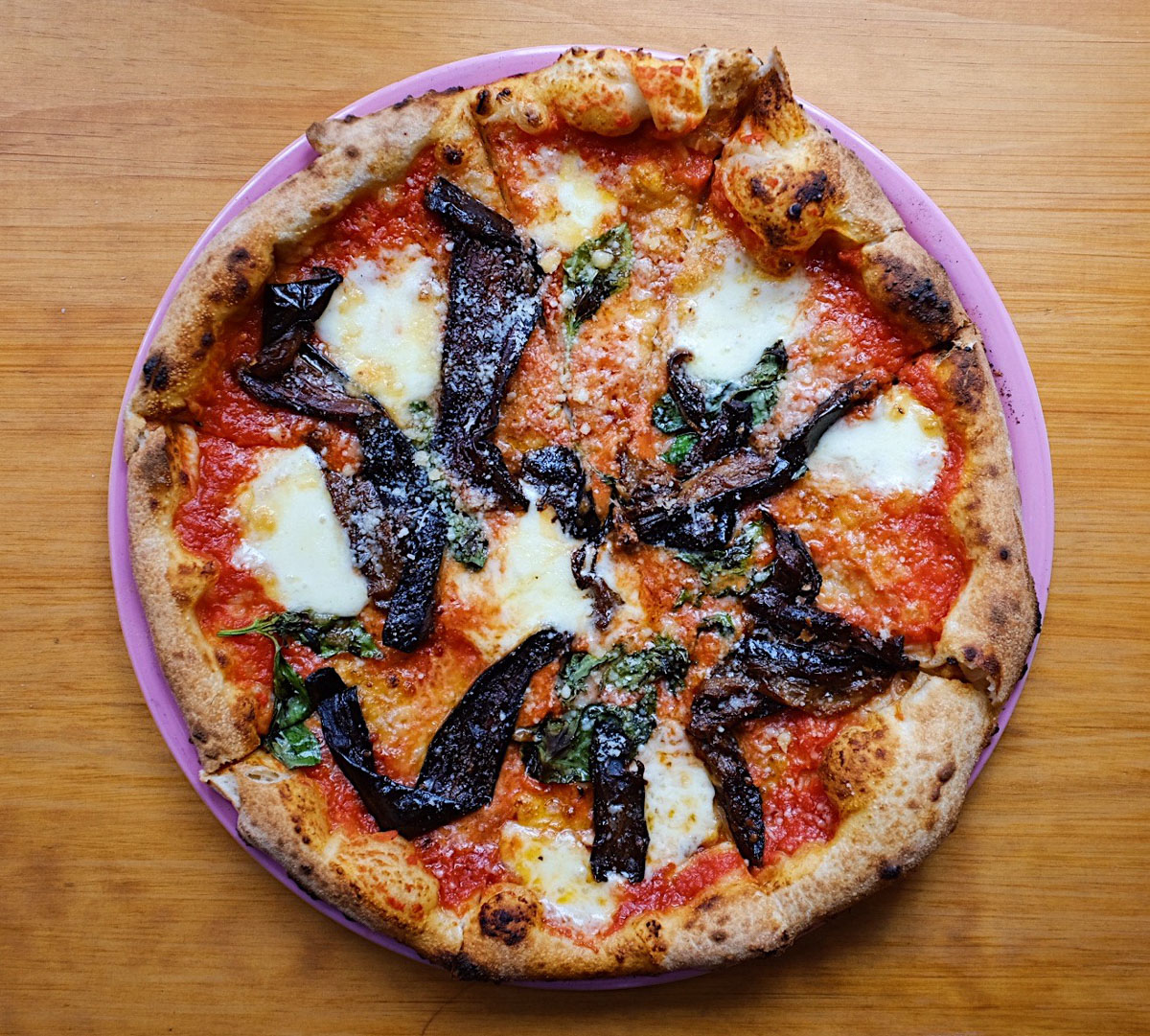 Sunny’s eggplant parmigiana is an all-time top three most-ordered pizza. This visit is very late in CityMag’s aubergine adventure across the city, but still the very eggplanty aroma wafting from the doughy disc manages to induce salivation.

Thin slices of skin-on eggplant are draped across the pizza, with the dual parmesan and smoked scamorza cheese profile replicating the richness and mild bitter flavour of the eggplant itself. The flesh is easy to tear through with teeth, so don’t be concerned about biting into a slice and accidentally dragging all the toppings off in one unfortunate fell swoop. 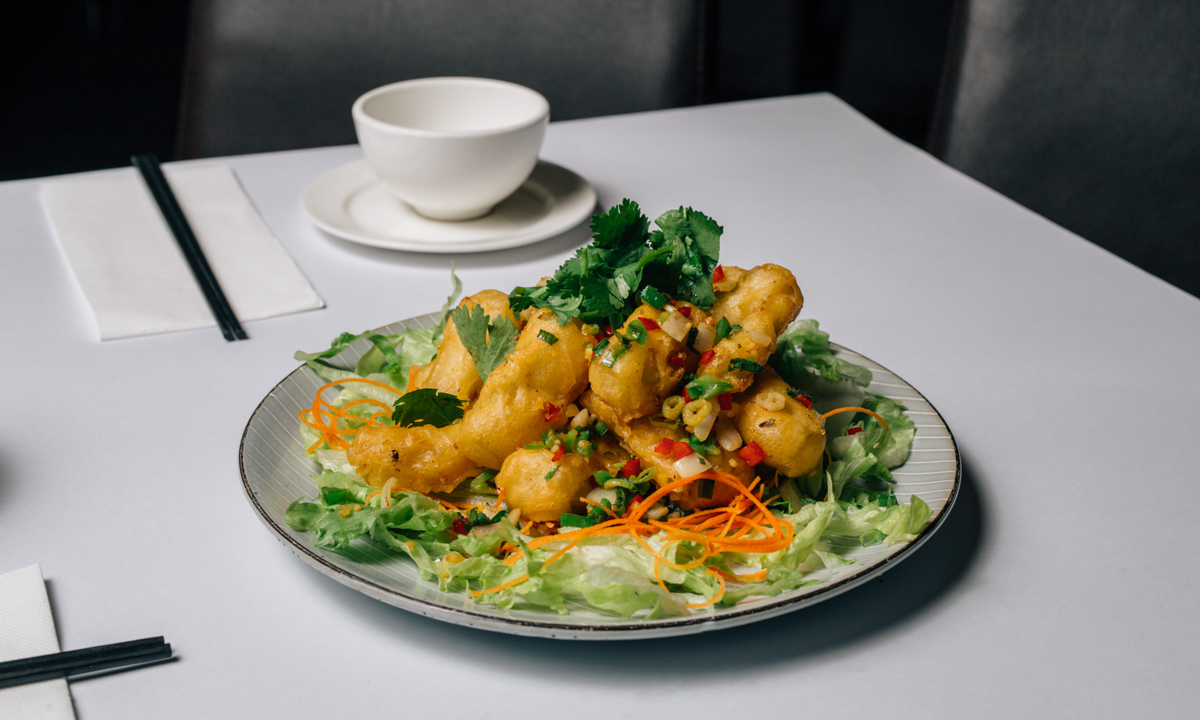 This tasting is CityMag’s first time eating at T Chow alone, and the first time we noticed the wall-mounted television running tourism advertisements inside the restaurant. Barely a moment after giving our eggplant order, it arrives at the table, such is the speed of T Chow’s lunch service.

Juicy eggplant is coated in a fluffy, crispy, deep-fried batter, sharing a similar consistency with soft-shell crab. Small and stout pieces are piled high on top of a salad of shredded lettuce and carrot. Miraculously, the lettuce keeps its crunch ‘til the very end and serves as a fresh and welcome reprieve.

Deep-fried food can often induce heavy lethargy, but T Chow’s batter is light and airy, the eggplant succulent, and the garlic and spices, while strong in aroma, arrive soft on the palate. 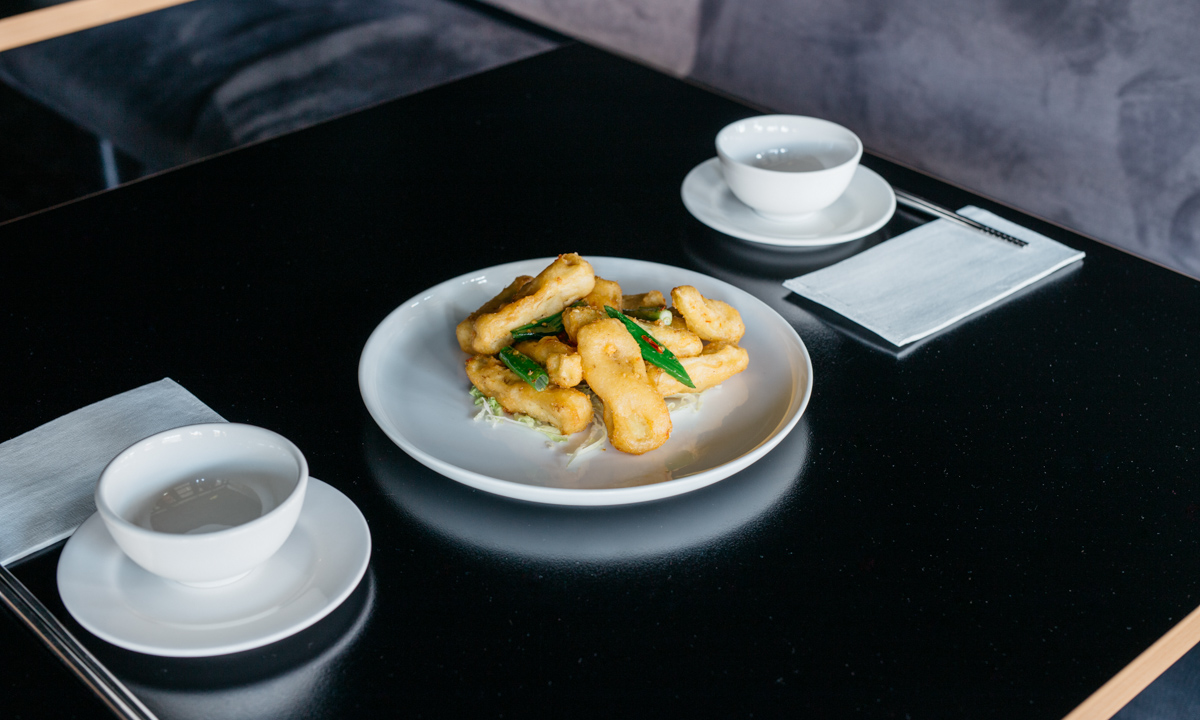 Where most of the salt and pepper eggplant dishes CityMag tasted during our tour opted for chip-like cuts, Wah Hing leans more toward wedges, with thick crescents encrusted in golden batter and laid atop salad, within which lies a heavy kick of chilli. Chilli seeds are dispersed across the eggplant, so there’s plenty of kick in the main event, too.

The batter is thin, almost non-existent on some pieces, leading to a batter with a satisfying crunch that almost immediately melts away. Wah Hing’s take on salt and pepper eggplant proves that despite the dish being ubiquitous (and ubiquitously delicious), its brilliance comes in myriad minor deviations. 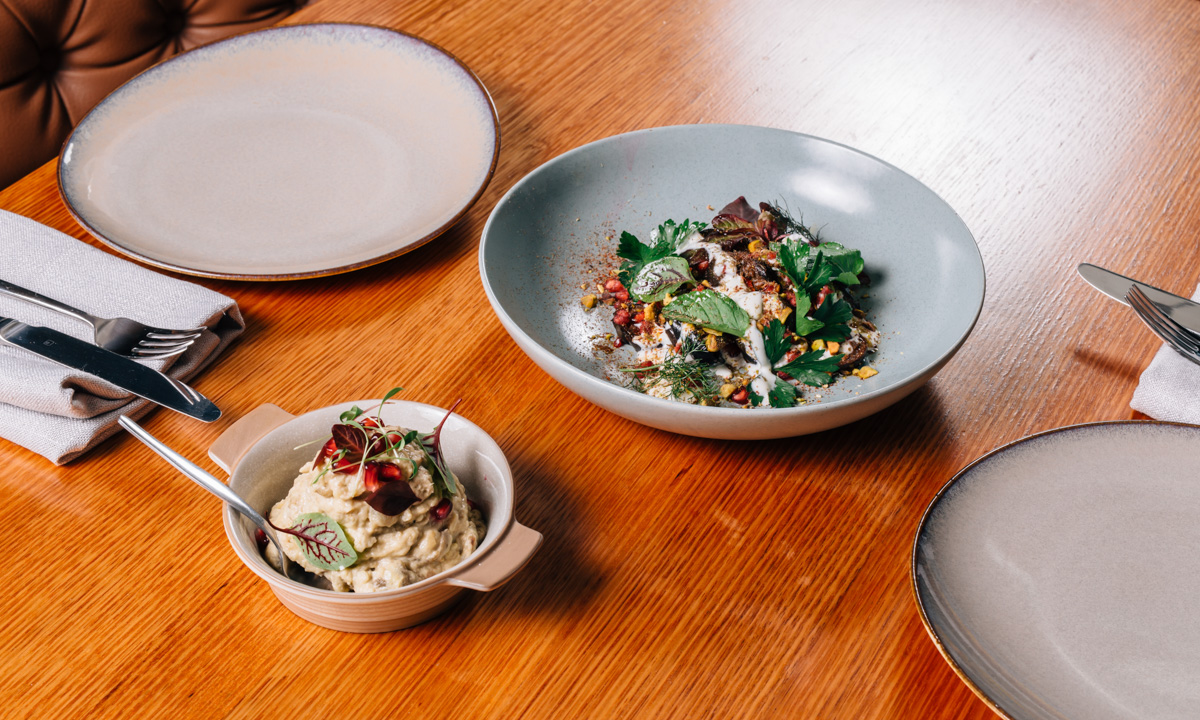 This Mediterranean East Terrace eatery is an eggplant twofer: the menu spruiks two sides made from our favourite fruit, both cheap and both delicious.

The baba ghanoush comes to the table with two pieces of puffy pita, fresh out of the wood oven. It’s mildly bitter, with lemon and tahini cutting through, plus the occasional bright burst of pomegranate seeds. Where many similar dips are whipped into a fine paste, the Yiasou take is fibrous, retaining some of its original form (though not much).

Save some bread for the spiced eggplant though, which is presented as soft, roasted discs topped with tangy spices, spinach and pomegranate seeds, all sitting on a serving of yoghurt. Use your pita to mop up the leftover yoghurt, which will mingle with the spices of the eggplant. 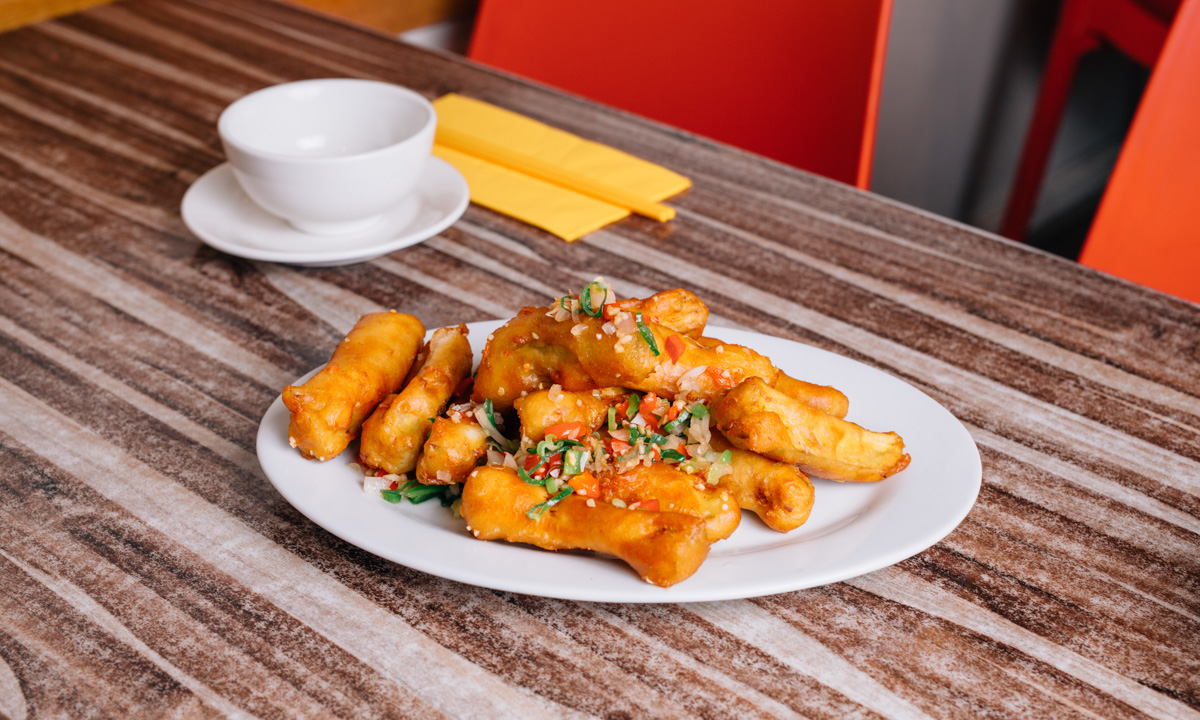 Normally you’d visit Ying Chow on Gouger Street for their crispy shallot pancakes or their BBC after a night out, but a Ying Chow underdog dish is their salt and pepper eggplant.

Our serve is comprised of 13 pieces of roughly 8cm-long rectangular eggplant slices, battered in oil, topped with a small mound of sliced spring onion and chillies. The skin of the eggplant is removed prior to battering, so biting into the aubergine fills your mouth with hot, gooey goodness without the obstacle.

The eggplant could use more salt, but maybe its absence allows us to taste the meat more fully.