Ask any jobseeker – the most frustrating part of getting a job in a new industry is the almost economy-wide requirement of at least a couple of years’ experience for seemingly entry-level positions.

Even in hospitality, the saving grace of any low-income, university-attending worker, the pathway to joining a café crew – once you’ve passed the age of government-sanctioned low wages – is more about knowing the right people than demonstrable diligence and work ethic (at least in this writer’s experience).

This is a frustration equally felt by teachers in hospitality training organisations, like Elizabeth Bell at Career Employment Group’s Adelaide Institute of Hospitality (AIOH), who describes the disheartened feeling she gets putting great effort into skilling her young students, only for them to stall at the starting gate when asked about their most recent hospo job.

“I’ve done a lot of training onsite with kids coming up through the ranks, which is why I get really frustrated when businesses don’t take on the kids,” she says.

Elizabeth has been with the AIOH for the last nine months as a front-of-house trainer, following a career that has seen her work in and run cafés, restaurants, wineries and the like throughout Adelaide (including Aquacaf in Goolwa from 2012-2015), Canberra, Western Australia, and for a stint in Europe.

Among the many training programs CEG runs is a certificate II apprenticeship pathway for year 11 students, in collaboration with the Department of Education, which requires the kids do 12 service periods of work experience.

Most of the young trainees were not completing the program because of the work experience requirement.

Elizabeth and the founder of the AIOH, Ben Sharp, decided to create a fix in-house by creating a pop-up café in the laneway next to the school’s Pirie Street building.

The students set up a small point-of-sale desk, some tables and chairs and sold cheap meals to passers-by in the area.

This worked for a short time, but due to the laneway being privately owned and managed by strata, the bureaucratic requirement of submitting a new application for every weekly service became unworkable.

From across the road, Ben saw a vacant shopfront in the UPark Flinders building that backs onto Pirie Street. He made some calls to see if it was available for lease and was put onto Renew Adelaide.

The pitch was a real-world, bricks-and-mortar café that functions as AIOH’s official foot-in-the-door for young hospitality workers coming up through the training organisation.

Renew Adelaide embraced the idea and Elizabeth set about creating the aptly titled café, Across the Road. 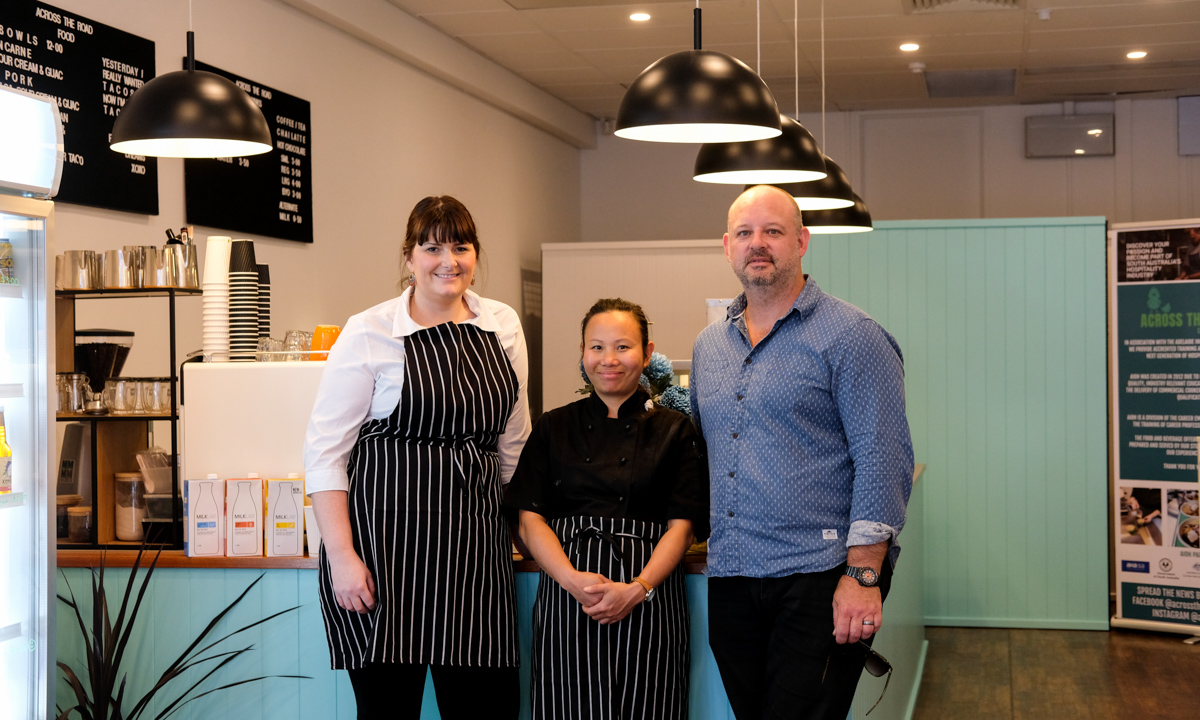 From Monday to Wednesday, the space operates purely as a training space, but on Thursdays and Fridays from 11am ‘til 3pm the doors are opened to the public, with coffee from Altura on offer, as well as a range of Mexican-inspired bowls and virgin margaritas.

“We’ve got a lot of industry experience with chefs and front-of-house, we thought this was a simple, versatile offering. So we can adhere to dietary requirements with vegans, you can have chilli con carne,” Ben says.

“Once we get the systems right, we’re going to start adding some extra stuff. We’ve done some salads, we’ll add some desserts, too.”

As trade picks up and their offering broadens, Elizabeth hopes to extend their hours on both days.

“As we bring on more students and expand with a sweet selection as well, we’ll be able to open earlier in the morning to do morning tea and coffee and afternoon tea and coffee,” she says.

“So ultimately, it would be nice to do 9am until 4pm as well, we just wanted to build up work experience kids and then start working out what kind of food people were interested in.” 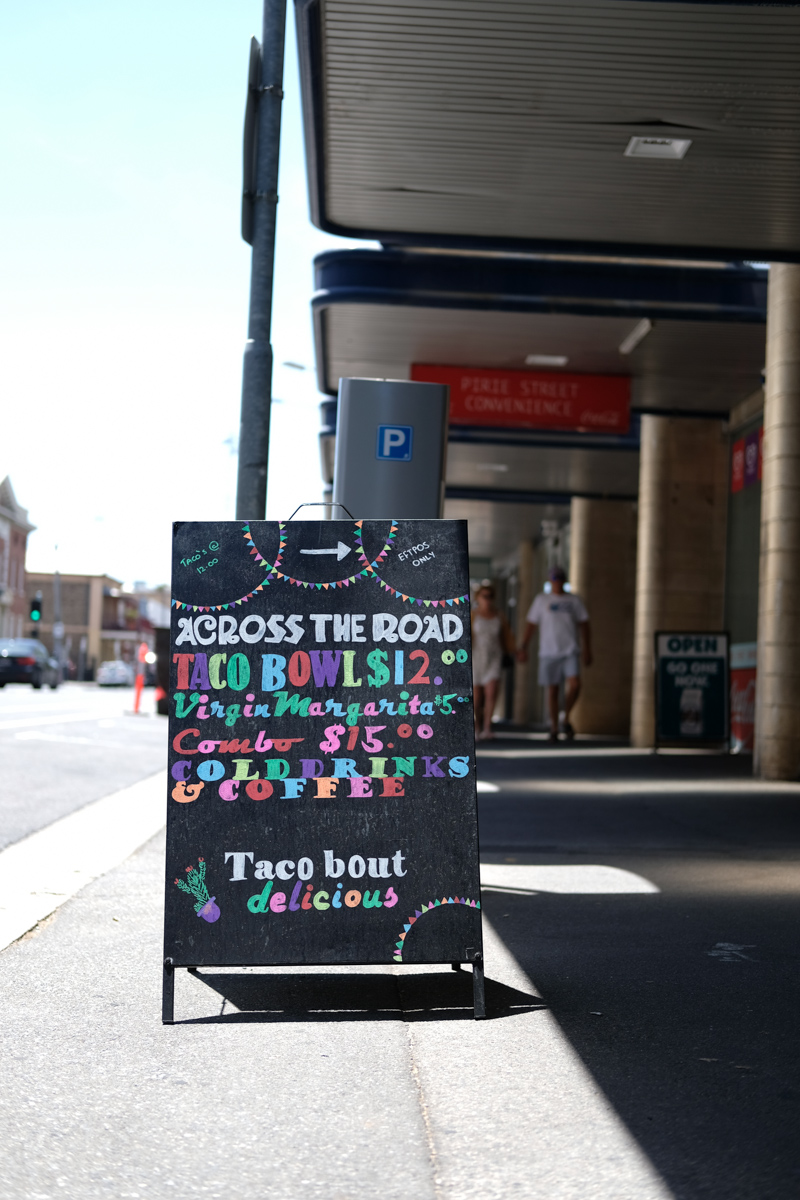 This is also an opportunity for the chefs at the AIOH to prove their skills in the public marketplace.

“At the end of the day, it’s all about the experience you get, and showcasing our students what they can do as well. So they cook all the food over there, they bring it down and serve it,” says AIOH cooking teacher, Keang Ly.

The AIOH was also aware of their neighbours to the east, the café Shake Street, and worked to not conflict with their offering.

Due to the nature of AIOH being a training organisation, every aspect of Across the Road’s bowls have been made in-house.

“There’s still a lot of technique behind it, they’re all sitting there doing the salsa and they’re doing the guacamole, and they’re actually doing the meat dishes, braising and slow cooking. So there’s lots of skills that they practice over and over again, so that’s our staple and it’s doing really, really well,” Elizabeth says.

While this is both a nutritionally beneficial offering and healthy on the hip pocket, the true benefit to Across the Road is the value in helping skill young people in a state with one of the country’s worst youth unemployment rates.

“It’s so nice to have all the students here, because we’re hoping we might have some emergent that might come and do some more hospitality establishments via the Renew Adelaide program,” Renew Adelaide’s Biela McMillan says. 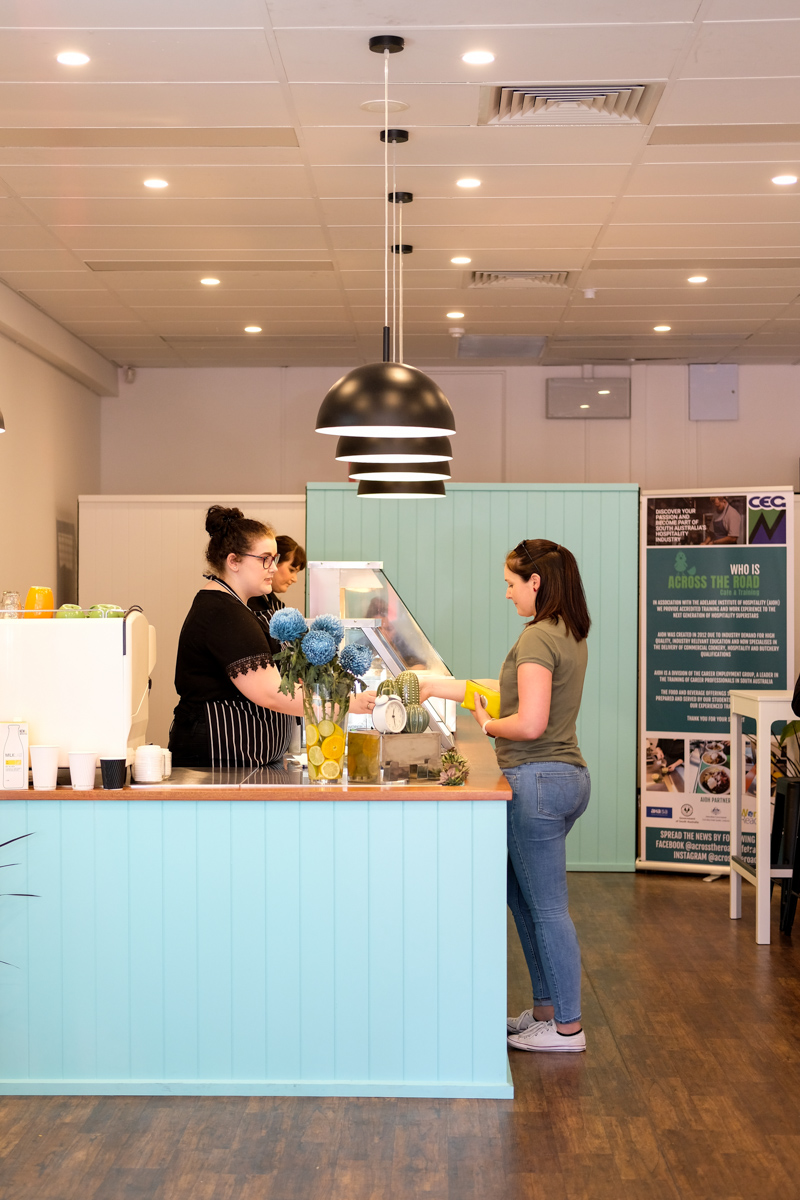