Illustrator Elaine Cheng visits your new favourite burger bar, 127 Days, in the latest of her Famished Fridays series - where she recommends a place for you to visit that could help the weekend arrive a little sooner. 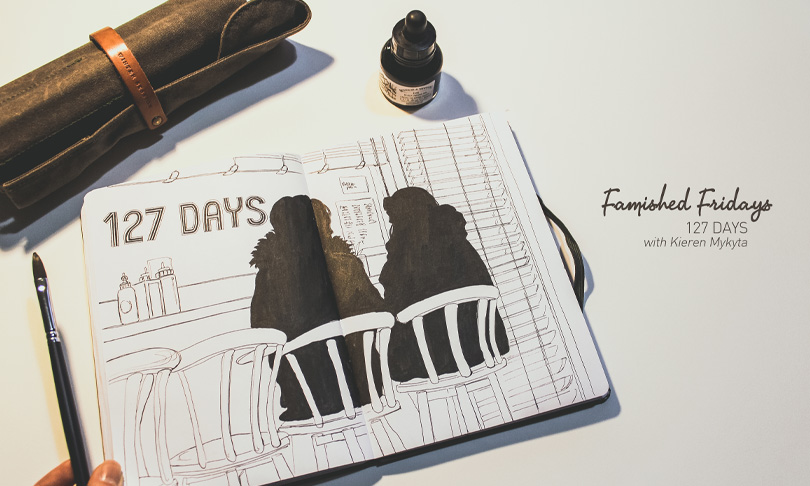 Burgers. If you’ve been roaming the streets of Adelaide, you would have witnessed the flash flood of burger joints in the last year. From American, to Mexican, to Vegan, we’ve all been driving further than the McDonald’s drive-through for the perfect gourmet experience; and Adelaide has satisfied our cravings.

To see more of Elaine’s illustration and read more of her articles visit her blog – Fill Me In.

At 127 Days, Elaine recommends you try The Mushroom Melt, 127 Ways to Die, The Cure, Cheese Arancini Balls and the Hashtag Fries.

Despite the endless options in the city, we always go further up north to one of the restaurants that ventured early into the burger scene: 127 Days.

For owner Kieren, a burger is not just a burger; it’s a rich combination of the finest ingredients, fused together to form the perfect sensation in your mouth. This is coming from a man who has worked for 20 years cooking in the hospitality industry.

“I can’t count how many places I’ve worked for before this,” says Kieren, “Hotel Tivoli, Union Hotel… It gave me a chance to try a variety of cuisines. Italian is probably the one I’ve had the most experience in.” No doubt this understanding has given his burgers a unique twist as he cooks up his every day specials with ingredients such as gnocchi, rosemary pot roasted lamb, prosciutto, and duck egg gribiche, just to name a few.

During his work at the Gilbert St. Hotel, Kieren met his wife, Emily Brown, who worked as a Restaurant Manager for three and a half years at the popular Melt Pizzeria before starting 127 Days with her husband.

“We were about to give up,” Kieren told us, “We’d been looking for a place to open a store for 3 years with no luck, I almost moved up to where my family lives in Queensland.”

When he and his wife came across the location in Croydon, it was a ‘Con & Poppy’s Snack Bar’ that had been run down to the ground. The paint was peeling, the hinges were rusted, the flooring was torn. Nevertheless, he took the shop under his wings, and in just under a month, turned the place into a trendy urban hangout.

They say Rome wasn’t built in a day, but 127 Days’ menu certainly was. Kieren had a clear goal in mind: to make sure there was something for everyone. From the old fashioned cheeseburger to his more refined creations like Squealed with a Kiss with pulled pork and apple slaw, his menu has served him well to this day. After one year of business, the only thing that has changed since the opening is the addition of The Mushroom Melt.

“The Mushroom Melt was a one day special I offered. After it received a 9/10 score from The Best Burgers in Adelaide, our business boomed overnight. People were begging us to put it on the menu permanently, so we listened.”

Listening to customers, Kieren does best. It only takes one scroll down their Facebook page to see the amount of care and passion that goes into this restaurant. Weekly specials? How about a secret ‘Speakeasy’ burger special that changes every day?

From The Bad Mother Clucker to The Godzilla, the chef has his loyal fans checking in every morning to see a photo of his latest creation captioned with his finest puns. “I have to eat the Speakeasy burger for breakfast every morning,” he said with a chuckle, “So I’m basically on a burger-a-day diet.” If he had to choose a favourite on the menu though, it would always be the daily Speakeasy.

When we asked him about some of the challenges he had faced since opening the business, it seemed like a constant battle, “There’s a tough expectation when it comes to burgers. The base ingredients are expensive, but in the end, it’s a burger. You’re expected to sell them cheap.”

With so many burger joints popping up in the last year during the height of Adelaide’s burger craze, Kieren admits that if he had bought the store now, it wouldn’t be a burger bar.

Nevertheless, 127 Days has faced the competition with open arms. The store is packed to the brim every lunchtime, the number of times the restaurant has sold out on a Friday or Saturday night has driven regulars into the habit of ringing up to place an order.

“Our buns are made fresh every day,” he said, “We never store any overnight. Some customers don’t really understand this, but I will never compromise the quality of our food. I’d rather tell them that we’ve sold out than give them an experience that isn’t our best.”

Despite the struggles and stress of working in hospitality, Kieren admitted that he had fallen in love with the restaurant and the area. What had initially been something temporary to get by for one year has turned into one of his proudest accomplishments, “I ended up putting a lot more into this than I ever expected. It is my happiest and proudest endeavour.”

“Working for myself has given me the chance to meet so many wonderful people. I’m no longer cooped up in the kitchen, slaving away in the back and never coming in contact with a customer. I used to feel guilty to be at the front, having a conversation with anyone, but here, in my own place, I can finally interact with people and make a connection. It’s made work much more enjoyable. Life is about people.”