“I’m originally from Hong Kong,” says managing director of PixelForce, Hinney Lo. “I came to Australia to study high school when I was 14 years old. It was my parents’ decision.

“It was very scary and lonely. My parents and my younger brother are all in Hong Kong. It was just me, staying by myself in a boarding school on the Gold Coast. In year 11 – two years later – my cousins from Hong Kong came to Australia and they picked Adelaide for some reason. My parents then moved me from the Gold Coast to Adelaide.

“If I went back to Hong Kong I’m not sure I would have been able to pursue my dream job of being a designer because, yes, Hong Kong is not a very creative country. I got a one-year visa after I graduated university, I think they call it a temporary residence. That’s when I began PixelForce, in 2011.

“I rented a house back then and started – like most other start-ups – in a garage. I started to look for jobs, mostly through friends, people that I know. I started doing small jobs, like designing a logo, graphic design, and that’s how everything began. Slowly I built up the momentum and after six months in the garage I decided to get a proper office. I was young – and I wasn’t sure if it was a mistake or an opportunity – but I opened my first office on Hindley Street.

“It wasn’t a great choice. At nighttime, people were drunk, banging on our doors. We work very late and over the weekends, and people would see lights on and bang on the door. It was a bit scary but we got to know some good clients – we picked up a couple of medical projects on e-health records and an app for Wokinabox.

“Again, not myself, but we had software engineers. It was just a team of three back then and one of our employees, Ben [Zhang], now he is my business partner, he taught himself how to make apps and after one year of the Hindley Street lease we decided to move to a quieter office.

“We moved to Norwood. I invited Ben to be a partner of the company because I think we work great together and at the end of the first year in Norwood, we met Tobi Pearce who is now the CEO of Sweat.

“We met Tobi, he came to our office, explained to us what his vision is. His partner, Kayla Itsines, went viral on Instagram. She has a lot of Instagram followers. Their business model was just to sell e-books back then. 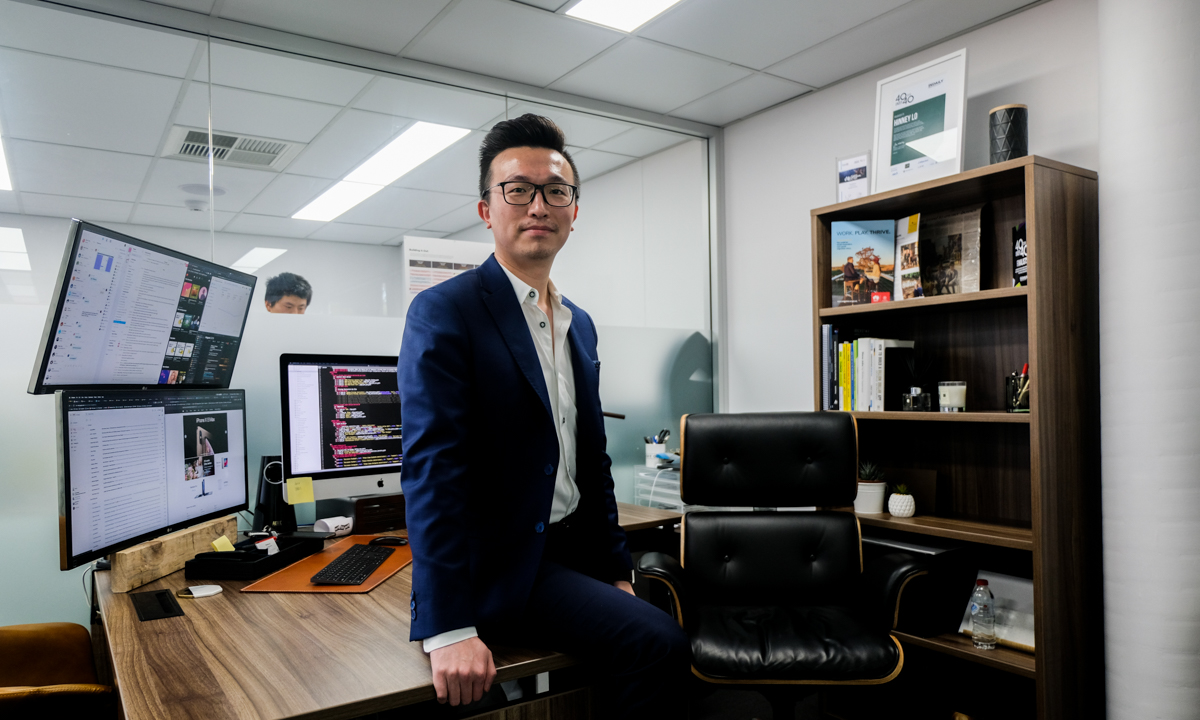 “This project is the biggest one we’ve worked on. Signing up Tobi and Kayla was a big deal to us. We work with them very closely and they were almost 80 per cent of our business back then. From my vague memory they were a company of 20 back then and now they have, I think, 80 staff?

“Because of my background and Ben’s background – both of us are international students and we studied here, applied for permanent residence, and became citizens – we’ve been through the immigration path and we know there aren’t many work opportunities for immigrants, especially graduates.

“The first question I think all employees ask is ‘Do you have working permits?’ ‘Visas?’ Do you have work experience?’ If those are not checked then I don’t think you even get a chance to do an interview.

“So we have been working with some education organisations here in Adelaide called Navitas and Readygrad. We help students learn how our industry works, teach them what the latest programming language is, framework, technology, and we also offer them a position and with that they are able to apply for permanent residence.”