My Adelaide with Jay Weatherill

More than any Premier in recent memory, Jay Weatherill is attempting to craft a legacy by making changes within the square mile itself – but pursuing a city agenda in a state steeped in the traditions of primary produce and resources was never going to be easy. 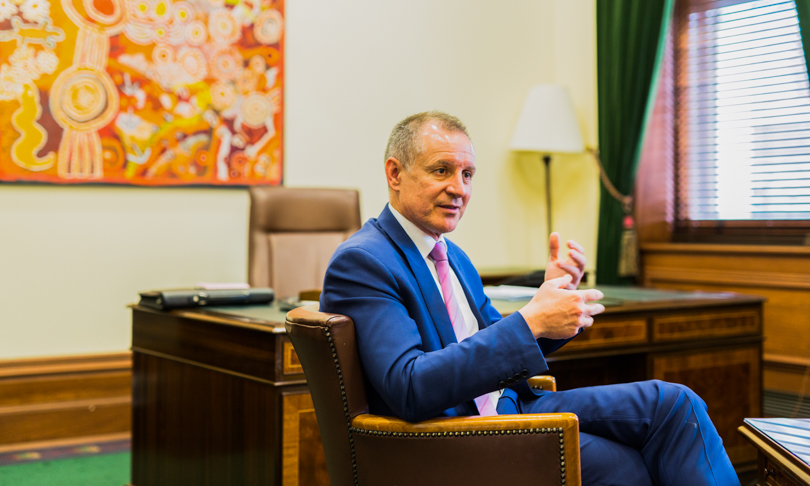 “I think we have to have permission to fail if we’re going to encourage innovation because the two things go hand in hand,” says Jay.

“It’s one of the first things we say in the opening chapter of our ten economic priorities, is that we’re going to try some new things and some of them won’t work, some of them won’t go to plan. But we have to do that if we’re actually serious about the changing environment.

“The media are always going to cover events and failure is an event, particularly when there’s some Government association, but I think the broader community understand and I think they want us to have a go.

“They want us to step up and change things because they appreciate the size of the challenge of the South Australian economy. They know that changes are occurring in the old economy and they understand that will cause friction and dislocation but at the same time it creates opportunity and excitement.

“We think that modern regions – our state – compete on the attractiveness of their capital cities, so we think that it’s a state-wide economic agenda and understood in that way it means you can then build political permission for concentrating your efforts on vibrancy in the city and investing in the city.

“You’re in a media-saturated society where every little region is trying to compete for attention – how do they cut through and get preferenced by the students and businesses and investors and tourists? They have to cut through with an image of what Adelaide is, and that’s what we’re trying to do – we’re using the city as the arrowhead, if you like, for how we promote the state.

“I think it’s probably the single most important challenge, how you change mindsets. I think it’s a momentum play – you have to do something and have people go ‘wow, that’s good, let’s do more of it’. And I think we’re probably getting there – the Oval was the thing that really changed things on a number of levels.

“One is the Oval is beautiful and it’s always been known as one of the greatest stadiums in the world, so people were worried about us touching it, but we did and we made a great success of it so I think that gave people confidence that you can change old things but protect everything that is beautiful about it – just make it better.

“With that confidence you do the next thing…. So small bars – taking on established interests, obviously the hotel lobby didn’t like them initially but now they are an unchallenged success.

Jay also says the potential for collaboration with Lord Mayor Martin Haese bodes well for Adelaide. However, the Council’s choice to greatly restrict food truck activity – despite the Lord Mayor’s opposition to this rollback – shows just how complex making progress can be.

Editor’s note – At the time of interview, the Premier also said that there was bright potential to work with (now former) Minister for Cities, SA-based Jamie Briggs.

“[The city has] an extra 9500 people since about 2001 when we first started work on population. We’re at 23,000 now but we have a big ambition to grow that to 30,000 and that’s going to be a stretch so we’re using the Capital City Committee to talk to the Council about how to accelerate that because we think that’s exciting, the possibility.

“Affordability is a big part of that…so we’re really looking at that carefully and trying to build some policy initiatives around affordability because we think that it’s the mix that makes for an interesting city.

“Adaptive reuse of old empty buildings is very important too.

“Some of the stumbling blocks there are regulations around safety and disability access – things that drive the economics of the equation and become real barriers, but we’re great supporters of Renew Adelaide and they’re doing great things to breathe life into old buildings and old arcades so we’re working closely with them and will continue to support what they do.

“But I think people are thirsty for positive ideas and they’re sick of negativity and other discourse so I think there’s a willingness for us to step up and give it all a go.”