My Adelaide with Gill Gordon-Smith

Gill Gordon-Smith’s heart beats red wine, and whether she’s miles high in the sky or making and selling wine just above sea level in McLaren Vale, she’s always found a way to spread her deep love, respect, and knowledge of the vinous craft.

“I actually started when I was 15, illegally working at the Settlement Wine Company in McLaren Vale,” Gill Gordon-Smith laughs, “I was their cellar door girl.”

“I went to uni and did wine marketing, and I was Vincenzo [Berlingieri]’s cellar hand, as well as Alison [Jane Hodder], the winemaker’s vintage cellar hand, and then I went into teaching, and I just got fed up and went flying, because I split up with someone.

“I was a hostie for 20 years and I basically commuted from here to Sydney and flew out of Sydney internationally.

“I went around the world drinking. I call it the QANTAS scholarship, because I got to go to every major wine region, for 20 years, at least twice a year… I developed their Sommelier in the Sky program, because my background had always been wine and teaching.

“Fall From Grace opened in February 2010… The reason I started the shop was because I started to drink natural wines 20 years ago in London.

“I would ring up Caves de Pyrene when I got to Singapore… order six wines and go ‘can I have them at the hotel when I get to London?’

“I’d get into London and there’d be a delivery for me, and so I’d have all the crew in my room having a drink.

“I went around the world drinking.” 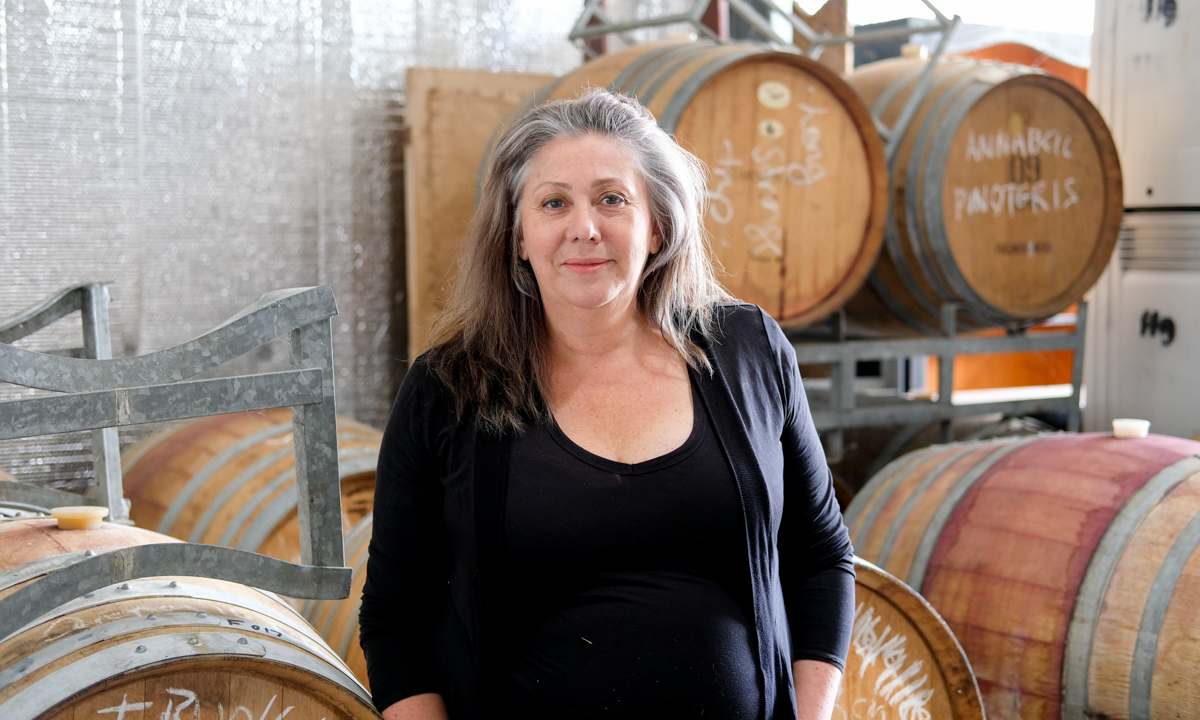 “That totally inspired me to bring some interesting low-intervention wines to McLaren Vale.’

“I wanted to start teaching WSET (Wine and Spirit Education Trust), which I’m qualified in, and I also wanted to have a place that young winemakers could come and benchmark what they made here against some of the more interesting wines in the world.

“I always had [being a winemaker] in the back of my mind, but because I didn’t train as a winemaker I just sort of put it aside. Then… I met James Erskine [of Jauma], basically.

“He said ‘I want you to be part of the Hot 100. I know you love natural wines, and we need more women, and we need people that are really open-minded,’ so I jumped on board.

“The first year I thought ‘ok, we’ve got these natural winemakers coming up, not all of them are trained winemakers,’ and I thought ‘I’m going to make some wine.’

Gill runs a winery, a cellar door, wine education, and wine imports under her business name, Fall From Grace

“The natural wine movement gave permission for people to come and do things in a different way, and I’d always been interested in how Italians made wine, and making wines by the cycle of the moon, and biodynamics.

“I wanted to make wines you can drink every day, that aren’t intimidating, you don’t have to have a special occasion, you can just crack the top, drink them, smash it and enjoy it.

“I think culturally we’re looking for wines that aren’t just fruit forward and fruit bombs. We need to add other layers into our artillery. We need to have things that appeal to a broader range.

“It was such a big movement that was happening overseas, and it was just exciting. It’s almost like when you have a new art movement come through and it’s a push, you know? It was pretty crazy at first.

“I think the reason natural wine, or minimal intervention, is resonating is because we’ve gone so far down the other track with technology that people now are looking for connection; connection to the winemaker, connection with agriculture, connection to sense of place and the soil itself.

“I’d like to go and make montepulciano in Abruzzo, and I’d make nero in Sicily, and bring them back. That would be the next step. I don’t know.

“I love Italy, it feels like home, but McLaren Vale will always be home. I’ve always loved our grenache, I love the community, they’re pretty straightforward here.