My Adelaide with Driller Jet Armstrong

Record label owner, writer, DJ, visual artist, founder of the Daubist art movement and co-owner of late night hedonist hotspot Sugar, Driller JetArmstrong’s life is split between the quiet of his Adelaide Hills home and the larger-than-life persona he pulls on as he heads to the city after dark. 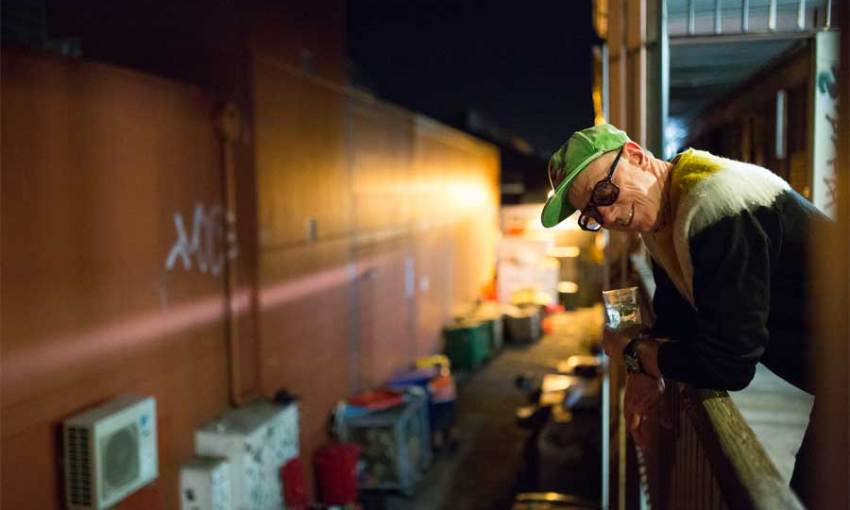 “The two extremes of my life could not be more different. The city is all about being with other people and the house in the hills is about me time – time spent alone with my wife, time spent with (my pet owl) William Henry, time spent being creative in the studio, time spent in the garden, reading, listening to new music, cooking lovely food, and entertaining friends and overseas visitors.

“I am the son of 10-pound pommie parents who migrated to Australia in 1964 when I was a mere slip of a boy – aged 7-years-old. “I’ve never felt the need to leave Adelaide, perhaps because I wasn’t born here. I find generally that people from Adelaide who bag this city have never left it and people from interstate who bag it have never been here. You can be whatever you want to be right here. Although I do think it’s essential for people to travel and experience the world beyond not just Adelaide, but outside of Australia as well.

“I am one of the founders of Sugar, which opened in 2002. Having said that, many people above a certain age will remember that it was also a nightclub by another name – Q – for years before we took over.

“Sugar’s culture is quite unique in that it is one of only a few clubs left in the world which is based wholly and solely upon the ideals of David Mancuso – he started The Loft in NYC. Sugar embraces everyone who is there for the music, for the dancing and for the fun to be had with like-minded people.

A well-stocked bar is a good bar

“I DJ at the club on Friday nights and I am generally always there whenever we host an international artist at the venue. I like to pop in on random nights to see how things are unfolding and sometimes I go to let my hair down and to try and forget about the crap. The new stupid lockout laws have greatly affected us, as we are really the only late night venue in the East End. The Government seems hell-bent on making it very difficult to conduct our business and that in itself is stressful and worrying.

“Almost everyone I bring to town – visiting artists and musicians, they briefly imagine themselves living here. They often liken the city of Adelaide’s architecture to that of mid-west America. They all love to visit Cleland Wildlife Park, without fail, and they often remark how much they prefer Adelaide’s vibe to Sydney in particular but also to that of Melbourne. A lot of that has to do with the people they meet at Sugar, I think.

When Driller is in-between club and home, he stops in at Gouger Street stalwart Star House for some Yum Cha, wanders past Transition Records on James Place to feed his vinyl addiction and talks shop with the guys at City Skoots.

Sugar has recently announced it is no longer viable to open on Mondays and Tuesdays, which is a heavy blow for late-night Adelaide.

“Adelaide is definitely going places. The fact that Lonely Planet named this city as one of the top 10 destinations for 2014 says it all really. Having said that, there’s a lot of things I would change if I could. Mad March, for instance, is a nightmare. There is no way that I’d have the car race culture sitting within the art events that take place in March. Whoever thought that was a good idea is an absolute moron. I wish we had more people like (Mayor) Stephen Yarwood! There, I’ve said it.

“I think people are screaming out for innovation. For instance, why don’t we have a massive solar plant in the middle of the outback to power all of the state’s electricity needs? It’s no wonder the car industry has disappeared from our landscape. The reason is simple – it failed to innovate. Government should do more to back the ideas of its constituents.

“The only people that inspire me apart from my wife are young people with fresh ideas. Young people don’t see barriers, they only see opportunity. They don’t ask ‘why?’, they ask ‘why not?’.”