The incredible merit of holding your ground 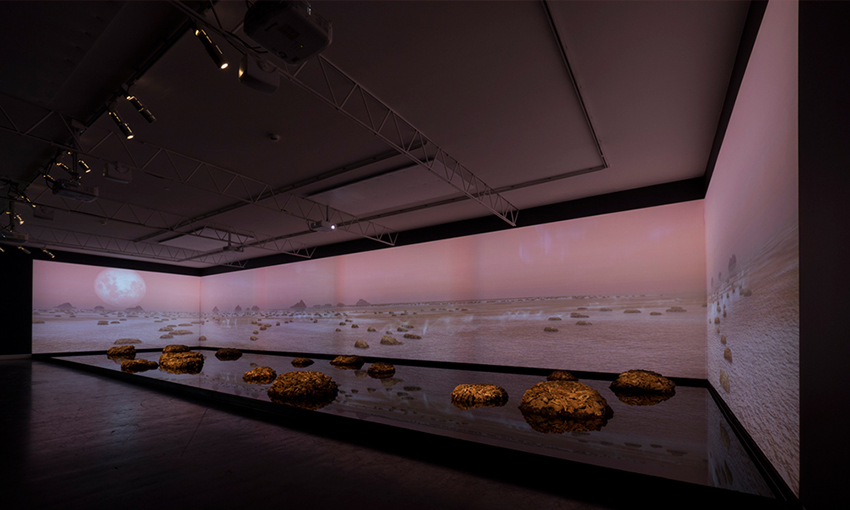 Microbes are meant to be tiny – these ones look like boulders. And these boulders breathe.

Thrombolites and Stromatolites are the first living organisms on the planet. They are imagined to have first popped up in shallow, lake-like environments more than three billion years ago where they set about building a steadfast community of structures that would eventually breathe oxygen into the earth’s first, noxious (to life) atmosphere.

James Darling and Lesley Forwood are artists and they’ve been on a journey since discovering the colony of thrombolites in the state’s southeast last year.

“We were absolutely bowled over by them,” says James.

CityMag is with James and Lesley, shrouded by darkness in Hugo Michell Gallery on Port Rush Road. The lights are low to let the 17-metre projection on the gallery’s north wall capture our attention. Meanwhile music soars and seeps, crashes and disipates through the many speakers synced up across the roof, making James and Lesley’s words feel all the more significant.

Working with mallee roots felled on the pair’s property over 20 years ago, James and Lesley have collected fragments of mallee and sculpted them into the depressed, the bulbous, the spherical and the undeniably sturdy shapes of thrombolites. They have then submerged these wooden sculptures in gasoline-dark water, which acts as a mirror for the wooden sculptures and the 17-metre projection which expands the artists’ vision to the relevant vanishing points on a horizon billions of years old.

“When we were looking for images of three billion years ago – we could only find one from the Smithsonian Library in Washington (DC) and it looked like a sort of comic strip idea,” says James.

“There was nothing. Sounds of three billion years ago – there’s nothing. So it’s a building up from very little, the fragments of what’s dared to be visualised about the universe,” James says.

But James and Lesley aren’t just making their pre-Triassic landscape up. They’ve consulted heavily with professors around the country – Bob Burne at ANU and Malcolm Water at UNSW among them – to get the best possible description of what Earth and the area that may now be understood as the Limestone Coast might have looked like.

“The sky is pink,” says James continuing, “the sun is at about 70 per cent of its power. The moon is much closer. The sea is between 60 degrees and 80 degrees celsius. Hot! There was no land mass except for archipelagos.”

Jumpgate VR, has generated a landscape spanning 3 billion years (pictured). ‘Living Rocks: A Fragment of the Universe’ also features an original score composed by Paul Stanhope which has just been recorded by the Australian String Quartet at UKARIA Cultural Centre.

And standing in the dark at Hugo Michell Gallery you see this horizon take shape as it it morphs and changes and evolves into its present day form. The cycle of three billion years is rendered in 20 minutes, while the sculptures in front of you stay put.

It’s a powerful statement. While our earth was uninhabitable to all air-breathing life, the Earth’s first life made a home for the rest of us by steadfastly staying stuck to their patch of it. Their resilience and their very literal permanence serves as an anchor for our otherwise fragile ecosystem.

The artistic statement of James and Lesley’s work can be found in this contemplation too.

While we humans hurriedly migrate, leaving ‘home’ building ephemeral notions such as a career, success and an economy, the life-giving thrombolites stay put – the earth’s ‘default eco-system’.

“It’s what every different person sees,” says Lesley cutting off our misanthropic manifestations.

“We just want or hope to make people think about those eons of time and what we are now and what we are likely to be if we don’t look after the… well, you know,” she trails off.

Standing at the precipice of three billion years of evolution and geology – staring at a work of human imagination like this, you can feel the edges of an idea beyond human comprehension of temporal existence. It almost feels like you can touch a piece of infinity.

Life isn’t lived on earth. We aren’t on top, over or above anything. We’re right in the middle, mixed in with all the other ingredients, a far more fragile part of reality’s manifestation than our ancestors – the thrombolites.