If they can make it there, they can love it here

Two native-born New Yorkers left the Big Apple 21 years ago for work and adventure, but since finding Adelaide they’ve never looked back.

We’re meeting the Keisman’s for a knock-off at Bar Torino on Hutt Street. Arranging a time with the duo has taken a few emails back and forth, an SMS, and a phone call.

Jeremy and Maritza Keisman are a busy couple.

As true New Yorkers, the Keisman’s offered their opinion on our list of Adelaide’s best Reuben sandwiches. We’ve since amended the list to include our glaring omission, thanks to Maritza’s recommendation.

“There’s stuff going on,” says Jeremy. “We’re at a point where there are more meet-ups, and more work going on, that it’s a challenge to schedule it all.”

Jeremy and Maritza recently moved from McLaren Street – just around the corner from Bar Torino – into 36 Hurtle Square.

They tell CityMag how happy they were to snap up an apartment at the time, but have since purchased another apartment – a three-bedroom place – in stage four of the Hurtle & Co development, for the extra room.

“Like Seinfeld, when his apartment window is open?” we ask.

“Exactly. Taxis, trucks, sirens, talking – noise,” Maritza continues. “But this new apartment is so well built, when we close the window or the sliding door, we can’t hear anything,” she says, with a kind of confused satisfaction at the difference between her former life and now. 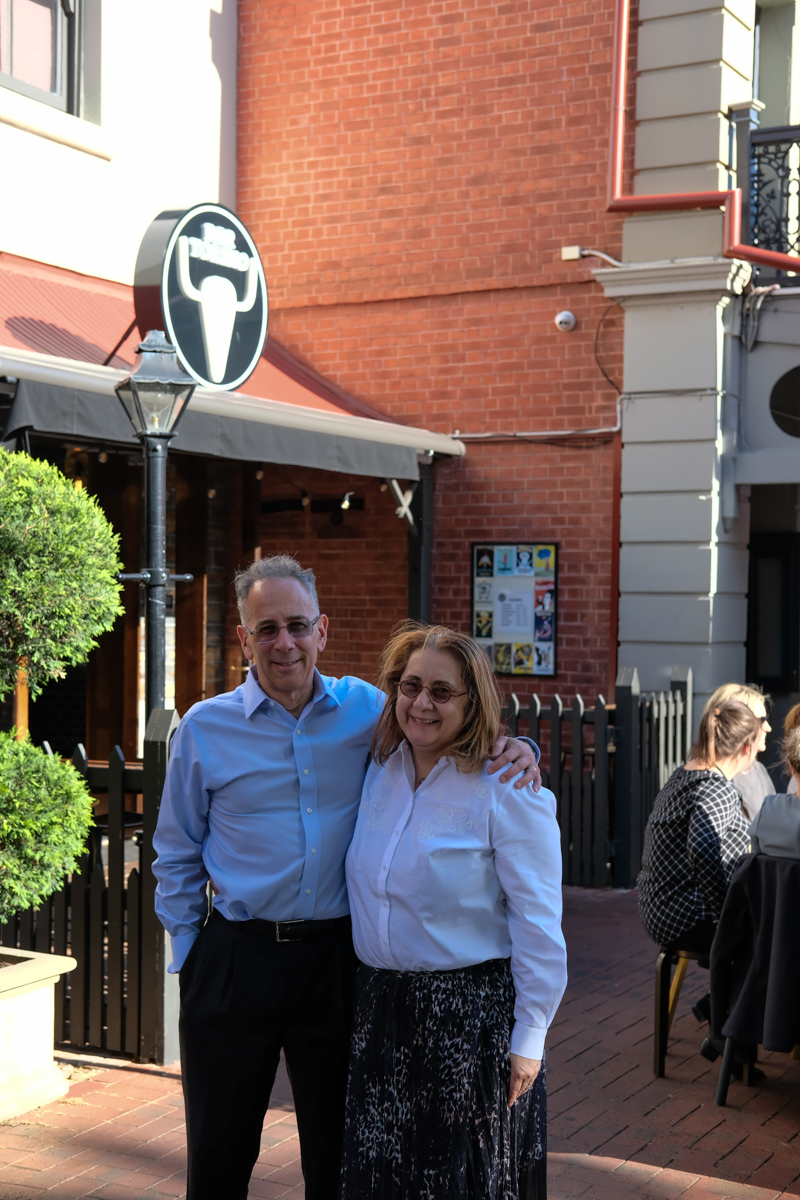 The Keismans outside their local, Bar Torino

The Keisman’s didn’t just land in Adelaide straight out of New York. Jeremy is Manhattan born and raised and Maritza’s from the Bronx. The two met in high school and were married early. They thought New York was it for them, for life. However, a job opportunity in Boston got Jeremy thinking differently about life and opportunities outside the five boroughs.

“I didn’t get that job, but I’d started to shift my point of view, and I was more open. So that when I ran into an old boss of mine and he described a job in Singapore – that I was perfect for – I took it,” says Jeremy.

Obviously Jeremy only took the job after full consultation with Maritza and their 15-year-old daughter, but that started the Keisman’s adventure 21 years ago.

“Adelaide was only ever meant to be a stop-over city for us,” says Jeremy. “We had moved from Singapore to Perth for work. I didn’t enjoy Perth.”

“We had a holiday in Melbourne though and absolutely loved it,” says Maritza. “We decided we wanted to live in Melbourne, so when I got a job opportunity in Adelaide, we saw that as being halfway there.”

But once Adelaide got its hooks into these New Yorkers, they found it difficult to justify moving.

“We’re foodies. We love wine. I love to cook. This place is perfect for us,” says Jeremy.

That was five years ago. We ask Jeremy and Maritza how long they’ve been coming to Bar Torino. Ever since it opened, they say proudly.

We suggest a nice wine to try from the list, but Maritza is already familiar with Rieslingfreak. The couple have off-site storage for their wines and other prized things. Jeremy has a spreadsheet of all his wines.

Jeremy and Maritza are passionate advocates for city life and know so much about what’s going on in Adelaide, they even give us a run for our money. The pair are members of a lot of clubs, but they also attribute their knowledge to their love of walking.

“Let me put it this way,” says Maritza, “in New York you go go from one end of Manhattan to the other – walking. Adelaide is the same.”

“I walk everywhere,” says Jeremy. “You know the Edinburgh Hotel and Cellars in Mitcham? I walked there from home [on Hurtle Square], easy.”

What started out as a pit stop on the way to a bigger city has turned into the chosen home of these two New Yorkers.

“Everybody jokes about how Adelaide’s a ‘dead place,’” says Jeremy. “Then you come here and you start getting to know people and there’s so much going – there’s a tonne going on here!”

“I love it when people from the eastern states start making comments about Adelaide,” says Maritza. “And I go, ‘I agree. You really wouldn’t like it here.’

“I don’t want them here! They can stay in their own silly little state,” she says with a wicked smile.

Born and raised in New York with stints living and working in Singapore, Perth and Sydney mean the Keisman’s are qualified to defend our city.

But we’re totally okay with them keeping it as the world’s best-kept secret.