This year, the Cricket World Cup comes to Australia and New Zealand. A swarm of ardent international supporters will follow, ready to cheer their team from Adelaide Oval’s stands come win, loss or draw. 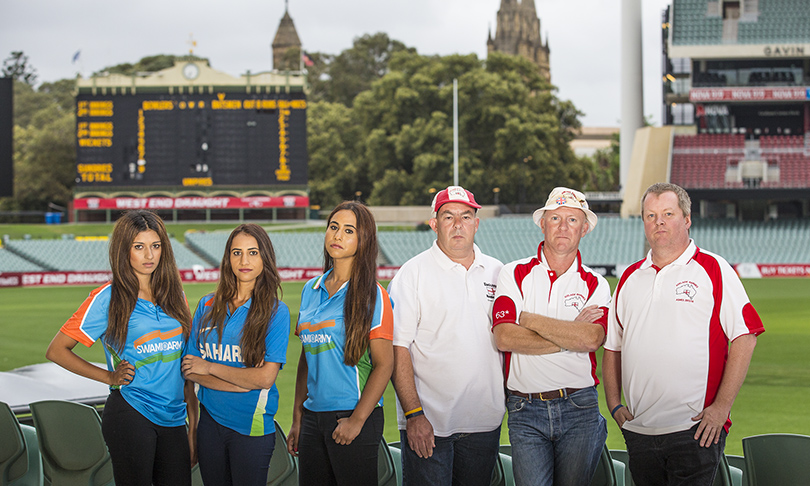 Both the Barmy Army – the English cricket team’s official support club and the Swami Army – a similar organisation that backs the Indian side, have deep connections to Adelaide Oval.

Above you can see the Swami Army’s Sharan Kaur, Mamta Singh and Aneeta Singh with Steve Carroll, Johnny Coop and Andy Stockings of the Barmy Army.

The Barmies were formed there as the fourth test in the 1994 Ashes Series kicked off, with original shirts (now rumoured to sell for about $1500 each on eBay) printed at Hindley Street’s T-Shirt City and handed out to English fans on day one.  Meanwhile, the Swamis hold fond memories of India winning a 2003 test match against Australia at the ground, something co-founder Sumit Grover says is important “given the Indian team have not won too many test matches”.

Both groups will continue their patronage of the venue during the scheduled World Cup fixtures throughout February and March, although the Barmies will be in shorter supply than the numbers usually seen during an Ashes tour.

“Unlike nearly every other major cricketing nation the English fans are very much aficionados of the five-day game and traveling overseas at significant expense to watch a one day series or World Cup has never really caught their imagination,” says Barmy co-founder Dave Peacock.

There will, however, be no lack of the Barmy Army red and white in the stands. Plenty of members hail from Australia, and Adelaide is the only place in the world that boasts an international branch of the club.

“The only difference is that if the game is meandering along in the wrong direction you might say, ‘right, lunch time means a round of sambuccas’.” – Andy Stockings

“It was run-up to the ’10-’11 Ashes Series – South Australia played England in a warm up match. I’d been out with a couple of other lads and went down to the ground to find about 15 other English lads there,” says Andy Stockings – one of the organisers of the Adelaide contingent. “The afternoon session got cancelled because of rain and so we went to the pub and things happened from there.”

Around the English ODE to be played against Bangladesh on March 9, there will no doubt be a spike in bar takings at The Cathedral – the North Adelaide pub that Dave calls the Barmies’ “spiritual home”. PJ O’Briens – the official Barmy Army HQ and The Elephant, which is favoured by those in the Adelaide delegation (“because they use proper pints”, says Andy), will also likely see a bump in sales.

The impact of the Swami Army’s presence during India’s matches will be marked. The game against Pakistan that was played on February 15 sold out in less than an hour, and was attended by Swami members from interstate and overseas, as well as locals.

They filled almost a whole stand on the Eastern side of the Oval, and as their orange, green and white flags waved their Bollywood singing rang out across the pitch.

“There were a number of events around the Adelaide match, including a cricket match played amongst members on the Saturday, a party on Saturday night, and then we met up at a venue before the game and marched in together to the stadium,” says Sumit.

A quarterfinal will also be played at Adelaide Oval on March 20, and while both the Barmy Army and the Swami Army hope their team might make the grade, neither group would commit to being overly optimistic.

This ability to smile and cheer even when their side is down is perhaps the starkest contrast between these supporters and the Australian fans, who can often get dreary when things don’t go their way. In times of loss, the Indian fans tend to cheer and sing louder, while the British have their own unique coping mechanism.

“The only difference is that if the game is meandering along in the wrong direction you might say, ‘right, lunch time means a round of sambuccas’,” says Andy with a laugh.

In the end, it doesn’t matter who wins the cup – Adelaide is still coming out on top as this cricket-related boost in visitation and spending translates into more colour, life and movement in the city.