Using produce grown in her home garden, The Salopian Inn co-owner and head chef Karena Armstrong uses the public BBQ to cook a dish that typifies her approach to Australian cuisine. 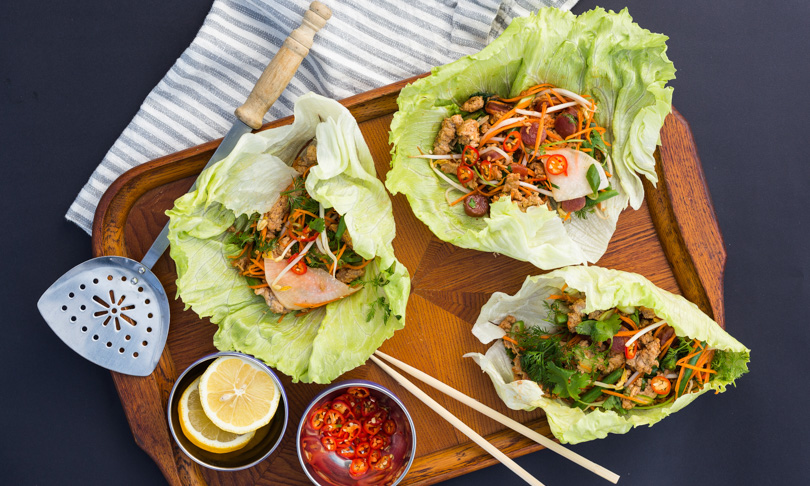 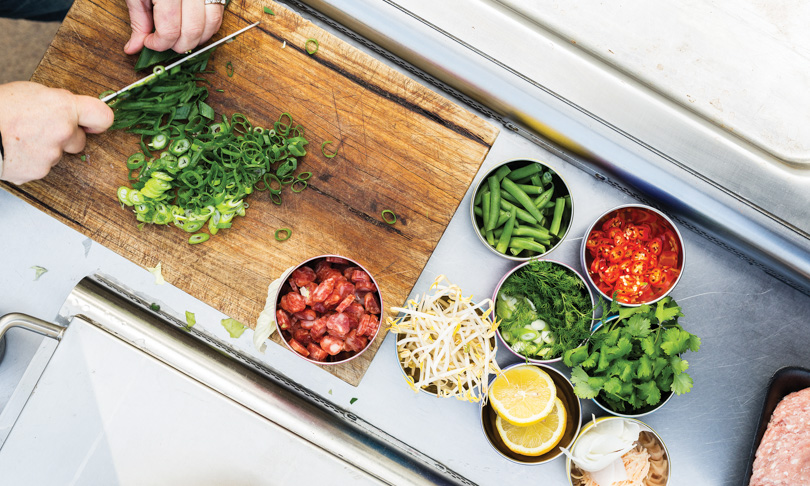 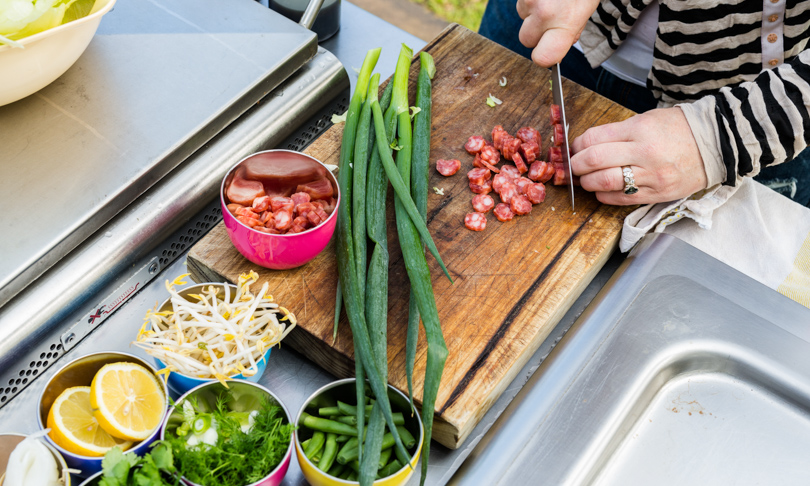 “Australians just get to travel with our palates, and I just think we are so lucky,” says The Salopian Inn head chef Karena Armstrong.

Preparing a pork san choy bau on the Rymill Park public BBQ closest to the playground where Fletcher, her youngest son, is amusing himself, Karena explains why Asian dishes are an important part of the Australian flavour profile.

While working away on the BBQ, Karena mentions how much she appreciates iceberg lettuce, which is a great relief to us at CityMag. We’ve been attempting to keep our passion for the simple, sweet and crispy leaf under wraps but will now wear our love with pride.

It was a speedy prep process

Accordingly, Karena’s menu at the Salopian – which she and husband Michael Armstrong bought about two years ago – is not limited to a single style of food.

“Flavour is just really about balance, so it’s always sweet, sour, salty and hot – they’re always there in some combination. It’s just universal,” she says.

As the menu changes seasonally, it comfortably covers what might be called traditional flavours (such as winter’s chicken and bacon terrine served with sauerkraut) as well as the less familiar (see chilli caramel kangaroo tail entree).

Seasonality and sustainability is something Karena takes particularly seriously. Part of a growing number of food and wine professionals who produce as well as purvey, she has been cultivating a kitchen garden at her home property that now supplies about 70 per cent of the restaurant’s fresh produce.

A dish as delicious as it is colourful

Among the home-grown elements of the san choy bau browning on the BBQ are daikon, lemons, chillies and coriander.

“What really interests me now is controlling a lot more of that production,” says Karena. “That’s still really developing – I still haven’t got it 100 per cent right and I don’t pretend that I have. But I would like to get to a point where we’re serving everything that to my knowledge is truly sustainable.”

Owning and helming The Salopian Inn, which is also a dedicated gin bar with more than 150 versions of the spirit on offer, is Karena’s return to full time work following some years spent having her three children.

After an early career spent working with luminary chefs including Alla Wolf Tasker at Daylesford’s Lake House, Karen Martini at Sydney’s Icebergs Dining Room and Kylie Kwong at NSW’s Billy Kwong, Karena moved back to her home state of South Australia when husband Michael got a job here. She initially spent time reinventing The Victory Hotel’s approach to food, before switching to being a full time mum and then coming back to work part-time at Port Willunga’s Star of Greece.

As soon as she was back cooking, Karena knew she was ready to throw herself back into the world of chefing.

“I got back into the kitchen and thought ‘right, I just want to come back’. And Michael was sick of corporate life, so we decided to buy a restaurant,” she says. “It’s both ends of the spectrum –the most satisfying work experience I’ve ever had but also the most stressful.”

“I never knew it was going to take over my life like it has. But then there’s moments where it all goes right, and it all comes together, and you’ve got really happy diners and you have a good week and it’s the most amazing thing.”

Tasting the spicy-yet-not-overpowering, wonderfully textured san choy bau Karena has made on the public BBQ, CityMag would be very surprised if diners at The Salopian Inn were anything but happy.

Heat about half of the peanut oil on the BBQ to sizzling, and then add the pickled ginger.

Add the pork mince and begin to brown. After a few minutes add the Lap Chong, beans, fresh chilli, and fermented chilli paste, all while stir frying vigorously.

As you’re stir frying, add the soy sauce, sesame oil and oyster sauce – allowing each sauce to blend properly before adding the next.

Just before serving, stir through the bean sprouts, spring onion, pickled daikon, dill, carrot and coriander and serve into iceberg lettuce cups while these elements are still crunchy.