The sun shone and the wind blew a gale as Magill Estate’s pastry chef, Emma Shearer, showed us that doughnuts and the foraging of native plants can go hand-in-hand. 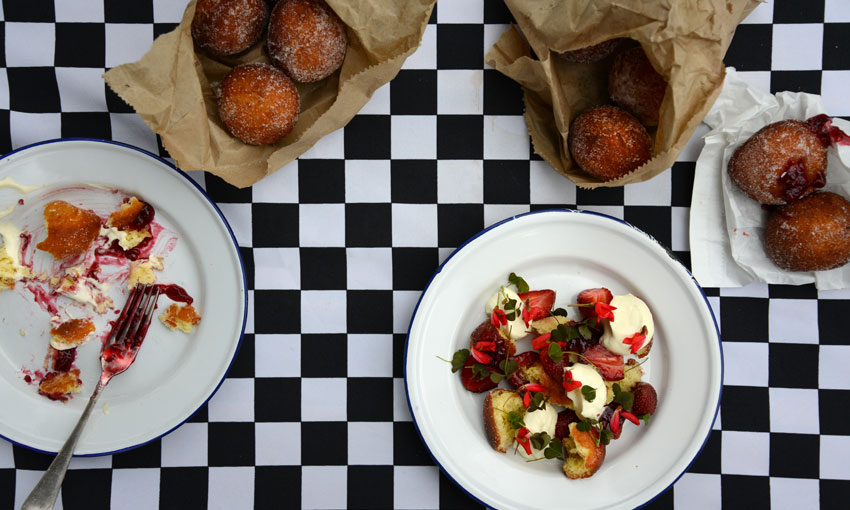 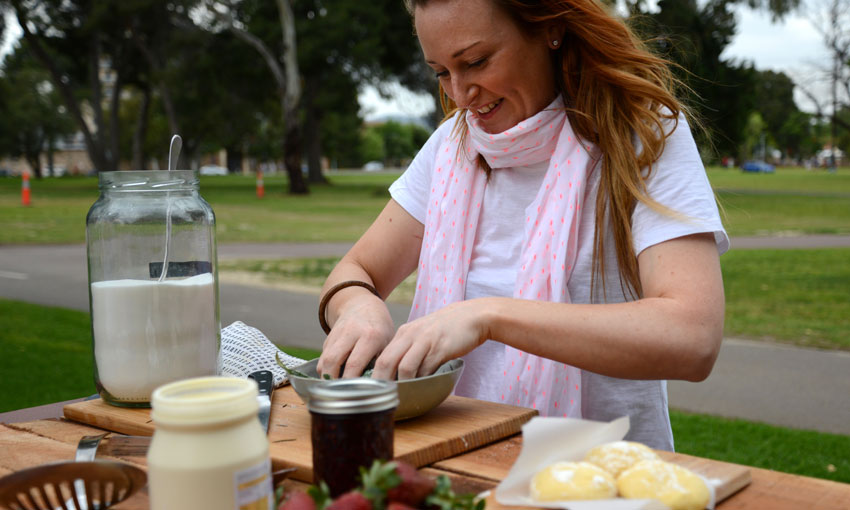 On her first day as an apprentice chef at TAFE, Emma Shearer started a small fire and didn’t even notice.

“I was just standing there totally amazed looking at this big school and I think the first thing we had to do was season the pan,” she says. “There I was looking around when someone said to me ‘oh, your tea towel is on fire’.” Thankfully, that incident didn’t set the tone for the career of the now very successful Magill Estate pastry chef. Nor was it indicative of Emma’s experience working with the public BBQ – where she has almost the opposite problem, as the hotplate stubbornly remained too cold for heating the oil in which she was hoping to fry her doughnut dough.

Placing a plate over the top of the pot of warming oil to encourage it, Emma explains that the burning tea towel at TAFE wasn’t her first kitchen experience.

Even before starting her apprenticeship, at just 14, Emma says she already “knew” that she wanted to be a chef. She knocked on the back door of a restaurant near her childhood home in Clare, but was told she was “too young” for a job there.

Eventually, she found work in another nearby kitchen – originally as a fill-in kitchen-hand for someone who was on holiday.

“If you’re having fun then obviously that will show in your food.”

“And they just loved having me there, I guess because I was so young and enthusiastic. I was actually filling in for someone and when she came back – I took her job! They told her they didn’t need her anymore!”

Because she started so young, Emma was a fully qualified chef by the age of 19. After a year in France working as a nanny, she returned to SA and went through a series of restaurants – most notably The Manse where she worked with chef Ayhan Erkoc, now owner of Celsius on Gouger Street.

“That was my real start to being a pastry chef,” Emma says. “Even five years ago no-one really had a pastry chef, you had to be a generalist. A hotel would have them but a restaurant wouldn’t. But Ayhan came in and wanted someone to specialise.”

Now known for the sweet side of the menu at Magill Estate, Emma has been part of the restaurant’s re-invention since the very public departure of former head chef Jock Zonfrillo who originally hired her into the role. Strawberries on the grill

Since Jock’s departure, Magill Estate operates under the joint head chef team of husband and wife Scott Huggins and Emma McCaskill, who were nominated by Gourmet Traveller as the best new talent in the country this year. After playing a central role in the kitchens of so many luminaries, Emma still says there are some simple things that make the best chefs.

“You either have it or you don’t. You can read about it, but not everybody has the ability,” says Emma. “You have to understand flavour, but then you have to add in texture – is it going to be wet enough for people to enjoy but not too wet? Does it have some crumb, or some crunch?”

“Also, the calmer a person is the better, because the rest of the team will follow. If you’re having fun then obviously that will show in your food, whereas if you hate going to work everyday you’re not going to try as much, so you want everyone to be 100 per cent.”

On an unusually windy day, working with a hotplate that only heats her oil sufficiently after about half an hour – Emma keeps smiling, making jokes and feeding us the wine she thoughtfully provided. By the width of her smile and the delicious, slightly lemony and lolly-like flavour of her not-at-all doughy doughnuts, she rates pretty well on her own chef scale – although she would be far too humble to say so.

Preparing the dough for its tepid oil bath on the BBQ

At home – before heading to the BBQ

In an electric mixer fitted with the dough hook attachment, add the sugar, flour, zest of lemon.

Dissolve the yeast in the warm water and add to the bowl, add the eggs.

Mix on a slow speed until the dough comes together.

Add the soft butter in small pieces while the mixer is working; let the mixer bring the dough together for about 10 minutes until the dough is shiny and smooth.

Cover the bowl with cling film, and leave to prove in a warm place for 2hrs. Then knock back the dough and cover again and put in the fridge for 4 hours or more, even over night.

Onto a floured surface, roll the dough into 20-30gm balls and leave the balls to prove for an hour.

Place a pot of vegetable oil on the BBQ and heat to 160 degrees. After patiently waiting for the oil to heat, gently place the dough balls into the oil. Occasionally turning them over, cook for about 3-4 minutes.

Drain the doughnuts on kitchen
towel and roll in sugar.

–1 punnet of the best local strawberries you can get

Cut the strawberries, toss them through the sugar and lemon myrtle, gently rub the flavour into the
strawberries.

On a hot BBQ plate, grill the strawberries letting them caramelise slightly.

Whip up some good quality cream, such as Tweedvale, with a little icing
sugar.

Tear the sugared doughnuts, rub through some good local raspberry jam, and then place the strawberries around the doughnuts and top off with dollops of the cream.

Finish with a few wild flowers – Running Postman is a good option as are a few Wood Sorrel leaves.