Aboard a BBQ Buoy floating on Karrawirra Parri, chef Brianna Mahoney smiles her way through the creation of a Middle Eastern-inspired feast.

But, Bri accepts that the ease she brings to cooking might not come so naturally to us all.

“People ask, ‘How’d you make this? And I say, ‘Oh – a bit of this, a bit of that, then it was sort of lacking, so I added this other thing, and it was perfect’. And I realise that might not be for everyone,” says Bri. 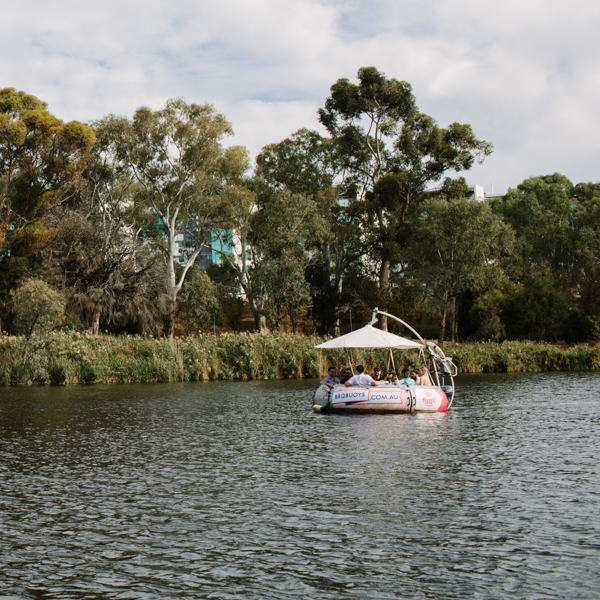 For a change of pace, this edition we swapped from cooking on a public BBQ in the Parklands to cooking on the BBQ Buoys that float on Karrawirra Parri (the River Torrens) and can be hired by anyone. Equipped with new gas-fired BBQs and an extensive list of South Australian drinks, these floating kitchens proved much less temperamental than their land-bound cousins. 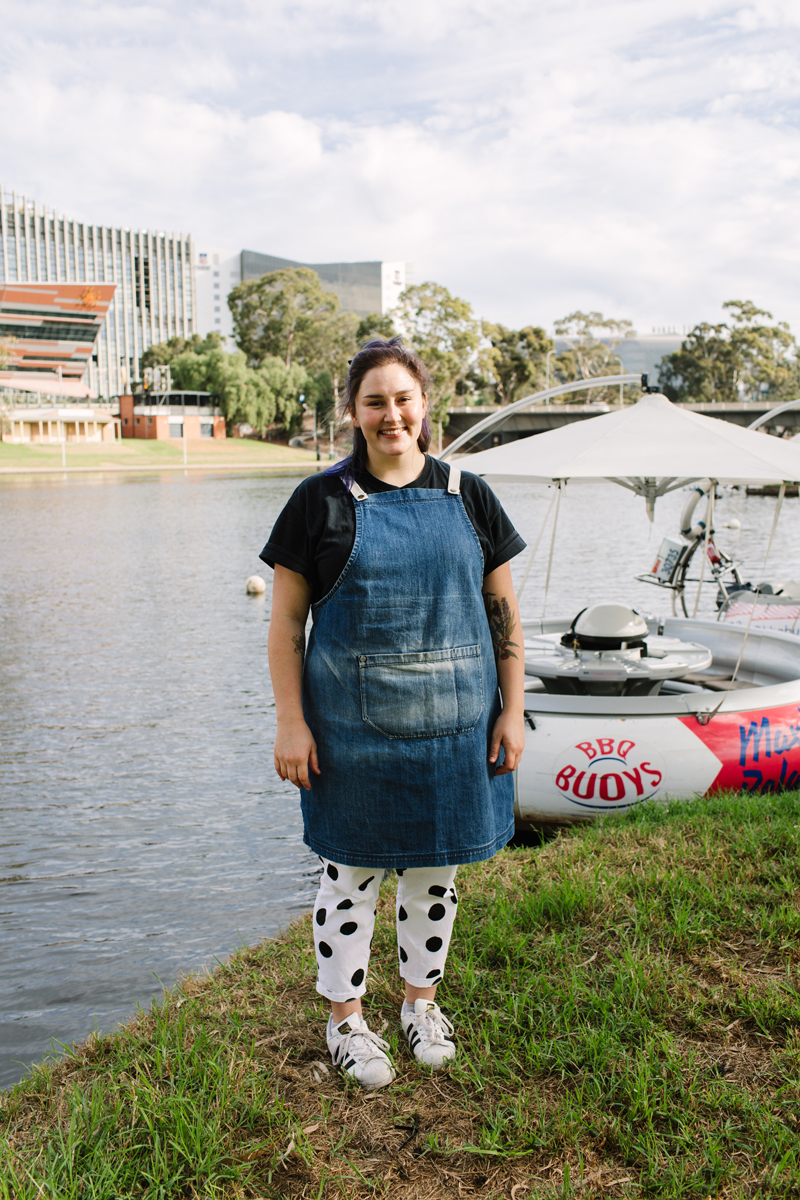 While she is now the head chef at Fairweather on Solomon Street and has always exercised her natural aptitude in what she calls “side jobs” in kitchens, Bri spent a long time avoiding becoming a chef.

After finishing high school she pursued multiple careers – the foremost being in music, but also working on a station in the Northern Flinders Ranges, working in bars, and cleaning. Through it all though, cooking held her enthralled.

“I just thought, I’ve been doing this my whole time out of school anyway, so I might as well actually get my qualification and be a proper chef,” says Bri.

“Mum was telling me to do it, but I just kept saying – I don’t know if I want to be committed to this, I probably won’t like the hours and, really, I was just spitting out the same stuff everyone used to tell me after school when they were discouraging me from cooking.

“And then I started doing it and it was like, this is the best thing I’ve ever done! I love cooking so much!”

After qualifying in 2015, Bri began working at the Intercontinental on North Terrace where she cooked across the banquet, pastry, breakfast, and restaurant kitchens.

Her experience there stood her in good stead to take on the head chef position at Fairweather – where she creates breakfast and lunch dishes.

“I loved the breakfast chef and so much of what I know now I can attribute to her,” says Bri. “Alicia Englefield – she’s phenomenal.”

“This is the best thing I’ve ever done! I love cooking so much!” 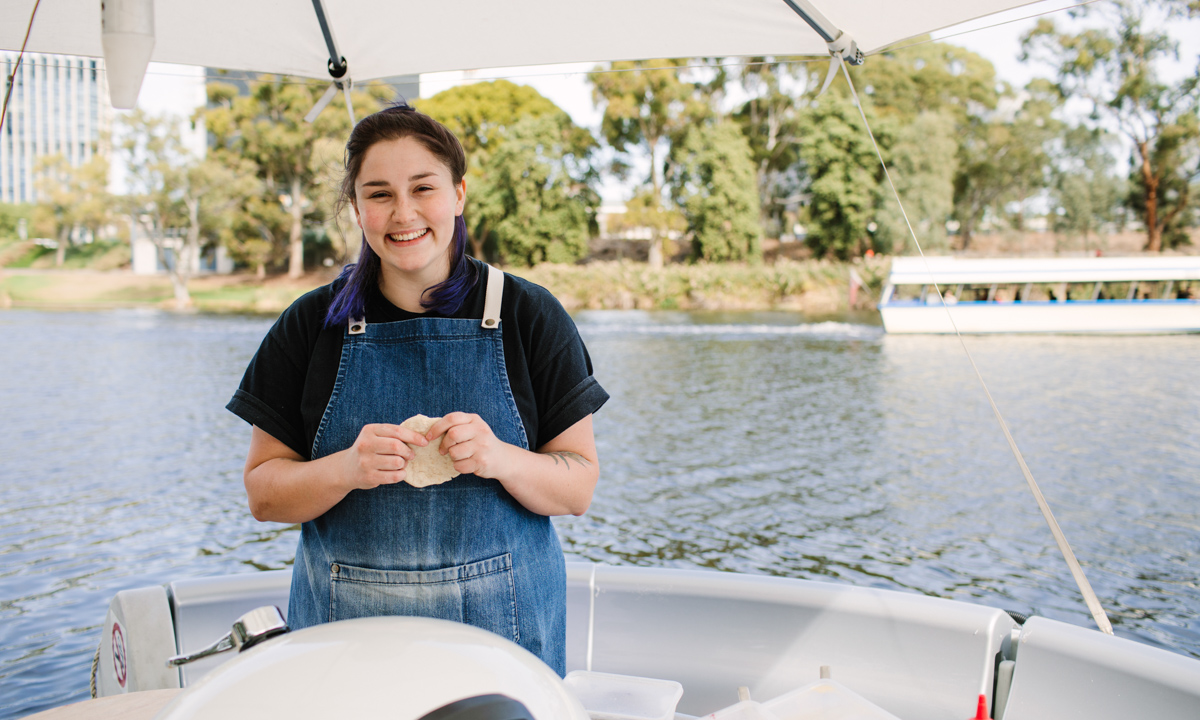 Simon Heinrich – the owner of Fairweather –  met Bri through a friend of a friend when he was preparing to open the café, and they immediately recognised in each other a common sensibility around food.

“He had a base menu already written by one of his friends who is a chef, which had Middle Eastern influences that I still try to keep in the menu, but to be completely honest, I didn’t know much about Middle Eastern cooking before I came to Fairweather,” says Bri.

“So he showed me the menu, and I think the theme wasn’t quite as important as the ideas we held about food – I like to use seasonal food, as locally sourced as possible, and just really good quality produce and we both feel very strongly about those things.”

Despite her initial hesitations around Fairweather’s Middle Eastern slant, the food Bri chose to cook during the CityMag photoshoot draws heavily upon the cuisine – with falafels, hummus, and yoghurt flatbreads all on the menu.

Her embrace of this new direction hints at the underlying reason for her unbridled love of her profession.

“I love just seeing what I can do with whatever comes my way,” she says. “Cooking is so adventurous.”

For the yoghurt flatbreads:

Mix all of your dry ingredients in a bowl and make a well in the centre. Add the yoghurt and warm water to the dry mix and combine. Turn out onto a floured surface and knead until you have a smooth dough, don’t stress if it takes in a lot of flour. Lightly coat the dough with olive oil, place in a bowl and set it in a warm place to prove until it has doubled in size, roughly 40 mins. 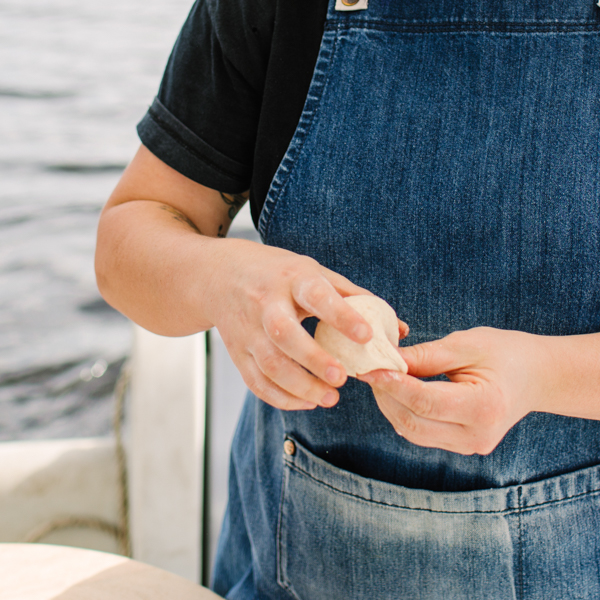 Once your dough has proved, knock it back and pinch off golf ball sized pieces. Now is also a good time to pre-heat your flat grill. You want it to be really hot, at least 200°C. 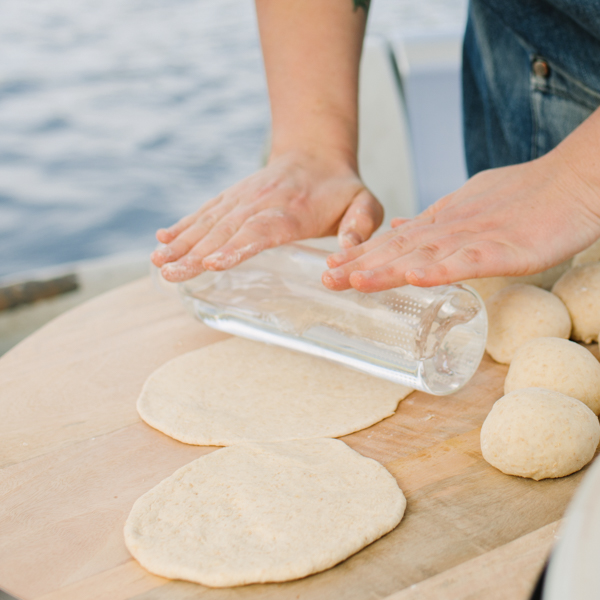 On a lightly floured bench, with a lightly floured rolling pin (or wine bottle… or water bottle…) roll out the balls into thin discs, approx. 3-5mm thick and place them straight onto your flat grill, no oil or grease. 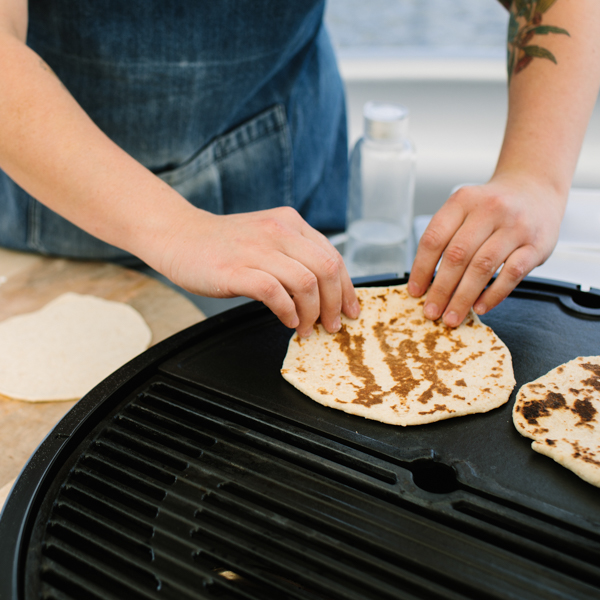 Let them cook for a couple of minutes each side, until lightly scorched. Serve with dips, falafels and any accompanying sauces!

Put the chickpeas in a large bowl (or bucket, any vessel) and fill with at least double the amount of cold water. Set aside to soak overnight.

The next day, drain the chickpeas and place them in the bowl of a food processor with the rest of the ingredients. Blitz the mix until it resembles something similar to couscous, make sure it doesn’t become a paste. It should still hold its shape so you can divide the mix into portions. I weigh mine to roughly 50g balls and then mould them into my desired shape. 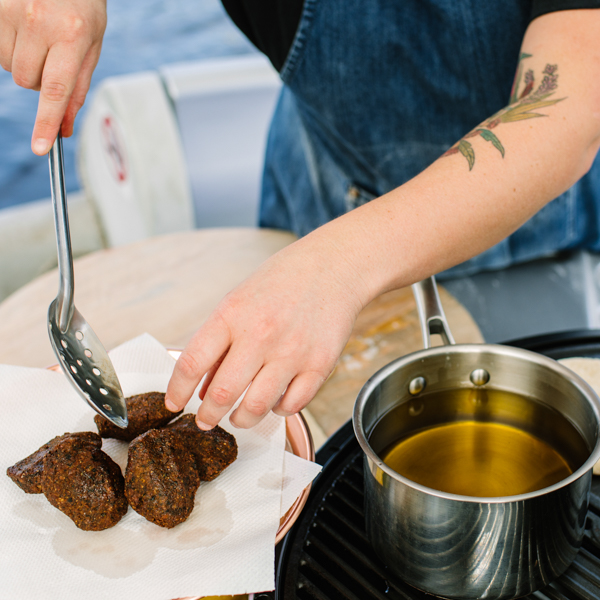 If you have a deep fryer, this next part is really easy. Set the temperature to 170°c and fry for approx. 4-5 minutes until the falafels are well browned and cooked through. Alternatively, heat 1L of sunflower oil in a saucepan to 170°c and follow the same process, then place on paper towel to drain and serve hot.