If it was necessary for magazines to have a stance on such things, CityMag would be unashamedly pro-bread. We love bread, and so does Flinders Street Project chef and co-owner Stewart Wesson. Bread and BBQs, though, are not traditionally friends - unless there's a sausage around to mediate things. 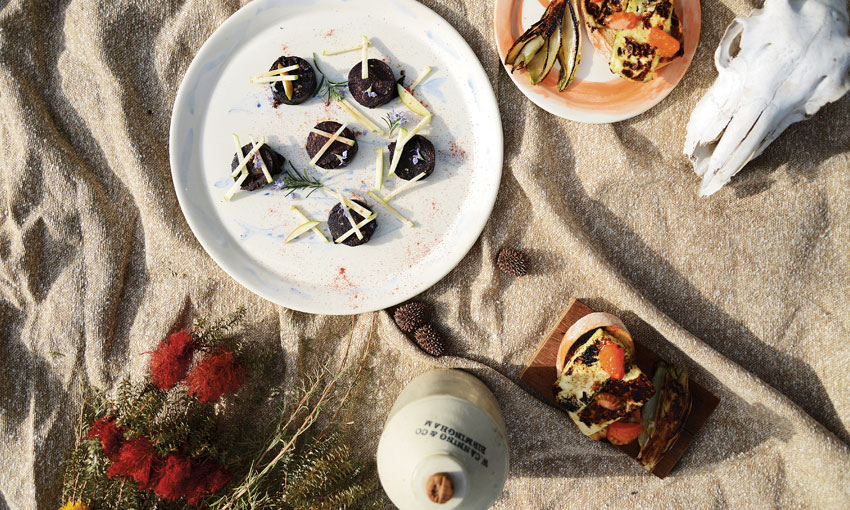 Keep your ear to the ground to be part of the Flinders Street Project’s side events that go under the name Saturday Night Projects. These unique, bookings-only dinners will be themed and seasonal, with Stewart and his team cooking something completely different for every event.

The heart of the eatery is its in-house bakery, where Stewart labours in the awfully early hours of the morning baking loaf after loaf of bread. He feeds his kneaded dough into a special oven – a relic of the past that he took possession of by chance.

“I used to work at the Hilton in their pastry kitchen,” says Stewart. “They had this oven that weighs a tonne – it’s 900-and-something kilos. And they wanted to get rid of it, so they told me and my best mate we could have it if we could come and get it out of there.

“There’s no temperature dials, it just has one, two and three written on a big dial. It’s got old stone and I’m just going to bake bread on that and go back to some really old grains in the bread.”

A friend of humans and bread alike – Stewart Wesson

As befits an oven of such inexact science, the Flinders Street Project’s bread output is unusual for Australia but familiar to those who’ve spent time in Europe where the art of baking goes back centuries. The loaves are properly crusty and substantial, and made with a much wider range of ingredients than those used for our commercial, flimsy white slices.

“I think everyone eats bread… but not everyone has experienced good bread and that’s what I want to bring – really crusty bread with different flavours.”

Bread is a common foodstuff, and even when it’s done badly it’s still pretty delicious. But by sourcing high quality flours through local supplier Laucke and looking for rarer grains around the state, Stewart hopes to raise our expectations of the daily staple.

“I think everyone eats bread – from Wonder White up until your really crafted stuff, but not everyone has experienced good bread and that’s what I want to bring – really crusty bread with different flavours and neat flours where you can still see grains in it,” he says.

Flinders Street Project sells things other than bread – though we would argue that is enough. A range of Danish-inspired open sandwiches, called Smørrebrød, are available for lunch and sport toppings like beef tartare and pork belly. Pastries also feature heavily on the menu alongside a sensibly substantial beverage list that takes in the proper spectrum all the way from coffee to Campari.

Some delectable things waiting to be deliciously assembled

Stewart’s foray onto the public BBQ, which unceremoniously and unhelpfully stopped working for about five minutes while he was cooking, involved a dish very reminiscent of his Flinders Street menu. As he tossed day-old bread onto the hotplate and fiddled with a very aromatic blood pudding, he waved a hand at the BBQ counter and explained that it has some similarities to his proper kitchen.

“The kitchen at Flinders Street is like this bench but a bit bigger,” he says. “Customers sit on one side and we work on the other side and we can talk to them while we’re working. You can talk to people and there’s no barrier in between us.”

The open design was masterminded by one of Stewart’s business partners. The pair behind the Pantry on Egmont and Ginger’s Coffee Studio – Megan Roodenrys and Michelle Kewell – launched the venture with Stewart, and Megan was responsible for all of the interior design. The crowning feature is a hanging sculpture made of more than 10,000 wooden spoons that is both a defining aesthetic and a way of acoustically treating the space.

Stewart plates up his bread – layering it with Kangaroo Island haloumi, caramelised witlof and fresh tomato seeds, with a side serving of seared blood pudding, salsa verde and grated apple. It’s simple food, but with memorable flavour – the kind of thing you could eat every day, which is just as bread should be.

Haloumi on the grill

Preheat BBQ, once hot, drizzle some olive oil on the hot plate and place the thick cut sourdough on to toast on both sides.

Cut the witlof in half length ways and rub with olive oil and black pepper and place on the grill cut side down.

Cut the haloumi into 5mm strips and place on the grill to colour on both sides.

Cut the tomatoes into quarters, remove the seeds and keep the off cuts. Once the sourdough is toasted on both sides, rub with the tomato off cuts.

Place the toast on a plate. Layer on the grilled haloumi and top with the tomato seeds, olive oil and more cracked pepper, add the grilled witlof to the side and serve.

Black pudding getting blacker on the BBQ

Preheat the BBQ for 10 minutes until really hot.

Cut the Morcilla sausage into 1cm rounds, add some olive oil to the  grill and colour the sausage heavily on both sides.

For the salsa verde, chop all the herbs, capers, anchovies and garlic until they form a fine paste. Mix this in a bowl with the vinegar, 100mls of the olive oil, lemon juice and seasoning.

Once the sausage is coloured on both sides place on a plate and add some salsa verde around the sausage.

To finish, cut the apple into matchsticks and sprinkle them on top with some cracked black pepper.