Bunfight: Food trucks back in the firing line

After Adelaide City Councillors voted to progress with new, harsher regulations for food trucks by taking the proposed changes to public consultation, illustrator Elaine Cheng took her sketchbook to the streets and asked food truck operators how their business would be affected. 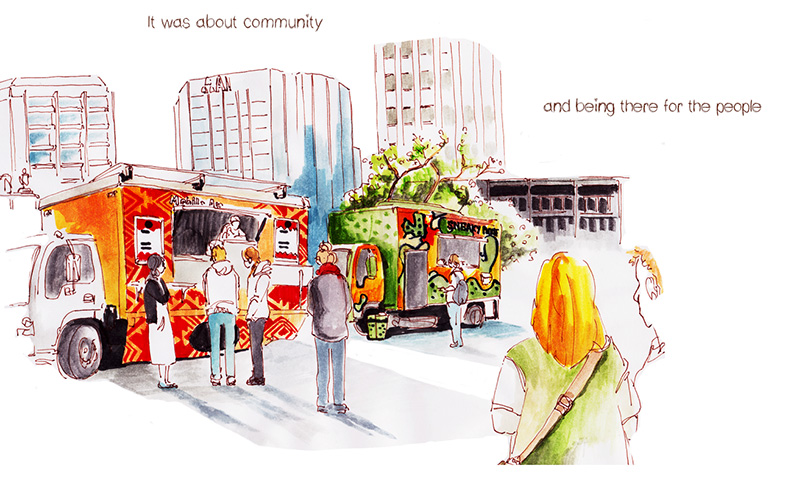 Adelaide’s food trucks have been experiencing a relative period of peace recently. After the initial controversy that accompanied their appearance in 2011, it seemed they and their detractors had settled into an uneasy peace brokered by Adelaide City Council’s regulations, which saw trucks pay permit fees and given restrictions on where they could operate.

Now though, the lifetime of those regulations have expired and the conditions under which food trucks operate are again up for debate.

Two weeks ago, the Adelaide City Council voted to move forward with a set of harsher regulations that would enforce a 50m separation between food trucks and existing businesses (the current distance is 25m), lock them out of trading in several of the most lucrative spots around the city and raise permit fees.

Several Councillors, most prominently Sandy Wilkinson and Anne Moran, argued these changes were necessary to stop food trucks from having unfair advantage over bricks and mortar eateries.

A final decision on whether to adopt these changes will be made after the period of public consultation concludes on August 28.

Illustrator Elaine Cheng took to the city streets with her sketchbook in hand to gauge what this could mean for food truck vendors.