Cheap treats: The best not-meat in the city

In the second of our three-part series on good value food and drink in the CBD, we take you on a tour of the vegetarian eat-houses in the estuaries off Adelaide’s main drags. 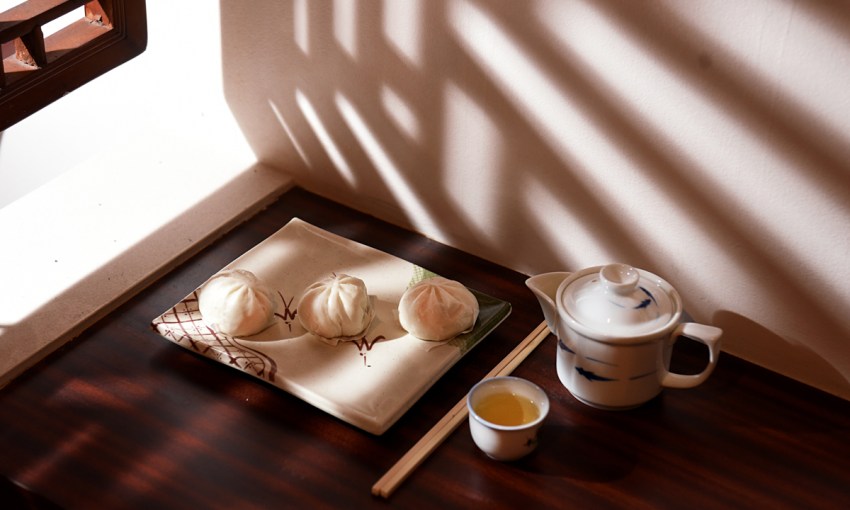 Some of Adelaide’s best vegetarian eateries hide down side streets in plain sight, while locals in the know regularly pack them out each weekday as they seek to replace platefuls of meat with more plants.

The best vegetarian in the city for flavour, consistency and price are – without doubt – the Asian diners in town, who’ve been doing excellent food ethically for many more years than it’s been fashionable.

Enjoy your next meat-free meal with CityMag‘s guide to the menus and the people who make Adelaide’s best vegetarian lunch. 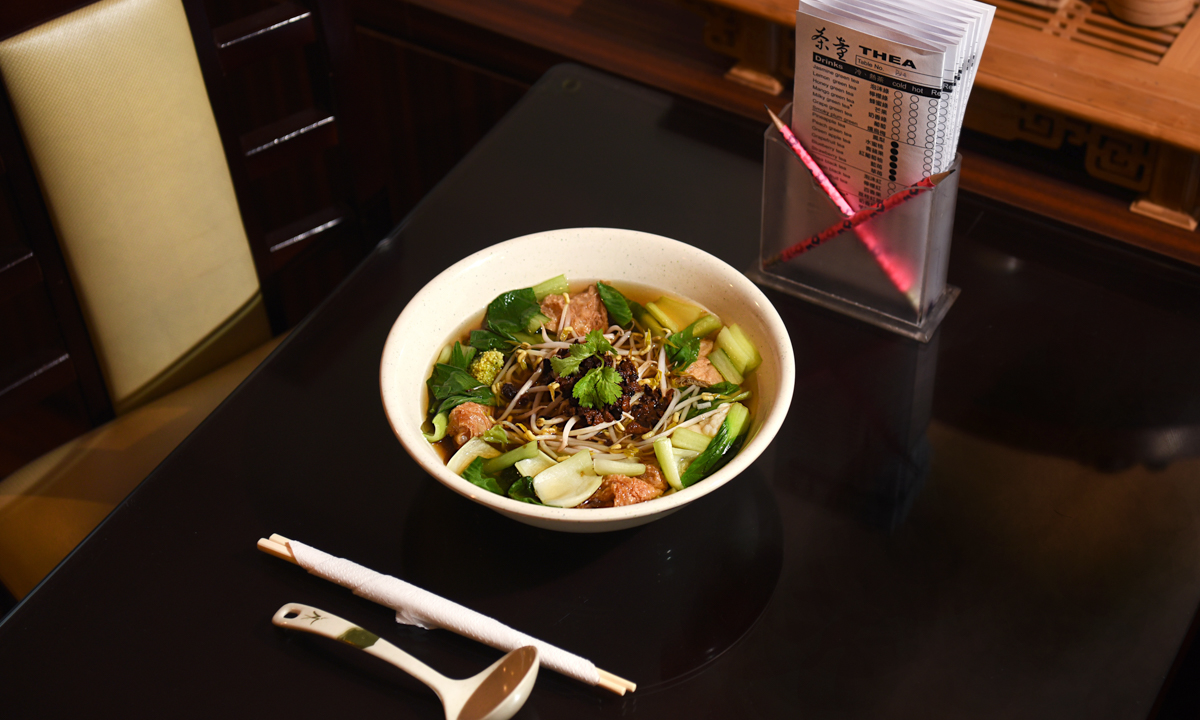 The varnished wooden interior radiates a sense of warmth and welcome as we push through the glass doors of Thea Vegetarian Tea Garden on Gawler Place. The unrivalled tranquillity of the faint Chinese music playing over the restaurant, juxtaposed with the busy concrete jungle of the city outside provides instant relief for those craving some peace and quiet in the middle of their day.

Thea’s story started back in 2000, in a small, 20-seat bubble tea joint in Gay’s Arcade. It was Adelaide’s first bubble tea shop, say Thea’s owners. Newly emigrated from Taiwan, siblings Kathy, Brian, and Steve Chen decided to take the leap and enter the hospitality industry after the Y2K bug failed to bite.

“We had a really rough first six months but then, after that, we gradually became really busy so it was quite good towards the end. When the lease finished, we decided to move to a bigger premises,” Kathy says. 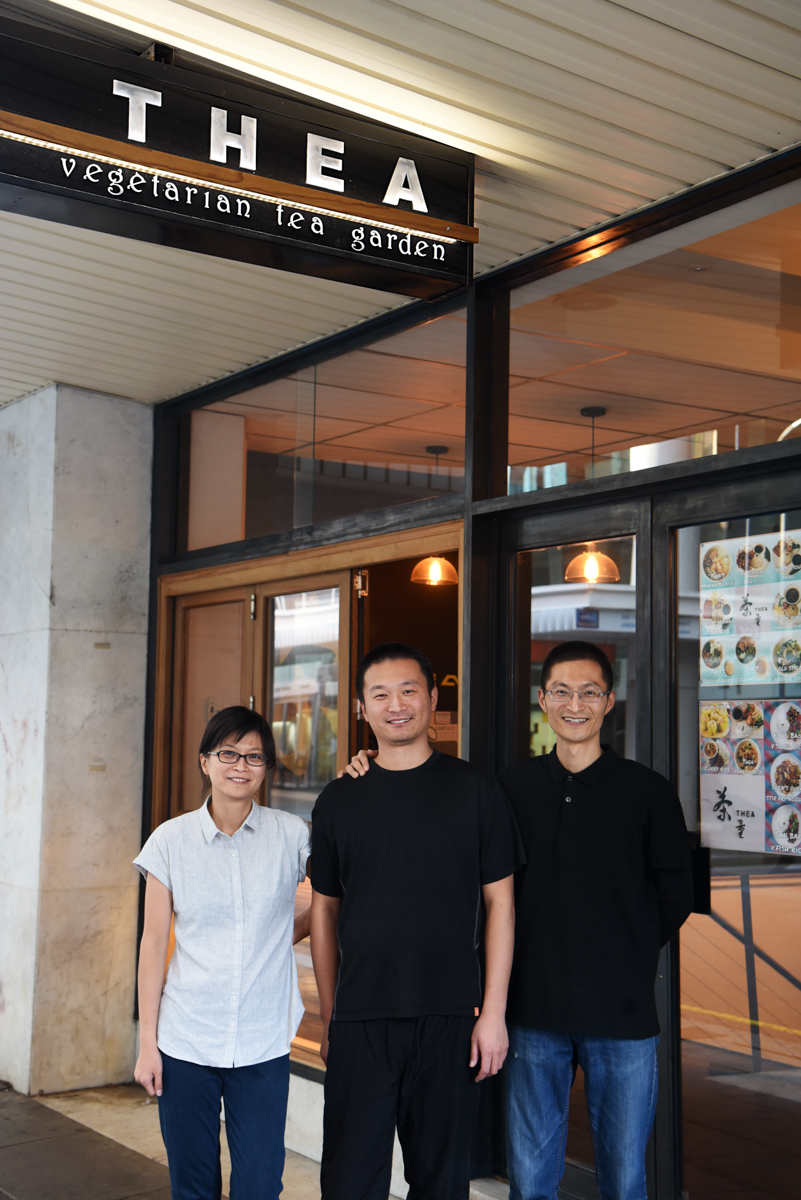 Kathy manages back of house and generally keeps the business running, with Steve in the kitchen as head chef, and brother Brian running the floor and welcoming every customer that steps across the threshold.

The siblings have also involved their father, Mr Chen, in the business, adding his passion for good tea to the Thea brand.

“My dad does the tea ceremonies and he just offers free good quality tea to the customers. He just loves that. It’s his passion. He wants to introduce tea to all the people and he wants to hear people’s stories,” Kathy shares.

Though marketed as vegetarian and vegan, Thea’s patronage also includes its fair share of meat-eaters striving for healthier diets.

“A lot of them eat meat as well but they just like to have one or two days a week being vegetarian. That makes them feel good,” says Kathy.

Thea’s menu consists of a range of traditional Asian dishes including the Old Style Noodle Soup, which is so gentle on the stomach, Kathy recalls, that there was one pregnant lady who came in every single day as the soup was the only dish she could eat without feeling nauseous during her pregnancy.

As well as the traditional vegetarian dishes, Thea was also one of the first in Adelaide to embrace the mock meat – or not-meat – trend, with popular dishes like the Basil Nuggets, exclusively available on certain days of the week.

“It’s not just tofu and salad at Thea. There’s more flavour. Steve likes spice and different strong flavours. I think that’s what the non-vegetarian people like because it’s very hard for them to adjust to food that’s a little bit too plain compared to the normal food that they have,” Kathy says. 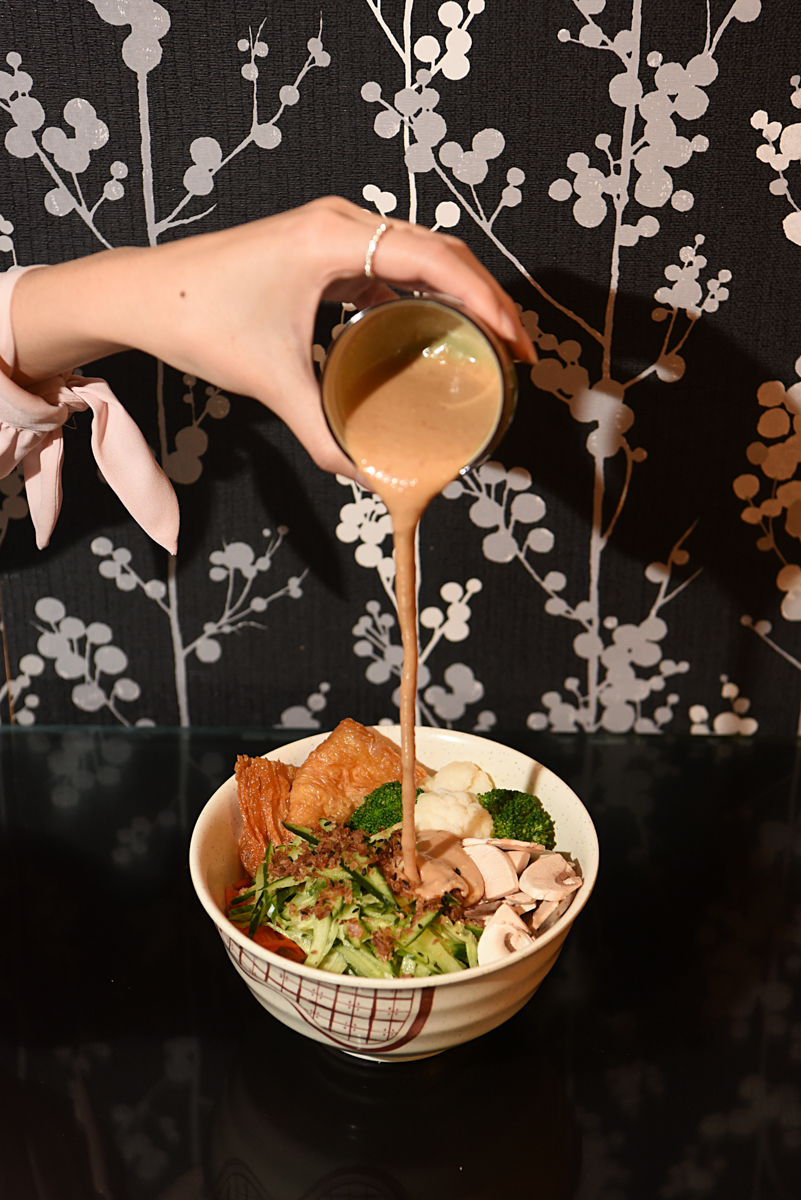 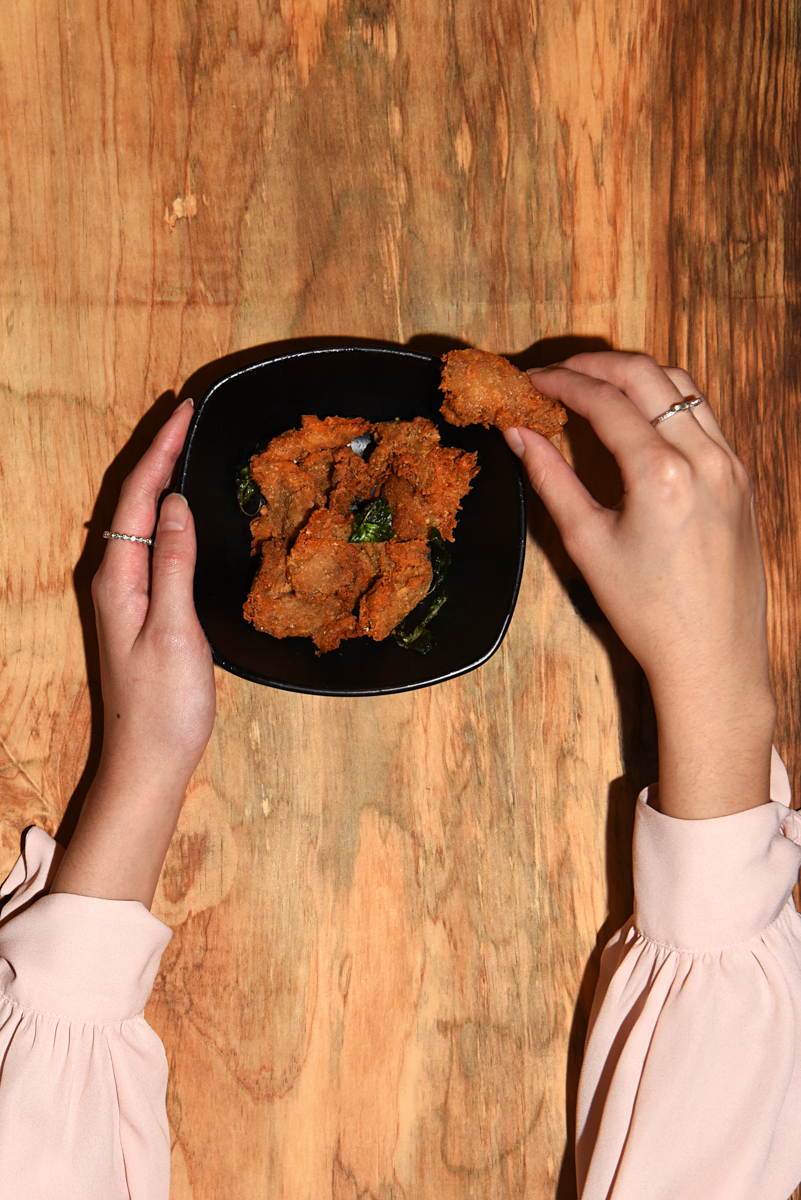 The Chen family have long sought to inject the Taiwanese philosophy in Thea, striving to pass on the very best hospitality to their customers.

Their original hunt for quality tea produce whisked them back to Taiwan in the early 2000s, where they visited the world-famous tea farms in the mountains of picturesque Nantou.

“All the tea farms that we went to, the people would just say, ‘Stay here for lunch’, ‘Stay here for dinner’, so they just keep on offering you tea and they just invite you to stay, so that’s how it works in Taiwan,” says Kathy.

Taiwanese hospitality isn’t the only concept that Thea adapted from that fateful trip; Thea has a unique ordering system that involves ticking off your order on the (already numbered) paper menus that sit in holders on the table.

“I think, at first, when we introduced this, people got really confused. They didn’t understand why,” Kathy says about Thea’s paper menu ordering system. “A lot of people just went straight to the counter to order. Then we had to ask where they’re sitting and they wouldn’t know.

“This is more of a Taiwanese tea shop style. The purpose for that is for people to come in and they don’t need to order straight away. They can come in, relax, and take their time to choose what they want, what their friends like, discuss the menu, tick whatever they like, and then just bring it upstairs and pay for it.”

Thea Vegetarian Tea Garden is almost twenty-years strong now. The Chen family owns the building on Gawler Place and Kathy says they will continue to invest and innovate in their business and property here.

“The comments we get at Thea are usually about it being a more calming, relaxing place to be by yourself or meet with some friends, always a good smile, and generous food provided,” she says.

Sounds to us like Thea has discovered an excellent recipe for success. 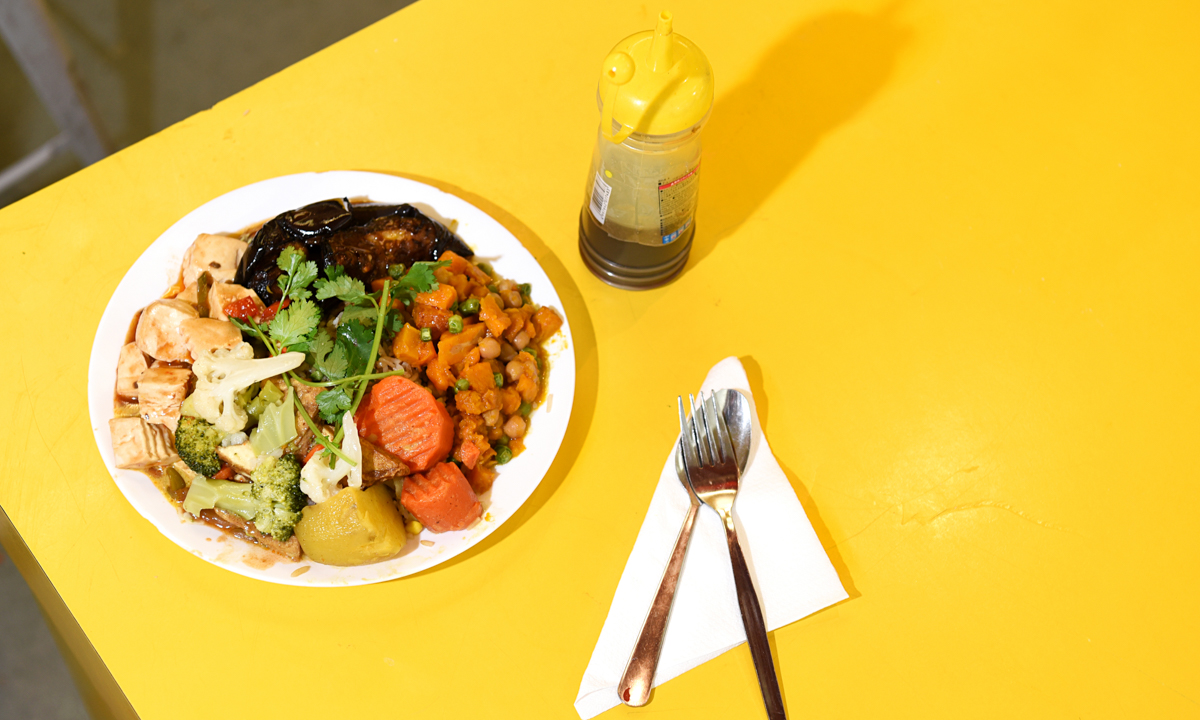 King William Street’s Southern Cross Arcade is home to a number of Asian specialty eateries, one of which includes Vegetarian Delight. CityMag sits down in the middle of busy lunchtime trade with owner Ben Wong.

“She was a full-time vegetarian and it was just her dream to open it. Back then, there wasn’t much vegetarian options but there weren’t many vegetarians or vegans either,” Ben recalls.

In 2014, Hoa finally decided to retire after fifteen years of trade. Ben explains how, originally, no one stepped up to take over the family business, so Port Road’s Vegetarian Delight shut its doors. Three years later, in 2017, Ben put aside his career in fitness to bring the family dream back to life and moved Vegetarian Delight to the city. 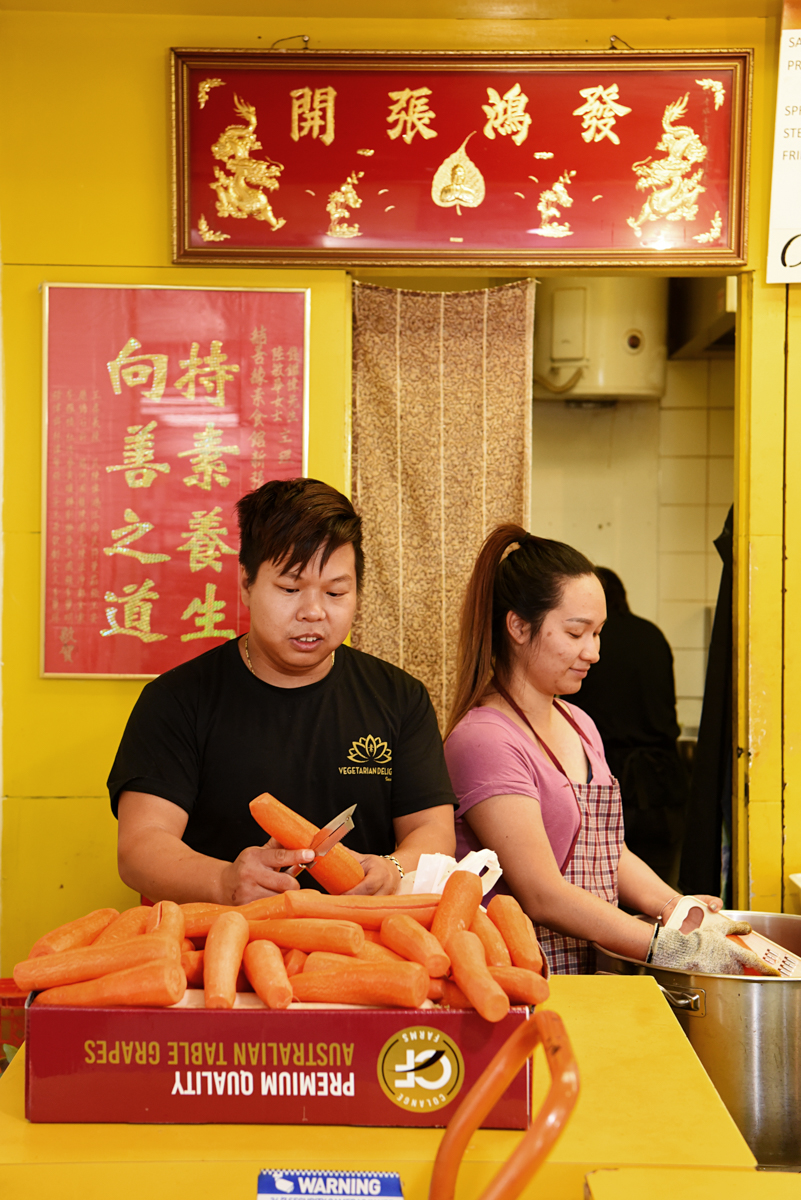 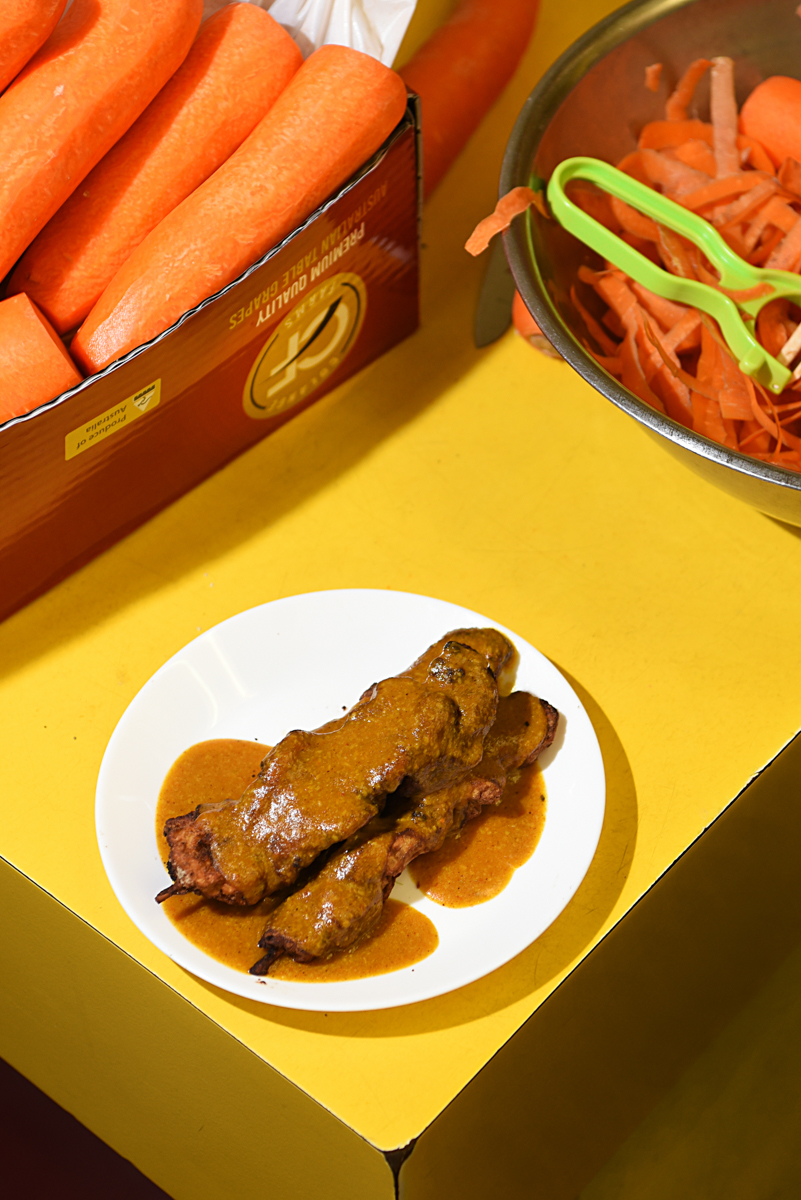 “A lot of people that are not even vegan or vegetarian, they still come here to eat. Maybe because they want to become healthier,” Ben says.

With wife Katrina Nguyen now in the business, Ben hopes to introduce more Vegetarian Delight shopfronts around Adelaide. However, he maintains that the Southern Cross Arcade iteration will remain a cheap lunch option for city workers.

The small stack of plastic takeaway containers sitting behind the counter will be their last, he explains, as they shift towards paper and cardboard packaging. 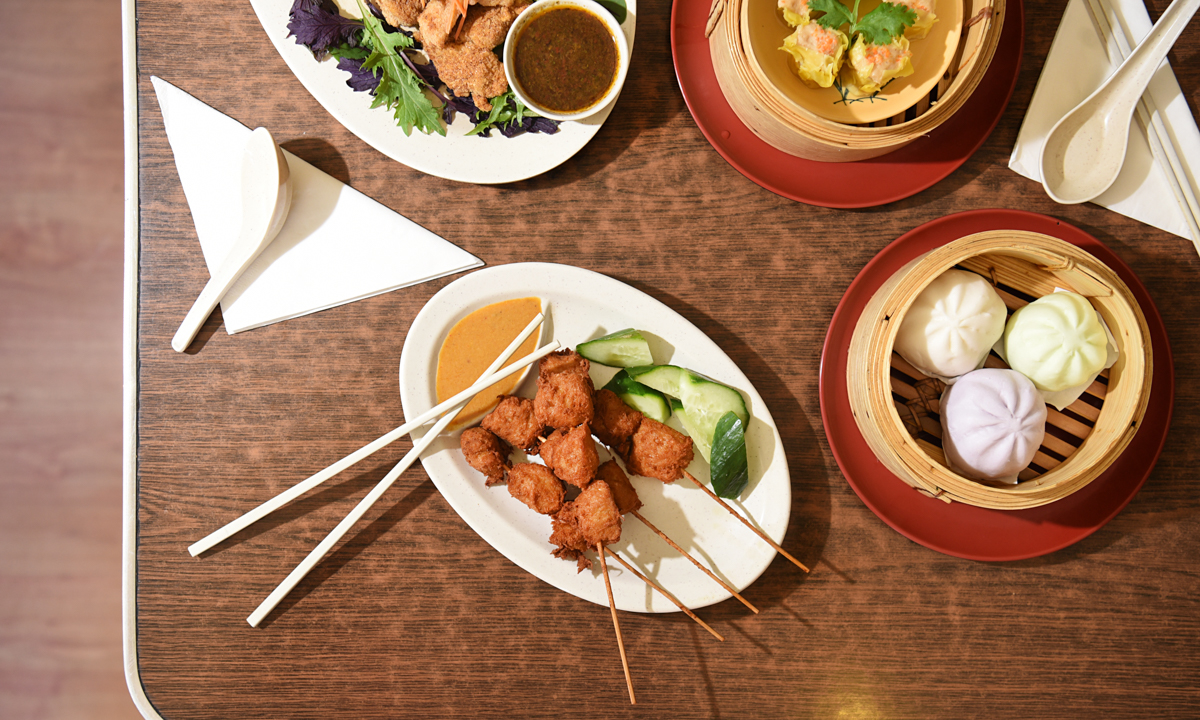 Zenhouse Vegetarian Yum Cha sits on a quaint little block on Bent Street, one of the quieter side streets that line the CBD.

Owners Dixon Wong and Queenie Tan took inspiration from Dixon’s sister and her successful vegetarian tea corner, Teashrine, operating in Alice Springs. After working with her for a few years, Dixon moved to Adelaide and started Zenhouse Vegetarian Yum Cha in 2006.

“Initially, we only sold teas, no food or anything. But people asked if there were any food options so, because of that, we started a very small food menu,” Dixon remembers.

Opening in the mid 2000s meant that Zenhouse struggled with trade for a few years while most people were still only beginning to transition to more plant-based diets. However, over the years, customers have accidentally stumbled in, without knowing of Zenhouse’s vegetarian philosophy.

“Our mindset is about, not just food, but also the awareness of health. Healthy living is something important. It’s not just about working hard, studying hard. Mind, body, and spirit is something we thought was important so we introduced the word ‘zen’,” Dixon says. 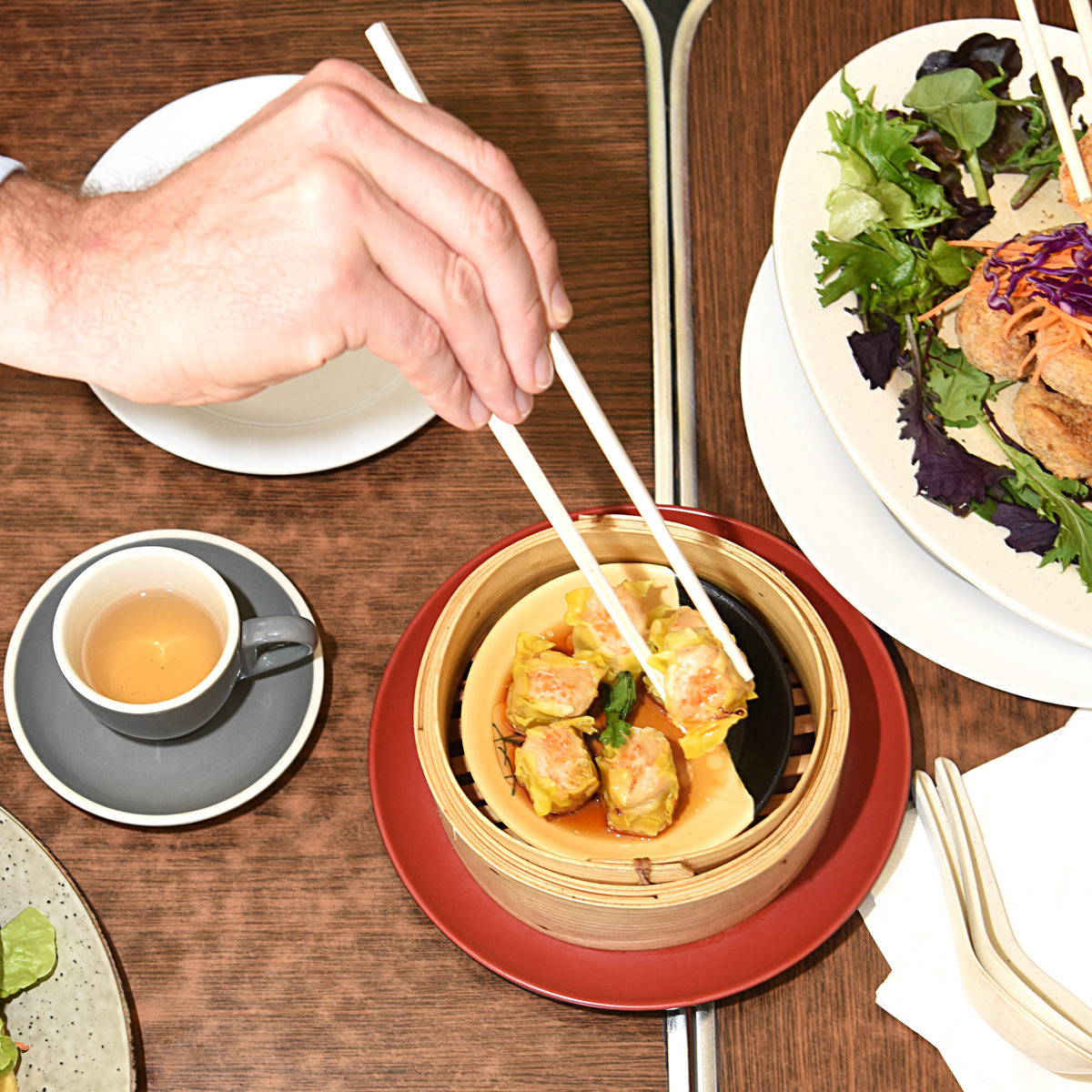 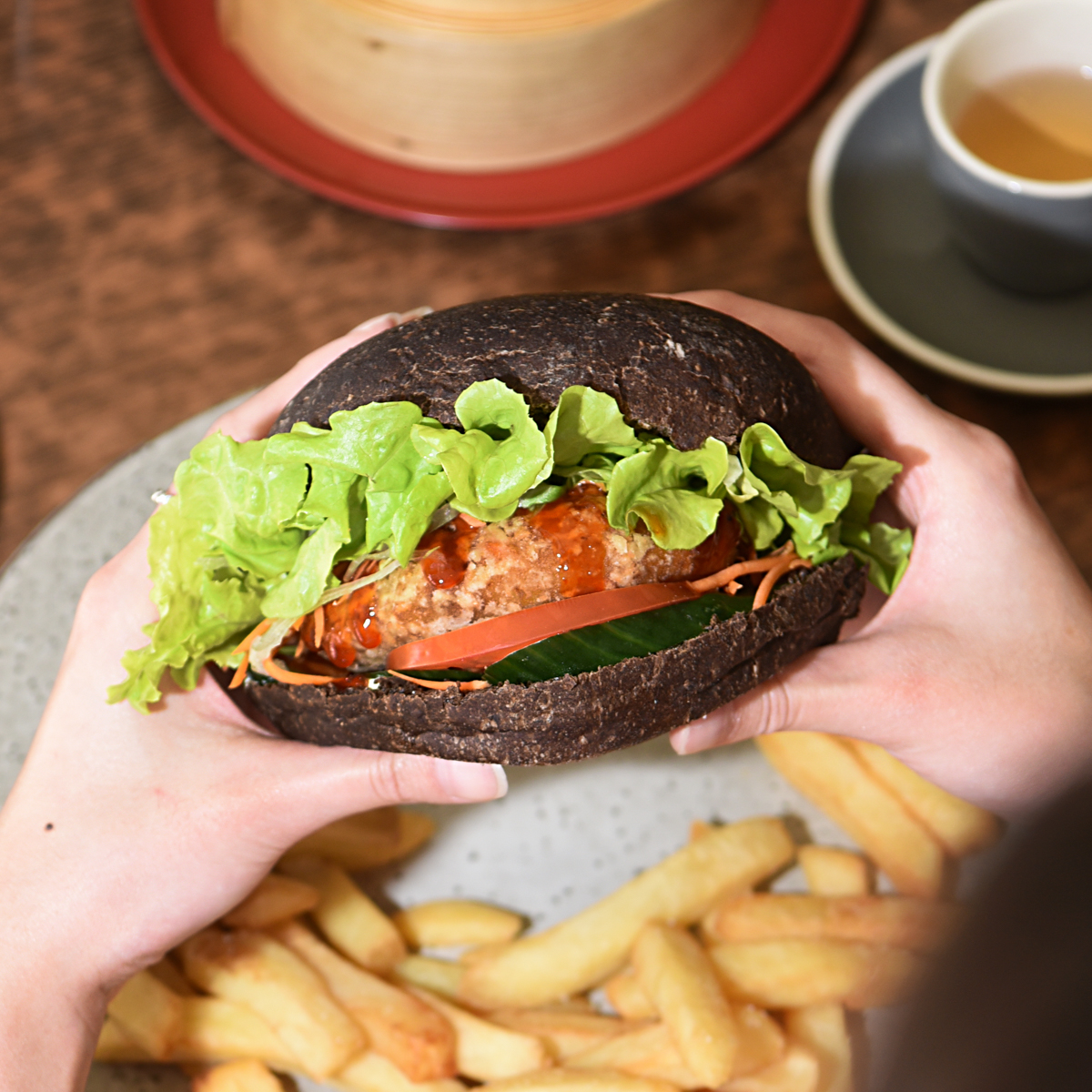 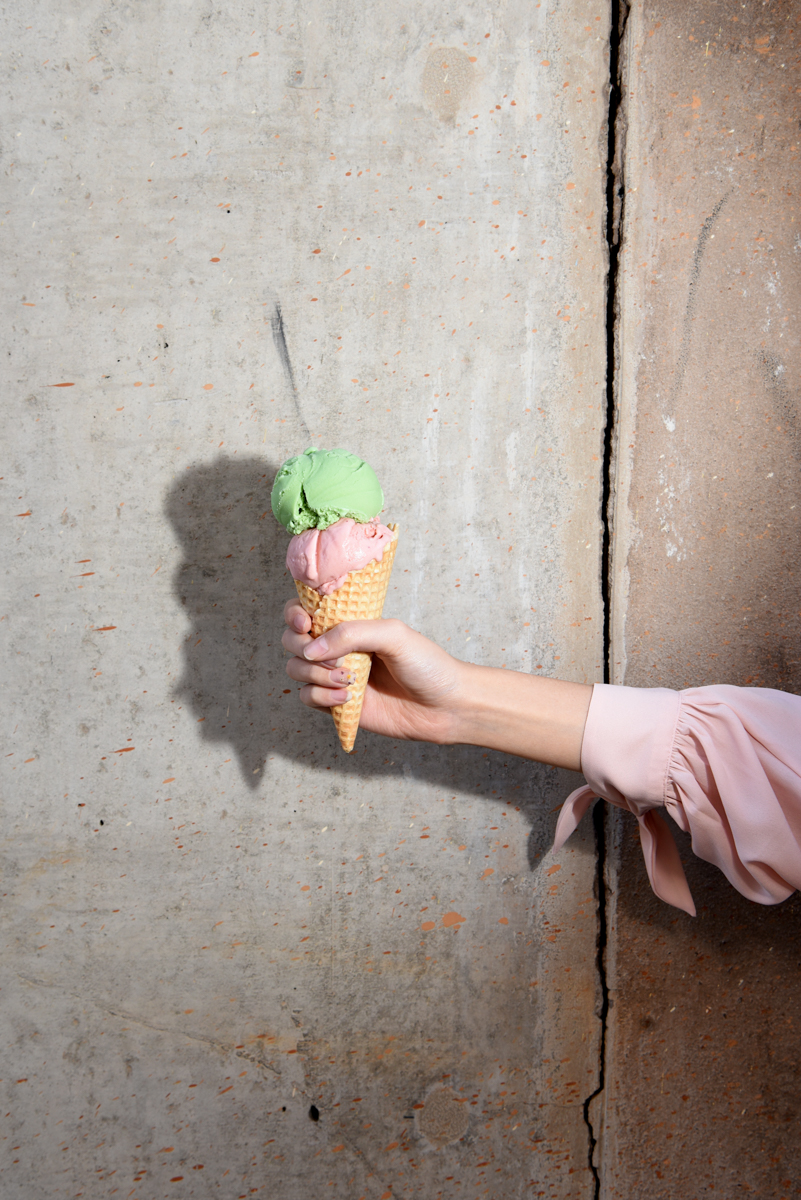 Zenhouse’s menu has a wide variety of lunch and dinner options, including both Asian and Western-fusion dishes, with yum cha available all day.

“We do yum cha a little bit differently here. We don’t want the yum cha to get stale. So you can have it any time you want but we will make it fresh whenever you want it,” Dixon explains.

Zenhouse currently runs a yum cha deal where, for $19.90, customers can order five dishes with choices of anything from spring rolls and steamed buns to wontons and dim sum.

The cheap prices don’t mean a compromise on flavour though, with the team often experimenting and introducing new options to an already extensive menu. This includes the recent addition of their vegan ice cream, which is not only extremely creamy and vibrant with natural colouring, but also made in-house by the Zenhouse staff.

Dixon and Queenie hope to continue sharing the essence of healthy living through their love of food, undeterred by the noisy nature of the city that surrounds them.

“We tell people about how to maintain their inner calmness. Rundle Mall is a very busy street, and then, on a very small side street, you’ve got Zenhouse. People feel relaxed here,” Dixon says with a smile. 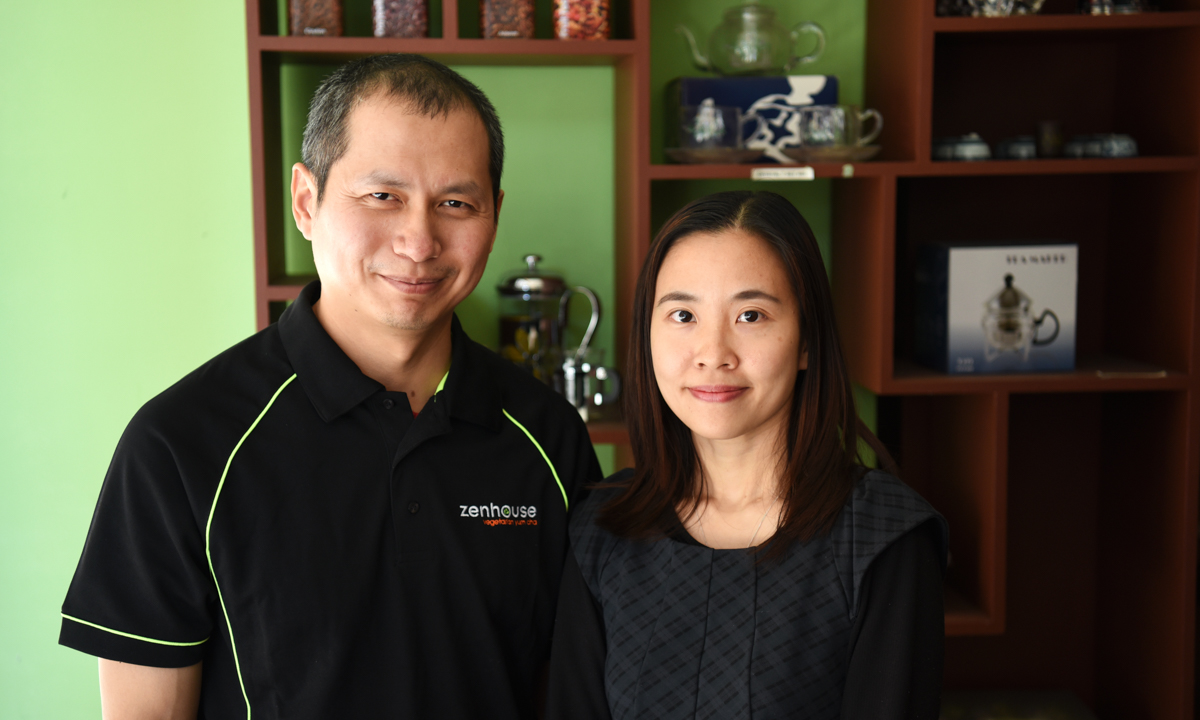