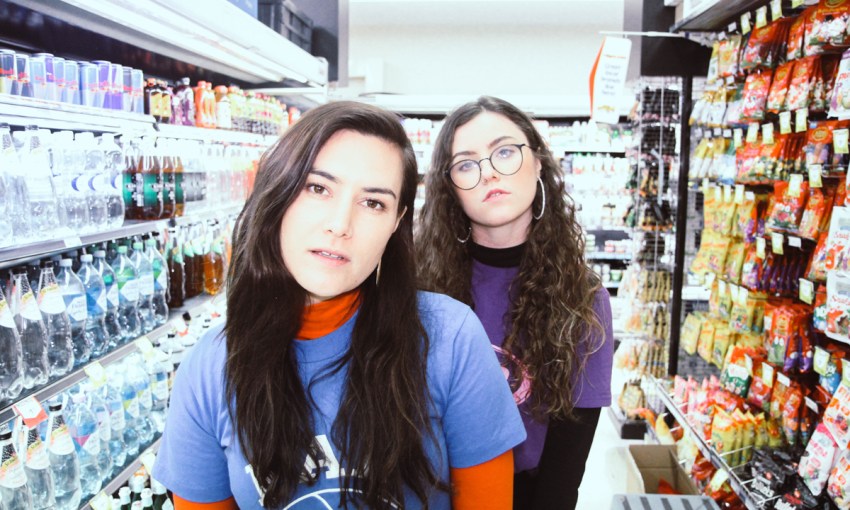 The first single from Wing Defence – Stuck, released back in March 2018 – had been sitting in Skye Lockwood’s back pocket for years.

The singer/songwriter performed previously in the Paul Simon-influenced pop duo Echo and the Empress, and it was during one of that band’s single launches that Skye met Paige Renee Court, her current Wing Defence bandmate.

Wing Defence will open the Adelaide leg of St Jerome’s Laneway Festival in Port Adelaide on Friday, 8 February at 11:35am on the Hart’s Mill stage.

Paige was supporting at the launch gig under her stage name MANE, and the two “just hit it off and became great mates.”

“I went to a few of her shows and I was a big fan of MANE, I loved her music… We were out one night and she was like ‘We’ve gotta start a punk band!’” Skye recalls.

“I was like ‘Oh that’s good because I wrote this punk song a couple of years ago and I haven’t been able to use it because I’m not in a punk band.’”

A couple of months later the two jumped into a studio with producer and co-writer Benny Tamblyn (Flamingo), recorded and released Stuck via Unearthed, and, with very little in the way of a media strategy, immediately found an audience for their two-and-a-bit-minute piece of throwback late-‘90s pop-punk.

“It was really cool, we both, because we got so much attention within a couple of days, we were like ‘Oh shit, what do we do now?’” Skye laughs.

“That’s when Sian [Walden] from Little Acorn came and helped us and now she’s our manager, so that’s been really good.”

Wing Defence has released two songs since; Listerine explores the anguish of living with someone with a drinking problem (accompanied by a clip produced by Dave Court and Lewis Brideson – see below), while Hindsight, airs the frustrations of watching a friend-in-need dig themselves deeper into a rut.

Each release from Wing Defence is lyrically earnest and buoyed by the steady pace and lush organic production – markedly different in sound than the back catalogues of both Echo and the Empress and MANE.

“You’ve just got to be truthful, I suppose. If you want people to relate and feel something for your music, it’s gotta come from an honest and real place,” Skye says.

“I think all of us really love the ‘90s pop-punk, like No Doubt and all of that kind of stuff, and Spiderbait with Calypso, and that was what we were vibing on.”

In the almost 12 months since Wing Defence debuted, the band has already toured extensively, including two interstate headline runs, and they were recently named as the Triple J Unearthed act for the Adelaide leg of St Jerome’s Laneway Festival, opening the day at 11:35am at the Hart’s Mill stage.

The support from the national broadcaster has been an incredible boon for the band – along with the Laneway gig, every Wing Defence song to date has received airtime on Triple J proper.

“It definitely does [help], especially with the support of playing Laneway and stuff like that. It just opens you up to a much bigger audience,” Skye says.

In her day job, Skye is the marketing manager for Music SA, a role that sees her promote local artists and help artists grow. She knows the value in not standing still, so expect to see a lot more of Wing Defence – including a headline Adelaide show in the coming months, and another single before the release of their first EP later in the year.