Thousands of protesters took to Tarntanyangga Victoria Square on Monday in solidarity with victims of rape and sexual assault.

Tears and compounded frustration reverberated through the crowd, against the permeance of gendered violence through everyday life.

On Monday, March 4 Justice Adelaide was one of 35 protests held nationally campaigning against recent sexual assault claims in Federal Parliament.

Men and women wore black and brandished placards, like “DITCH THE DICKS” and “I’m with her”, in an act of solidarity with the women who have made these claims.

Recent cases instigating this public action include the alleged rape of former Liberal Party staffer Brittany Higgins by a colleague, and a historical 1988 rape accusation levelled at Attorney-General Christian Porter (which he denies).

From within the crowd, CityMag saw speeches in the Square, before protesters marched to Parliament House and back. The first speaker was Kaurna and Wirangu woman Rosemary Wanganeen.

Rosemary tells the crowd colonisation and the “Western patriarchal construct” created the “greater potential” for society’s male elite “to live in privilege”.

“Those living in a society with a Western patriarchal and colonised mindset depend on us as women to fall into a rabbit warren of hopelessness, in the hope that believing is all too hard. But we’re not going to do that, are we?” Rosemary says. The crowd responds: “No”.

“We are going to keep making noise,” Rosemary continues, “and yes, we’re going to get emotional.”

CityMag speaks to a number of protesters while the speeches rage on, including a 67-year-old “survivor of sexual assault”, who we’ve chosen not to name.

She says while working in the corporate world she’d “seen a lot” in terms of sexual harassment. “Enough is enough,” she says.

In another group of protesters, we meet Barbara and Quintin McIntyre. We ask why they’re here. Barbara breaks into tears. Quintin, her husband, answers: “[Barbara] told me before that she wants things to change so her granddaughters don’t go through what she went through.

“You don’t need another review. You need things to actually change.”

Bolstered by a petition boasting almost 22,000 signatures, the March 4 Justice organisers and protesters have gathered to demand four things:

Barrister Clare O’Connor also spoke at the event, saying this national effort was spurred on by the last three weeks of “disgusting information” emanating from Canberra, and government leaders need to commit to reform.

“There’s been a very, very good inquiry with 55 recommendations that came down from the Human Rights Commission. It explained how to make a workplace safe,” she says, referring to the Respect@Work report.

South Australia has been in the throes of its own toxic parliamentary issues, with the publication of the Acting Equal Opportunity Commissioner’s recent report into parliament finding sexual harassment “prevalent” and “the problem and its solutions sit at an organisational and cultural level”.

The report includes 16 recommendations aiming to prevent and appropriately handle sexual and discriminatory harassment in this particular workplace, however the document reiterates sexism will only really be eliminated “through concerted efforts to create cultural change”.

Another protester, who wished to remain anonymous, says she believes the current government and their “lack of acknowledgment of what people are seeing and feeling” are leaving people “disappointed”.

A former State Government employee Frank Kinner says he turned up to the protest because he’s “sick” of how many women are assaulted and harassed by men.

“I’m not ashamed about being male but I’m embarrassed,” Frank says.

“There needs to be more conversations between fathers and sons.”

Rebecca Mills and Lorna Haynes are both nurses at the Royal Adelaide Hospital and say they are “heartbroken” and “angry” by the number of assaulted women they see presenting to the emergency department.

“In Parliament, there are all these sexual harassment claims, and it’s being dismissed by Scott Morrison and like, ‘Someone’s daughter? I’ll talk to my wife about this.’ It’s not good enough. Actually, do something about it,” Rebecca says.

Australia’s reckoning isn’t happening in a vacuum. Lorna has previously lived in London, and she references the murder in that city of Sarah Everard, and the grief and public outcry it has sparked overseas.

“I would walk those streets as well,” Lorna says. She believes Sarah’s death would add “more momentum in our steps today.” 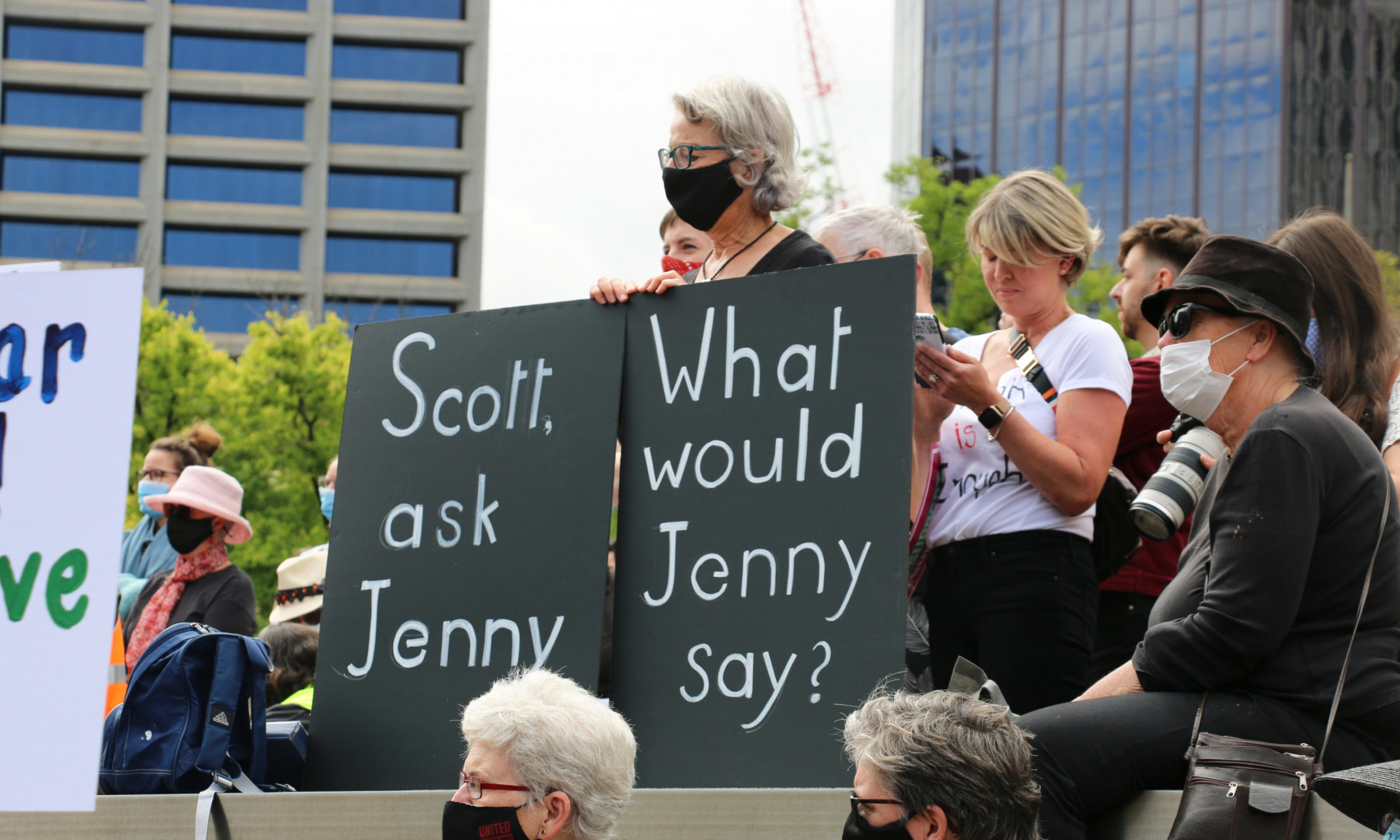 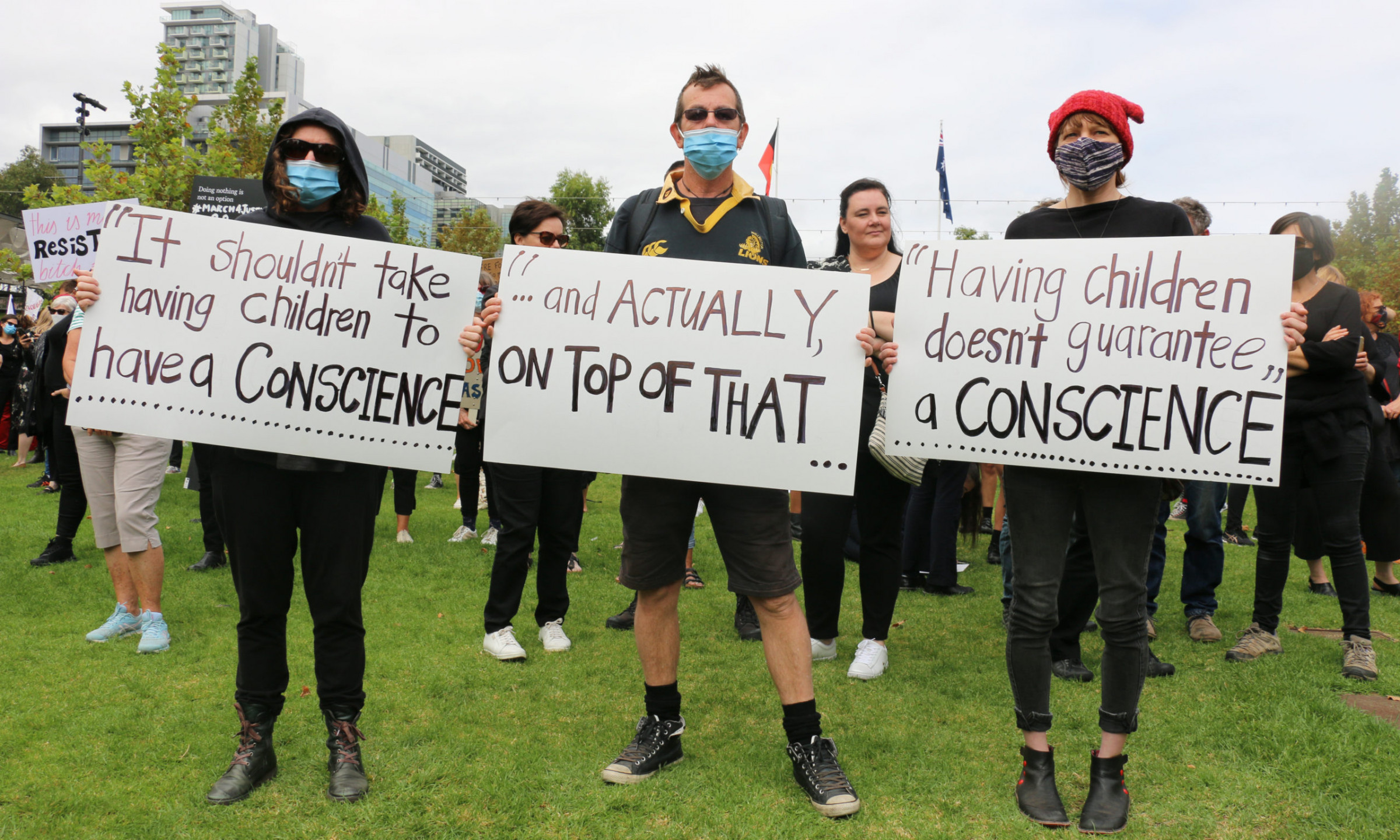 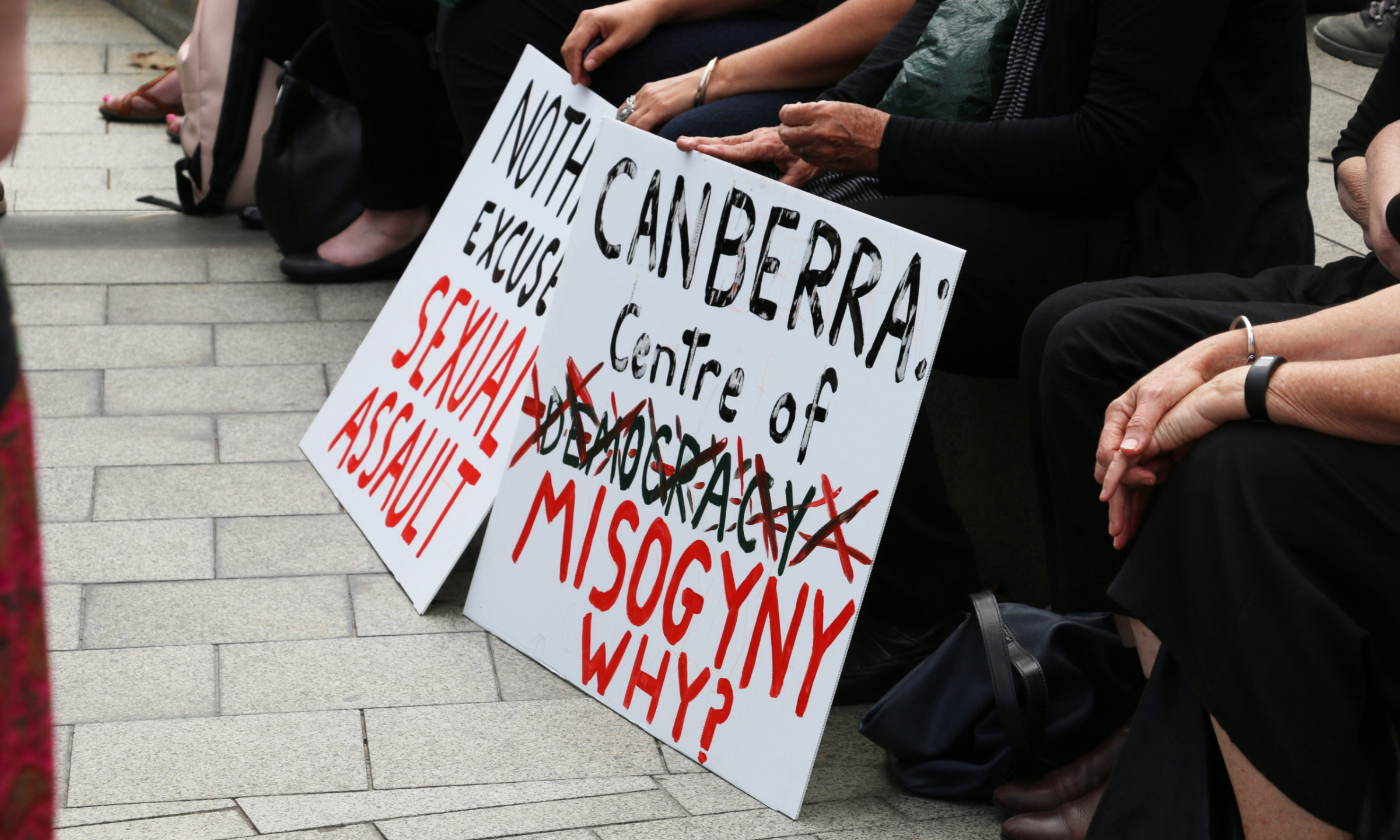 Iranian physician Dr. Afsaneh Moradi takes the mic and addresses the crowd, explaining that when she migrated to Australia from the US to accept her “dream job”, she was sexually assaulted in the workplace.

“And I can tell you, I’m a strong woman and I was mistreated, misjudged and sexually harassed in my very first job here in Australia,” she says.

“As a GP, you can imagine we always tell our patients, especially female, especially from my background, Iranian women, that we are raised and told to keep your mouth shut. When a man does something wrong, you just don’t talk.

Director of the Working Women’s Centre, Abbey Kendall, says “today is a day for truth-telling” – and the stats speak for themselves.

“The good news is that we have a roadmap… it’s called the Respect@Work Report. If these recommendations are adopted and funded properly, they will reform our archaic laws and judicial processes.”

A pair of protesters, Jo Thomas and Steph George, reiterate this to CityMag, arguing all the information to improve parliament’s culture is there and it just needs to be implemented.

“The big aim was that the recommendations from the sexual harassment in the workplace report be implemented and legislated in all workplaces, not just in Parliament House. That’s probably the big one for me,” Jo says.

“And there’s a recognition of the prevalence of sexual violence against women and then appropriate funding, and support for survivors. And what, only five per cent get reported?

“I’ve spoken to people who’ve reported it, and the reporting of it, to quote them, was as traumatic as the event. It’s all hearsay but that was a huge piece for me to go, ‘That’s really problematic’”.

Protester Heather Merran – who’s wearing a witch’s hat in reference to politician Peter Dutton calling a female journalist a “mad fucking witch” – is here to represent herself and her 12-year-old daughter, who wanted to attend but is at school.

Heather says that as a mother and knowing her daughter is aware of what’s going on makes her feel “dreadful”.

“I think she has a dawning awareness that she’s in danger of being treated as less important because she’s female,” Heather says.

CityMag met two students who were allowed to miss a day of school to be at the protest, Minka Dorsey and Claire Edmonds-Wilson, and they say they’re here because “this is our future and it’s relevant.”

“It’s about us,” Claire explains, “and as young teenage Australians, it has everything to do with us.

Minka says she wants the March 4 Justice to bring about more discussions of what consent and appropriate behaviour generally looks like, and for the onus to be on men instead of women.

“Going to an all-girls school, it’s very much pushed on us of what we can do to avoid things happening to us, and we need to change the narrative to what boys can do.”

If this story raised issues for you, LifeLine is available 24 hours a day, seven days a week. Dial 13 11 14. Beyond Blue and headspace are other national organisations offering comprehensive mental health support.