Voices in the trees

Through a synthesiser and a sapling river redgum, artist Heidi Kenyon has found voices in the trees of the Adelaide Botanic Garden and brought life into the Museum of Economic Botany.

From afar, the Santos Museum of Economic Botany stands still and silent within the Adelaide Botanic Garden.

From little things… is open every day at the Santos Museum of Economic Botany until 29 July.

Heidi is also holding live soundscapes from around the Botanic Garden, demonstrating the installation at various locations from 1pm until 3pm every Saturday in July.

On any other day, the museum would invite we, the living, to quietly walk between glass-fronted cabinets full of the dead – expired and preserved plant material, collected with the intention of teaching the public to use nature to its advantage.

On the day CityMag visits, the room is livelier than usual. As we enter, a rush of notes spills from a synthesiser at the back of the room cloaked behind thin wooden dividers. The flurry of sound slows into a haunting arpeggio in minor key and finishes midway through a progression.

We peer behind the divider for a glimpse of the composer and find a potted river redgum sapling standing on a plinth, an alligator clip attached to one of its leaves and a metal spike stuck in its soil. This is the artist at work. 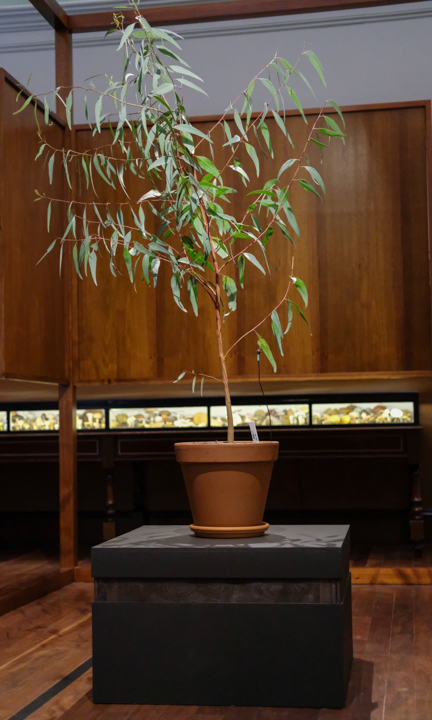 The musical sapling is one part of From little things…, an installation Heidi has created in partnership with the museum, and as part of The Guildhouse Collections Project.

The clip and the spike attached to the tree pick up on the energy surging between the two points. As the energy changes a signal is sent to a synthesiser inside the plinth, triggering musical notes, Heidi explains.

Occasionally, Heidi will switch the synthesiser to instead trigger samples she has recorded of her own speech – literally giving the plant a voice – but as the notes echo around the space, its hard not to anthropomorphise the tiny tree and make assumptions of its mood.

“This place is the oldest museum of its kind in the world,” Heidi says, “so these Museums of Economic Botany used to be everywhere, teaching settlers and colonists about what you could do with plant material, and this idea of being economical.

“I guess part of what I’m doing is trying to get back to the basis of why these sort of places existed, and our relationship with plants.”

As we speak, the tree moves between busier moments and quieter moments, and we consider what it might be responding to, and whether this amplified biofeedback might in fact be an example of the kind of conversation every rooted plant has with its surrounds. As if after years of standing at the base of enormous decades- and centuries-old trees, contemplating them like passive sculptures made from nature, we were ignorant to the ways they were actively interacting with their neighbours, and with us.

Heidi has experimented with this concept for a while and has noticed a change in her own behaviour. In previous works, she has cut shapes into leaves and used them to project shadows. This suddenly feels like more of a sacrifice on the part of her subjects.

“I feel differently bout that now,” she says gingerly. “It’s not to say that I wouldn’t do it, but it makes me think about those things in a different way.”

The other half of the exhibition sits next to the soprano sapling – a glass cabinet blacked out on three of its four sides. The fourth is open, but hidden by a run of thick black curtain. Heidi invites us to step inside.

In darkness we see apothecary bottles sitting on shelves, seemingly holding cuttings from another redgum sapling in what smells like a Eucalyptus solution. The glass jars are still, but the twigs and leaves move as if Heidi was also able to bottle the breeze.

We step out and Heidi explains the illusion: the cabinet is a camera obscura apparatus projecting images of another river redgum sapling (hidden in the blacked out section of the box) into the bottles.

“I tried to reference the museum; this cabinet was from here, and then I’ve just built this structure inside, thinking about specimens and those sorts of things,” she says.

“The overarching point is probably that I want to slow people down and get them to look at things that are quite familiar, but shift perspectives and see something in a different way.”

Showing new perspectives is the function of both art and science, but each have distinctively different methodologies and underlying philosophies. This is what makes Heidi’s presence in the museum so interesting.

“Tony [Kanellos, curator at Museum of Economic Botany] was saying, if we had a botanist in here to do a similar research project, the outcome would be very different, and perhaps in a way that’s not quite as accessible for an audience,” Heidi says.

“I was reading something, this book by Rebecca Solnit, [A Field Guide to Getting Lost], and she’s talking about artists and scientists working at the edge of mystery, or at the edge of knowledge, and kind of looking for something and discovering something. The scientists will pull in the answers like fishermen, whereas artists will take people out into the dark waters, and I like that idea.”

There are no answers in the darkness of the cabinet, or the sapling’s song, but there are questions.