A filmic theatre work requires a score that is informed and obscured by the action on stage. Producer Mario Späte and actor and musician Max Garcia-Underwood speak about that balance in House of Sand’s The Split. 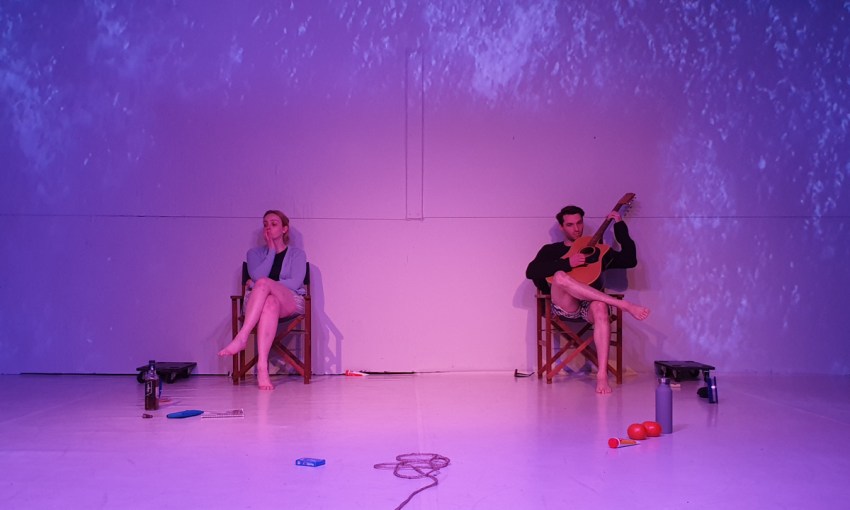 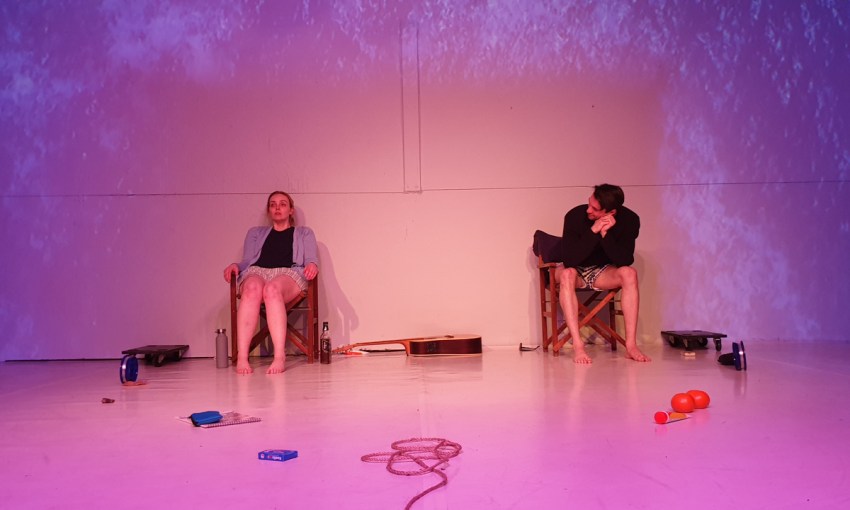 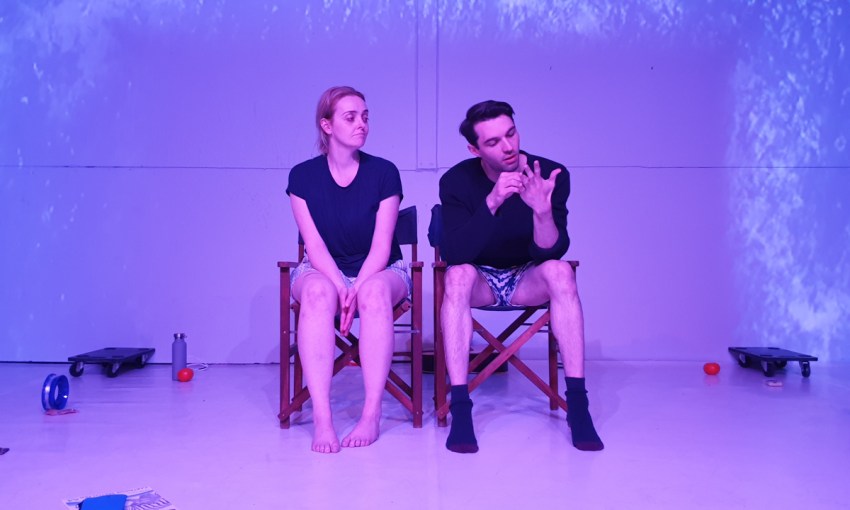 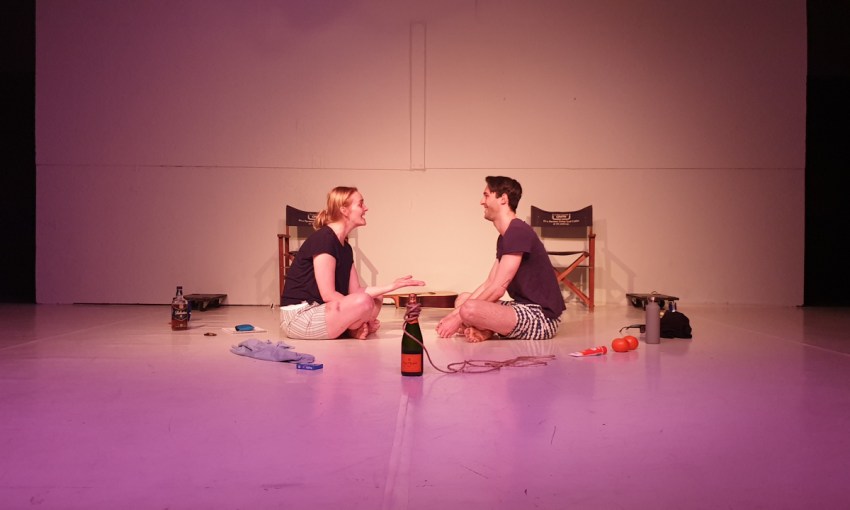 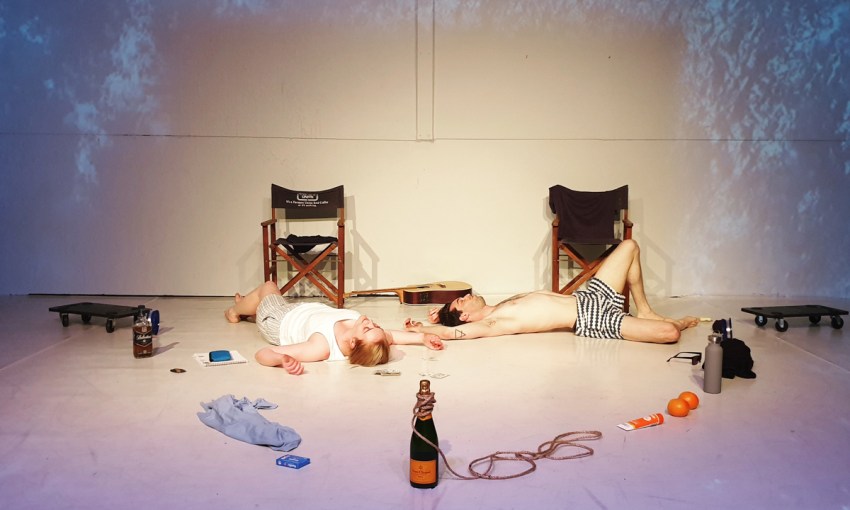 When CityMag asks actor Max Garcia-Underwood for an overview of the House of Sand production The Split, currently appearing as part of Rumpus Theatre’s inaugural season, he smiles coyly.

“We don’t like to say too much about it, because it’s fun to see how people view it. But basically, it’s two people on a boat and something is obviously about to change,” he says.

Max was drawn to the project as soon The Split’s director, Charley Sanders, sent through the script. Because of the play’s intimate scale, the project aligned with Max’s preference for naturalistic narratives.

“There was a lot of opportunity to do that really small, nuanced acting that I personally really like,” he says.

“It was just one read through of the script and I knew this would be a really cool show to do.”

Max also has a background in music; he plays guitar for Adelaide musician Stellie, and he worked primarily as a session musician prior to embarking on an acting career in 2015.

For such a sparse and nuanced production, the musical score becomes an incredibly important piece of the performance, and so Max worked alongside music producer and founder of theatre company The Misery Children, Mario Späte (sometimes known as Badcop).

“I came on board two or three months before the show, so without knowing a lot, which I find is good,” Mario says.

“I’m regularly involved with [House of Sand’s] work, but also, a similar thing to what Max said, it feels very much like a film, almost, and so to get to score something where there’s a lot of room to breathe is really nice.”

The duo started by spending a day together improvising on the mood and emotions of key moments throughout the play.

With a strong basis built, Mario and Max took what they’d made into rehearsals and felt out how it interacted with actors on stage. The initial drafts were “lyrical” and guitar-heavy, Mario says, and so he took the work back to the studio and stripped it all back.

“Because of the nature of the work being really naturalistic and so conversational, the guitar was almost a third person trying to speak at the same time,” Mario says.

“It was almost like taking those top elements out of the music and then what was left was this emotion bed.

“And the thing is, it is an unusual setting – two people on a boat – and so the music is this current, and the idea is to invoke that feeling of that big expanse and this undercurrent of things going on beneath the surface.”

While still not giving much away in the way of a storyline, Max tells of the creeping “environmental existentialism” at the heart of the play, while being subtle enough to perhaps be missed by anyone focussing more on the relationship between the characters.

Similarly, on stage, much of what that play’s about is in what’s not said, meaning the score and the actors must fit together in an incredibly delicate way.

“Sometimes [the music is so impactful] that you actually need to play against it. It can inform too much,” Max says.

“Sometimes you need to be reminded the music is already doing that job, you don’t also need to do it, because it’s a bit like hitting the audience over the head with emotion.”

“You’ve got that layer, then the staging, which is giving you more information, then the words and the emotion that the actors are bringing to it, and those three things, you don’t ever really want them to all be doing the same thing.

“You want to have it be a puzzle that the audience can work out.”

For both Max and Mario, scoring theatre provides a broader canvas on which to draw out emotional landscapes, and have an audience live in them for an extended period of time, as opposed to the attention-grabbing demands of writing in the contemporary music space.

“With contemporary music, you’re just trying to be concise, I guess, and with score and theatre, there’s so much more breathing space and room, and sometimes you can be a little bit more delicate in how you’re communicating something.

“It feels like a luxury, you know? And it’s also so great in that you’re serving the work, it doesn’t have to represent someone’s emotion or someone’s state of being, or someone’s artist persona or whatever – it’s about, this is for the show and this has to serve the piece, and it would be great if people didn’t even notice that there was a score, but they felt that it was there.”

The Split is currently showing at Rumpus Theatre at 100 Sixth Street in Bowden, with final shows on 2 & 3 November. For more information on the show and to purchase tickets, see the Rumpus website.