In 'The Ambassador', Melbourne-based artist Eugenia Lim uses photography, video, installation and performance to travel through time and space in search of the Australian identity.

Eugenia Lim’s The Ambassador is a sprawling exhibition. It encompasses photography, video, installation and performance as it travels through time and space in search of the Australian identity. And it all began with a single photograph.

The picture in question is of the Melbourne-based artist’s parents posed in front of a large abstract sculpture, Ron Robertson-Swann’s Vault. They had recently arrived from Singapore when it was taken in 1980, the year before Lim was born, and though it doesn’t show up in the black and white image, the sculpture is bright yellow. This led the Melbourne press to dub it ‘The Yellow Peril’, a title that gives the image an entirely unintended subtext.

This collision of personal and political history led Lim to embark on an exploration of her own family’s story of immigration, as well as that of the Chinese diaspora in Australia at large. To do so she created the persona of the gold-suited Ambassador, “an out of time diplomat who travels through the Victorian goldfields, and then through the architecture of Australia and also sets up a factory along the way.”

She laughs that the journey has been spread over three very busy years involving “lots of costume changes and a couple of gold suits,” but it’s been a fruitful period. The Ambassador moves through three bodies of work, and they are collected in her first institutional solo exhibition, one of four solo exhibitions that together comprise Samstag’s Adelaide//International. 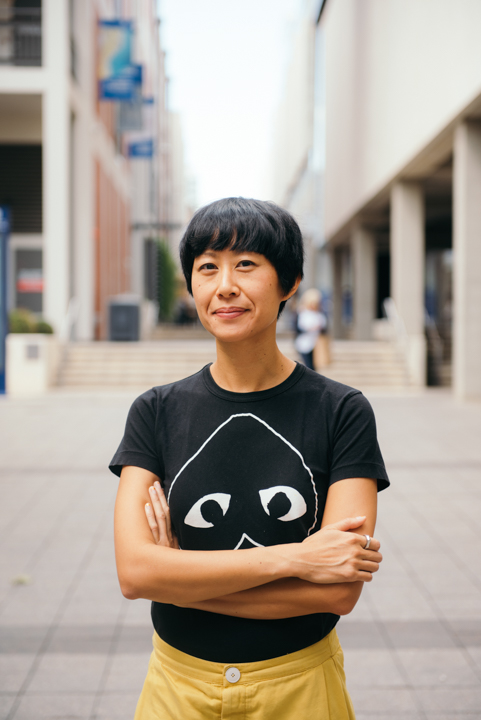 The first series features that original photograph printed on a shimmering gold Mylar space blanket next to an image of Lim in character as The Ambassador. She cradles a replica gold nugget at Sovereign Hill, the goldfields-era theme park that presents a conspicuously whitewashed snapshot of the time. It’s a vision true to the colonial histories that dominated the school curriculum when Lim was growing up, and one that presents an impoverished (and historically inaccurate) Australian identity based on a monoculture that never existed. Even today, she feels that the country is “not really” post-colonial and her work reasserts the Chinese presence that was largely written out of our history.

Similarly anglocentric perspectives evolved throughout the former British Empire, and the four exhibitions in Adelaide//International (two from Australia and one each from Singapore and Aotearoa New Zealand) all interrogate this dominant narrative. Lisa Reihana’s In Pursuit of Venus [infected] does this by literally re-inserting Indigenous, Polynesian and Maori people into the landscapes of colonial wallpaper. The epic work, a decade in the making, is sumptuously realised as a scrolling panorama that spreads across 25 metres and 3 trillion pixels and is astonishing in its detail.

By hosting four separate exhibitions rather than pursuing a single overarching curatorial brief, Samstag has relinquished some of its institutional control to the artists. It’s a move that pays dividends by allowing multiple perspectives to emerge and co-exist in defiance of historical hegemony.