In May, soil in the Parklands met with flames in the first approved cultural burn in Kaurna Yerta Adelaide since colonisation.

CityMag camped with Kaurna elders, uncles and young men the night before the event to hear what this means to them and for country.

Young Kaurna man Drew Kilner clicks a blue Bic lighter to life and a small flame leaps onto a long piece of grass.

Amid a chorus of crackles and pops, the flames slowly spread.

The 22-year-old has been waiting years for this moment.

“As soon as I put that fire on country, it was like an awakening,” Drew says, standing in the Adelaide Parklands burn site.

After a gentle charring, the ground is a mosaic of black and green patches. Wipe away the ash and small shoots are ready to burst through.

“I’ve been thinking about starting this fire for two years. It’s good to be able to finally do it,” he says.

Drew’s Kaurna elders have been waiting much longer.

Fire-stick farming – also known as cultural burning – is a land management practice that has not happened officially in the Adelaide CBD since colonisation.

Twenty-four hours before the scheduled burn, CityMag dragged a swag into the south-west quadrant of the city’s green belt.

Kaurna elder Jeffrey Newchurch invited us to sleep out with a group of elders, uncles and young Kaurna men in Tuthangga Carriageway Park.

This is where the burn would take place.

A warm hug from Uncle Jeffrey welcomes us to the site, which has eight tents orbiting a large fire.

Hundred-year-old gumtrees sway in the background.

Less than 100 feet away, South Terrace hums with traffic.

“For too long we carried that hurt and that anguish of yesterday, what’s been done to us,” Uncle Jeffrey says.

“Having these programs and having the ability to sit at a camp, it’s so spiritually good for you.”

Meeting on the night before the cultural burn is important, Jeffrey says.

It creates common ground that “starts that journey of healing, with fire generating warmth.”

We sit by the campfire on a long log next to Barkindji man Junjardy Aldridge.

Junjardy says he’s here supporting his “mob, family and other communities” because it’s the right thing to do, and because “I feel like we’re making history.”

Uncle Jeffrey chairs the Kaurna Yerta Aboriginal Corporation – the Native Title group recognised as being present in metropolitan Adelaide and the Hills for 50,000 years.

Three years ago, he contacted the Adelaide and Mount Lofty Ranges Natural Resources Management Board, now Green Adelaide, about a cultural burn in the Parklands.

They were receptive to the idea.

Cultural burning has been used by Indigenous people for tens of thousands of years.

Practitioners know and are able to read the land, vegetation and fuel loads in order know the right time to start a slow-burning and measured fire.

The fire clears the land in order to encourage plant growth, and ensures animals and insects can flee peacefully.

It’s a gentler and more intuitive take on prescribed burns.

With the support of the City of Adelaide, a cultural burn workshop was organised in 2019, led by Tagalaka man Victor Steffensen, the country’s foremost fire-stick farming expert.

Victor also sits around the campfire with us.

He speaks as the fire sizzles and our fingers defrost.

“When you look at all the trees, each tree tells us when to burn, what soils they are. They all have different timings.

“When we have dead trees everywhere, and these fellas (wattle trees) taking over completely, that’s what we call upside-down country.”

Victor says fire has many uses; not only does it have the utility of encouraging the right kind of growth in the soil, but it warms the soul.

“Here we are, sitting around fire,” Victor says, smiling.

When asked about his heritage, Yuandamarra says he’s “a blackfella that goes the way the wind blows”, but he’s also a well-versed storyteller.

Over hours, he takes us across thousands of kilometres in conversation, speaking about corrupt politicians, clever animals and why time can be elastic for Aboriginal people.

“When you encourage these opportunities around the fire with different elders and voices to come together,” he says, “it’s going – what do they call it? – back to the future.

“It’s a little bit like that. Going back to the knowledge.”

The next day, the cultural burn takes place, with a range of dignitaries and political folk in attendance to witness the moment.

Many have their photos taken to document the Kaurna Kardla Parranthi project.

A hundred or so members of the public huddle around the Kaurna men as they gently swat at the small flames with eucalyptus branches, softly herding it up and around the Parklands. 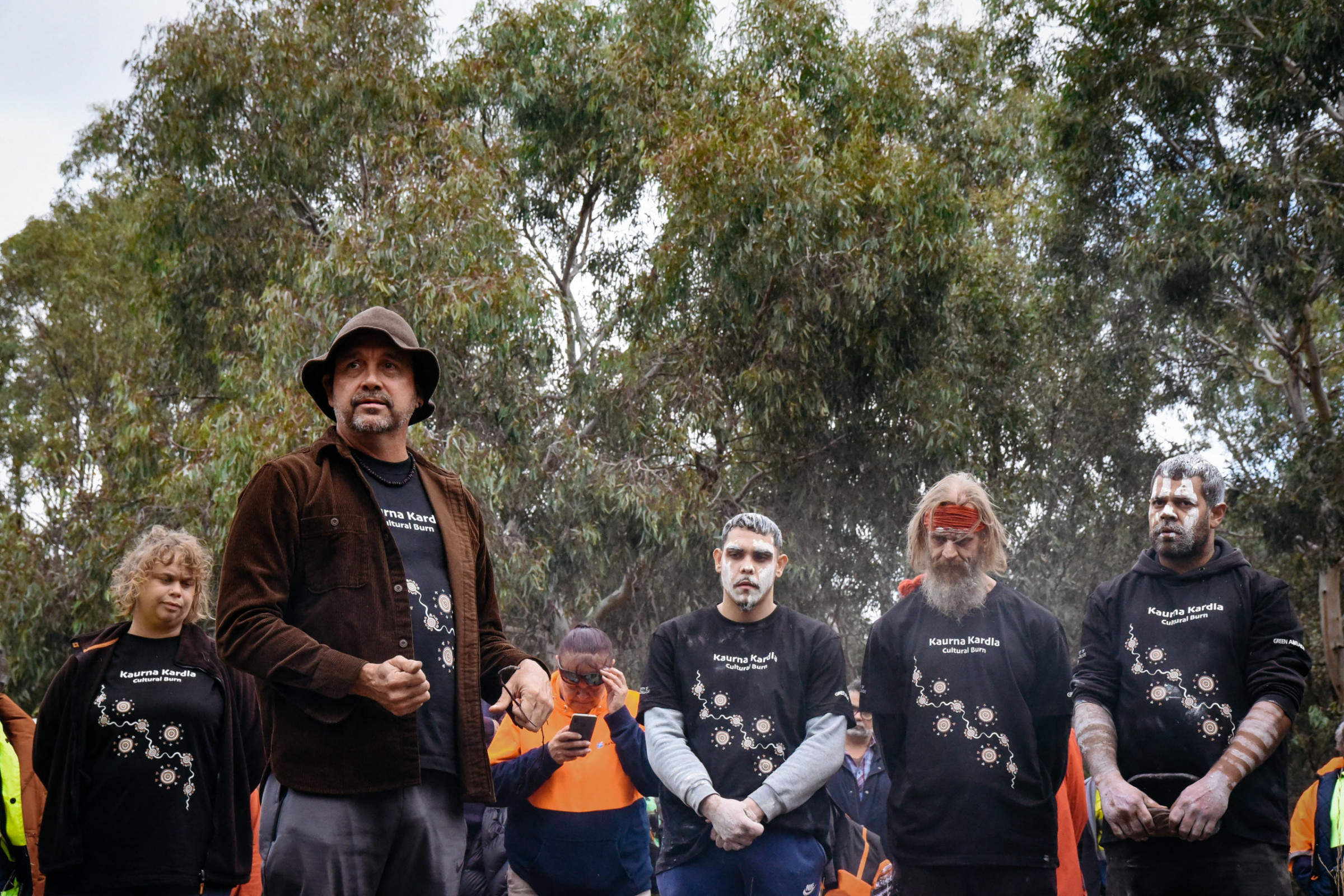 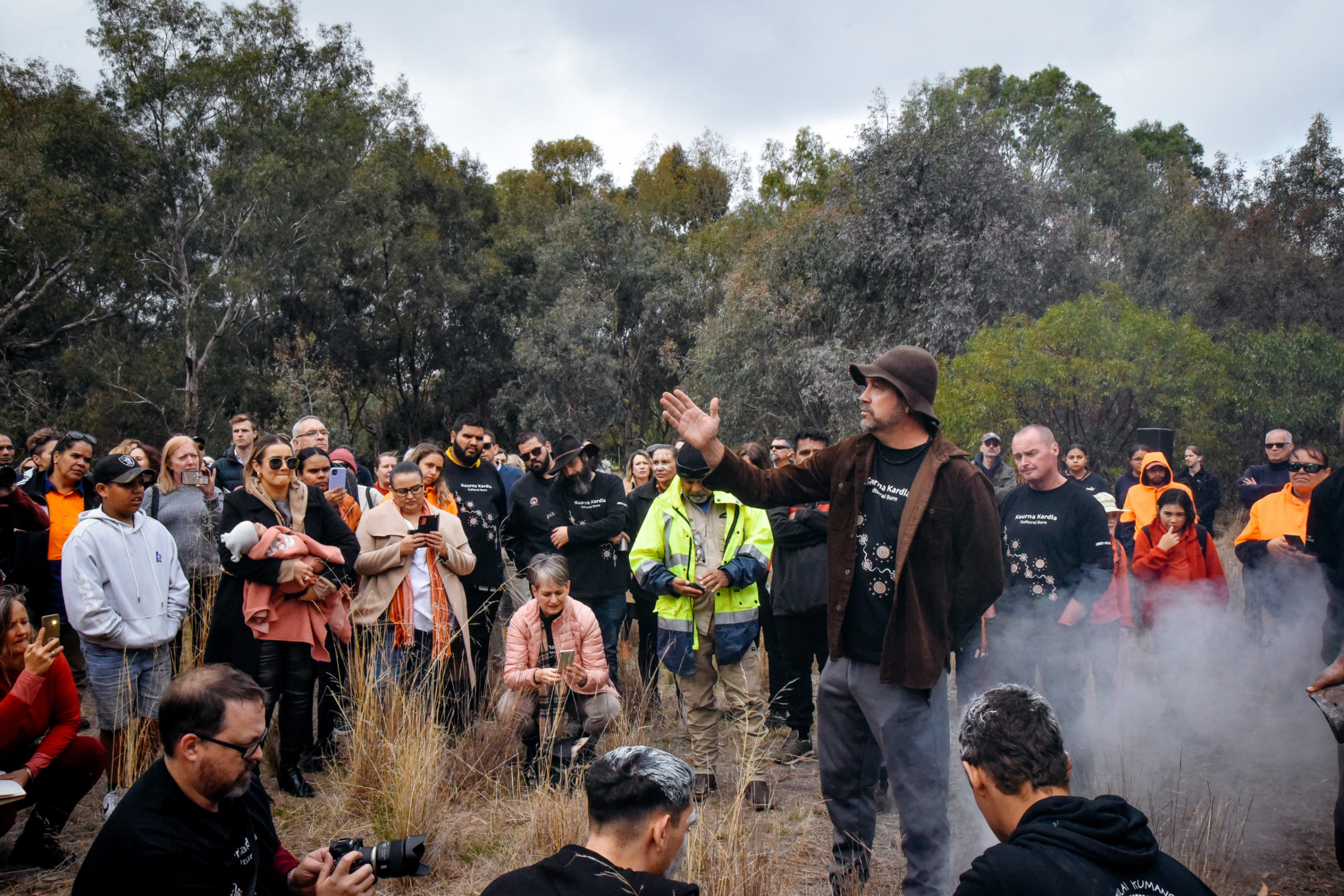 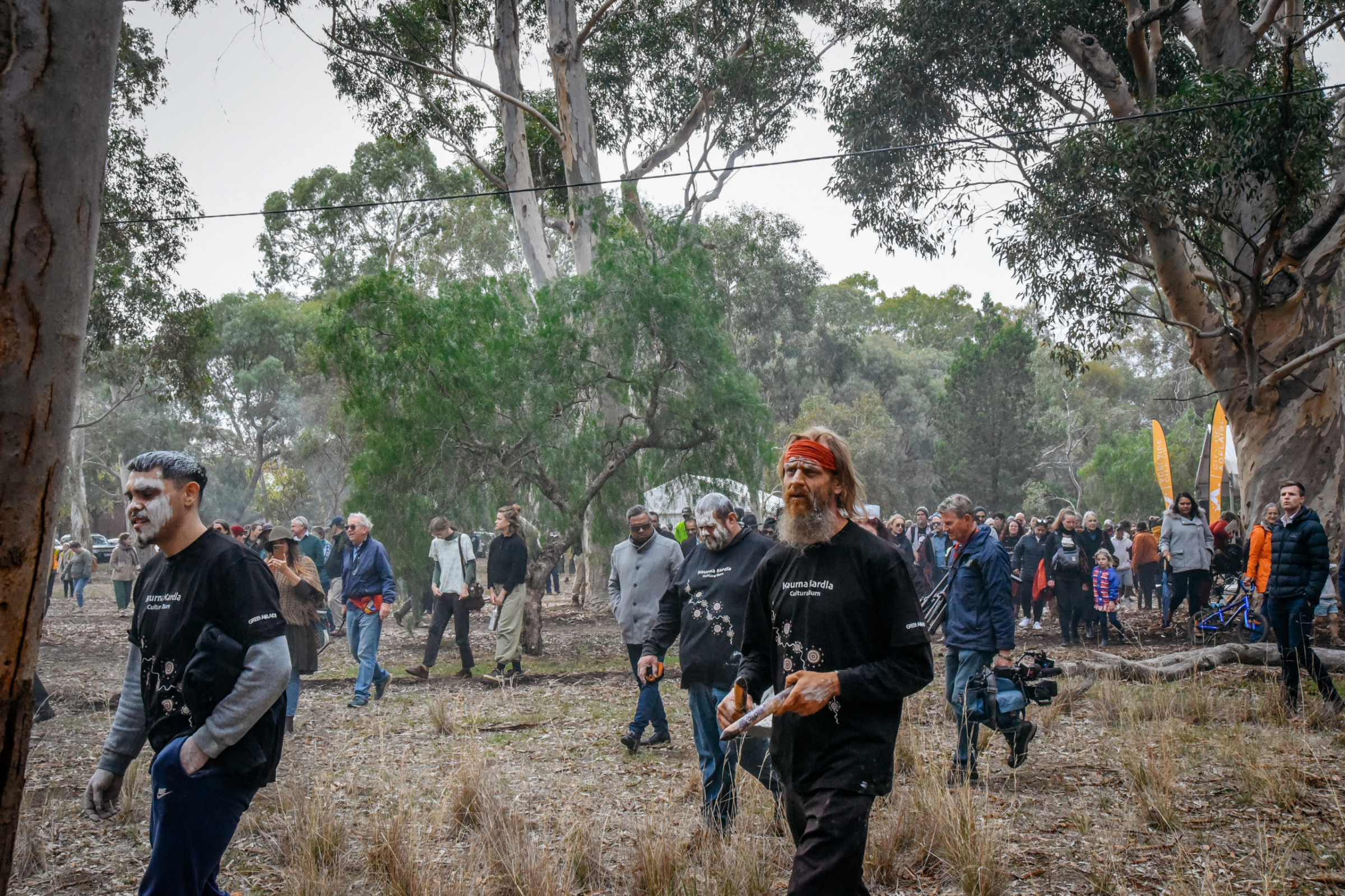 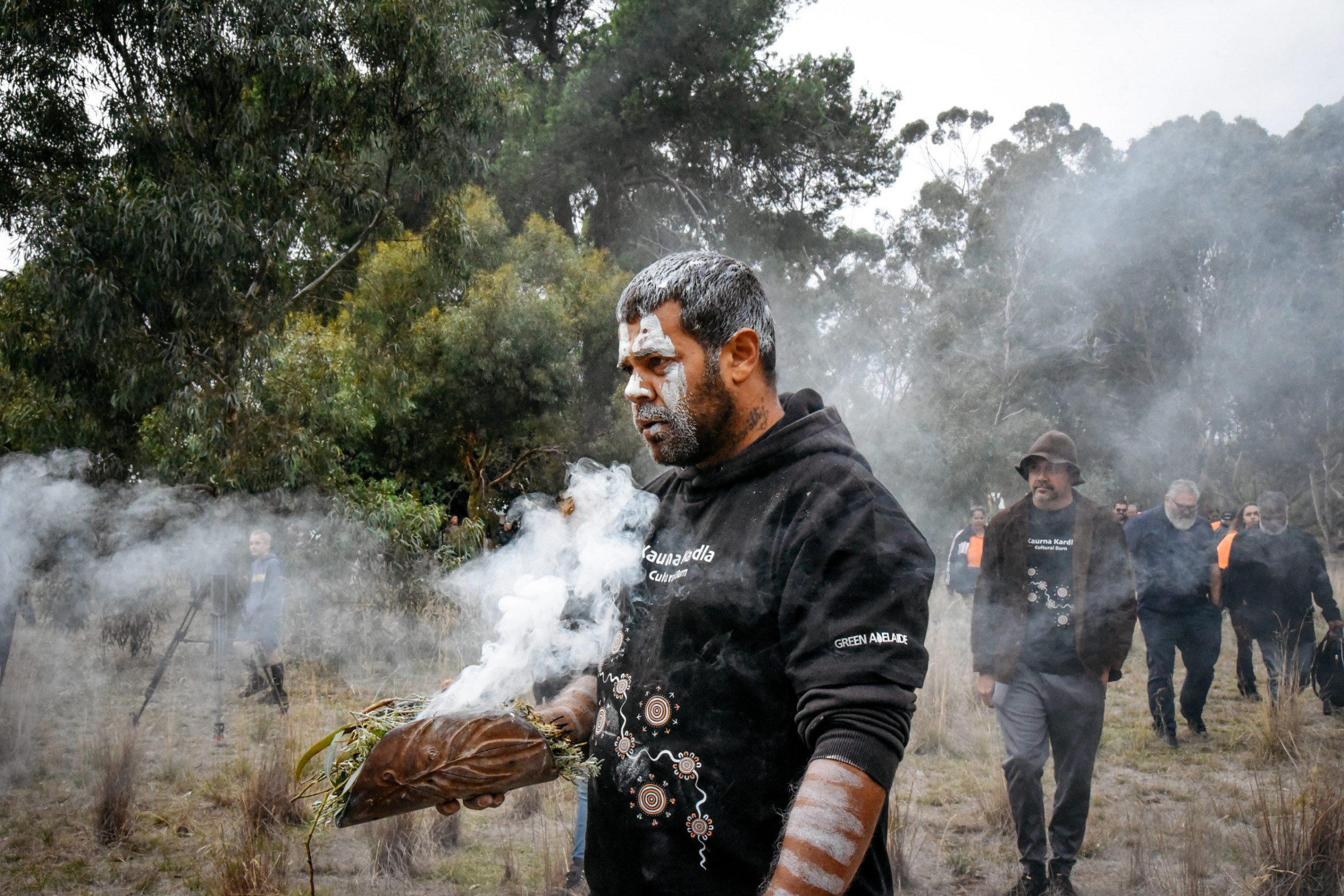 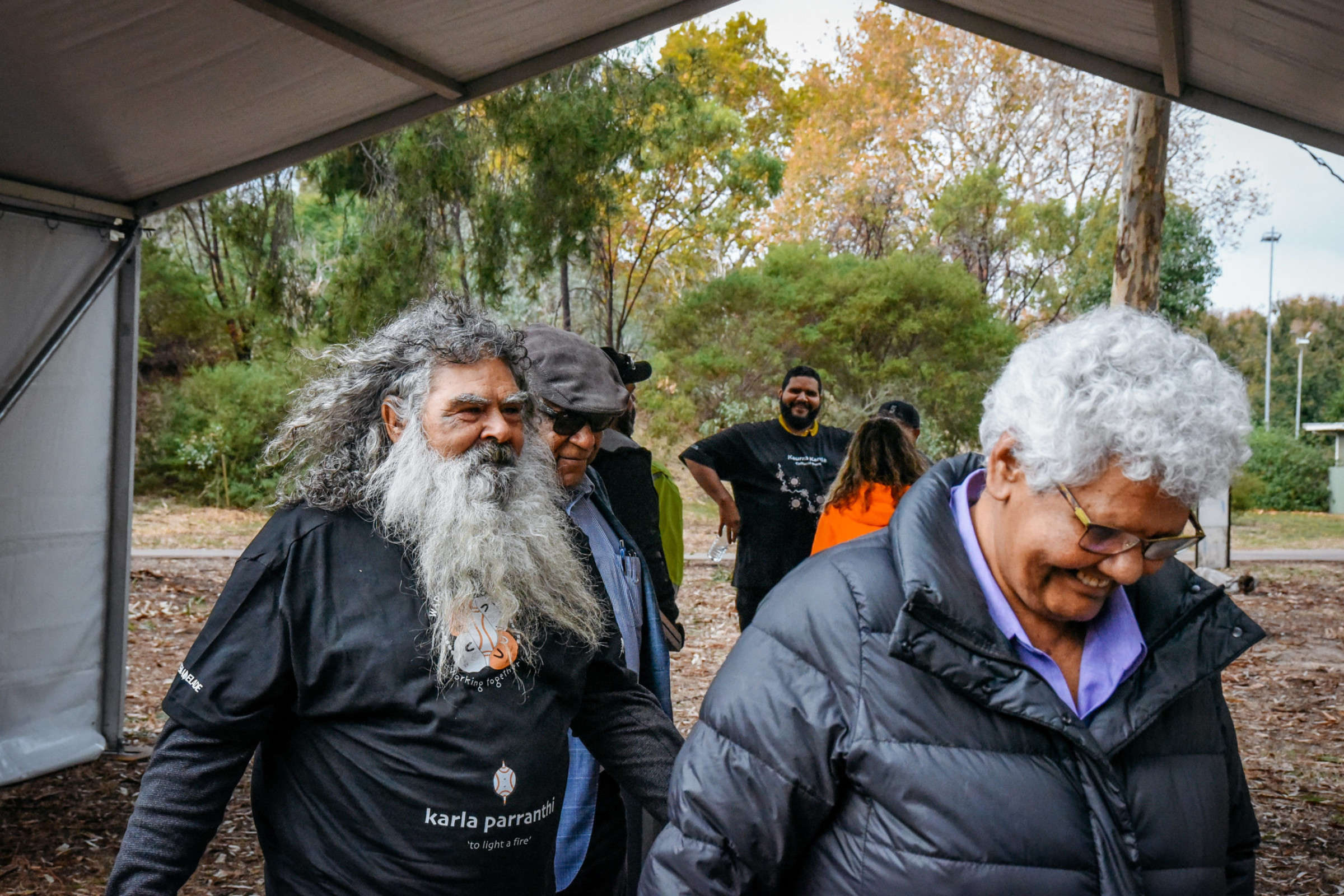 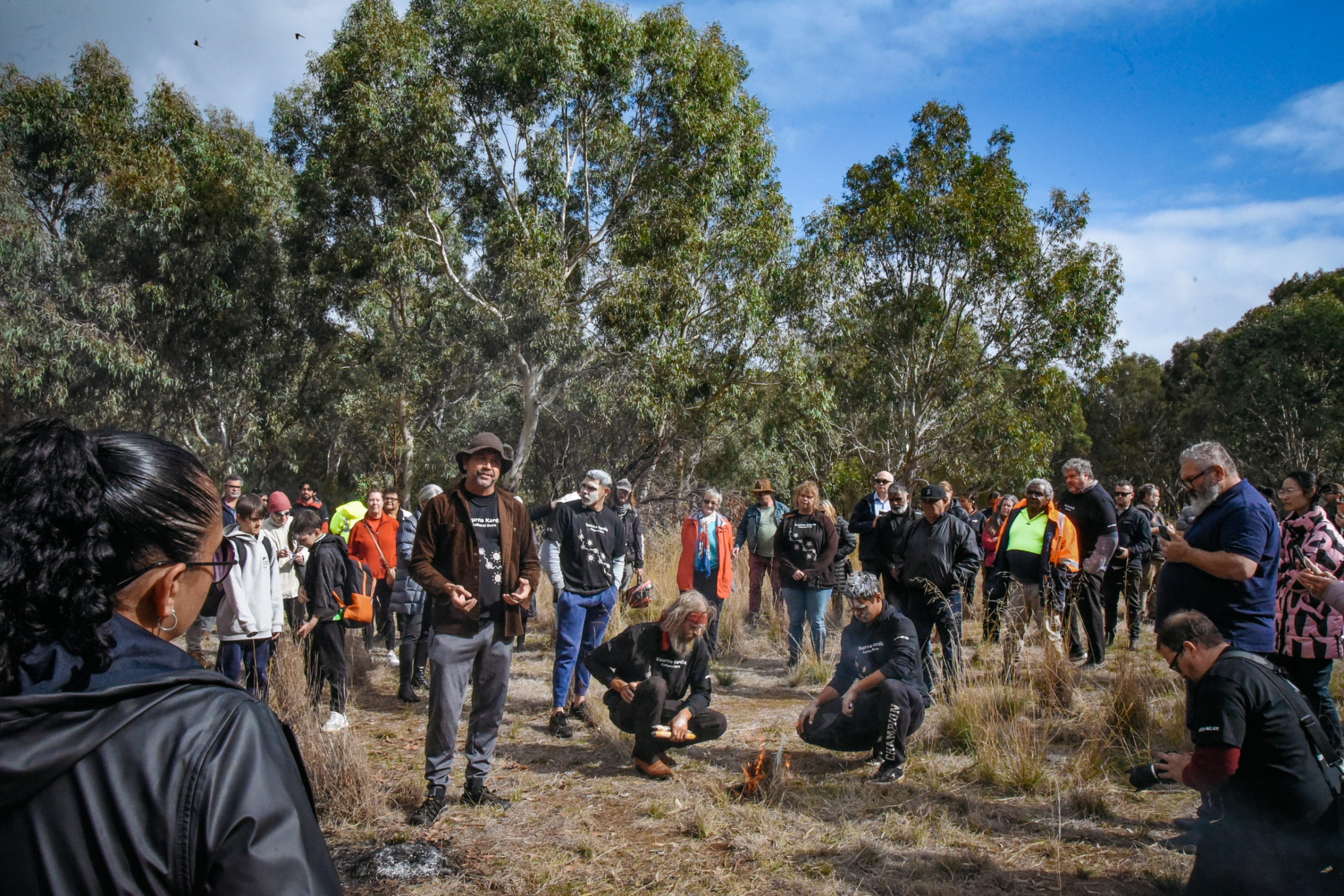 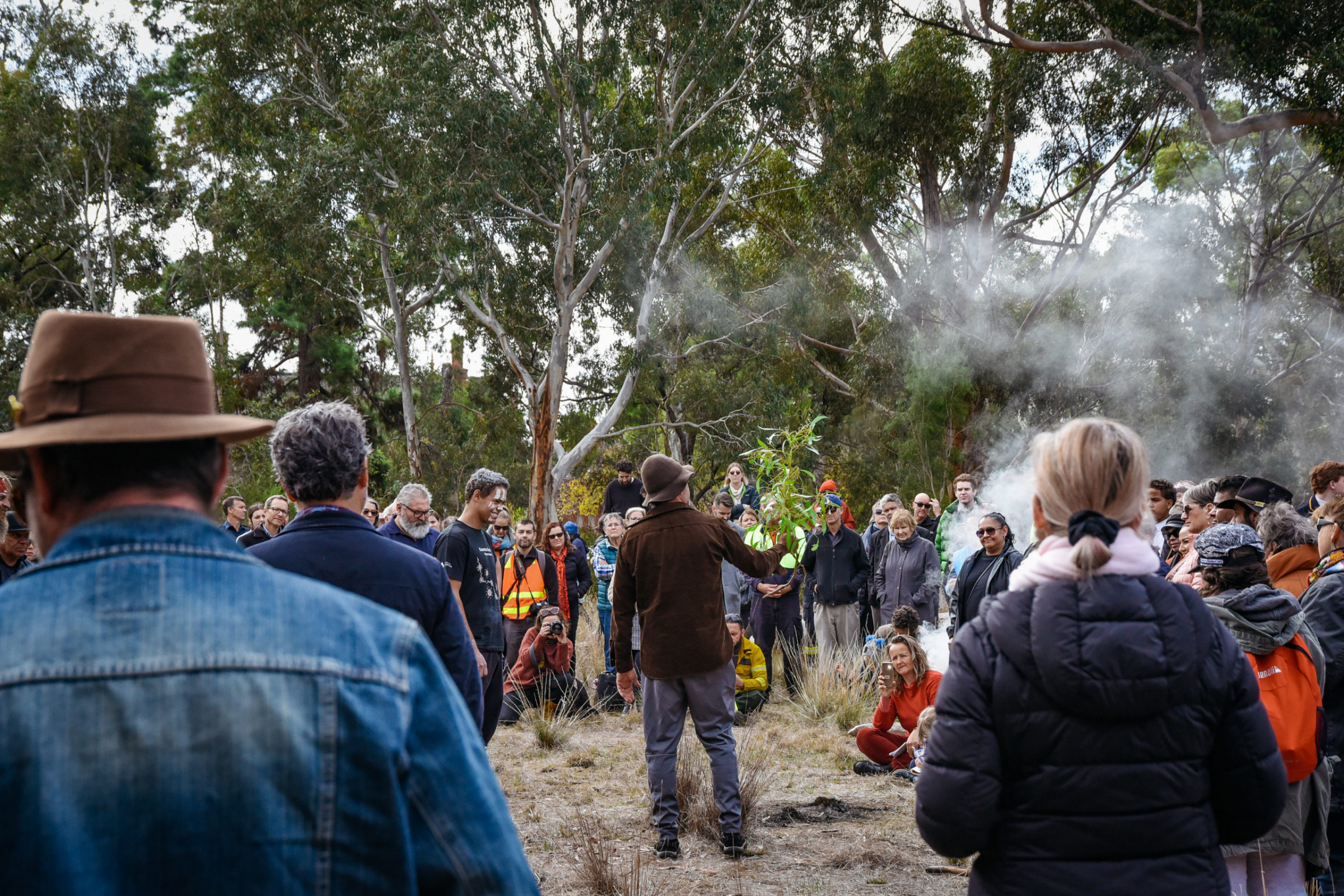 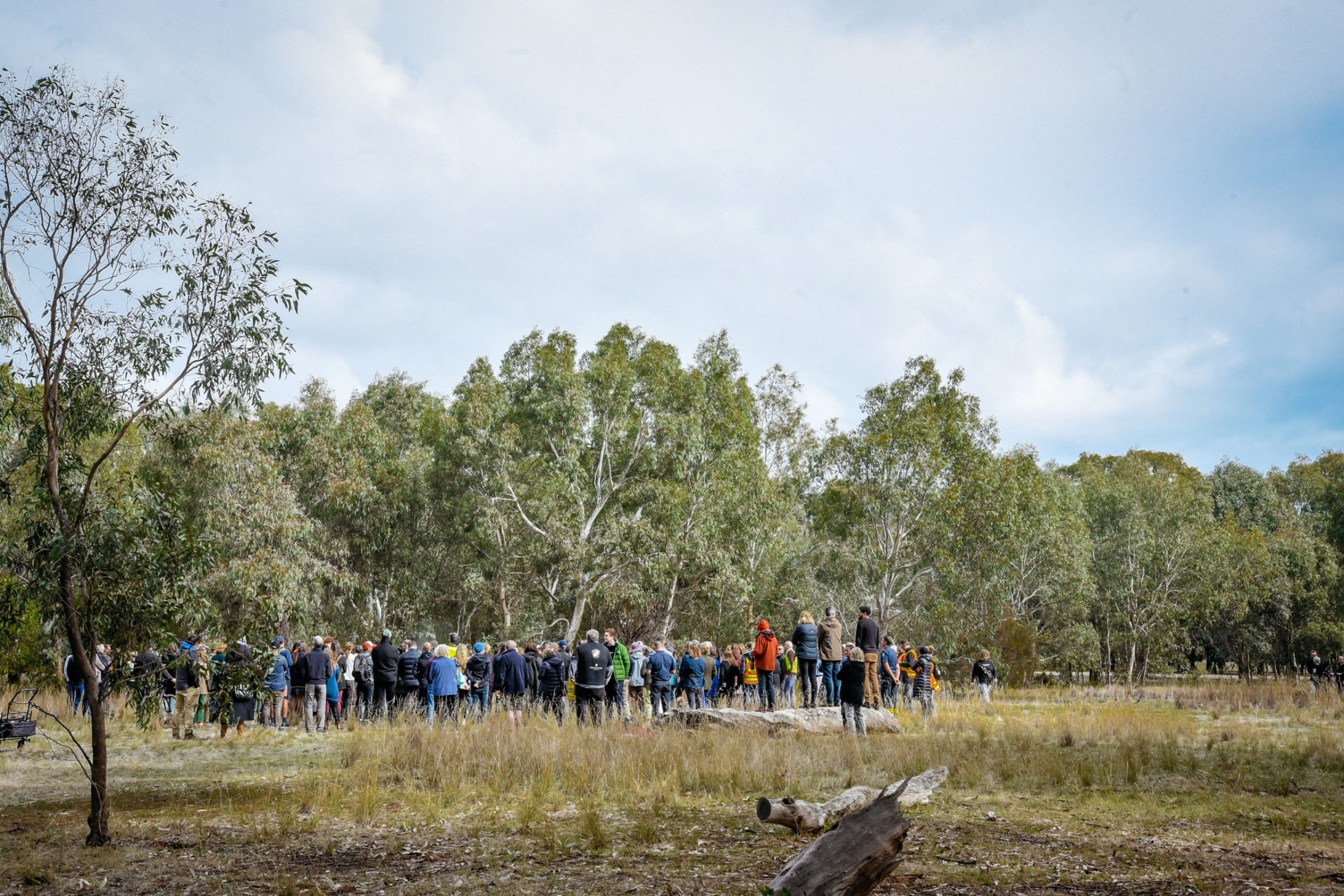 Drew is standing alone in a northern section of Tuthangga (Kaurna for ‘grass place’), his blue lighter in hand.

With ochre painted across his face, Drew explains that three years ago he participated in a different Kaurna ceremony, the repatriation and burial of his ancestors’ remains after decades spent in London’s Natural History Museum.

Through the course of the repatriation, Drew held a box containing the skeleton of a murdered one-year-old.

This had a significant impact on him.

“Seeing those bones made me think about the other ones that would have had the same fate – not just in Kaurna, but across the whole country,” he says.

“There would be hundreds out there, if not thousands, with so many of us spread all over the world. It’s not all roses.

“But that’s part of being an Aboriginal man these days. It’s taking on the post-trauma of our people and trying to make it better.”

Crouching down, Drew collects a fistful of grass.

One way to cope with the immensity of helping his 65,000-year-old continuous culture repair from the devastation of colonialism, he says, is to focus on the “next positive step for Aboriginal people”.

This includes the burn.

He clicks the lighter to life and a fire starts to spread.

“Taking my culture for my own knowledge has really empowered me,” Drew says.