A personal recommendation is the best way to guarantee a good book (or magazine) comes home with you. Here’s what we’re reading, and why we think you should be reading it too. 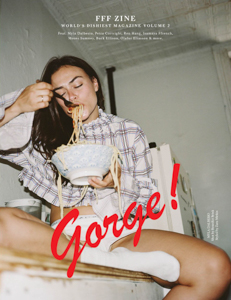 Two things that usually shouldn’t spill onto one another – food and fashion – do so spectacularly and unapologetically in the reasonably new
independent publication, Food For Fashion Zine.

The fashion industry has a history of rejecting food (because bleugh, calories) and keeping the catering table well away from the clothes (don’t dirty the Balenciaga, please). But no longer.

A generational rejection of unhealthy industry standards and the body issues they have created has culminated in a new breed of young creative who envisions a messier, dirtier and far more realistic fashion industry.

FFF Zine, self-described as the “world’s dishiest magazine,” is the brainchild of young Australian duo, Zac Bayly (former editor of Oyster and Fantastic Man) and Stacia Hadiutomo (former Oyster art director, and designer for Josh Goot). Together, they’re moving the industry forward, one bowl of spag bol at a time. 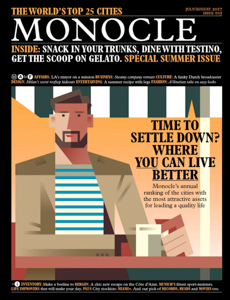 Monocle celebrated a decade in circulation this year with edition 100. Five issues beyond that milestone and creative director, Richard Spencer-Powell, is looking comfortable within the new structure and tweaked aesthetic of one of print’s global success stories.

I was introduced to this global briefing on affairs, business, and design as part of a training day my first publisher organised back in 2008. It changed the way I viewed media and forever set me on a course to improve the quality of Adelaide’s print media.

Monocle continues to be the touchstone for innovation in media with a collection of shopfronts and bureaux across the globe, a 24-hour digital radio station and a healthy bookshelf of special editions. Issue 105 features a Q&A with our own Lord Mayor, Martin Haese, in the Asia Pacific briefing notes.

I recently re-subscribed after letting my subscription lapse, and am heartened by the 200-odd pages that encourage real reading rather than the more idle ‘gazing’ the phone seems to warrant. 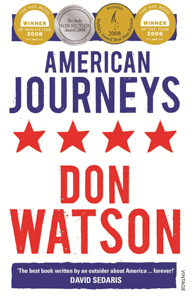 There has never been a more pertinent time to peer into the heart of small town America than in the midst of Donald Trump’s first elected term.

The rural and suburban enclaves of the United States are a mystery to most of the world, which is brought up on images and culture pushed forth from the country’s great and glittering cities.

But out in the sticks is where the majority live, and this book by Don Watson leads us gently toward meeting those masses and occasionally even understanding them. Don is one of Australia’s great writers – a master of the evocative sentence – and he wrote this chronicle while travelling by train through the States well before the Trump saga began. But, such is the power of his insight and his words, Don’s story seems as revealing now as ever before. 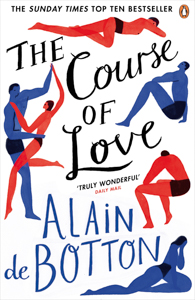 The Course of Love by Alain de Botton

In Alain de Botton’s latest novel The Course of Love, we get to know Rabih and Kristen, and their typical romance. Strangers, they meet through work, quickly become lovers and then marry, publicly committing to spending their lives side by side. Society has them wrapped in a neat little happily-ever-after package. But as you might have guessed, dear reader, society has it all wrong.

As our protagonists’ relationship progresses, each piece of mundane conflict is followed by an explanatory paragraph (conveniently set in italics, thanks Alain), that breaks down the behaviours and their origins. Countless situations that can put stress on relationships are explained, like the end of the honeymoon period, an unreciprocated sexual fantasy, the arrival of children, and the couples therapy that follows these initial challenges.

Although the characters aren’t as heinous, reading the story evoked similar feelings to those I had when watching The Sopranos and House of Cards. Rabih and Kristen aren’t murderous mob-bosses or petulant (and also murderous) presidents, but they are in need of attention, power, kindness and love, and they are ruthless in trying to get these things from each other.

Tales of humans behaving – and treating those closest to them – badly, are interesting. Especially when the context is happy, long term relationships; something that many of us are conditioned by society to strive for.