CityMag editor Farrin Foster feels the power of fear and loathing in a post-election United States. 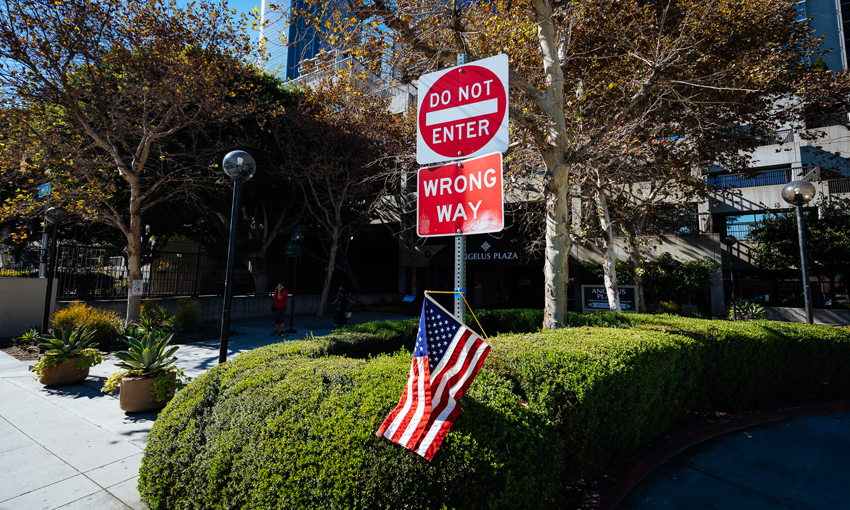 On Tuesday evening, as the USA’s polling booths were closing, I met a real, live Trump supporter for the first time.

He was playing darts at a dive bar in Central LA, half watching as the election results ticked over on the obligatory flat screen TV that comes standard in every American venue.

California was one of the states won by Hillary Clinton in the presidential race, while Texas (where Farrin arrives today) got behind Donald Trump. At current counts, the Republicans will also hold majorities in both the US Senate and House of Representatives.

On a different note, Californians did vote to legalise recreational use of marijuana.

We began our conversation on mutual footing. He told me that this election was like nothing he had ever seen in his fifty-something years, that it was a symbol of something gone very wrong in his country.

But for him, Clinton – as a part of the political class – was the harbinger of his country’s sickness, while I thought the bigoted, populist, anti-intellectual Trump was a much bigger problem.

We argued gently for a while.

He said that he finds it hypocritical when Clinton speaks about the working class. I pointed out that Trump’s life experience is even more removed from that of the everyday American than Clinton’s.

He said that men “just talk that way” about women sometimes, it doesn’t mean they’re rapists. I asked if he would leave a woman he loves alone in a room with Trump, and he said no.

We shook hands, and he went back to the darts.

There’s a wealth of commentary churning out of the media now that Trump has been declared the winner.

There’s articles that show how the win came about demographically (and yes, low voter turnout does seem to be a factor), long lists about the consequences of a Trump White House and examinations of the reality TV star’s cultural appeal.

But what is reflected back in conversation – both with people who voted for Trump and those who didn’t vote at all – is disenfranchisement.

Even in an America where most people are middle class and where achieving a better life through education and hard work remains possible, people are raging against what they’ve got.

There’s no doubt that middle America and the rust belt are suffering, but that suffering doesn’t seem proportionate to the strength of reaction needed to appoint someone like Trump – unqualified, offensive, dangerous – to lead the country. This is not the GFC. It’s not a war zone. It’s a country dealing with the same effects of de-industrialisation and globalisation as Australia.

But, rage and fear run deep here. Instead of being circumstantial, those feelings are an expression of the suspicion that America was promised something and it wasn’t delivered.

And that’s true. In the most ardently capitalist nation on earth anything less than continuous, near-exponential growth seems like failure. People see the fact that their children might have less than them as a personal betrayal perpetrated against them by the establishment.

So they react. They vote for Trump.

The Trump supporter I met in the bar was like a lot of them across the country. He wasn’t a bad person, nor was he stupid. He just felt that he and his country deserved better and he thought maybe someone different – an outsider like Trump – might help.

But what seems likely is that Trump is not different enough. Changing to a new style of leader is not going to change the economic system that has brought unhappiness so deeply into America’s heart. And so, America’s crime in electing Trump is not one of malice, it’s much more like a lack of imagination.