Adelaide is often bemoaned as directionless and lacking identity, but Joost den Hartog says we’re looking at our city’s obsessive taste for self-analysis all wrong. 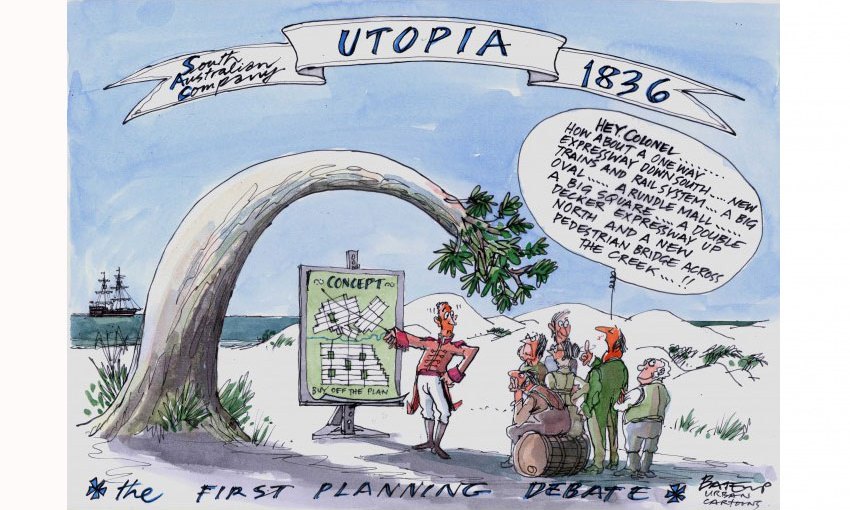 In mid-2006 I moved from Amsterdam to Adelaide. It was apparently winter – but from where I was standing, it was sunny, warm and dry – very dry. When I moved here, Adelaide was in the midst of a ten-year drought. The water situation freaked me out wholeheartedly. I started to doubt my decision to relocate to Adelaide, and fed the dying lawn with the water we salvaged from our short showers.

It took me a while to get over the shock, but when I did, I understood Adelaide and its people. There is no logic­al explanation for why Adelaide exists in the place it exists. Adelaide’s geographical positioning is not because of trade routes, or because it used to be the only place where you could cross the Mighty Torrens: and it isn’t because of fertile land that can produce food for hungry citizens in homelands far from here. It exists because of sheer aspiration. Adelaide exists because of ambition, full speed, out loud dreaming. A stake in the ground.

That is the beauty of Adelaide, it is a concept, not a natural growth… A live experiment that can be corrected, realigned and catapulted.

Our founding mothers and fathers – those who we pay respect to with the rubber of our soles and tyres on the streets that bear their names – decided to load a library instead of another box of seeds and potato plants in their prec­ious cargo spaces when they made their journey here by boat. We still own those books. They are in the State Library; ask library director Alan Smith about them, you’ll be amazed. Books capture ideas, and this city is an idea. This is Utopia.

Sir Thomas More brought us the concept of Utopia in 1516 as being a community with near perfect living cond­itions. We are only two years away from the 500-year anniversary of Utopia, and in these two years, we can fix a few little things and put ourselves in the box seat for taking the top honours when the world assesses Sir T’s legacy.

We can keep this city great as long as we keep dreaming. I have never lived in a city that debates its own existence more intensely and constantly than Adelaide. It might drive you bonkers – and I admit, talkback radio here would have even converted Marshall McLuhan to believe that media should be a one-way street –  but, the discussion is a good thing. We are paying tribute to our founders, we are continuing the Utopian tradition. That is the beauty of Adelaide, it is a concept, not a natural growth: a false economy if you wish. A live experiment that can be corrected, realigned and cata­pulted. It is this concept – resultant of a lack of evidently purposeful positioning – that will prevent Adelaide from ever becoming mediocre. Rest assured, you live in the city of dreams, a city not weighed down by its own history like the cancerous growths of places like London, Paris, Amsterdam, and the ever-struggling Vienna.

Ross Bateup is an architect, holds a Masters Degrees in Urban Design and City Planning and has had his cartoons published internationally and nationally in numerous publications including The New Yorker, New York Times, London Times, The Australian, The Bulletin, The Advertiser and the Sunday Mail.

Don’t cheer too early though, as there is plenty of mediocrity to be found in Adelaide. We are our biggest enemies. We tend to bury our city’s biggest asset – the ability to debate and reinvent itself – with the weight of mediocre exchanges. The debate is often not conducted on a high enough level. We don’t support the dreamers amongst us enough for us to dream collectively.  This is not a stab at leadership, but it is a nudge at our collective responsibility to seize the opportunity originally laid out for us.

The most powerful act of leadership is a willingness to follow. It is up to us. Follow good ideas, take risks and support exciting plans. The opportunity to be a leader lies with everyone in Adelaide. If we do this well enough we not only win the award for most Utopian city in 2016, granted to us by the Sir Thomas More Estate, but our biggest export product will be creative leadership.

Sure, our future is uncertain, but that is great. Where other cities are held back by their history, our history allows us to be enlightened, agile and exciting… in any way we see fit.