There's nothing dogs can't do.

For as long as there has been CityMag, there has been Frederik. He is the smallest individual in our team by stature (as most dachshunds are), but he is inarguably the most important: our Chief Morale Officer.

Without his tireless efforts, laps would go un-warmed, toys thrown but not returned, and every human in the office would be left exposed to the perils of the outside world – Toll delivery drivers, visiting friends, that whippet that walks by every so often – without a proper warning system.

The value of having a dog at work is obvious, and admittedly, as a gaggle of millennials making a magazine in Adelaide’s CBD, you might expect to hear that from us, but the good word is spreading.

“I think people don’t expect to see him in here when they see him on the website. They come in and Hugo runs out, they’re like ‘Oh my God, he’s actually here!’” Serina Pace, founder of Pace Lawyers and mum to Hugo, says.

Hugo came onboard the Pace Lawyers team in 2016 as their “official office health mascot,” and is now an integral part of the firm. “As soon as he was here, it was quite obvious that he wasn’t going anywhere. His name will be on the front door soon,” Serina says.

Law can be a stressful profession, with clients not always seeing eye-to-eye with their attorneys, but Hugo has a neutralising effect.

“They’ll come across Hugo and they’ll start telling us about their dog, so it helps that. And it helps de-stress them too, because building rapport quickly is really quite useful when you’re trying to get to the real issues in a matter. People naturally don’t want to open up, unless they’re forced to, to a lawyer, so anything that aids in that process is super useful.”

“I live in an apartment, [so] I don’t have a pet, but I am a pet person… I like animals and I like dogs,” associate lawyer, Shavin Silva, says, “Do I want to necessarily take care of them? No. This is the best of both worlds.

“I do a lot of litigation as well [and]… there are a lot of pressures on you, so to be able to take five minutes and sort of get away from it all, which is what it is, [is great].”

David Adelson, a professor of bioinformatics and computational genetics at the University of Adelaide, has seen similar benefits with his officemate, Rory. 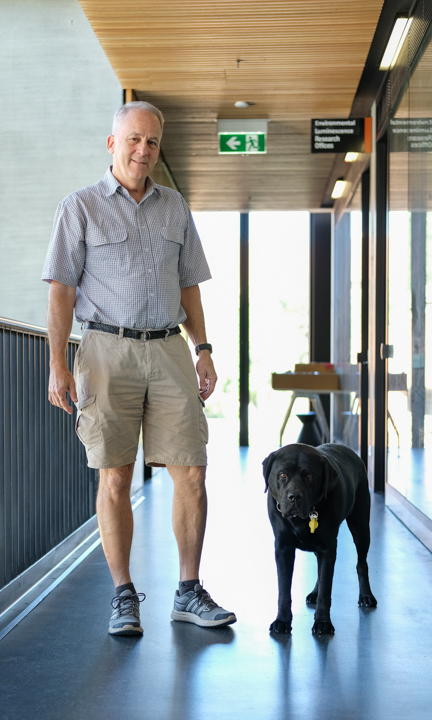 Rory is a former Guide Dog stud, and as such has a very mild temperament, but there is undeniable excitement in the waggle of his tail as he approaches the glass door that CityMag waits behind.

David unlocks the door and Rory quickly shoots by us, headed for the office of a close friend of his who he had not seen earlier that morning. She has Schmackos in her top drawer.

“Velta [Vingelis, associate lecturer, genetics and evolution at University of Adelaide] loves animals, she’s got horses and dogs and other things, so she’s always bringing snacks in for him,” David explains.

As we tour through David’s lab, Rory excitedly sniffs through the office bins at each workstation – another daily tail waggle-inducing activity.

Rory comes from an accomplished family of working dogs, his sister, Ruby, was retired from the Guide Dogs but went on to become the first Operation K9 recruit, a partnership between The Royal Society for the Blind and the RSL, which partnered assistance dogs with returned soldiers suffering from PTSD.

Aside from bringing cheer to level 2 of the Braggs Building, Rory has had a positive effect on David’s working life.

“It used to be that I would try to park as close as possible, come in and sit down and never get up until it was time to go home. I know that when I first got one of these [fitness tracker], I would be lucky if I cracked 5,000 steps, a typical sedentary office worker,” David says.

“As soon as you start taking a dog to work, he needs to be walked in the morning, the simplest way to do that is to park a bit further away and walk him in… At lunchtime he needs to go out and have a walk and be toileted. I go for a walk down by the river, so there’s another half hour walk, so I’ll walk 20 minutes in the morning, half an hour at lunchtime, walk back to the car in the afternoon, another 20 minutes.

“Before you know it, you’ve racked up more than an hour of walking, right? So I never get below 10,000 steps ever.

“[And] the office would be a lonely place. There are times in the day, because a lot of what I do is very solitary, it’s computational, if I’m not directly engaged and meeting with a student to discuss their research, I’m usually doing something on my own. And sitting locked in an office on your own, sooner or later you’re going to look up and go ‘Hmm.’ But I never have that problem, because I can always just turn around if I need a break and just go ‘Hey Rory!’ and then back to work.”

Rory communicates to David that he would like the journalist to leave.

Around 63 per cent of Australian households has a pet, and it’s only natural that, as working arrangements become less formal, those relationships start to make their way into the office.

It should, of course, always be approached with caution, as not all workplaces are naturally inclined towards pets (nor are all people, weirdly), and even those that are, can show interesting dynamics.

“There’s concerns around, say for example, the nursing home dogs that get overfed,” Janette Young, lecturer in health promotion and health policy at the University of South Australia, says. “Residents can actually fight about them, ownership kind of stuff.”

But there are great benefits to having a dog in your life – be that at work or in general – and the more they become accepted in the public realm, such as offices, hopefully the more that the stigma attached to pet ownership will recede from rental contracts, public transport, and maybe even cafés – worldviews that can have negative effects.

“If you’re on a low income, you don’t have a car to get you and the dog in a car down to the beach, for example. You can’t take the dog on public transport – that’s restraining both you and the dog,” Janette says.

“In terms of health, which is my space, what do you do with the dog when you’ve got a healthcare appointment if you’re homeless? If we take some of these relationships legitimately, see them as legitimate and important, hopefully we’ll start to facilitate them better.

“There’s still a little bit in academia around proving that pets are useful/not useful, but actually, people just have them anyway, and take them into the office anyway. So whether it’s useful or not useful, somehow it’s working for people, isn’t it?

“Even people that don’t have pets find that it facilitates communication with other people, and they even feel safer in places where there’s pets and other people walking dogs around.”

So hats off to Frederik, Hugo, Rory, and all the other office dogs of the city.