The first solo show in a decade from mural maverick Dave Court sees the artist bring technology into his practice, exploring the creative applications of 3D scans, simulations and non-fungible tokens.

This includes such developments as non-fungible tokens, or NFTs, which, as Dave explains, are “this hype thing at the moment.”

According to the BBC (and as you may already have read in a dozen or so similar explainer articles), the technology is a ‘one-of-a-kind’ asset, a digital token that acts as a certificate of ownership, including for digital, immaterial art.

“It basically gives you a certificate that you are the owner of this jpeg,” Dave explains.

“It’s authenticated ownership of digital objects through a blockchain.”

We’ve asked Dave for the details on NFTs not because the concept has garnered a lot of media attention recently, but because Dave’s upcoming exhibition, House Party, will make use of the technology.

House Party is showing at Praxis Artspace in Bowden from 24 June to 23 July and is a body of work Dave has been chipping away at for over a year. The work has sprung from an Ironbank house the artist painted over the course of a month, last November.

The house was eventually razed, but Dave has salvaged a couple of artefacts for the exhibition, such as the “wonky Venus” statue, and piles of bricks and colourful couches and chairs, which now live in his studio.

But the house will still live on for the exhibition, in zeros and ones. 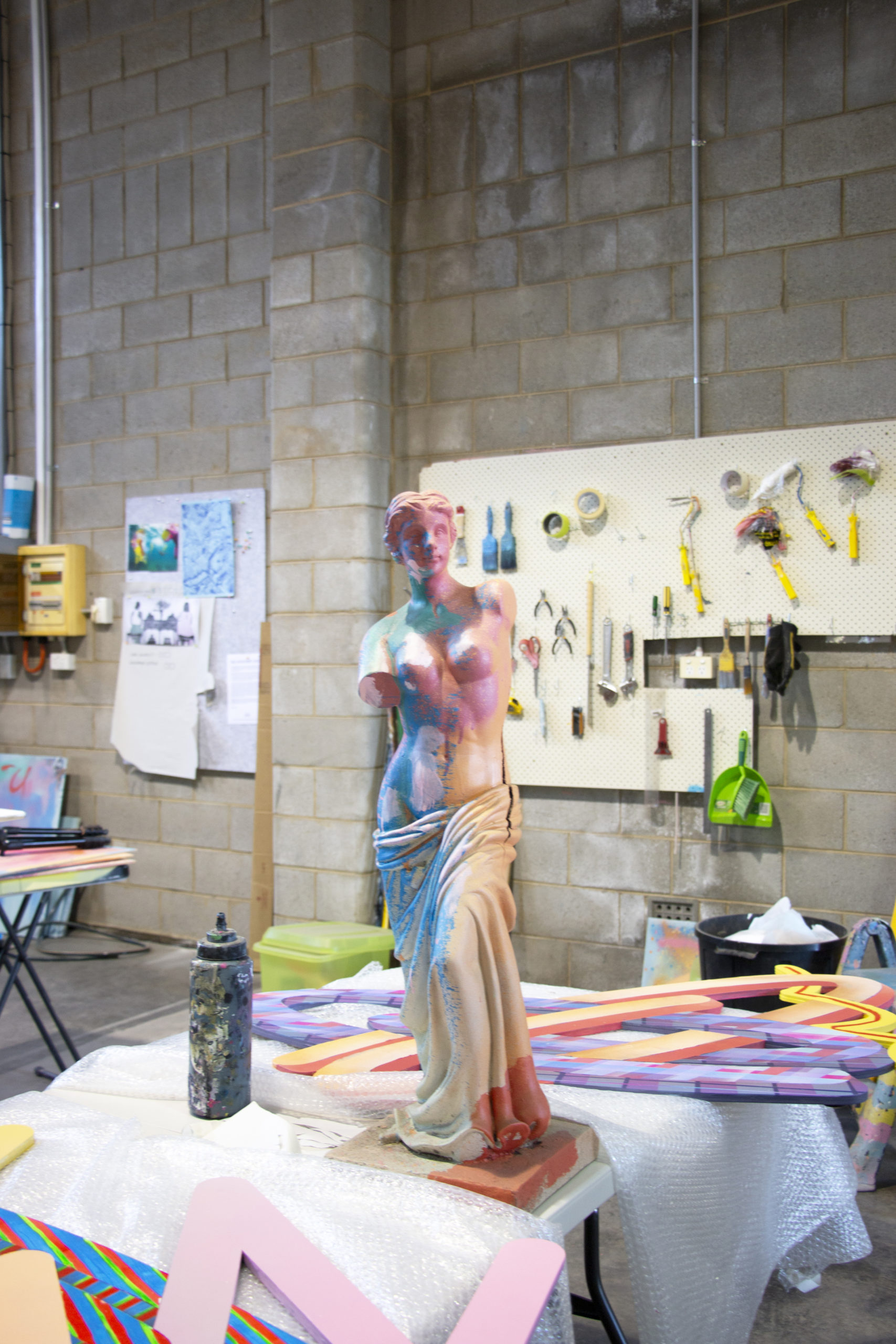 Before it was destroyed, Dave photographed and scanned the property with LIDAR technology.

“It’s a way to capture this physical space and architecture in a digital realm,” Dave says.

“To be able to play around with it and use it for different purposes… it’s fun.”

This allowed him to explore new mechanisms within his art.

Virtual reality will be part of House Party, as will digital sculptures and soundscapes.

I’ve always wanted to push what I’m capable of, and what a medium is capable of to the limit.
—Dave Court 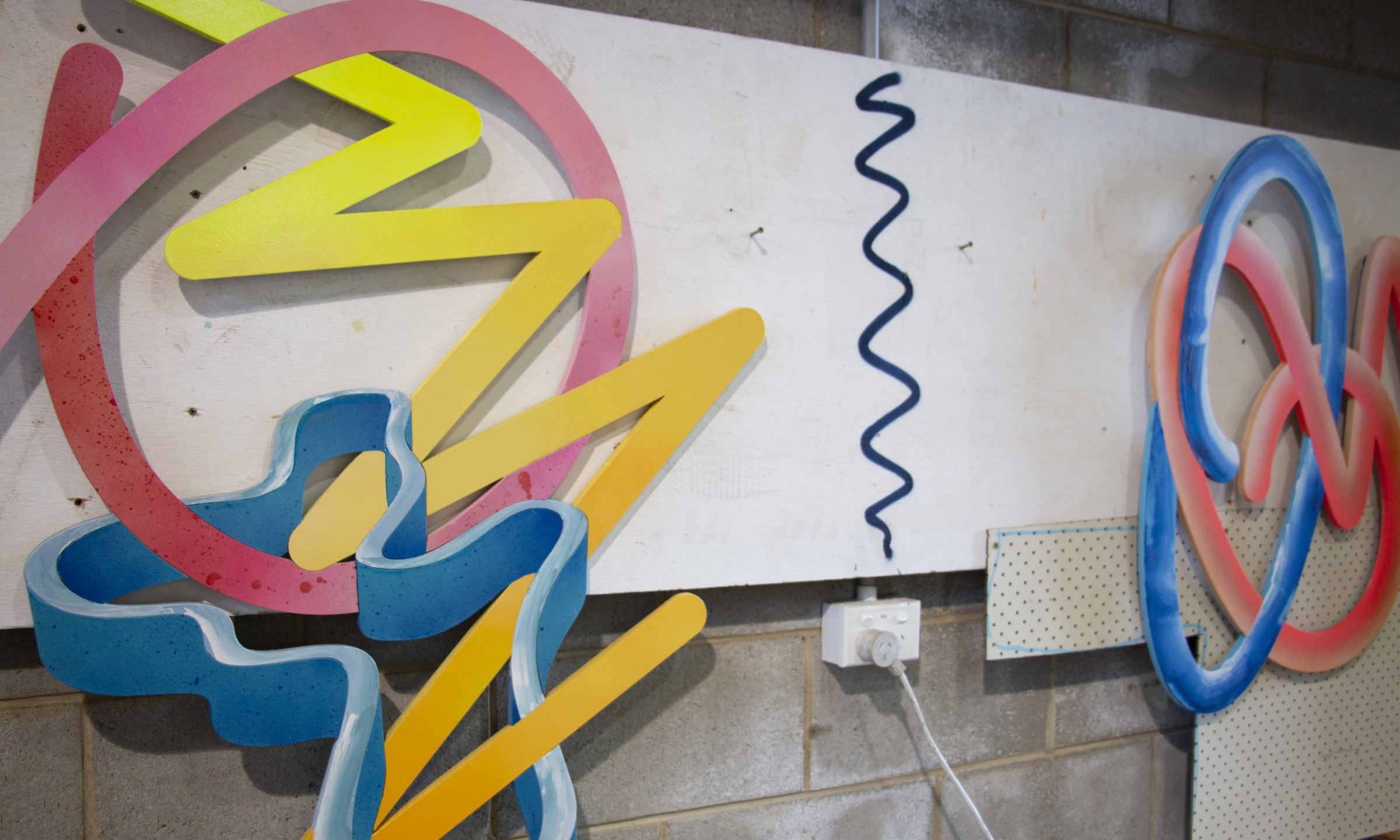 Artworks such as these include NFT chips

To incorporate NFTs into the exhibition, Dave has inserted special chips into each of the artworks on display so that people can wave their phones over the art and be linked to web pages where they can purchase a token.

This is a concept relevant to contemporary discussions in the art world, as well as being in conversation with the arts industry of the future.

But to create this work, Dave has also reflected on the past, particularly on the evolution of his practice.

Over the last decade, he says his work has become more abstract and pared back.

He’s thinking more about “automation, surveillance and capitalism”, which are themes he’s trying to fuse into his work.

Dave is known for painting large murals in public spaces, and says German artist Katherina Gross and Australian artist Ian Strange inspired him to move beyond two dimensions and blast the Ironbank house with spray paint.

It’s not a permanent shift away from conventional murals (“Walls are pretty good,” he says), but Dave has a constant desire to do more and keep exploring.

“I’ve always wanted to push what I’m capable of, and what a medium is capable of, to the limit,” he says.

“It’s been about trying to paint the biggest thing – paint bigger and bigger or more complex.”

A digital artwork within a physical space