In their respective Tarnanthi 2021 works, artists Maree Clarke and Angelina Karadada Boona build upon artistry that dates back millennia. 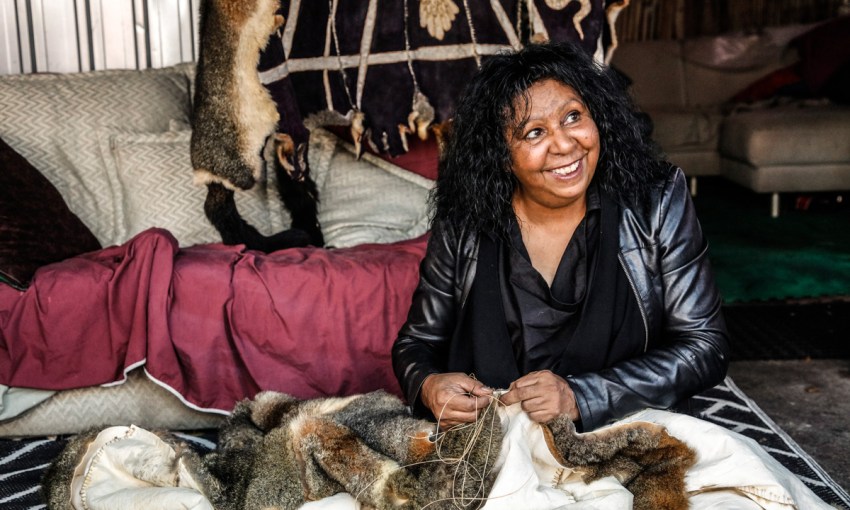 Maree Clarke cracks the jaws of long-dead kangaroo skulls under her boot to extract something very valuable for her art.

She glues the two bottom incisor teeth onto long pieces of leather or sinew, transforming roadkill into regal necklaces.

“I have specific Eskies for the roadkill so the smell doesn’t leach out into the car,” says Maree, a Mutti Mutti/Yorta Yorta and Boon Wurrung/Wemba Wemba woman and multi-disciplinary artist, from her home in Naarm, Melbourne.

“It’s not for the faint-of-heart.”

For the last 30 years, Maree has woven natural materials and cultural understanding into her practice. She is one of the 1000 artists exhibiting as part of the 2021 Tarnanthi Festival of Contemporary Aboriginal and Torres Strait Islander Art, showing at the Art Gallery of South Australia from 15 October.

A series of Maree’s photographic work, loaded with symbolism and ciphers, titled Remember Me, will be on display at the festival.

Maree says the series explores themes of mourning and memories, while offering audiences the chance to experience “over 60,000 years of making”.

One portrait depicts Maree’s nephew wearing a necklace made with 27 kangaroo teeth, the incisors collected during a pre-lockdown road trip.

The object, she says, bestows power to the person who wears it.

“Kangaroos only have the two bottom incisor teeth,” Maree explains, “and if you times that by 27 or 75 teeth, which are my biggest necklaces, that’s an awful lot of kangaroos – and no tribe’s going to be eating that many.”

The second photograph is of another of Maree’s nephews wearing a 10-metre river reed necklace, with ribbons gathered from the Maribyrnong River, running through Melbourne.

The final photograph is a lenticular work of Maree’s niece wearing a black tulle dress dotted with yellow wattle flowers. As the viewer moves past the image, the young subject transforms into an older ancestor. 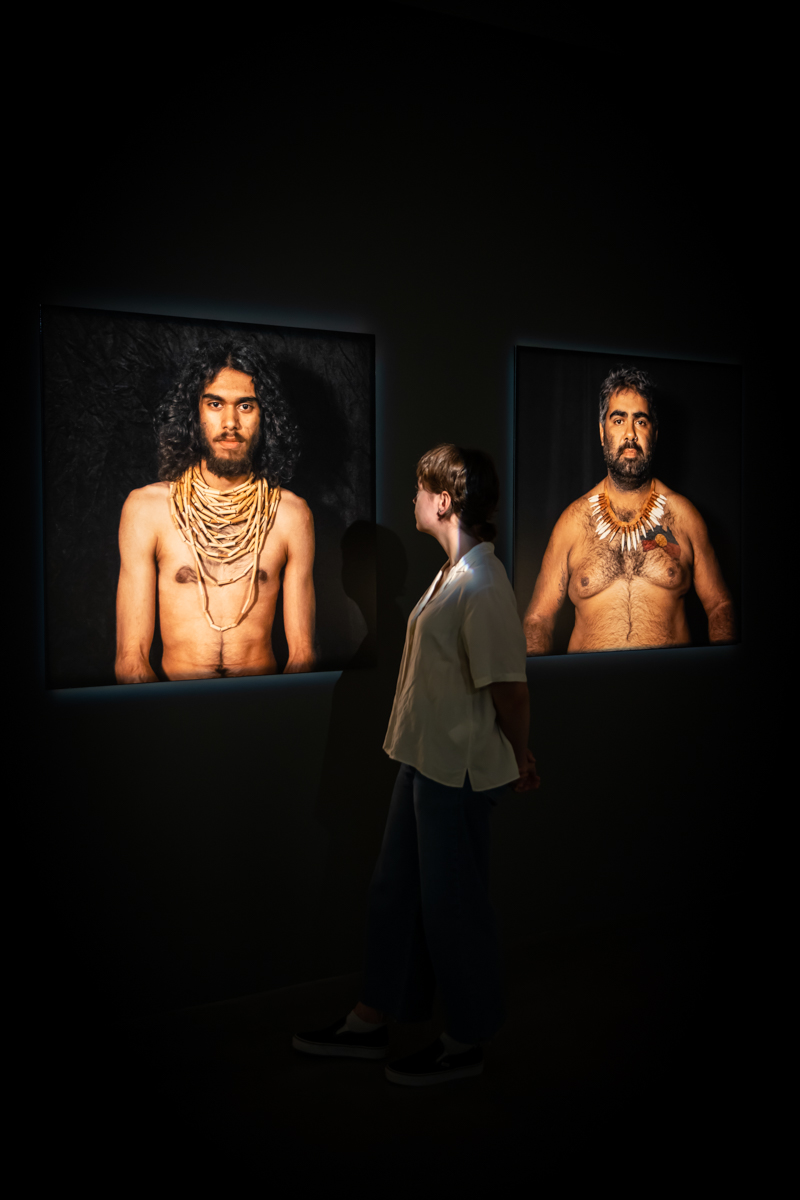 Maree’s work installed at the Musem of Contemporary Art in Sydney for The National 2021: New Australian Art. This picture: Anna Kučera

The 2021 Tarnanthi Art Fair is happening solely online this year, with 100 per cent of sales going directly to artists.
Find more information here.

Remember Me was conceptualised as a much larger body of work, with Maree aiming to photograph all of the younger descendants of the Clarke clan. Due to the ongoing COVID-19 lockdowns in Victoria, she was only able to photograph family members within her five-kilometre radius.

Maree’s “little house of excess” is filled with photographs, set designs for other works, and materials – such as possum pelts – which allow her to continue making while subject to restrictions.

If she doesn’t have a material, she will improvise.

“Two streets over there’s a whole street of carob trees,” Maree says, “and because I didn’t have any black wattle seeds, I’ve been dying carob seeds until they’re black.”

Maree also works with glass. She initially used the material for her 2019 exhibition Ancestral Memory, after commissioning Canberra Glassworks to fabricate a three-metre glass eel trap.

“My nephew and I flew up to Canberra with all of these organic materials and asked if they could make them in glass, which is where the glass kangaroo tooth necklace came from, and the glass river weeds and the glass seedpods core,” she says. “They’re just so beautiful to work with.”

She has returned to glass for Remember Me, this time as casing for pieces of natural ephemera. 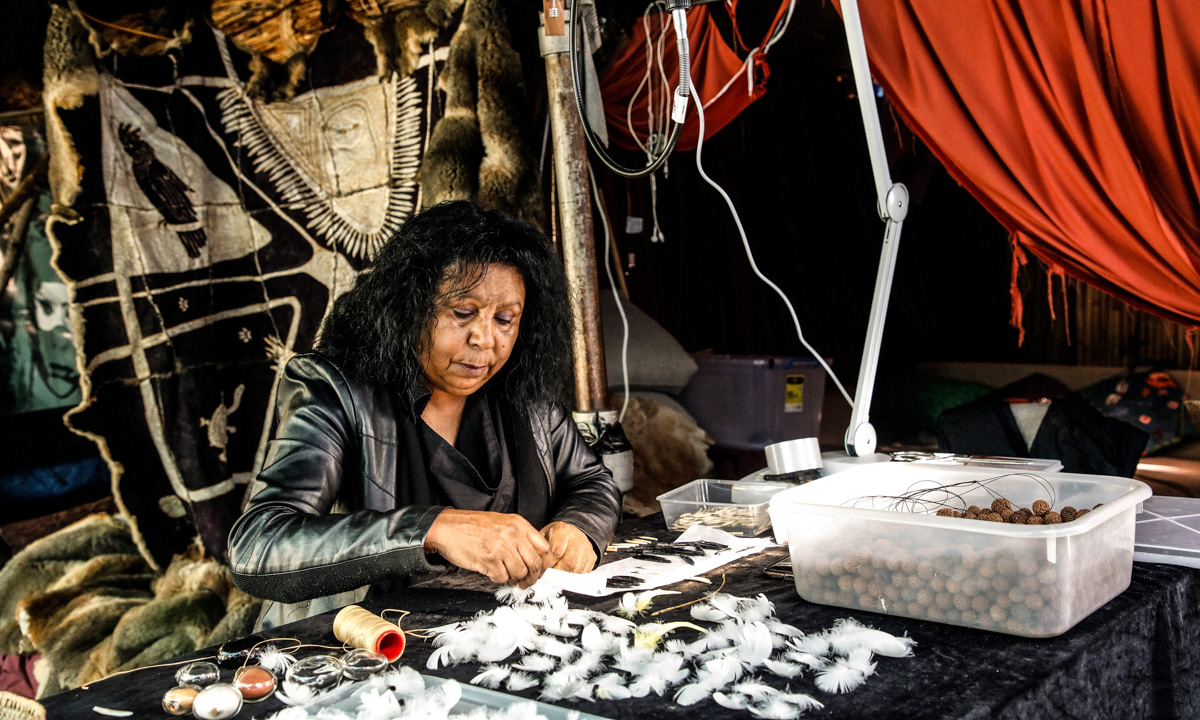 In 1987, Maree left her decade-long career as an Aboriginal educator to pursue a life in the arts. This began as the opening of an Aboriginal art and craft shop in Mildura and blossomed quickly into making.

This wasn’t always a comfortable transition; the first pair of earrings she made to be displayed in the shop took 15 attempts before she was satisfied to put them on show.

Maree has never looked back though, and the breadth of experience and exposure she has achieved is remarkable.

“I went from painting with the smallest brush… to then painting the first green and gold tram to hit the tracks of Melbourne in 1988, and then painting those big 12-metre billboards and doing public artworks,” Maree says.

“I’ve been working as an artist ever since, and I think that’s pretty incredible.”

What keeps Maree interested more than 30 years later is her own personal development through exploring new mediums, and the feeling of inviting people into her world.

Rather than just strolling through an exhibition space, Maree hopes viewers, “feel the energy of artworks” forged from thousands of years of cultural knowledge.

Find Maree Clarke’s Remember Me installation in Gallery 10 on the ground level of the Art Gallery of South Australia. 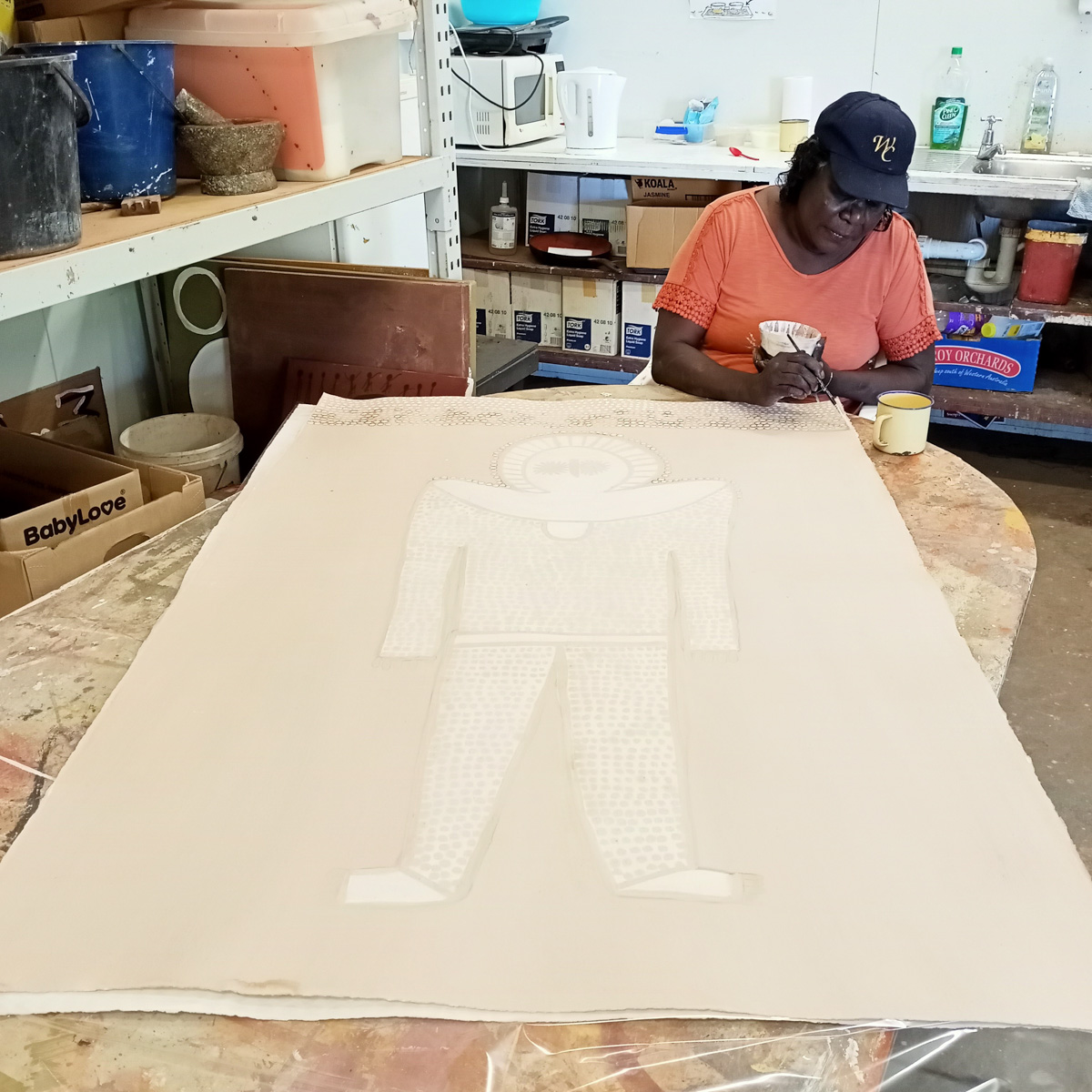 Angelina would travel to the bush and watch her mother collect ochre pigments from the beach and large bark roots from boab trees for dye and string.

“I used to look at her collecting material when I was very small,” Angelina says, who speaks with us from Waringarri Aboriginal Arts, in the Kimberley town of Kununurra in northern Western Australia.

“She inspired me with her knowledge, and she made me paint Wandjina. I don’t paint other things.”

Angelina has been painting Wandjina at the Kalumburu-based centre Kira Kiro Arts for decades.

She says she paints the spirits to “carry on the traditions of my ancestors, my grandmothers”.

She is exhibiting a new range of work, titled Wandjina Emerging, as part of Tarnanthi Festival.

For the artwork, Angelina collects white ochre from beach cliff faces and other tones from the riverbeds, before mixing them with boiled “bush glue”, extracted from red wood and gum trees. Angelina then paints the Wandjina totems on cotton paper. 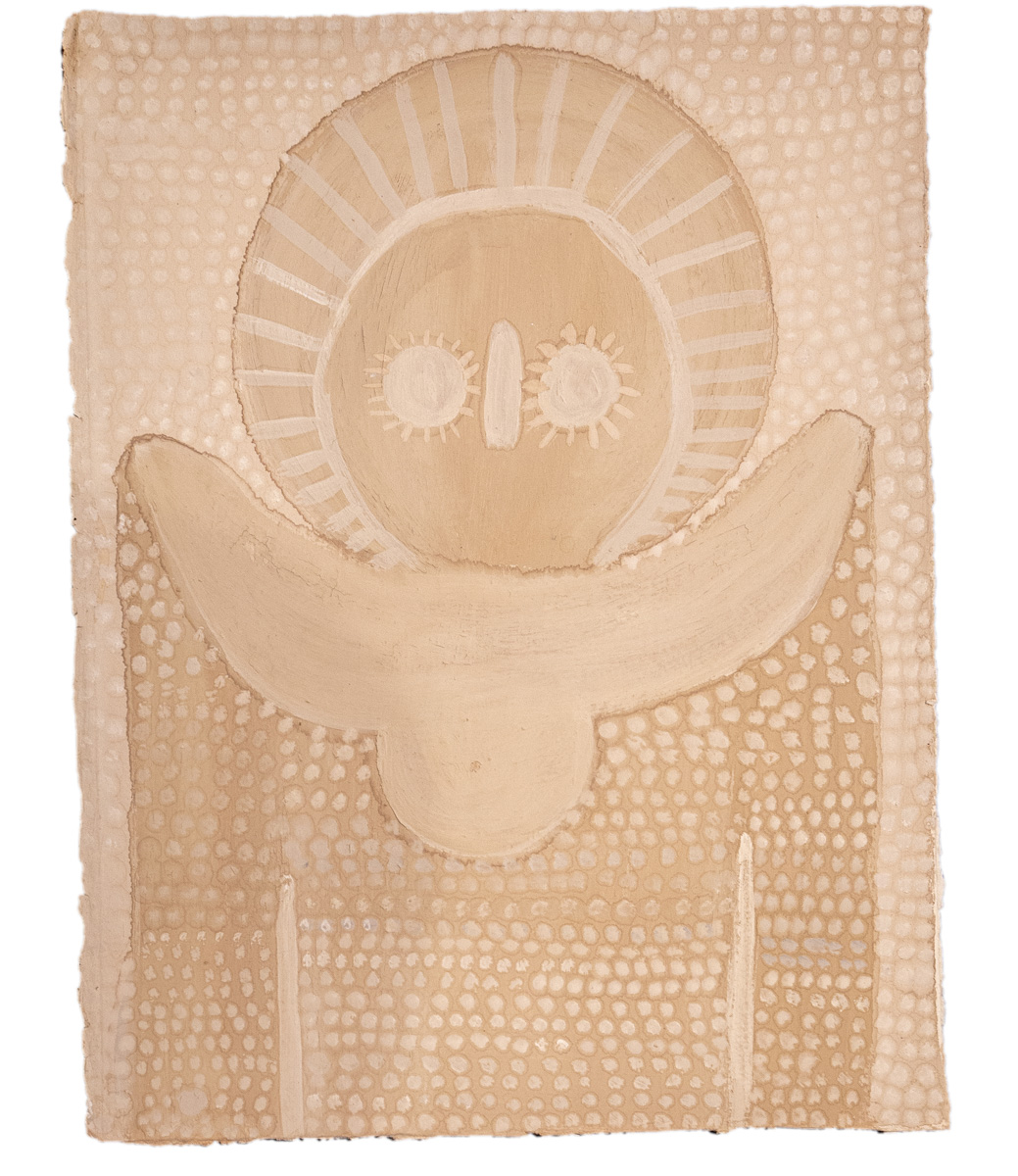 Angelina is excited to gather with her fellow Tarnanthi artists for this year’s festival launch.

“There will be a lot artists there,” she says. “I’m looking forward to seeing some of the artworks I’ve been before, and new ones. In the Adelaide area, I’ve met a lot of artists from around that area.”