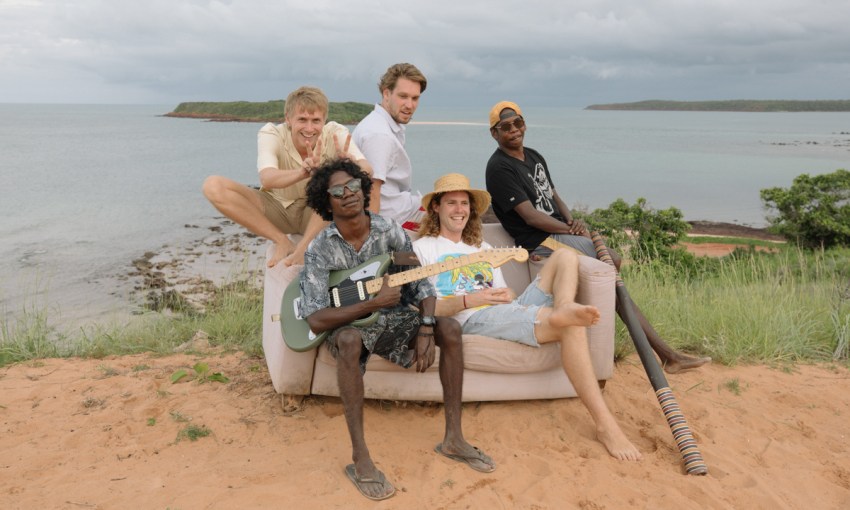 Hearing King Stingray’s music for the first time is like being dunked in the ocean.

You’re submerged in the swell of harmonics created by contemporary instruments, such as Roy Kellaway’s salty surf-rock guitar, melded with millennia-old songlines and instruments. Keeping you tethered is the voice of Yirrŋa Yunupiŋu, who slips between English and Yolŋu Matha languages.

“We have a lot of stories to share,” guitarist Roy tells CityMag over the phone from his home in Yirrkala, in the Northern Territory’s north-east Arnhem Land.

“Growing up in such a place with so many amazing experiences, we’re very stoked by our environment and the things around us.”

On the Friday morning CityMag calls, Roy tells us he won’t be out surfing today. He’s currently hanging out washing and will see his sister and niece later. Despite the hype coalescing around King Stingray, he’s maintaining a pretty humble lifestyle.

“We’re not full rockstars yet,” he jokes.

King Stingray broke onto the scene in August 2020 with their psych-infused single ‘Hey Wanhaka’. Through humming yidakis (didgeridoos), percussive bilma beats (clapsticks) and fuzzy electric guitars, the sound and sensibility of this remote pocket of Northern Australia (which, in 2011, recorded a population of 843 people) can be felt.

Since their debut, the six-piece have released two additional singles, the sentimental ‘Get Me Out’ and rollicking funk-infused ‘Milkumana’, which also weave western musical phrases with traditional Yolŋu ideas and instruments.

Despite their tiny back-catalogue, King Stingray have also been nominated for a swag of awards, and even garnered #46 and #56 spots in the 2021 Triple J Hottest 100 countdown.

At its most purest level, it’s a story of friendship and family – and that’s this band.
—Roy Kellaway

“Yirrŋa sings traditional manikay, which are thousands-year-old songlines, and with this he has the power given to him through the bilma, which are the clapsticks,” Roy explains.

“Through traditional dance, through the bilma and through the didge (the yidaki), [that’s] the traditional elements of the band. And then we’ve got a classic sort of rock setup, where we’ve got guitars and big tones and big drums and big bass.”

Making political music is in the band’s blood. Roy is the son of Yothu Yindi bass player Stuart Kellaway and he is named after Roy Marika, a highly regarded leader of the Rirratingu people living in north-east Arnhem Land.

Marika was involved in the 1971 Nabalco land rights case, which played an important role in bolstering Aboriginal people’s Native Title claims in Australia.

“So much leadership has come out of this community, of Yirrkala,” Roy says.

Singer Yirrŋa is also connected to Yothu Yindi, as the nephew of that band’s late lead singer, Dr M Yunupiŋu. The ‘80s political pop group was most famous for their enduring single ‘Treaty’.

The Yothu Yindi descendants grew up on the same street as their bandmate Dimathaya Burarrwanga, who sings backing vocals and plays the rhythm guitar and yidaki for the band.

Roy says making music with a similar ethos to his and Yirrŋa’s forebears wasn’t a choice, it feels fundamental.

“At its most purest level, it’s a story of friendship and family – and that’s this band,” Roy says of King Stingray.

“Dr M Yunupiŋu from Yothu Yindi would always talk about balancing two worlds, and that’s Yolŋu law and Western law, in terms of the ideology. I suppose for us, it’s important to celebrate Yolŋu culture and we’re doing it through our own contemporary lens.” 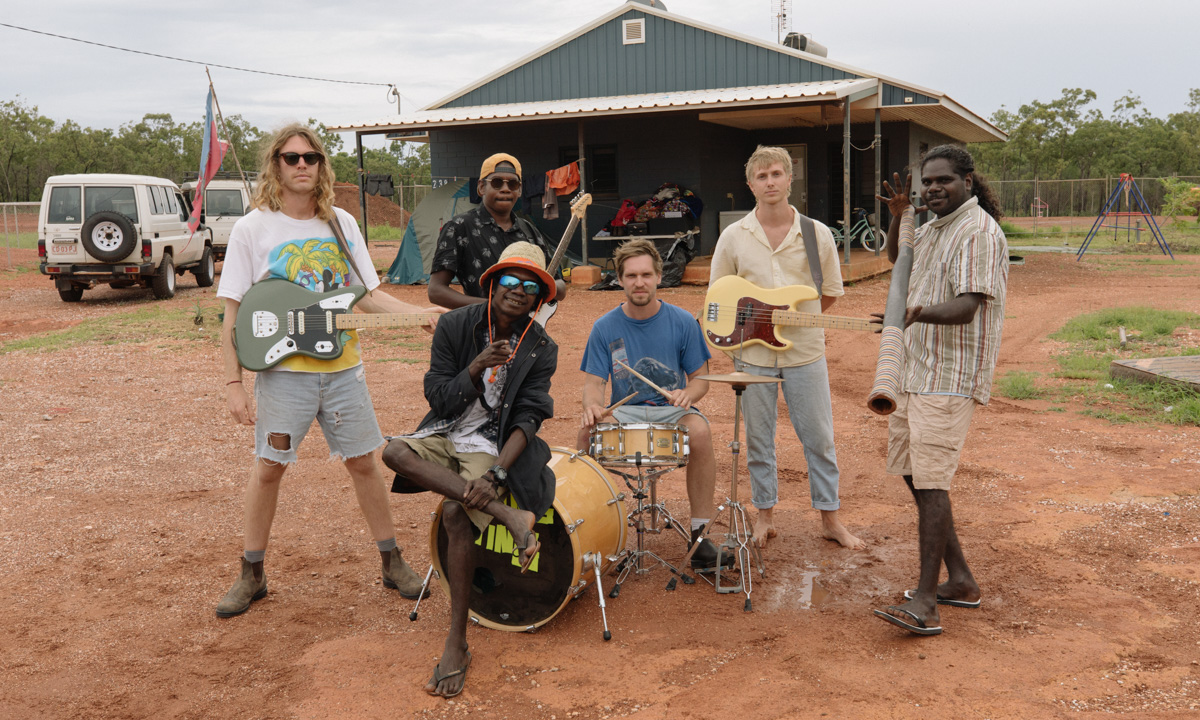 They’re also creating space for Yolŋu men and women to practice culture in a contemporary way – one that’s now being filmed and uploaded to Instagram, and collated into annual best-of music lists.

They’re also enlisting the help of linguists to help transcribe Yolŋu lyrics, which is not something that’s been done in a mainstream way for the oral language.

“We’re definitely not pioneers of it and there’s been so many amazing people before us, too, who have had a voice and are huge advocates for things that people are passionate about, whether it’s culture, whether it’s political injustice, or whether it’s social injustice,” Roy says.

“Just for us, I think having a stage, having [the] space to share story through language and through English, and to put it in a way that people can enjoy and dance to is an extra bonus.

“Language is so important to the culture, and I suppose having languages makes your culture.”

King Stingray will perform at three-day world music festival WOMADelaide this March as part of a national tour.

When asked what people can expect from King Stingray’s WOMAD set, Roy pauses.

“Expect to feel the power and feel the energy that’s edgy, raw and pretty wild,” he says. “And also, I suppose, moving at the same time.”