Makeda Duong and the warp and weft of identity

Artist and Nexus Arts Gallery SALA resident Makeda Duong explains how living with a dual heritage can often leave her feeling “split”, and how producing art makes her whole. 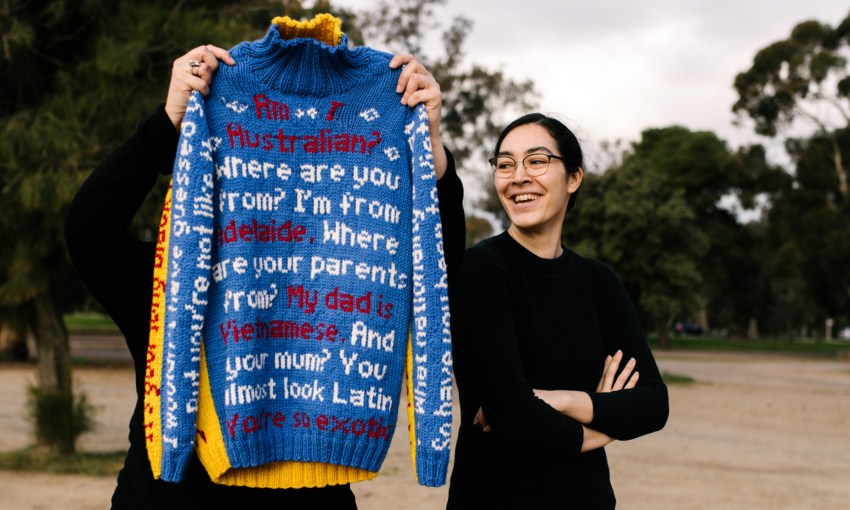 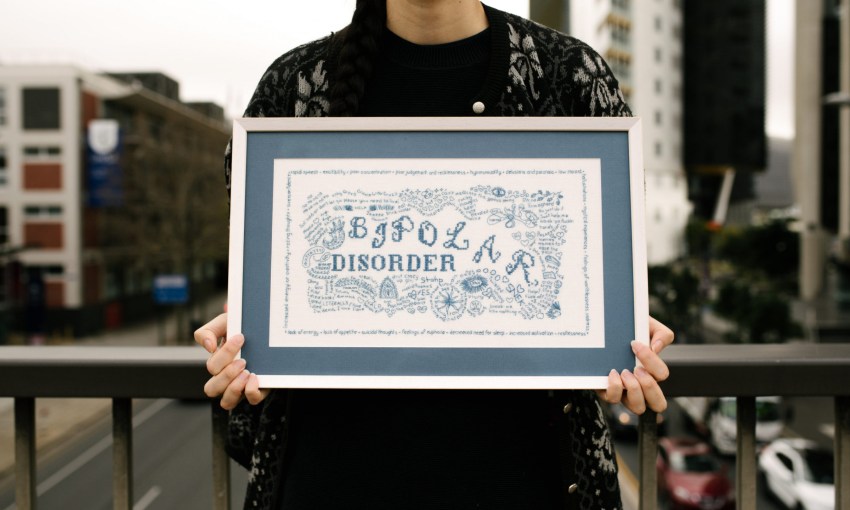 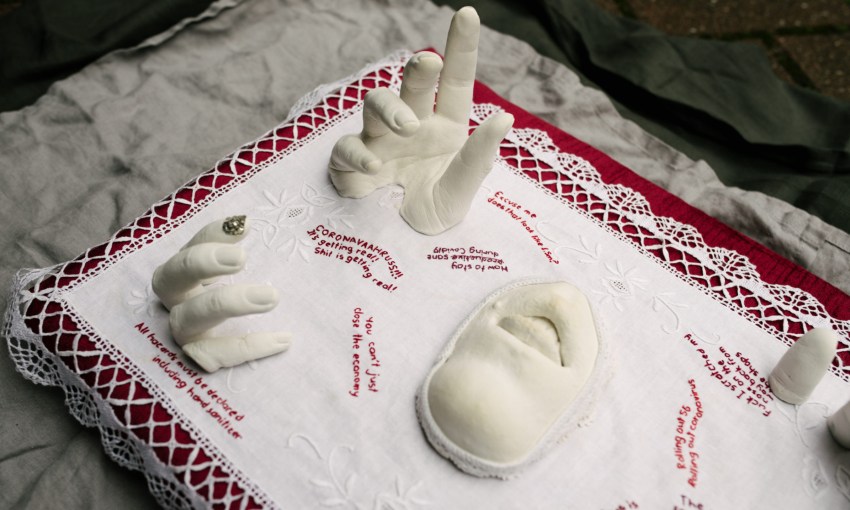 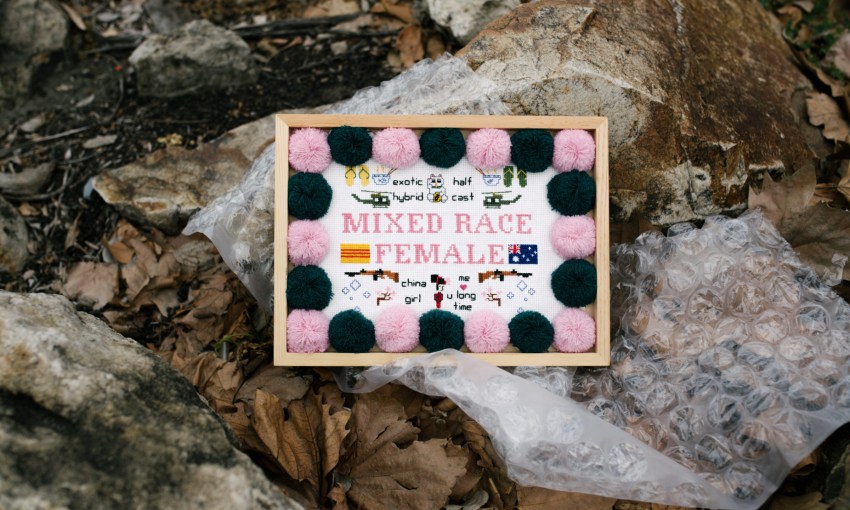 Her SALA exhibition Mixed Race Female launched at Nexus Arts Gallery two weeks ago, and is running until mid-September.

It’s the product of a three-month studio residency where Makeda explored the otherness she feels as a woman with both Vietnamese and Australian heritage, as well as living with bipolar disorder

The high note of this exhibition is Makeda’s Mixed Race Sweater.

Emblazoned on the front and back are colours of Makeda’s dual-heritage, as well as questions she’s received about her appearance.

“On a surface level, most of the work has been about how I feel I’ve been perceived rather than how I actually feel on the inside,” Makeda tells CityMag.

“It was me musing on being interested in people’s curiosity when they meet me.”

Makeda is asked questions such as “What is your heritage?” and “Where are your parents from?” on a regular basis. Sometimes the questions are more loaded, like “Do you speak Vietnamese?” or “Can you make pho?”

Rather than seeing the line of questioning as discriminatory, Makeda says she sees curiosity in these questions. However, she has enjoyed pointing out the practice, and the work has found resonance.

“Some people were saying that they feel it’s quite relatable,” she says.

“I just thought I’d like to bring [these questions] to other people’s attention as well, just so that they’re thinking about the larger reasons why they might want to ask me those kinds of questions.”

The feeling of duality extends beyond her heritage, as navigating a bipolar disorder often leaves Makeda feeling “split”, she says.

“You get some people who are mixed race and they say ‘I don’t feel like I’m split into two,’ and I’ve even had another mixed-race person say ‘I don’t think we should say we’re half this or half that, we can just go I’m Vietnamese or I am Australian,’” Makeda says.

“But I’m both. For me, sometimes I have kind of felt split, and especially with the mental illness.”

Last year, Makeda was diagnosed with bipolar disorder – a mental illness characterised by extreme changes in mood, from massive highs to deep lows.

“With bipolar you can get really positive emotions – it’s like an ego boost,” Makeda explains.

“One of my artworks is actually about an alter-ego, and it can emerge when I’m mentally unwell.”

Ever since Makeda was young, she knew art was important to her. At a young age she learned how to knit.

While completing a Bachelor of Visual Arts, with a major in textiles, at the South Australian School of Art in the early 2000s, she picked up the sewing needles again, and as an adult found the repetitive nature of knitting meditative.

“I [also] really like that textiles are ubiquitous,” Makeda says.

“It touches our bodies every day, it’s woven throughout our lives and I like that different textiles have different meanings – for instance, a wedding dress or someone’s favourite pair of shoes.”

Mixed Race Female is showing at Nexus Arts Gallery until 17 September 2020 as part of SALA. Click here for more info. 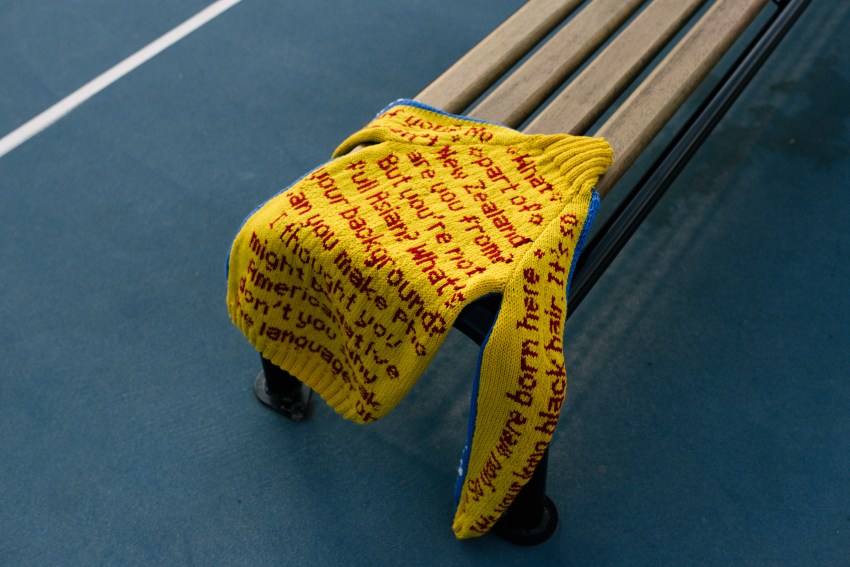