‘The Violet Ballet’ Q&A with Liz Nowell and Sally Smart

In 'The Violet Ballet' Australian artist Sally Smart has translated a Russian ballet into a contemporary visual art exhibition, with a detour through Indonesian performance. ACE Open CEO Liz Nowell toured the exhibition with the artist ahead of its opening this weekend.

Sally Smart knows the Adelaide arts scene; between myriad national and international engagements, she’s been dipping in and out of the city for more than 30 years.

Born in Quorn at the base of the Flinders Ranges, there was never any question that Sally would become a visual artist. Yet her latest work is more theatrical than ever, in a return to the interests of her earlier days.

“I spent two years in Adelaide before I left South Australia, and won the Come Out (now DreamBig) Festival poster competition,” she says. “Once I did an exhibition in the Festival Theatre foyer – large theatre curtain-like works – how funny!”

Now based in Melbourne, Smart returns to Adelaide with a new exhibition of her signature cut, assembled and collaged textile works.

Premiering as part of the 2019 Adelaide Festival, The Violet Ballet is a journey from 20th century avant-garde Europe through to Javanese performance traditions, a collection of costumes held in Canberra, and finally to an exhibition at ACE Open’s Adelaide gallery.

ACE Open CEO Liz Nowell toured the exhibition with Sally ahead of its opening on Saturday, 2 March. 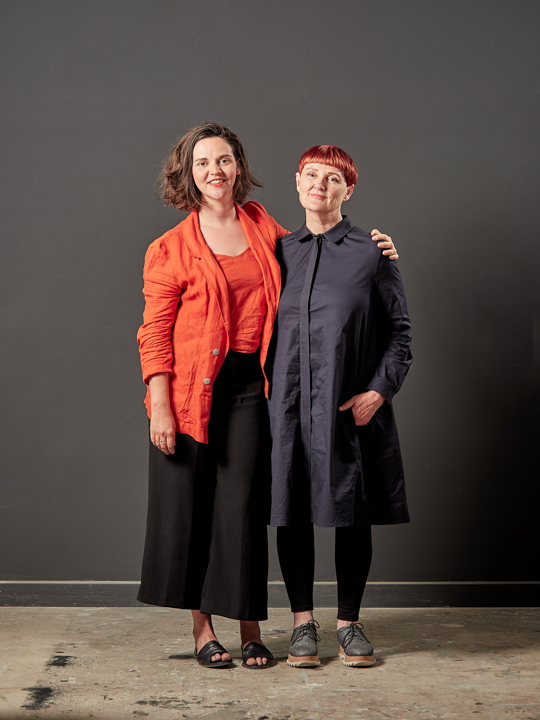 Liz Nowell: What does it mean for you to return to Adelaide and present this exhibition in the context of the Adelaide Festival?
Sally Smart: It’s extraordinary. I’m really looking forward to seeing how my recent work sits in the context of a festival, and how it will be received. I’m also very excited to be in a Festival where Barrie Kosky is presenting The Magic Flute. He’s an extraordinary director so I think that it’s wonderful to be in a festival that he’s included in.

Adelaide has always had an extraordinary culture of artists, and the Festival has always galvanised many artists who live there – but also come from other places – with incredible memories and experiences.

LN: You’ve taken part in some very big opportunities over the years, and you’re very much considered one Australia’s most respected and renowned contemporary artists. What have been some of the highlights in your career?
SS: One of the really fabulous experiences was a body of work I did called The Exquisite Pirate which took me, in a five-year period, to over 10 different countries and countless exhibitions around the world, and my New York gallery representation which continues today.

After an exhibition I had in London in 2015, an invitation came to do an art collaboration with the Italian fashion house Marni, their pre-fall 2017 men’s and women’s collection. They had been looking at my work and identified with the way I work with collage and colour. This took images of my work worldwide in a very incredible way.

LN: The Violet Ballet begins with the legacy of the ground-breaking Russian dance company, the Ballets Russes, who were widely known for their innovative, multidisciplinary collaborations with artists like Matisse, Picasso and Sonia Delaunay. The National Gallery of Australia in Canberra holds one of the world’s richest collections of their incredible costumes. Can you tell me more about your interest in the company?
SS: It’s grown from a long-held fascination, particularly around the involvement of visual artists in a ballet company, which is rare even 100 years later. What the producer Diaghilev was doing was absolutely extraordinary: to bring together, time after time, the most avant-garde artists to create and work in collaboration. That’s a compelling and contemporary attitude.

I asked James Mollison [former National Gallery of Australia director], who had acquired the Ballets Russes costumes if, when restoring the costumes, they had found any fragments of recycled costumes – like Picasso mixed with Delaunay – because of my interest in cutting and collage.

So I asked “Did you find layers of costumes within costumes?” and Mollison said no. But I wrote that down as a note to myself – if it hadn’t happened, then maybe one day I would do it. And about 10 years later I did. For The Violet Ballet I have made digital cut-ups, reconstructed them as textile assemblage works, and now performed them as costumes. 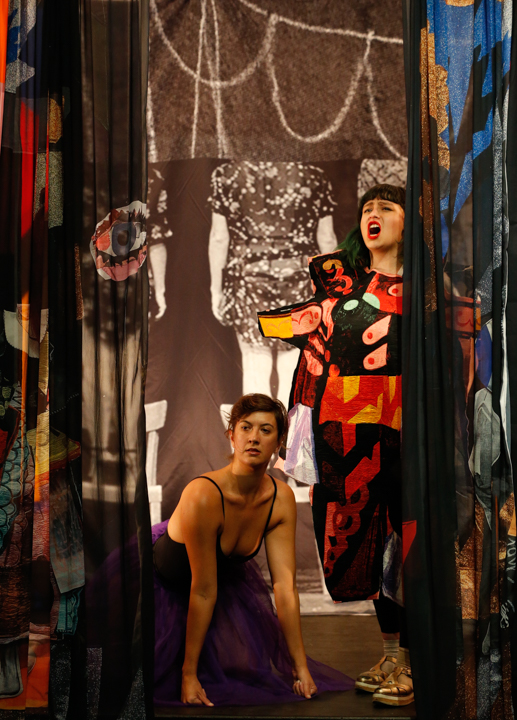 LN: You’ve chosen to base The Violet Ballet on one Ballets Russes’ work in particular, Chout (Tale of the Buffoon). It’s a murderous hybridisation of two fairy tales, where a swindling buffoon character tricks seven other buffoons into killing their wives. Interestingly for a dance company, it was a visual artist, [Mikhail] Larionov, who not only designed the costumes and sets, but also created the choreography for this work.
SS: It’s a complicated story, and a simple story in many ways – but it was the buffoon and ‘trickster’ character that I was interested in. It’s absurd. It’s comic. It’s also quite brutal and quite emotional. So I was attracted and repelled by it at the same time. I was also interested in the costumes – some of the most compelling costumes in the NGA are from Chout, and I just thought ‘Wow, how did these incredible costumes come from this story? Was it embedded in this story, or was it just Larionov?’

LN: The collaborative nature of the way the Ballets Russes worked has a particular resonance with the way that you work: you collaborate with dancers, a writer, an opera singer, other visual artists, and you work with artisans in Indonesia who embroider your designs. How did this Indonesian connection unlock the Ballets Russes further for you?
SS: I wanted to go back to that original idea of mixing the costumes, cutting and combining them, so I had some embroideries made from patterns and designs I created digitally. When the artisans embroidered the works, I recognised that there was much more embedded in this work. I felt this very strong visual connection – that there was a resonance to Indonesian wayang [performance] and Indonesian puppets. For the Indonesian artisans, the patterns and style developed by Larionov were familiar, yet had come from Russian folk culture.

I started to consider the Ballets Russes through the legacies of colonialism and orientalism – I was interested to draw on these connections. I started to look at Javanese dance, with its connection to the wayang kulit (shadow puppets), and the relationship between moving figures and a shallow space – and I connected this to a cubist depiction of space. European dance historically is about the body projected off the ground; and Javanese dance is linked to being on the ground.

What’s incredible, is that only recently I discovered that Larionov actually was influenced by Indonesian puppets. This was quite profound, because what for me was a very strong ‘drawing in’, a compulsion, a need to sort of reconcile… it was actually there all along!

LN: Can you describe the exhibition visually for us? We start with an installation of some of your re-imagined costumes…
SS: The Violet Ballet is multi-layered and complex, so we’ve tried to make the form of the exhibition as simple as possible. You will basically see a three-channel video work with one major screen and two wings, if you like. In front of that will be a curtain.
LN: What?! Sally, I’ve just realised it’s like a theatre, the way you’ve installed it. Amazing, I just got that! That’s so awesome! It’s like stepping into a theatre!
SS: Yes! And before you step into the theatre you step into the–
LN: Dressing room!
SS: Yes, it could be the dressing room or it could be the foyer.
LN: This is amazing! What a revelation!
SS: It’s a simple as that.

The Violet Ballet opens at ACE Open at 5pm on Saturday 2 March, with a free performance at 6.30pm. The exhibition continues through to Saturday 27 April.