Listen up for some cutting-edge drama

‘Theatre is my church,’ says celebrated local playwright and actor Elena Carapetis – and you’re invited to join the congregation this week as two of her powerful plays are shared online.

Elena Carapetis’s Helen Back is a play she doubts will ever see the light of day on stage, despite it having been shortlisted in 2012 for the Jill Blewett Award for Playwriting.

Comprising a series of vignettes, each featuring a character called Helen, it explores the commodification of beauty and the pressure society places on women to stay youthful and attractive.

The Gods of Strangers is available to stream online free until June 29; sign up on the State Theatre SA website to watch it.

Helen will be available to listen to via Theatre Republic’s podcast page from June 24 until July 21.

“There’s a scene in the play where the audience watches while a woman gets plastic surgery on her face, and she’s awake as she’s getting it done and telling the story about her relationship to her face and her beauty,” Elena says.

“I thought it was a great idea – but how would you do it? You’d have to have all these special effects and stuff.”

Elena says that when she started writing Helen Back, she had asked herself what things she had never seen on stage before that she would like to see. She pushed things to the extreme, which playwrights have to do sometimes to develop their skills, even if the words might end up languishing in a bottom drawer.

She’s since written a number of other scripts that have been produced, and this one might well have stayed in the drawer if she hadn’t been prompted to revisit it for local independent theatre company Theatre Republic’s new COVID-19-inspired audio series, PodPlay.

Helen, a monologue from Helen Back, will be the first PodPlay work to go live this week – at the same time State Theatre Company South Australia and Country Arts SA present a free stream of the filmed recording of her 2018 tri-lingual play The Gods of Strangers.

Elena says Helen was originally inspired by a documentary she saw in which a woman stayed awake while undergoing plastic surgery so she could tell the surgeons exactly how she wanted her face to look. In the documentary, as in Elena’s story, it unravels that the woman’s obsession with her looks is based on trauma she has suffered.

When Theatre Republic artistic director Corey McMahon put out a call for South Australian playwrights with unproduced scripts suitable to adapt for audio, Elena realised this was the ideal format for the story.

“People’s imaginations are so powerful they will fill in all the gaps,” she says.

“Your mind is a powerful image-maker, which is why the Greeks used to do all the horrible gory stuff off stage and then someone would come in and describe it.”

Elena and Corey reconfigured the script for Helen to suit the audio format, and Adelaide actor Anna Steen was selected to voice the piece. The addition of various sound effects adds to the ambience and impact.

“This is a really great exercise for people just to pop in their headphones and shut their eyes and really give into the power of what sound can do,” Elena says. 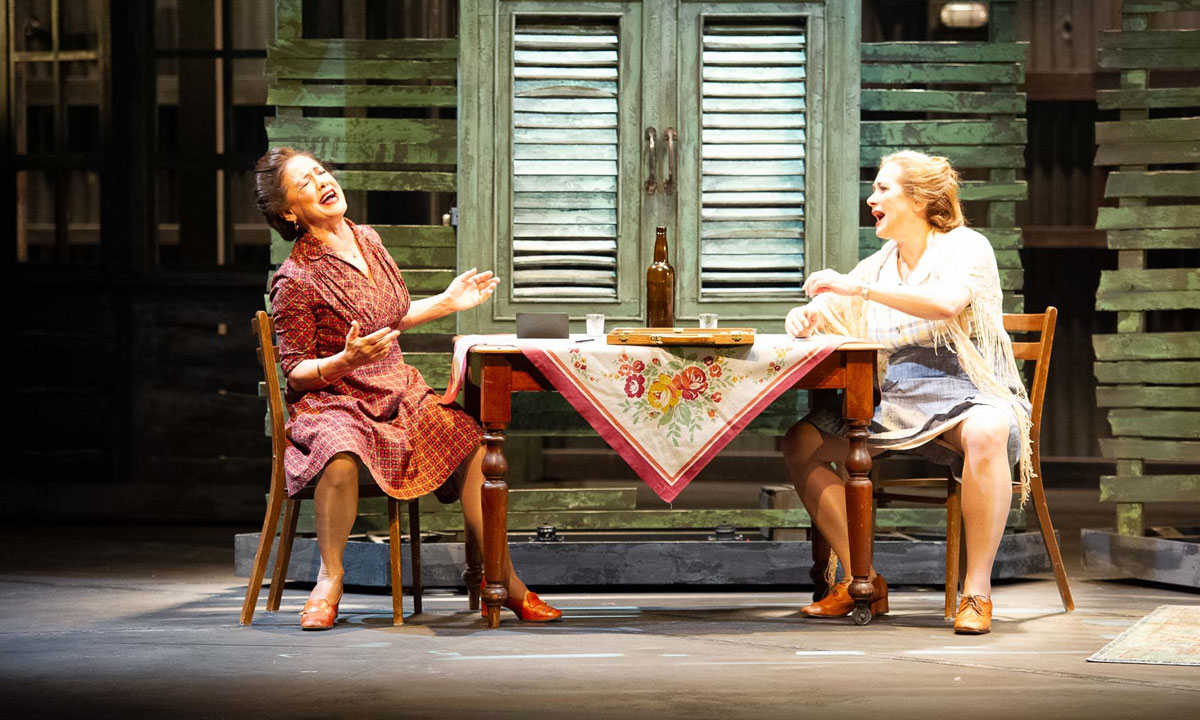 Dina Panozzo and Deborah Galanos in The Gods of Strangers. Photo: Chris Herzfeld

Unlike Helen Back, The Gods of Strangers did go into production and had a successful theatre run in both Port Pirie and in Adelaide.

Inspired by Elena’s own family history and the oral histories of other Greek, Cypriot and Italian families in regional South Australia, it is set in 1947 in Port Pirie, where two women – one Greek and one Italian – each have their lives interrupted by the arrival of strangers at their homes.

A video recording of the live show, filmed by Adelaide creative agency Kojo in 2018, is being streamed online until June 29.

“It was a three-camera set-up,” Elena says of the filming. “So basically over two different nights, over two different productions, the cameras were set up and they captured the footage and what you are going to see is this beautifully rendered, high-definition, gorgeously edited together recording of the show.”

The decision was made to film the production so it could reach a broader audience than that which would have the opportunity to see it in South Australia.

As Elena points out, work created by and for people from non-English-speaking backgrounds is still relatively rare in Australia, yet there’s something very powerful about being able to see your story and your language reflected back to you.

“I also really wanted to make something that my Mum and Dad would really like, and I know that sounds cheesy and corny, but I wanted to break down this idea that theatre is elite and that theatre is super arty and inaccessible.

“I just really wanted to make a ripping yarn, a fantastic story, so that people go and get completely absorbed and also feel that the story is familiar.

“It places women at the centre of the story; the women are over the age 60 and English is their second language and, for me, that is quite revolutionary.”

Exploring broad themes such as displacement and the way society treats people from different cultural groups, The Gods of Strangers was also her way of honouring her own parents, who met in Port Pirie, and her Greek and Cypriot ancestors who came to Australia to give their descendants a better life.

Elena says theatre is her church – “it’s the place where I express my connection and humanity” – and she was thrilled that when her play hit the stage it resonated with audiences from all backgrounds.

“We had families come to the theatre – three and sometimes four generations of people. There was a beautiful Italian family who brought their nonna; she was 94, she was in a wheelchair, and she grew up in Pirie … it was amazing.”

She says she has never witnessed an audience so alive and “unfiltered”: “It was a boisterous audience who came from all over the world – there was a raucousness and an unfiltered energy … people were just responding to what they were seeing.”

Nothing can replace the magic of the exchange of energy that occurs between performers and audiences in a theatre, Elena says, but in COVID-19 times, the online offering of The Gods of Strangers is the next best thing.

“I invite people to imagine what it would be like to be sitting in an audience watching it with three generations worth of people who speak several languages.” 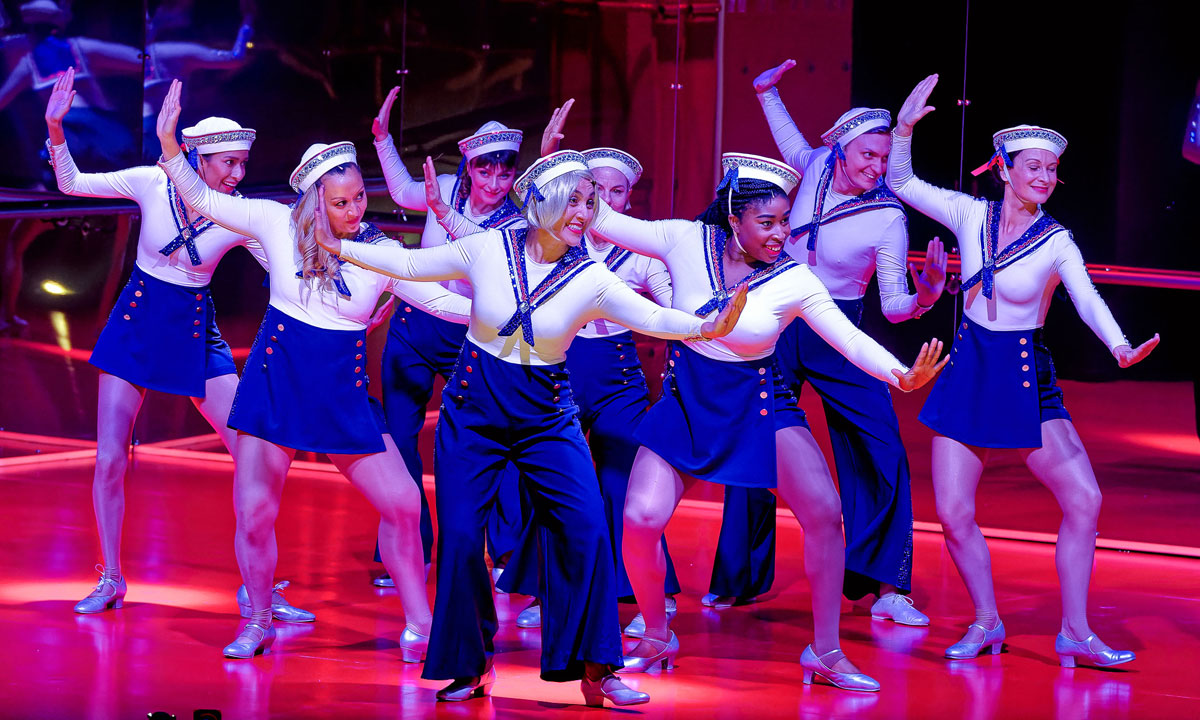 Elena, who is also a successful screen and stage actor, was performing in the State Theatre Company SA and Belvoir Theatre co-production Dance Nation when the COVID-19 shutdown took effect in March. The show had enjoyed a successful run at the Adelaide Festival, but its five-week Sydney season had to be cut short.

She is also in the cast of the Theatre Republic play The Bleeding Tree, which has had its season postponed until the end of the year, and has lost other potential television, film and voiceover work due to the pandemic.

Writing has helped fill the gap, with Elena working on several projects including a new short monologue for a Playwriting Australia series called Dear Australia that will be streamed at the start of July.

“But ultimately, we all can’t wait to be back in the theatre,” she says. “That’s where we want to be.”