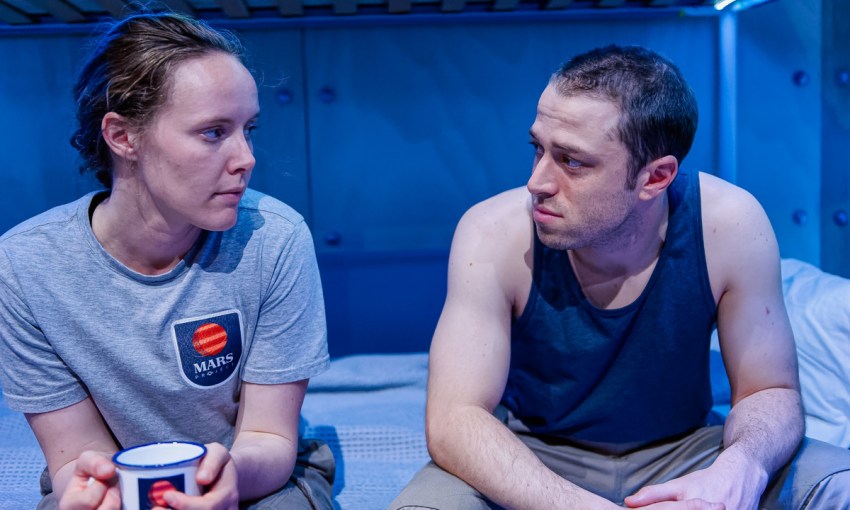 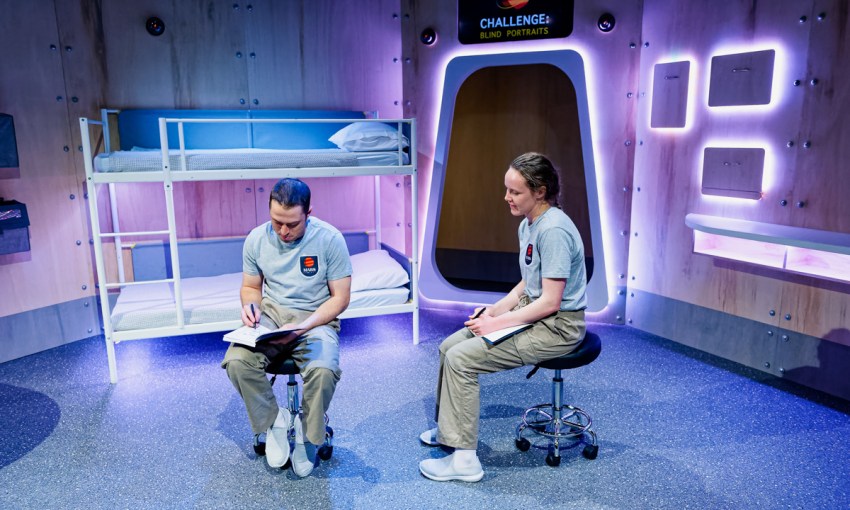 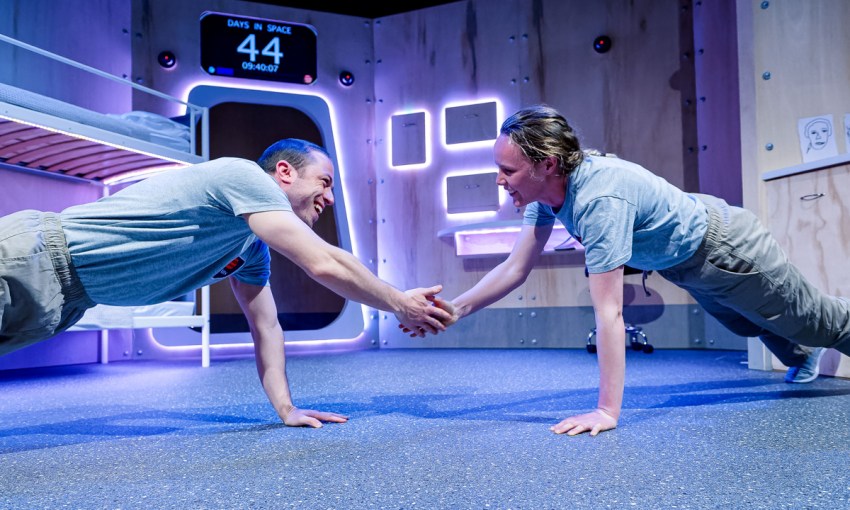 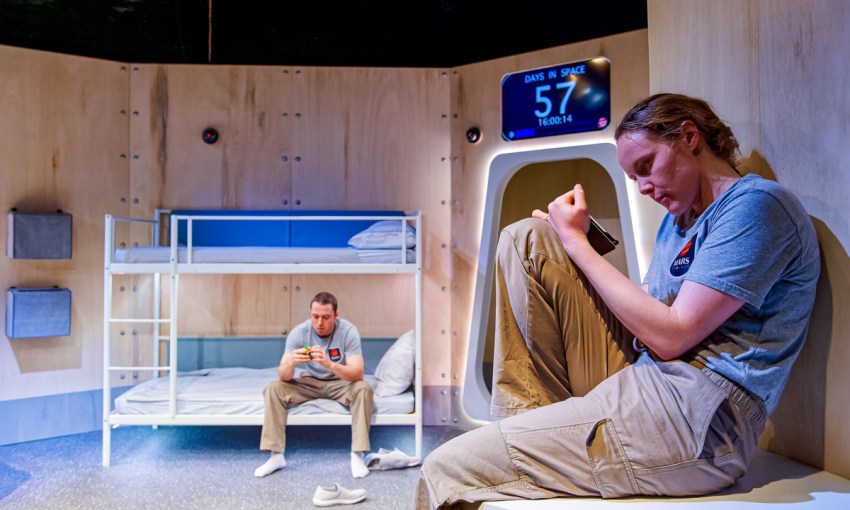 Limit started on the page as a tone more than a story.

The idea came to the Adelaide-raised and Melbourne-based playwright and actor Sophia Simmons as “this very small image, I suppose, of these two characters on a ship with a blue light flashing. That’s the first thing that I had,” she tells CityMag.

Limit puts two explorers, Marc and Sarah, on a one-way trip to Mars. The duo was awarded tickets to the journey by public vote, as part of a reality TV show funded by a billionaire entrepreneur.

Through this setting, Sophia examines concepts of power in various forms: between men and women, two people in a relationship, television producers and their subjects, as well as the power reality television viewers have as active bystanders (or passive participants) in potentially fraught situations brought about for the ultimate goal of entertainment.

While there is a wealth of Earthly environments where these same relationships play out – many of which are currently being explored in both fictive and factual television and film narratives – space, for Sophia, is a means of highlighting humanity and its hubris and contrasting it against our outsized ambitions. 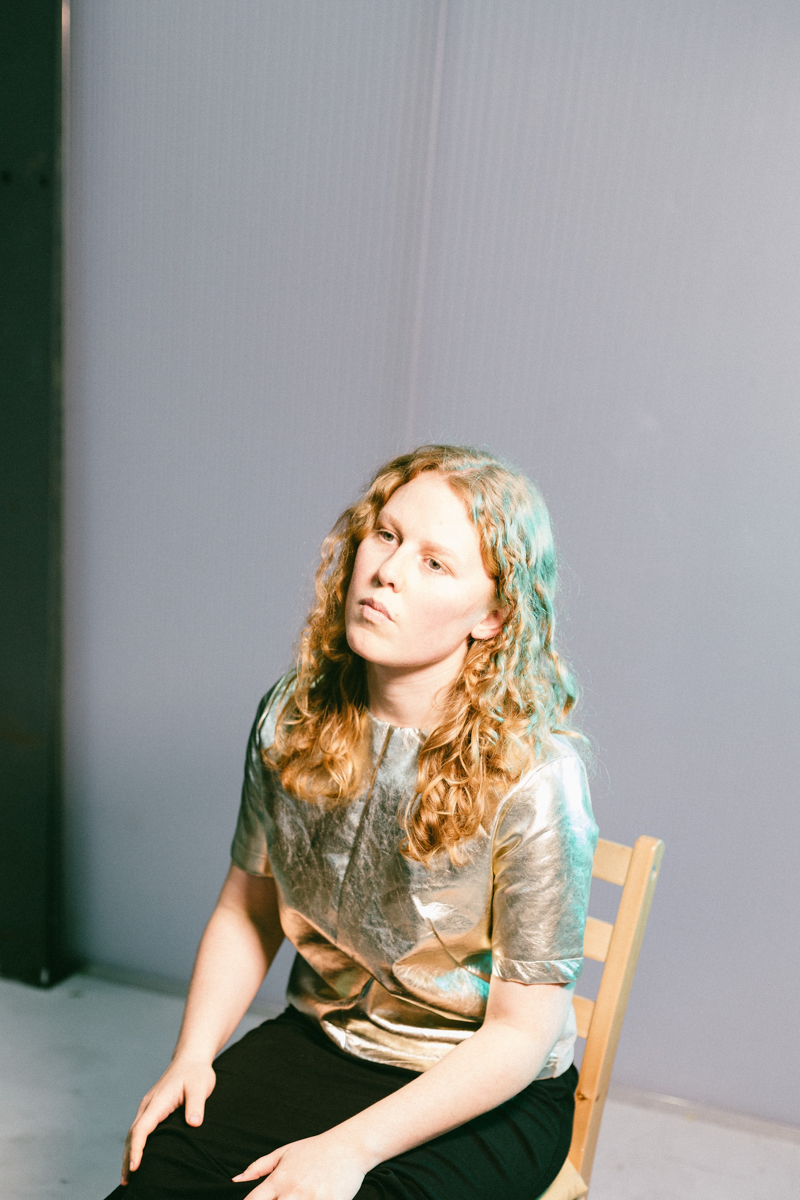 “Space is so interesting because it’s kind of right on our doorstep at the moment,” Sophia says.

“It’s a really interesting time in human evolution, where we have all of this amazing technology available to us. We could feasibly go to Mars right now, we have all the resources available, and we’re kind of on this cusp of going out into the universe and seeking to keep expanding as a species, when there’s still so much we don’t understand about ourselves.”

Sophia saw none of this coming in the process of writing the initial draft of Limit back in 2014, and the work’s unfurling over the last five years has been a gratifying intellectual pursuit.

In the course of its production, Limit has gone through an Australian Theatre for Young People Fresh Ink mentorship program with Nicki Bloom, a small portion of it was presented at the National Play Festival, and the work first came into contact with South Australia’s State Theatre Company when director Shannon Rush pitched it to the company’s outgoing artistic director, Geordie Brookman.

“They offered us a week-long research and development slot a couple of years back, and so we used that to work on the script, to get it on the floor with some actors, to break it down dramaturgically, unpack the questions,” Sophia says.

“It’s been very satisfying, it’s like a puzzle, it’s figuring out what’s going on, and each time getting closer and closer to cracking it.”

Through its inclusion in the State Umbrella program, Limit has come into its final form with the collaborative efforts of a full theatre team. The experience was equally humbling and validating for the young writer.

“You’re never going to know how to write for a mainstage if you don’t actually get the opportunity,” Sophia says.

“The fact that a set is being built, this whole team making this happen, this big machine working to bring it to this level of production is so unique, and I wouldn’t get that opportunity without Umbrella.

“You have to learn by doing a lot of the time, and that’s how you hone your craft and get better and get to that level that you might eventually actually make money. But unless you can actually get out there and work and test yourself in these environments, it just wouldn’t happen.”

The fruits of Sophia’s five-year journey with Limit are now on show at Bakehouse Theatre until Saturday, 9 November. For tickets and further information on the show, see the State Theatre Company website.