Aboriginal and Torres Strait Islander people are known for maintaining connection to their history through a millennia-old practice of oral storytelling.

Colleen Strangway’s virtual reality songlines project is due for release in August 2021.

But Adelaide-based photographer Colleen Strangways wants her stories to go a step further, so she’s creating virtual-reality (VR) film works that will allow city-based kids access to country from hundreds of kilometres away.

“You become emotionally tied to the immersive space when you participate through VR, which is 360-degrees,” the Arabana, Mudbura, Gurindji and Warlpiri woman tells CityMag.

“And then there’s the record-keeping aspect for future generations. We have our seventh-generation down the line that can put this [headset] on and view it and see what the country used to look like, and if there’s any changes.”

At the beginning of the 2019 Adelaide Fringe season, Colleen, who also runs Nharla Photography, was first exposed to the world of virtual reality.

The South Australian Film Corp and the Adelaide Fringe hosted an event about the technology, which places viewers within a three-dimensional simulations seen through goggles.

Colleen had her “mind blown”.

“It was fantastic going to this event and learning from the industry professionals,” she says. “It got me excited.”

From there, Colleen turned her mind to trying to understand how she could wield VR as a teaching tool to heighten First Nations narratives.

She came up with the idea to use virtual reality as a medium to share Arabana cultural stories and songlines.

I really tried to instil the importance of utilising our elders as our cultural compass.
— Colleen Strangways

She reached out to the University of Adelaide’s Mobile Language Team (MLT), which helps revive Indigenous language, to see if they wanted to jump on board. They were receptive, as was KU Arts.

“I said, ‘Hey, I’ve got a great idea – how about we get a VR and go out to country and we’ll do some filming of elders and a little bit of the country so people can understand what Arabana is?’” Colleen says.

“Because we’ve got the third largest salt lake, which is cool, Kati Thanda / Lake Eyre. How good would it be to showcase that in VR, in that space, with a viewer – whether they’re Aboriginal or they’re non-Indigenous or school child or whatever it is – come in and view our country in that immersive 360 [degree] space?” 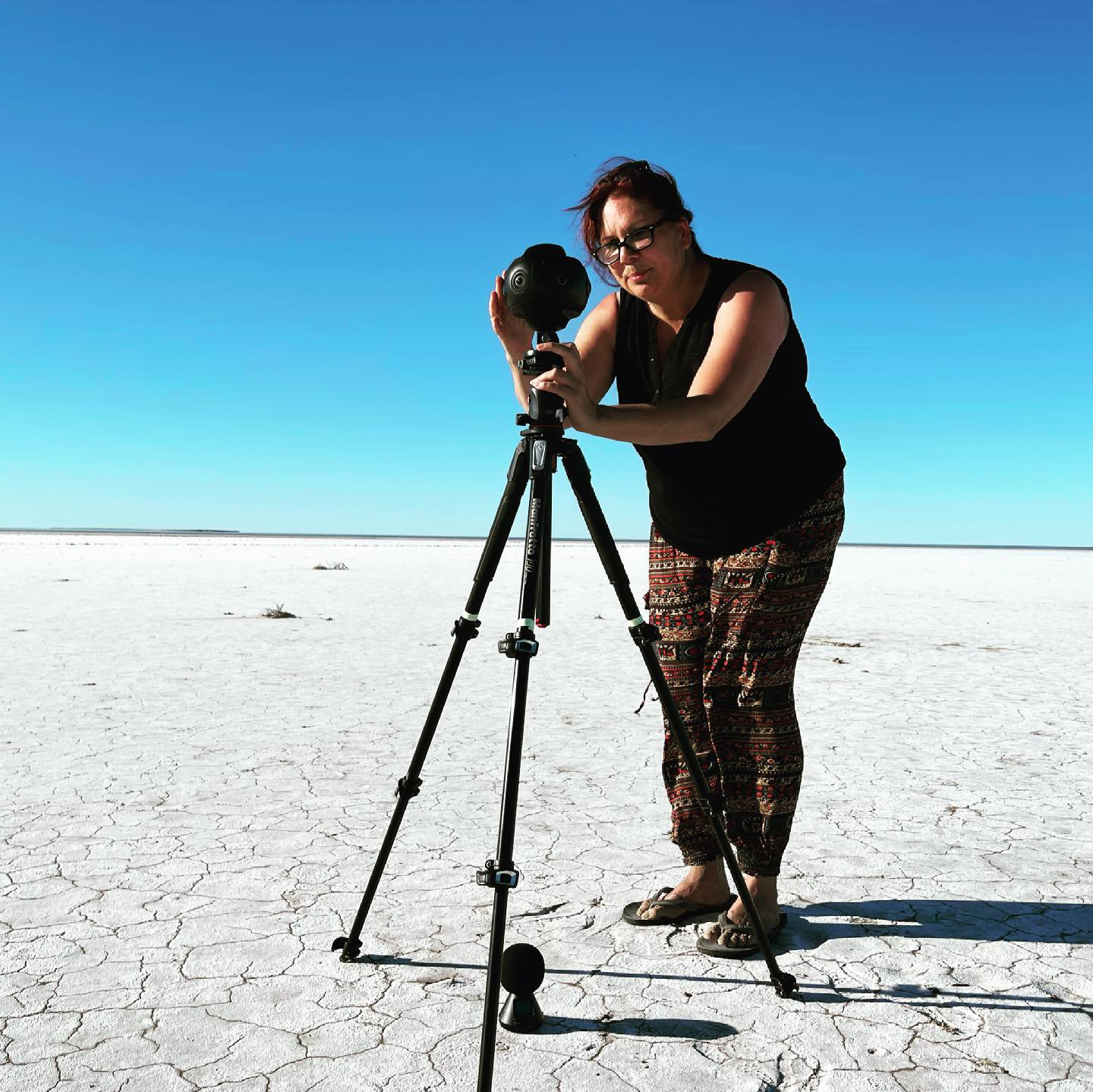 Eleanor McCall is a linguist with the MLT and is working on Colleen’s project. She says COVID-19 lockdowns presented real issues for Aboriginal people living away from their communities and who wanted to connect with culture.

She says the format of virtual reality is “incredibly suited” for the already existing methods of language learning and teaching used by Aboriginal Australians. In fact, it’s more effective “than the reading and writing styles of language learning dominant in modern classrooms”, she says.

“In these films you are sitting, immersed in the country, listening to an Elder. You don’t interrupt, you listen, and you look around at the country as they teach the names of places and tell the stories of these places.

“We believe that virtual reality is a medium which really reinforces and celebrates Aboriginal Australian language pedagogies.”

Colleen says over the Easter long weekend she went to “different areas and springs” – including former Arabana mission Finniss Springs, near Marree – to capture the content she needed for the songlines project.

She is currently in the editing phase, with the piece slated for an August release. 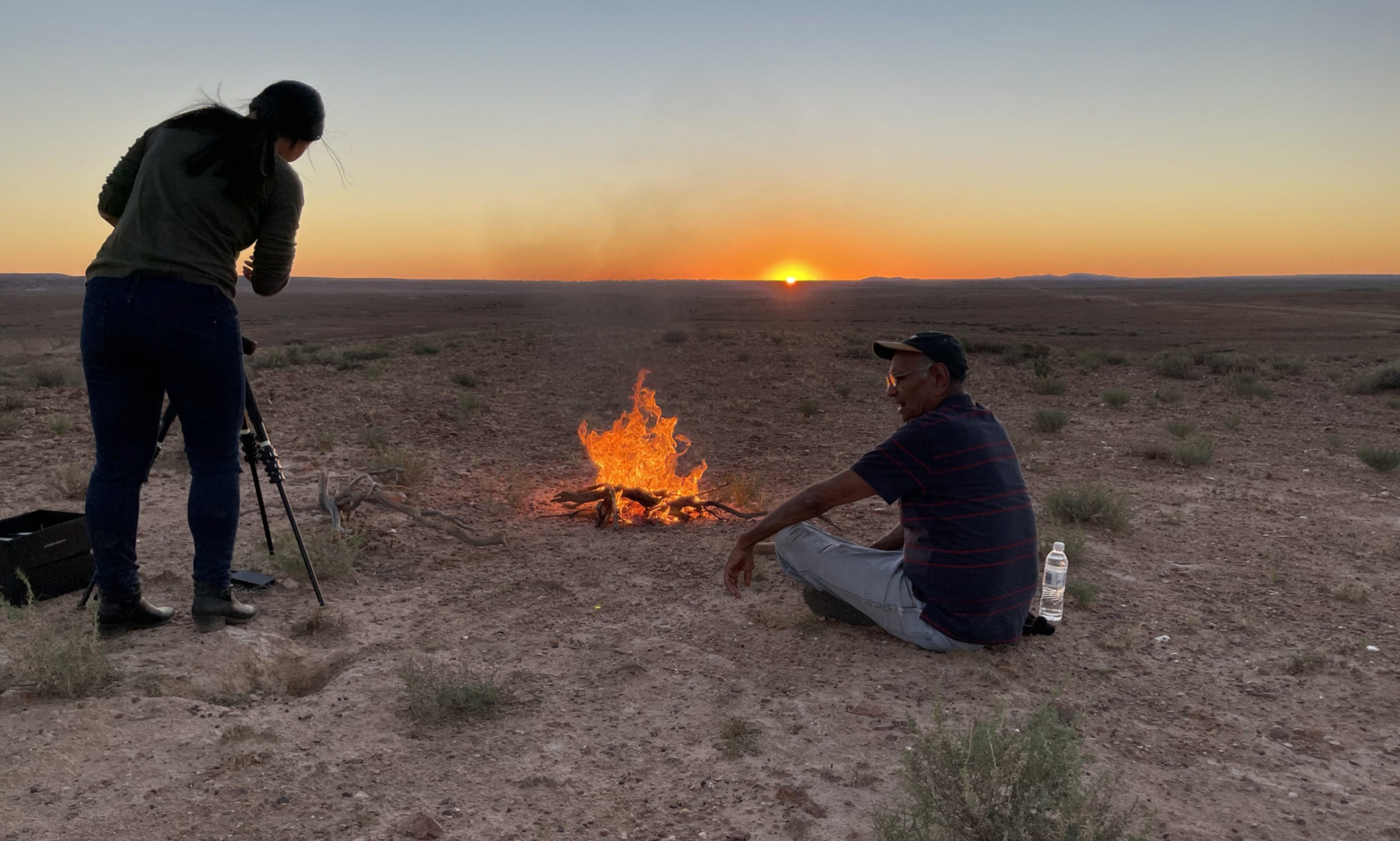 Although the film is about Arabana culture, water features prominently in the piece, as it is “so crucial” for Colleen’s people.

Historically, Arabana people often lived in arid climates and needed to know which rock could be turned over to reveal a water source.

“I showed the young fellas, [who] were really shocked and surprised. It was just flat landscape, and there was no trees, just all little shrubs, [but] I took them to a spot on the ground, lifted the rock up and there was water,” Colleen says.

“That’s how ancestors were surviving, because they knew where all the little spots were where we can drink fresh water.”

Preserving the water sources in the landscape is also crucial, Colleen says.

Her VR project aims to educate viewers about the risk of climate change, and how “mining” and “pastoralists” are threatening our water supplies.

Colleen says once the piece is released, it will hopefully tour through metropolitan Adelaide venues and festivals, including the Art Gallery of South Australia’s Tarnanthi festival and Tandanya on Grenfell Street.

It will also be viewed regionally in Port Augusta at schools and community centres, with kids accessing it online or with cardboard headsets attached via mobile phone.

Colleen hopes this will help connect the students connect with elders, too.

“I really tried to instil the importance of utilising our elders, using them as our cultural compass,” she says.