Owner Ray Harris reflects on five years of exhibitions as the church-cum-studio-slash-gallery approaches its final public event, a four-hour bushfire fundraiser, before it's flattened by construction crews and turned into a block of apartments.

“It’s got this strange baptism pool and sloping floors, also just some of the architectural features are quite nice,” Ray says of the building, which was built in the 19th Century and existed predominantly as a Church of Christ, but for the last five years offered a place for Adelaide’s experimental art scene to flourish.

“Probably the biggest highlight was the three curated exhibitions and performance events that we put on.

“Everyone was just really into it and they’re like, ‘There’s nothing like this in Adelaide, we’ve got to do it again.’ It was really affirming.”

Holy Rollers Studios opened in 2015 after Ray – an artist who explores how humans cope and manage the complexities of trauma through video performance and sculptural installation – needed a studio space to work.

She settled on the 69 Prospect Road church because it had room to practice and exhibit, and most importantly rent was cheap.

She subdivided the 700-square-metre back space into 13 separate studios and the hall into an exhibition space and venue for hire.

By 20 February 2020, the hall will be vacated so urban developers can turn it into a sprawling condominium and eventually, in two or three years, the artists’ studios will also bite the dust.

“They’ll knock down all of this, build some huge apartments, and I think they want to put a display home in here (the hall),” Ray says.

For years Holy Rollers Studios was the nexus for grassroots arts communities.

It offered sanctuary to those exploring language – nationally acclaimed local poet Olivia De Zilva held a reading there  – as well as swimmers – performance artist Michael Schaefer cut laps in the baptism pool as part of Channel This (2017). 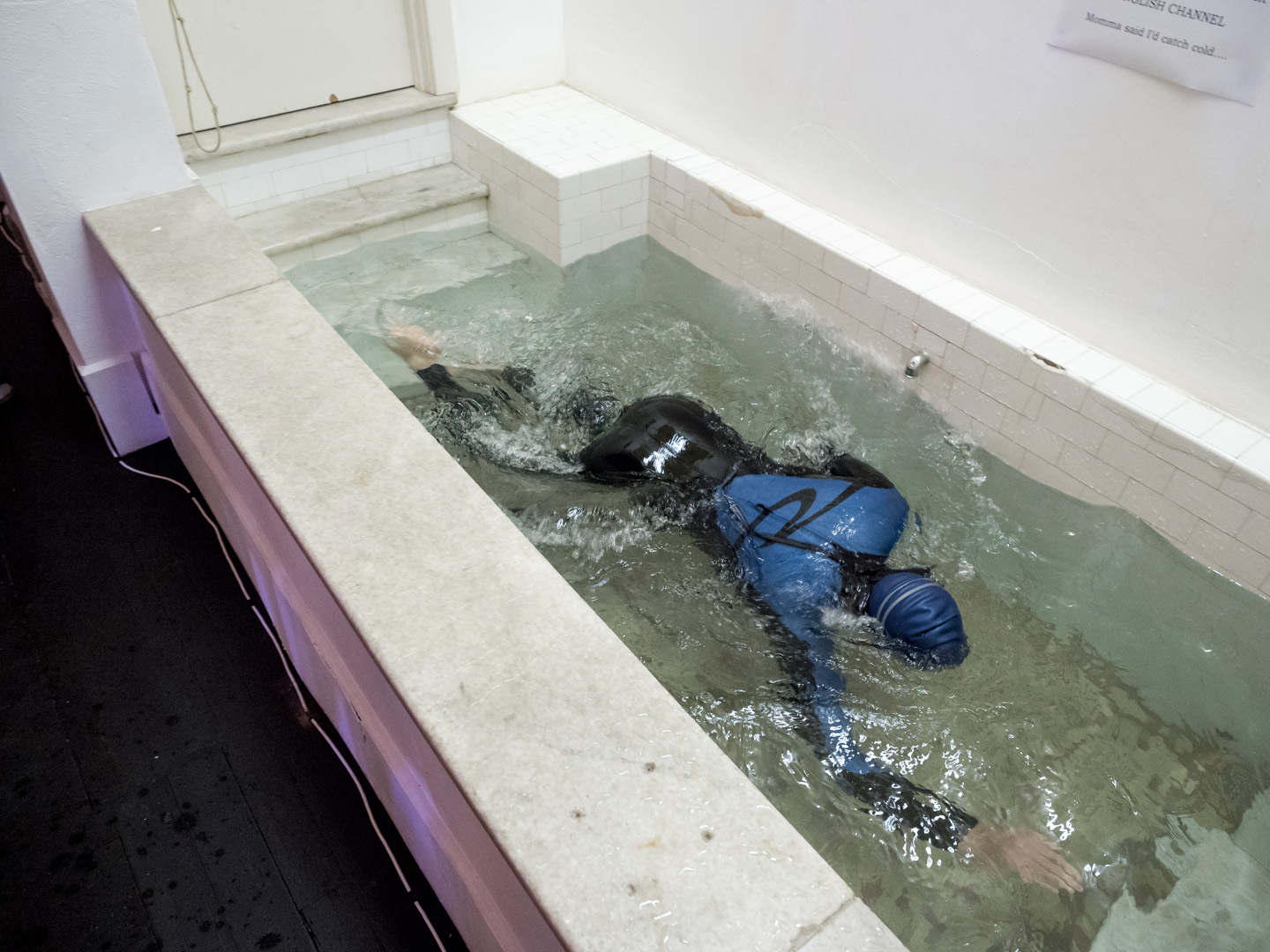 But most importantly it was a platform for existing experimental artists, like Michael Schaefer, to make or showcase work without paying a fee to exhibit – there were three major events: Soft Spot, Hard Feelings (2017), Psychache (2018) and The Scene is the seen (2019) at Holy Rollers Studios – and be part of a scene.

Ray often applied for artist’s grants when curating exhibitions, and paid artists fees for their work. This to her was important.

“I couldn’t pay them a lot, but it was something,” Ray explains.

“The last exhibition, the art director of the Art Gallery picked it as her SALA pick, because I always did it during SALA. People like Paul Greenaway loved them every year.”

Some local galleries such as FELTspace and Floating Goose Studios Inc. require artists to pay to exhibit.

Now that Holy Roller Studios is coming to a close, Ray Harris is having major nostalgia all the time. Photo: Angela Skujins

Holy Rollers Studios has been crucial to developing artists, but Ray and fellow artist Deborah Prior, who helps run volunteer environmental advocacy collective SA Arts for a Cause, aren’t finished just yet with the hall.

This Sunday, 9 February, the Holy Rollers Studios church will transform into a celebration all for a good cause.

Patrons will be able to bid on works by high-profile South Australian artists such as Cathrine Truman, Roy Anada, Sera Waters and others at a donated price.

In a move Deborah dubs as “performance art,” artist Monte Masi and Cynthia Schwerstik will be event auctioneers. But they will not negotiate on price for the bake sale, which promises to offer infinite cupcakes – with vegan options – at a fixed price.

Fifty per cent of all proceeds from art, cupcake and raffle sales will be donated to a World Wildlife Fund’s charity dedicated to bushfire habitat and animal recovery; the other half will go towards Indigenous fire management network, Firesticks Alliance Indigenous Cooperation.

“I think it’s going to be a really good event and I’m really looking forward to it,” Deborah says, adding that some artists want to be a part of the bushfire rebuilding process, but financially can’t.

“Some artists want to give things that aren’t from their pockets but can’t.

“We’ve got an amazing group of artists that have been working on top of their day jobs and night jobs to pull this together.”

Despite this being one of the last public events at Holy Rollers Studios, this will hopefully not be the last time we see Ray transform an old forgotten space into something “not like anything in Adelaide.”

Image 1: Ben-Hur Winter performing Border Crossers (2019), while Derek Sargent and Jess Miley’s photographs The Grave Project: Queer Expats of Paris (2019) sit on the side, as part of the The Scene is the Seen exhibition curated by Rayleen Forester and Ray Harris.

Image 4: Alycia Bennett and Florian Cinco performing Reasonable Doubt (2018) in the background and Elise Bonato performomg cerussa (2018) in the foreground for Psychache (2018) exhibition curated by Ray Harris and Adele Sliuzas.

Image 5: Kaspar Schmidt Mumm performing Knead (2019) with Nathan Peacock’s work Untitled (2019) hanging in the background. This was part of The Scene is the Seen (2019) exhibition curated by Rayleen Forester and Ray Harris.