Nottingham punk duo Sleaford Mods make music about life on the poverty line. But singer Jason Williamson admits the capitalist model he fought tooth and nail against for years is now of service. 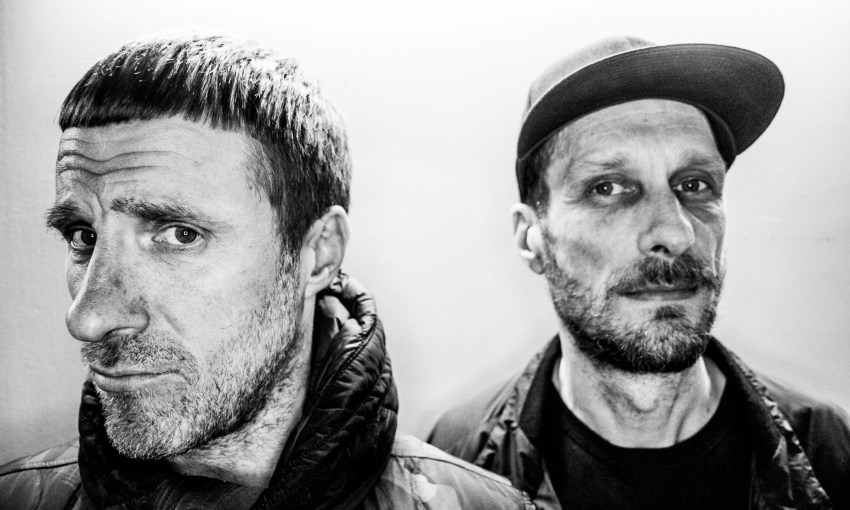 “I am all the things that entrap me in the system.”

Sleaford Mods are playing at WOMADelaide

Born in 1970 to a family on a “council estate in a small town” in Nottingham, Jason never belonged to the upper class. It was 35 when Jason realised he didn’t want to hack low pay packets and nihilism. He wanted a future.

“I thought, ‘This is shit, I’m skint; I’m going to have to work shit jobs for the rest of my life,’” he says of working in factories, warehouses, cafés.

“I just felt like I was fighting a losing battle.”

“Once I discovered the spoken word – the kind of rap or the rant or whatever it is – I was away, you know. It was a paradise of creative possibilities.”

Jason auditioned for acting scholarships at elite acting schools but felt estranged by his peers. They looked like they came from “better backgrounds, more financially-able backgrounds,” he says.

In 2007, after learning how to play the guitar, Jason created Sleaford Mods – a stripped-back outfit that, through pointed poetry and minimal beats, spits on the systems that widen class gaps, entrench poverty and alienate individuals.

A year after his debut release, Jason dropped a lo-fi four-and-half minute track ripe with the listless anger of someone who would rather have “drugs to take and a mind to break” than work in a revolving door of low-skilled positions.

“I’d just end up robbing the fucking place,” he says on ‘Jobseeker.’

In 2012, Andrew Fearn’s brutalist loops provided architecture to Jason’s barbs. A year later in 2013, the team released ‘Fizzy’ on their second album together, Austerity Dogs.

Over Andrew’s innocuous three-note guitar hook, Jason yells – as if he’s ripping out his vocal chords in the process – about a job that left him “fucked on / devoured / puked on / and sucked up.”

This idea of being trodden-on, by society or a workforce, runs deep within Sleaford Mods’ DNA. Since 2013 the band have released five albums and a slate of EPs which have given them space to explore austerity, sobriety and profanity, and adjust to what the band means to them.

“Were we ever important? Who knows… It is to me. It’s my life, my creative life. There isn’t any other music that turns me on as much as what Andrew does, do you know what I mean? And, you know, to write to it’s just brilliant. I believe in it 100 per cent.”

Sleaford Mods are playing at one of Adelaide’s most premium music festivals, WOMADelaide, in March, as part of a national tour.

When CityMag asks Jason how it sits with him playing to an elite crowd – one which can afford a minimum of $155 for a Monday pass to see him perform  – he was conflicted.

Before being billed as Sleaford Mods, he says he hadn’t been able to afford to go to festivals.

“I was never interested because it was not accessible,” Jason says.

“When you’re coming over to a new territory, new country, you’re completely blind and you just don’t know, you know? And at the same time, it’s important for us to grow as a band, and also to try and earn a little bit of money, you know what I mean? It’s a fucking hard one, yeah.”

In Nottingham, where Jason is from, the unemployment levels sits at 6.9 per cent, which is almost double the national British average of 3.9. As of the most recent Australian Bureau of Statistics data, South Australia occupies the country’s highest jobless rate in the country at 6.2 per cent.

Jason doesn’t know what South Australians should do if they’re despondent about the economic situation.

Should they make music?

“[But] we both live in countries where we are relatively free to express ourselves… And you can use that expression. You can use it for good things and to influence other people perhaps to do similar things.”

In 2017, Sleaford Mods released the song ‘B.H.S.’ It was titled after the large department store chain that went bust in 2016, leaving thousands of workers in the United Kingdom jobless. Against a bleating bass line, Jason hollers “you can’t blame the betrayed / In the snakes and ladders.”

Jason is almost apologetic about capitalism working for him now.

“Talk about the realities of it, do you know what I mean? That’s how I found my way, you know.”