Before Geoff Cobham steps down as resident designer for the State Theatre Company and into the role of artistic director with Patch Theatre, he has one more abstract design up his sleeve, for That Eye, The Sky.

“Sometimes, like a bolt in the night, you get the one idea that sustains, other times you go through 20 and throw lots out. This one was like pulling teeth,” Geoff Cobham, resident designer with State Theatre Company, explains of the process of designing the set for Tim Winton adaptation, That Eye, The Sky.

Geoff’s work with State Theatre has always been ambitious and quite often abstract – from a giant cave full of light bulbs for Things I Know To Be True, to flooding the stage of the Odeon Theatre in 50 millimetres of water and having the actors perform in a constant stream of rain.

That Eye, The Sky opens on 24 August and runs through until 16 September at Dunstan Playhouse. For tickets and further information, see here.

His approach to That Eye…, and that of the play’s director, Kate Champion, is no different.

“We knew we had to create something on a grand scale – and I’m not very good at doing walls and rooms, it doesn’t do it for me on stage,” Geoff laughs.

“It’s really just a big mound with a giant mattress wall at the back. It’s huge. Then within the mound there’s this timber floor. 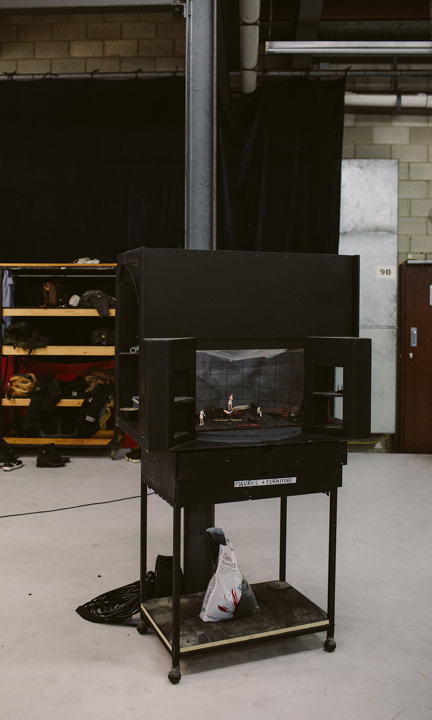 A model of the That Eye, The Sky set.

“It’s almost like they’re in the remnants of the place that they lived, the house. And it’s all told through Ort, the boy, his world. So it’s his view of what’s happening in this house. And we have a big pool of water down the front. So the whole front of the stage thrusts out into the audience, and there’s water in it.”

Geoff’s approach to design is rooted in dance, the medium he studied and has a deep love for, which relies heavily on lighting design to set the tone, rather than the construction of a staged reality.

When Geordie Brookman took the position of artistic director with State Theatre in 2012, he called on Geoff (who Brookman had worked with previously at dance theatre company, Force Majeure) to come on as resident designer, knowing it would mean a departure from the company’s traditional history.

“I was interested in some of their shows being much more abstract in their approach to design, and it’s not always what the playwright might want. And that can be a tension,” Geoff laughs.

“I’m basically creating art installations on stage, and I’m only thinking of the emotion of the play, and there will be times when Geordie’ll go ‘Yeah, but Geoff, they actually are in a house in the 1980s. Why are they in space?’ or ‘Why is there water all over the floor?’

“It was Geordie being adventurous, really. It was quite brave of him to go there. And he was a big part of the design process. Certainly wasn’t me on my own designing all of those things, they’re very much a collaborative process with Geordie and I.”

Rather than strictly being stage or lighting, Geoff’s role combined the two, acting more as a scenographer, but his involvement would be adapted depending on the needs of the play.

For Sense and Sensibility, there was no point creating an abstract world, Geoff says, but in lighting the set in neon pink, purple, and blue hues, his presence as lighting designer was still keenly felt.

“I wouldn’t have a clue how to make a normal set,” Geoff laughs. “I would be so frustrated. I think I’ve only ever managed to put one wall, and even then I found that tricky.

“I wouldn’t get a job anywhere else designing for a state theatre company without someone like Geordie’s vision.”

With his tenure at State Theatre finishing with this season, Geoff is moving to Patch Theatre, where he has been appointed artistic director.

Similarly, in this new role, Geoff will to continue to challenge audiences, and by working with Patch’s younger demographic, he hopes to catalyse change in the way Adelaide audiences approach theatre.

“I’m now going to take the full force of everything I’ve been doing and apply it to a four-to-eight-year-old age group, who I think are the perfect non-narrative audience,” Geoff says.

“I want to create a new audience for theatre that is not putting up with there being a fourth wall, and that they don’t expect it.

“That they are a part of the relationship to the work, not passive observers, because they get a lot of that in their lives with media, they don’t need to come to the theatre and not have that connection.”

After being with State Theatre as resident designer for the better part of a decade, Geoff recognises that it’s time for him to step down and allow fresh blood to make their mark on South Australian theatre.

“I’m sure there are a lot of young designers who will be very pleased to see me go,” Geoff laughs.

It’s quite a legacy to follow, and one that will hopefully inspire the next generation to approach theatre design with the benchmark of emotion and ambition Geoff has set.

“Geordie was so brave and adventurous with what he wanted to do, and his vision, and he took some risks. Let’s hope the next person is just as into taking risks as well.”