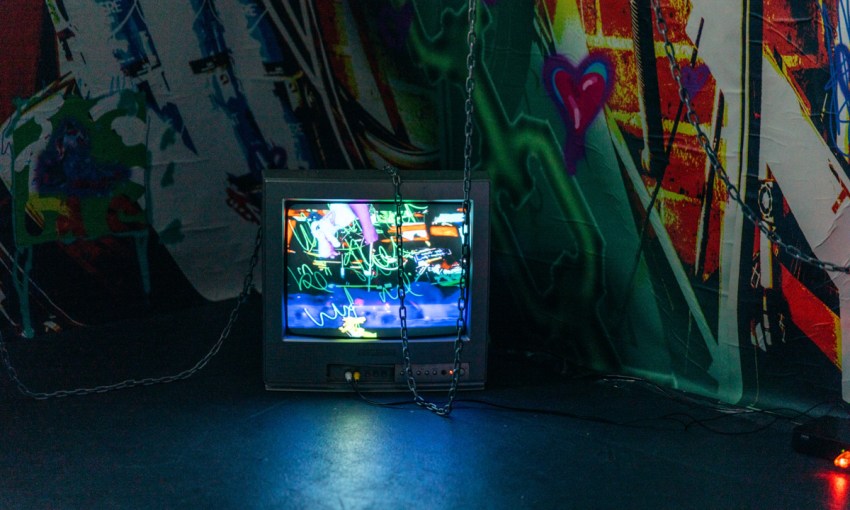 While viewing the May—June exhibitions at FELTspace, a warm memory stirred.

Blushing on the inside, I recalled the home of a primary school friend. It was somewhere near the beach, before it moved to the back of my mind.

FELTspace May—June Exhibitions
Until 18 June
HEK! u r g0ing 2 b ok!
by Isaac Kairouz
I am the Wind
by Monika Morgenstern
Cummy Bummy
by Izzi Selfe

Her backyard was big enough for a number of landmarks; a withered green swing set with plastic yellow seats (we were too good for it at 10), a crook Commodore caked in gum nuts and bird shit, and an ever-evolving homemade fort awkwardly supported by the trunk of a paperbark tree. “Mum says to be careful of the sharp stuff,” her older brothers would shout nonchalantly from across the yard.

We would be careful of the sharp stuff, of which there was a lot. Scrap metal, old MDF sheets and splintering sleepers formed the wonky shelter. It was, ironically, a place where I felt entirely safe. The afterschool light would leak in through tired slats, and we’d tentatively press our faces against them to peek outwards in a Ned Kelly kind of way.

The fort was undergoing constant renovations. Old bits would fall away and new bits would be scavenged to replace them. At one point, a makeshift wind chime was hung above the gap we called a door. As each change occurred, I slowly realised that this gaunt but magnetic place was as fixed as a collapsible table. Transience, it would keenly promise.

At FELTspace, I felt a similar sense of ephemerality and flexibility permeating the work of Isaac Kairouz, Monika Morgenstern and Izzi Selfe – a deeply romantic impermanence.

Isaac’s HEK! u r g0ing 2 b ok! is transient in the way of a local fair. Behind the fun is a reminder that the special occasion will be over soon. With such a florid installation lit so dimly, I get the impression that opening hours are over, or perhaps the ride operators are on a cigarette break.

The artist presents a space that is nostalgic of youth but tainted by the poignant process of outgrowing it. Heavy industrial chains sag from the ceiling like emo birthday streamers. Tangled among them are neon lights that summon memories of school discos lit by glow sticks. But this disco’s been abandoned. The once white gallery walls now buzz with the restlessness and extravagance of troubled teen graffiti. (They just want you to know they were there.) Skilfully invoked, the remembered past takes up present space. 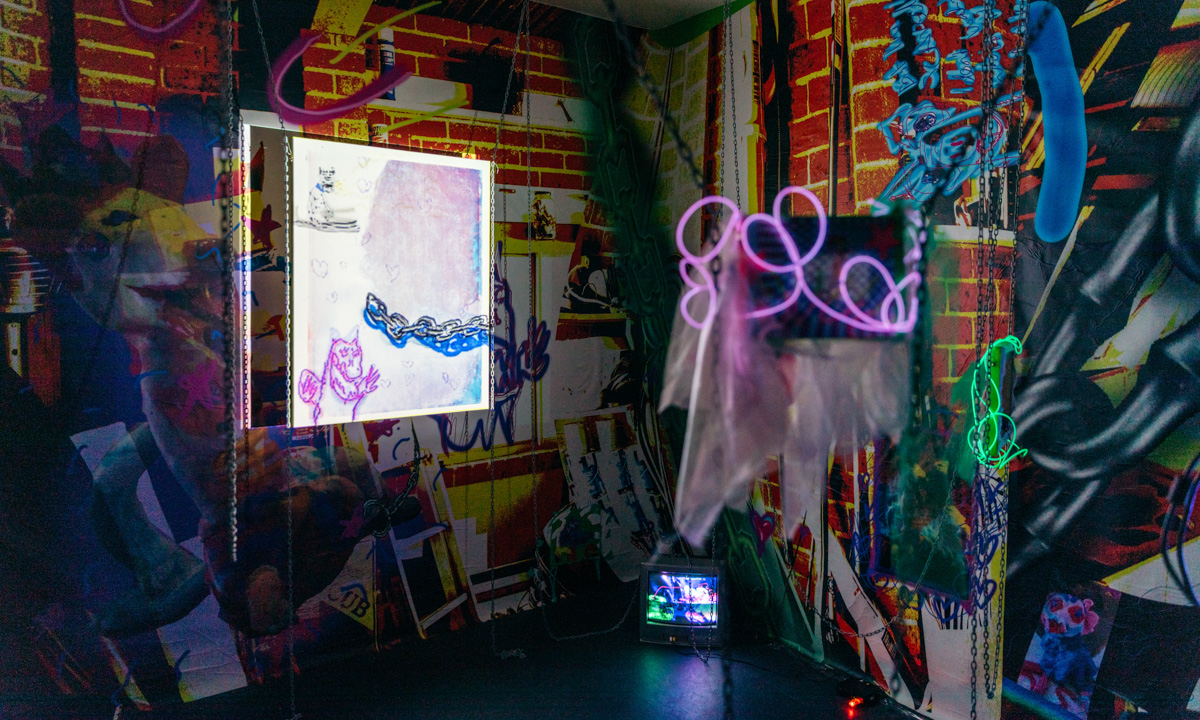 Based in Naarm, Iona Mackenzie’s practice involves sculptural installation and writing. Her research interests centre around folklore and its psychosocial functions in both historical and contemporary contexts.

This piece was produced in collaboration with FELTspace, as part of the FELTwriter program. For more information on the program, see the website.

I like to imagine Isaac’s installation originated in the deepest part of a play centre’s ball pit. There’s a level of juvenile grime that makes total sense. But it’s more than physical. There’s a certain psychological grubbiness that I can’t help but feel drawn to. Isaac prompts the viewer to reminisce on childhood, without adopting the everything is good all the time mentality so often sold to children.

It makes me think of that difficult stage – between growing pains and having to shave – where the stuff of youth doesn’t hit the same. You come to the realisation that childhood is temporary and growing up actually entails getting older. This feeling oozes from the work like Nickelodeon slime, and I’m reminded of the grief that accompanies change. I’m left wanting a glass of strawberry Nesquik (with a shot of brandy, to help ease the transition back to my adult self). 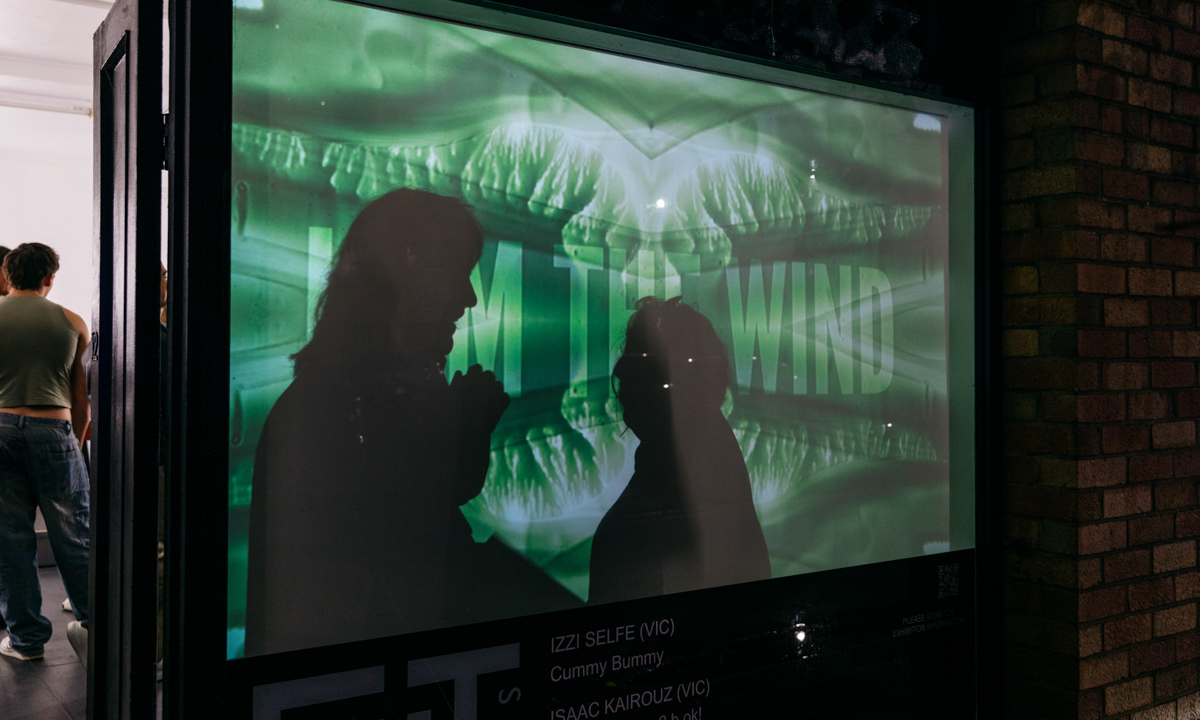 Monika Morgenstern flirts with a similar kind of ephemera. Illuminating the crisp evening, her video work is a gift to the eye of the passerby. Like the aurora borealis, an expanse of alien green shifts into and fuses with itself, and I am, in turn, hypnotised. Surfacing from this sea of light are lyric-like phrases, including the title of the work, I am the Wind. Undeniably, there’s something seductive about bold, capitalised text. It demands your attention: don’t you take your eyes off me, not even for a second. I willingly oblige.

While the video dazzles like the bright beams of an extraterrestrial aircraft, the screen is unambiguously set into a brick wall. Its presentation is familiar; I think of highway billboards and karaoke monitors. But don’t let the familiarity fool you. There’s always something a little spiritual about a screen with a message. Whether it’s the words of Whitney Houston or a generic DETOUR AHEAD, I’m beckoned to read into it, and I always do. I’ll often stare for a second too long, hanging on for the moment where something unintelligible is suddenly articulated.

Monika’s work enacts the same communicative quality: Psst, I have a message for you, take it in, quickly. Her quotidian, open-ended words – like BREATHE and DEEP – take on a scriptural power emphasised by the video’s surging movements and ethereal palette. I am the Wind reminds me to look for meaning in the unassuming. If you’re lucky, a fleeting moment of understanding might fling itself upon you. 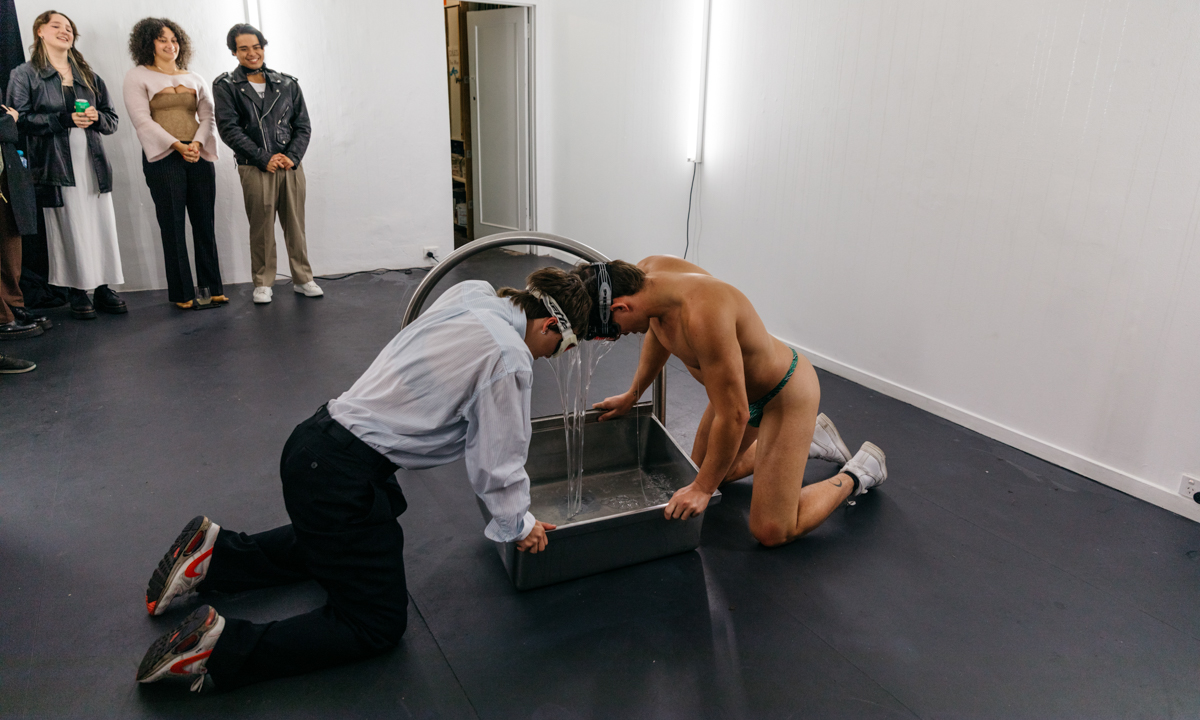 And flung upon we’ve been. Izzi Selfe’s exhibition, Cummy Bummy, soaks the viewer in good ol’ fashioned sex. Dousing the white cube in litres of lube, Izzi prances about like they own the place – and, well, I’m fully convinced they do. To them, FELTspace’s simple linoleum floor is a stage (of the sticky and sweaty kind).

Asserting itself in the centre of this stage is a stainless-steel bike rack, seemingly plucked from the pavement. With their bum in the air, Izzi interacts with it intimately, transforming it from a plain fixture into a pedestrian strip pole. Beside them, naturally, is a utility sink filled with a comical amount of lube. They thrust their hands into it and sling the fluid onto the gallery walls (careful Izzi, you might resurrect Pollock). There’s something so masculine about making a mess. But I sense satire in Selfe’s approach. They indulge in the gesture and exaggerate it. Abstract expressionism liked its mess polished; Izzi’s performance says Nah, fuck that, mess should be messy. 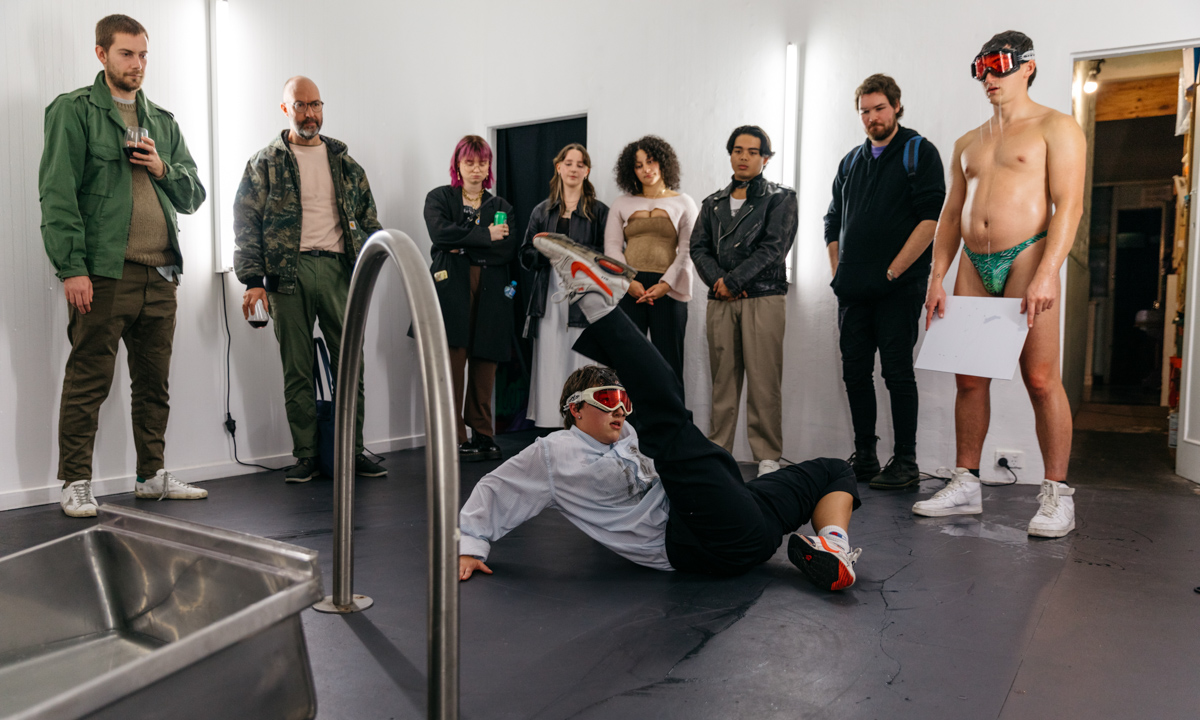 As the syrupy lube drips and pools, I think about what it means to lather a space in it – to, essentially, make the gallery fuckable. Or, as Izzi describes, penetrable. But what does it mean to render something penetrable? To lube it up and spread it open and fill it, fully? Porous and absorbent feel like fitting terms. As these thoughts arrive and I let them sink in, I hear another truth in the exhibition: Having an open hole is a lot like having an open mind. Both require flexibility. Both are good to have. As Izzi asserts in the charming notes they’ve passed on, there is power in allowing yourself to be metaphysically fucked; there’s a lesson to be had in loosening up.

I watch Izzi wallow in the spillages, and by the end of the performance they’re as wet and perfectly primed as the space. Ready now, to take everything in. To be filled up, to be penetrated. 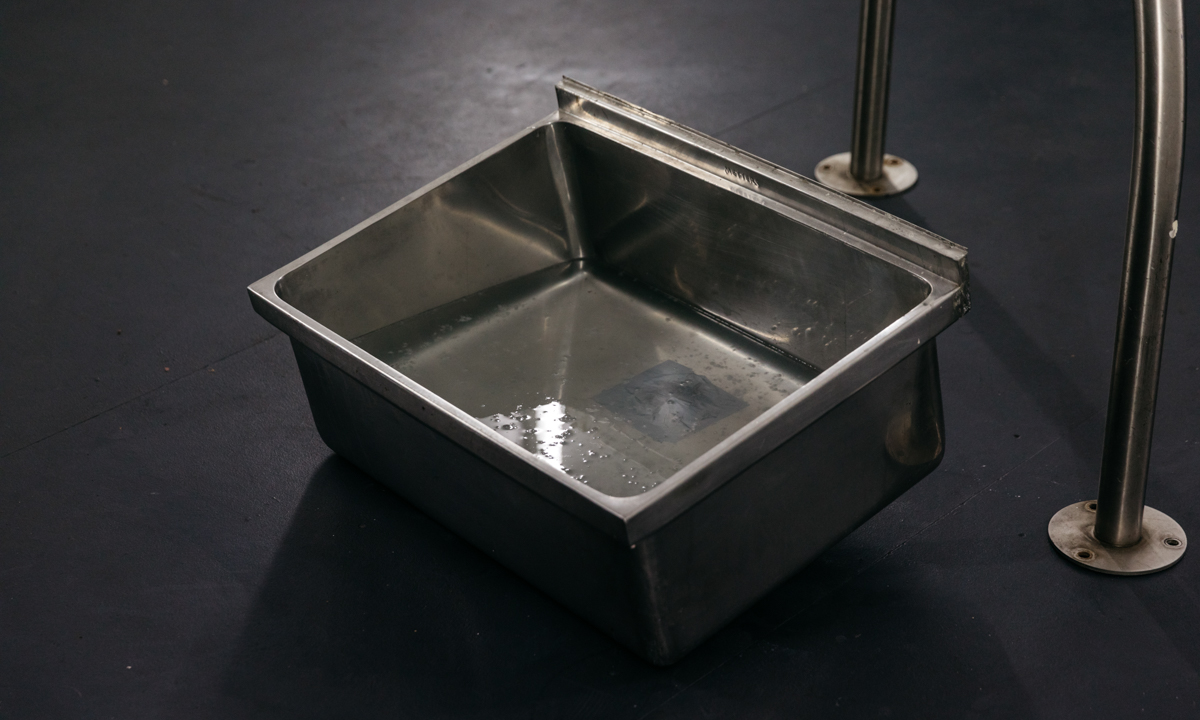