Get ready for East End Block Party: A food, booze and music blowout

With more than 10 bands playing across three stages, a Battle of the Bar saga and food options galore, the East End block is set to transform into a tasty intersection of your favourite interests this Saturday. 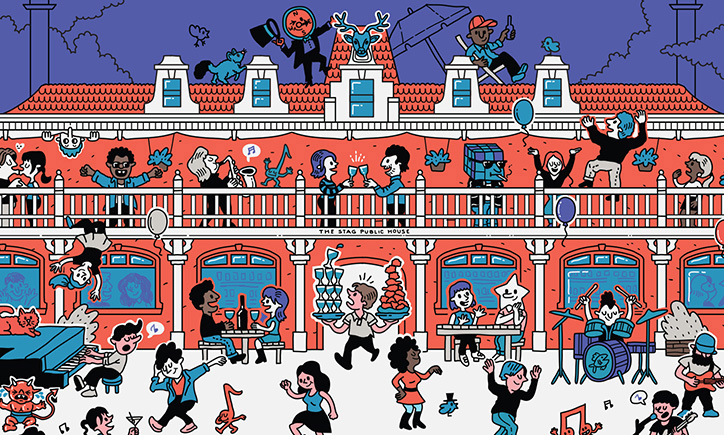 “There’s nothing better than enjoying a glass of wine and a cigarette while dancing outside,” says Neon Tetra bass player, Liam Roche.

“I think it’s just a really good idea, you know, to actually throw music out onto the street so that people can’t hide away from it.”

Liam is talking about the East End Block Party, set to transform a corner of the East End this Saturday (from 3pm to midnight) into a sweaty culmination of the senses.

The bill also includes dance-friendly street food, like yiros from Yiasou George and chicken and tots from NOLA. On drinks there’s a Young Henry’s Laneway Stage and ‘Tinnie Bar,’ plus a Cry Baby versus Hellbound “bar battle” which will quench thirsts throughout the night.

Longstanding groove stalwarts Neon Tetra share a lineup with the likes of Madura Green, Pinkish Blu and The Empty Threats, all of whom will grace the event’s three stages: the Stag, Nola Laneway and Nola Upstairs.

“Our plan really is to close out the night – so from 11pm to 12pm there will be this disco energy, which is what we’re hoping to bring to the whole thing,” says Liam.

The six-piece will also perform their most recently dropped single, Jealous Love, which swirls in funk, pop and twinkling keys.

“We’ve been playing shows with that crew for years and it’s just been so great to see them grow and evolve and become this like crazy psychedelic powerhouse that they are now. But I’m also looking forward to checking out Pinkish Blu for the first time.”

Pinkish Blu exploded on the scene last May with their synth-pop ballads and FILA outfits.

Another band on the bill Madura Green – think big choruses bellowing with emo sentiment – will also feature new tracks fresh out of the recording studio.

“We are on the Stag upstairs stage at 8:20pm,” says Madura Green vocalist and guitarist, Jordan Tito.

“And there will be a lot of our new stuff, which is kind of the new 2.0 accurate representation of what we are now.

“So we’re really excited about doing thing that represent what we are currently instead of before.”

Jordan is also hell-bent on seeing bands like Oscar the Wild and Superdose Gangway, and won’t let this CityMag reporter overlook the deejays.

“Sam Lavers – every time he deejays it’s always a party, so it would be really good to have that in between to get people excited and grooving.