Established jewellery designer Naomi Murrell is expanding her world of whimsy and colour with a foray into clothing design. 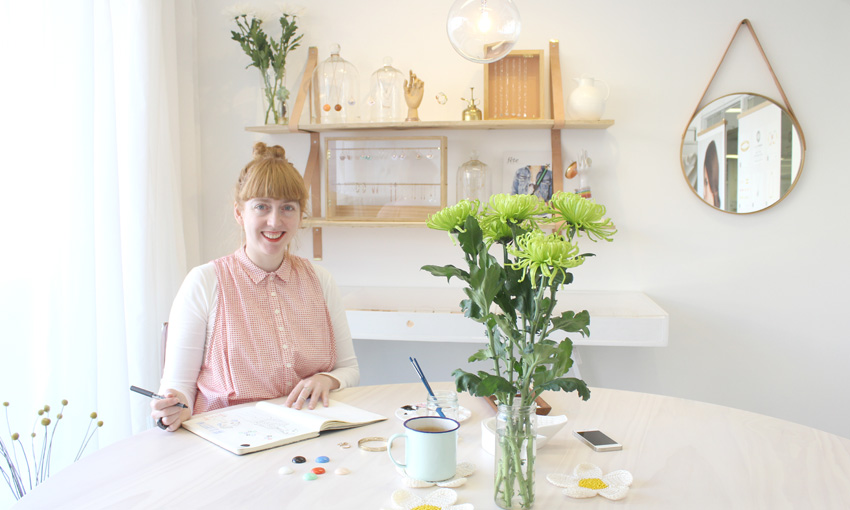 When local jewellery designer Naomi Murrell is preparing for a product shoot, she wanders through retail shops fruitlessly looking for clothes to dress models in and never finding anything quite right.

“I am quite often running around town or stealing things from my sister’s wardrobe – just trying to find something that tells the right story,” she says. “And often I find myself compromising.”

In her head Naomi is very clear about the clothes that would fit with her jewellery, but she just can’t find them on the shelves. Her customers, too, have expressed an interest in seeing the world she creates with her rings, earrings, necklaces and other shiny pieces extended onto cloth.

“We’ve had customers asking us,” she says. “When we had our last pop-up store, because we had another clothing brand on board, people were saying things like ‘Naomi is doing clothing now, Oh that’s amazing!’ – and we had to say that although it was beautiful it’s not actually ours. So from that we knew our customers would be really interested in us doing clothing.”

Naomi puts her ideas to paper

Even with a crystal-clear idea of what her designs would look like and a readymade potential market, there are many things still standing between Naomi and a fully-fledged collection.

Experience in clothing design though, is not one of them. While most of her customers know her purely as a jewellery designer, Naomi comes from a broad background. After studying design she worked at a company called Happy House where she was the head designer in the bag section, and also worked on a couple of clothing projects.

Naomi also has knowledge of pattern-making through courses she has studied for her own interest.

One thing we’ve defined about ourselves recently is that our genre, or our niche, is feelgood fashion – we’re aiming to create something that makes people smile.

“I’ve done some stuff at Catwalk Fabrics in Brompton,” she says. “There’s an amazing lady there who gets these rolls of designers fabrics – just the end of the rolls – and sells them, they’re just beautiful fabrics. And she runs these classes – pattern-making classes – and I learnt lots doing that.

“My Mum sewed a lot of our clothes too when we were little and being a drawer and an illustrator, and I knit, I know how to do all that stuff.”

Money, though, is harder to come by for Naomi than experience. While her jewellery company is well established and profitable, it’s not yet at the stage where throwing tens of thousands of dollars after ideas is plausible.

Instead, to fund her first clothing range she has turned to Pozible. With a target of $10,000, Naomi is hoping to largely receive contributions in the form of pre-purchases of the clothing range or her jewellery. Her project has also been selected to be part of a Creative Partnerships Australia initiative where every dollar raised up to $4000 will be matched by the federal body. The Naomi Murrell shop at The Mill

As long as the target is achieved, summer will see the release of her first clothing range in the form of a capsule collection consisting of about eight pieces.

“For summer, the jewellery and the clothing collection are going to be designed under the same range name. It’s going to be called ‘Chase the Sun’ so it will have a beachy feel to it in some respects,” Naomi says.

“The clothes are going to be all natural fibres so at the moment we’re looking into sourcing organic cottons and silk. It will be quite natural and I think that’s part of our aesthetic – we’re not glam or trendy or sexy – we’re a little bit more understated. And one thing we’ve defined about ourselves recently is that our genre, or our niche, is feelgood fashion – we’re aiming to create something that makes people smile.

“I think with everything we do, from a design point of view, we’re going for simple – refining something down to a nice pure form but then it has to be striking in some way, you have to have an element of surprise.”

Certainly, Naomi Murrell’s left turn from pure jewellery design into clothing provides that element of surprise – but the clothes that result from the new move are likely to be just as striking.