More than just a material held up to reflect society from time to time, Yhonnie Scarce knows glass can capture and portray the darker moments in Australia’s history – just as her work for contemporary Indigenous art festival Tarnanthi does. 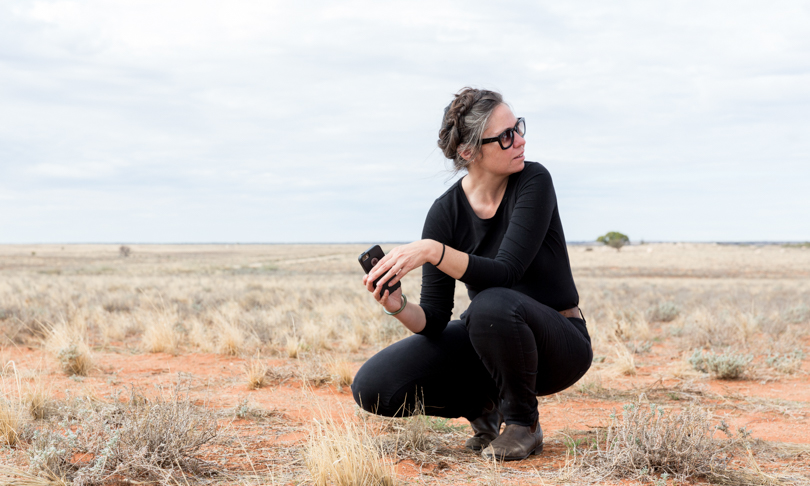 The politically-minded glassblower is working on a major project – Thunder Raining Poison – an installation for the inaugural Tarnanthi Festival of Contemporary Aboriginal and Torres Strait Islander Art.

Tarnanthi’s Creative Director, Nici Cumpston, says the festival, which will run from October 8 – 18, “has provided a unique opportunity for artists to push themselves and their art practice and as a result new and exciting projects are emerging and will be showcased across the city”.

Inspired by the British nuclear tests in Maralinga throughout the ’50s and ’60s, Yhonnie’s piece – a bomb-blast plume created from dozens of glass-blown yams – will be a strong introduction to the festival and one of the first things people see upon entry to the Art Gallery of South Australia.

“When Nici [Cumpston, Creative Director of Tarnanthi] approached me to create a work for Tarnanthi, for me it had to be something of great significance to South Australian history,” Yhonnie says.

“Researching this work, I realised Australia hadn’t talked about [the Maralinga bombings] for a long time.

“I grew up in Alice Springs for a period of time, and I knew about it back then because there was an old Aboriginal man called Yami Lester who was affected by one of the bombs.

“A lot of people from my language group … were affected by those clouds and those bomb blasts as well, so for me it’s quite a personal story.”

No stranger to controversy, it’s no great concern for Yhonnie to be criticised for her work – what’s most important to her is generating discussion.

“Not everyone likes my work,” she says, “and that’s the best part.”

“Even though they say ‘I don’t like it’, you find that people talk about it for a long period of time afterwards.”

“I don’t want [Thunder Raining Poison] to be like a monstrous creature, but I want it to make people think about what it would’ve been like to be in those people’s shoes when the bombs were going off.”

It’s not only the participating artists’ work that is likely to generate discussion, with the promotional line from the festival itself stating that Tarnanthi is looking to “challenge existing notions of Aboriginal art”.

As the University of South Australia’s first Aboriginal art graduate to major in glass, Yhonnie is the living embodiment of this aim.

“I think we’re opening people’s eyes more to the fact that … we’ve got a lot to say in terms of political history, and there’s so many ways of doing it; with moving image and people like myself using a medium that wouldn’t necessarily be seen as Aboriginal art,” Yhonnie says.

“This festival will be able to show that diversity in who we are as artists and as Aboriginal people, and what stories we have to tell.”

“And to be supported by Nici and Nick Mitzevich [Director, Art Gallery of South Australia], and that we’re given a space to have a voice all at once, I think it’s going to be pretty powerful.”

Whether Tarnanthi’s presence is a sign of good health for Australia’s contemporary art scene, Yhonnie couldn’t say, but her experience within it so far has been positive.

“I’m one of the lucky few artists that has been embraced by the art scene and been supported,” Yhonnie says.

“Because Adelaide gets overlooked a bit, I think the Art Gallery of South Australia is doing amazingly well – they’re moving in leaps and bounds under Nick’s guidance. I’m not surprised that this festival has come about in Adelaide.”