Sutra: 18 Shaolin monks and one of Beyoncé’s choreographers

A dance work enabling deep cross-cultural connection that was created by someone who went on to collaborate with Beyoncé – Sutra is relevant, insightful, and emblematic of all the things OzAsia Festival should be.

Sutra was first performed in 2008 – an early foray into international collaboration from the then-fledgling but now-immensely respected Sadler’s Wells venue in London.

Since then, it has toured to more than 33 countries and been performed more than 200 times. Its creator and choreographer – Belgium’s Sidi Larbi Cherkaoui – who was already a well-respected name, has followed a similar stratospheric trajectory, all the way up to working on Beyoncé and JAY-Z’s APESHIT video this year.

Enter promotion code CityMag in the promo code box before selecting seats to see Sutra with us for $59.00.
Buy tickets here.

In celebration of its 10th anniversary, Sutra is on the road again – with this current international tour demonstrating once more how the piece’s resonance refuses to fade.

On the surface, the work seems almost simple in form.

It features a group of 18 Shaolin Monks performing the explosive and acrobatic martial arts manoeuvres they practice as part of their daily rituals. Dancing alongside, opposite, and sometimes with them is a contemporary dancer – a role inhabited sometimes by Ali Thabet and sometimes by Sidi Larbi Cherkaoui himself. The final person on stage is a young monk of about 10-years-old who acts as a guide of sorts for the dancer.

The structure brings to mind a conversation between a group and an outsider, but Ali says Sutra’s exploration of the interaction between a collective of familiars and a singular stranger runs far deeper than a mere exchange of words ever could.

“It is based on the experience that we had during the creation process – three months in the Shaolin temple with Sidi Larbi Cherkaoui the choreographer,” he says.

“Sometimes we try to lead them [the monks] for a scene or an image that we find interesting, but most of the time we had to understand their life to make things happen on stage.”

The process of coming to fully embrace the formerly foreign world of the monks plays out in the episodic nature of the piece, which uses different scenery to explore various facets of their traditions, beliefs, and philosophies.

The set by Antony Gormley is key in the graceful facilitation of this flexibility. 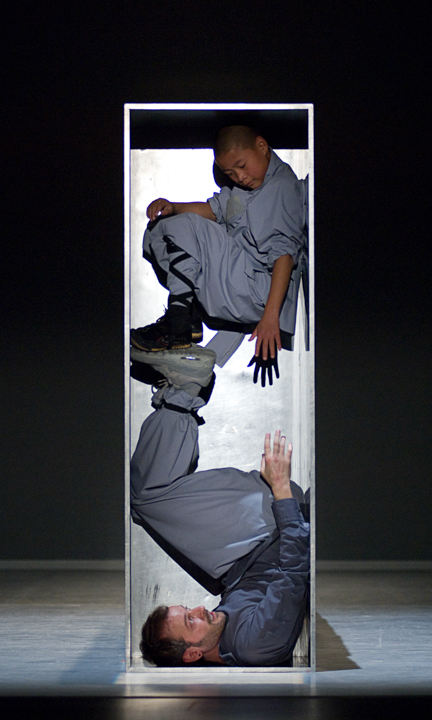 Consisting solely of coffin-sized wooden boxes – one for each monk – the set transforms as readily as the bodies of the performers, morphing from a lotus flower to a city skyline with ease. In these transitions, says Ali, the audience’s imagination is captured and enlivened.

“It is the most simple and clever set that I have experimented with on stage,” he says.

“Antony brings this idea, and the possibilities in terms of image, metaphor, and representation were plenty. We proposed a set that changes constantly, that could make the audiences dream about what they see.”

The intense and often emotional score by polish composer Szymon Brzóska underwrites this dream, as does the almost super-human athleticism of the monks and dancer on stage.

While the monks’ movements are not rooted in the training and language of contemporary dance, Ali says they possess a different kind of poetry – one drawn from the way “they are connected with their body and spirit”.

Pushing into this liminal mental space – the one that bridges the mind, the flesh, and the less conscious parts of self – is how Sutra finds its power.

The relationships between the monks and the stranger might be the tool used for exploring this concept, but ultimately, says Ali, the work is not focussed on the boundaries that separate the performers. It – like any true cross-cultural connection – is about the commonalities that bring everyone together.

“Emotion is the thing that we all share in common.”