The Spinifex Gum music project is equally influenced by the young Indigenous women who give its songs voice and the Pilbara landscape in which those songs were created. 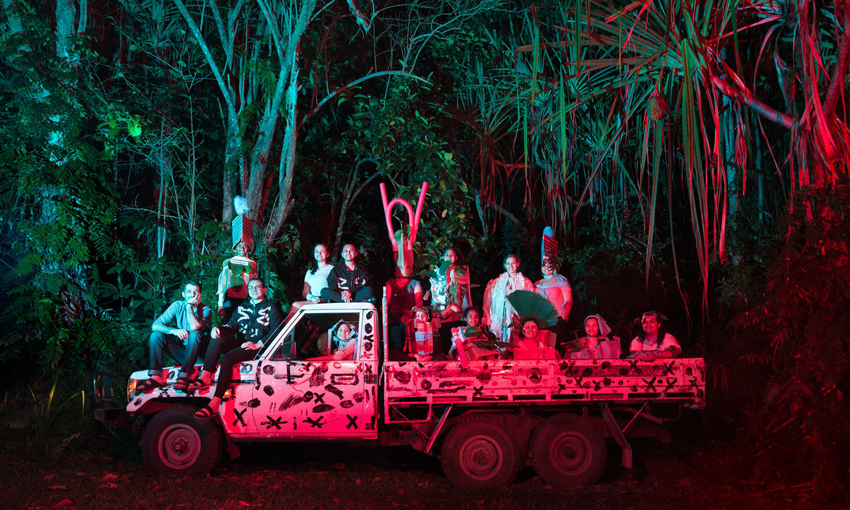 Spinifex Gum is the latest musical project from The Cat Empire’s Felix Riebl and Ollie McGill. Created in collaboration with Marliya – a choir of young Indigenous women based in Cairns – its origins date back to 2014.

Spinifex Gum makes its Adelaide debut as part of Adelaide Festival on March 13 at Her Majesty’s Theatre.

In that year, Felix was commissioned by Lyn Williams – artistic director of The Gondwana Indigenous Children’s Choir – to compose a song-cycle. Heading out into the Pilbara to begin the project, Felix found himself on uncertain creative ground.

“I think there was a fascination with having absolutely no idea what I was going to write about,” says Felix.

“Most of the time in musical projects you kind of know the parameters – like if I’m making an album for the Cat Empire, it’s still got its own mystery to it but you know the kind of format, whereas Spinifex Gum started as something completely unknown.”

Initially, Felix found the depth of what he didn’t know – his unfamiliarity with the communities in which he was working and the vast starkness of the landscape – could be overwhelming. But there were two experiences that began to give the project shape.

The first was an early performance of the Gondwana Indigenous Children’s Choir (from which all members of Marliya are drawn) that he saw.

“They performed one of their repertoire shows, and it is really moving and very professional,” says Felix.

“But after the show they sort of just exploded into this really kind of bombastic pop music in a small community hall in a little town. That was one of the moments where I felt like something has opened up.

“I realised I would like to write music that was usually meant for one vocal, but have it performed by a choir.”

The other key to Spinifex Gum’s early compositions came from a sound recorder Felix had been taking with him as he travelled through Pilbara communities.

“I had just recorded a lot of sounds, and those elements of the sound, you know the fragments of them, became the samples in the pieces,” says Felix.

“We ended up making drum machines of all the sounds that came from that area, so I think I’m fascinated by the sounds that come out of the landscape especially in contrast to this really beautiful choir that just started singing out of the blue one night.”

These experiences informed the aural backbone of Spinifex Gum’s songs – which are characterised by bombastic, driving beats, detailed and unusual percussive use of the ambient sound, and the beauty and directness of Marliya’s choral vocals.

For the content of the songs, Felix also drew on his surroundings, and began to write about issues that were important to the people he had become close with while working on the project.

The album includes protest songs like Ms Dhu, which deals with the 2014 death in custody of a 22-year-old Aboriginal woman, as well as Locked Up – a track featuring Briggs that tackles the incredibly high rates of juvenile incarceration among Indigenous populations.

“We are entering a space where we are considering this as an Australian statement in a lot of these songs as opposed to just an indigenous one, to say that this is about all sides of Australia,” says Felix.

“Musically, it was also an album that was willing to throw its hat into the ring politically – to say this is important to speak about.”

For the members of Marliya who perform the songs alongside Felix and other guest artists like Emma Donovan and Peter Garrett, the messages in the songs have become personally important – as has learning and using the First Nations languages that are used in many of them.

“The songs that we sing, we put emotion into it,” says Marliya member Zhane. “We feel it, we learn about the background of the song and the language that we’re singing in and what the story is behind it. So, we have that emotion attached to it and it’s really powerful.”

While many of the songs are heavy in subject matter, Marliya member Ci’ellah says the lighter music is equally important – especially for live performance.

“The song Marliya is more happy and it has a positive emotion to it – ire’ really happy and cheerful,” she says.

“You can tell the bad side of the stories and then you have to have something good in there so people can enjoy themselves too.”

Ci’ellah, Zhane, and their fellow choristers will be performing with Felix, and special guests Peter Garrett and Emma Donovan when Spinifex Gum makes its Adelaide debut as part of Adelaide Festival on March 13.