The State Theatre Company's Beckett Triptych is a challenging and ambitious presentation, but skilful handling makes it a risk worth taking. 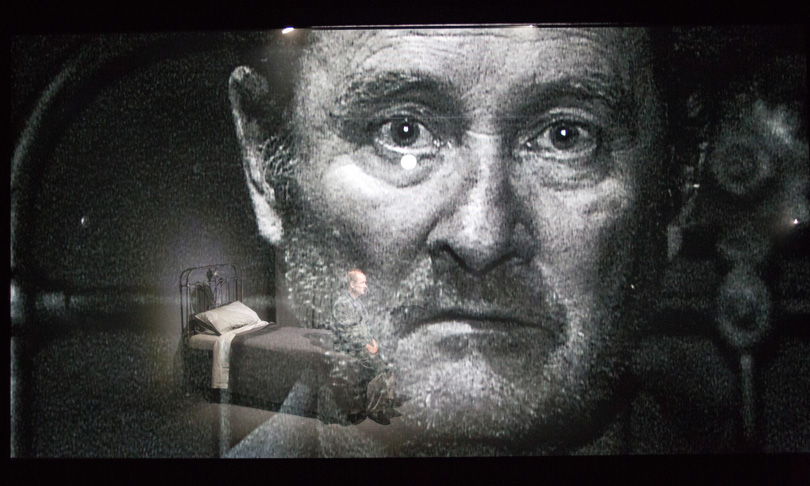 There’s a different quality to the darkness that falls in unfamiliar spaces – it seems deeper and orientation is easily lost amid its folds.

The State Theatre Company’s Beckett Triptych makes the most of its unconventional workshop setting by plunging the opening night audience (who are no doubt very familiar with the normal Festival Centre spaces) into a thick blackness after first bombarding us with flashing overhead lights and a grinding soundtrack, stimulating the senses just enough to make us fully aware of our own disorientation.

It’s a skilful and perfectly managed entry into the world of Beckett, which is by no means straightforward, but makes a little more sense when reality has been dislocated and re-arranged around you.

The lights come up first (though only dimly) on Footfalls – a disjointed portrait of the prison we build for ourselves from memories. It is a challenging, non-narrative piece, but the power of Pamela Rabe’s compelling performance and Geordie Brookman’s instinctive direction sees the audience engaged and tense. The spare set and slightly haggard costume designed by Ailsa Paterson recall horror movie tropes that only become more relevant as main character (if you could call her that) May’s face twists through obsessions on past events that sit just beyond the reach of audience comprehension.

This version of the work holds you half in the world of the stage and sends the rest of you falling backwards into your own mind, conjuring a dream-like series of reflections. It’s different to the more ubiquitous theatre that takes you into a different world and absorbs you there, but just as worthwhile.

The second work, Eh Joe, continues in this vein. Another round of manic lights and sharp sounds precede the reveal of a proportionally discomfiting set, which again works as metaphor for the inside of a mind – this time one being forced to face up to the way it has treated others. The silent performance from Paul Blackwell is disturbing and the inventive staging of the play emphasises just how far his character has travelled from being comfortable in his self.

The final, full-length work offers a little relief from the uncompromising harshness of the previous two. Krapp’s Last Tape is a more relatable narrative and the tragicomic portrayal drawn within it by actor Peter Carroll is full of moments of light relief. Still, its messages are just as heavy as those related previously and Nescha Jelk’s direction of Carroll amid the controlled clutter of the set ensures that the comedy never erases the seriousness of what is being communicated.

Presenting three Beckett plays in a single evening is ambitious, and demonstrates a certain trust between the State Theatre Company and its audience. But the trust has been earned here, and while the evening spent with Beckett might not be cheerful, it is insightful and affecting.

My friend in quarantine

Pleasers and pennies: Making bank online as a sex worker

Peter Drew’s poster love in the time of COVID-19