OzAsia Festival opens today, bringing an eclectic and intriguing selection of artists and performers from around the region to Adelaide. 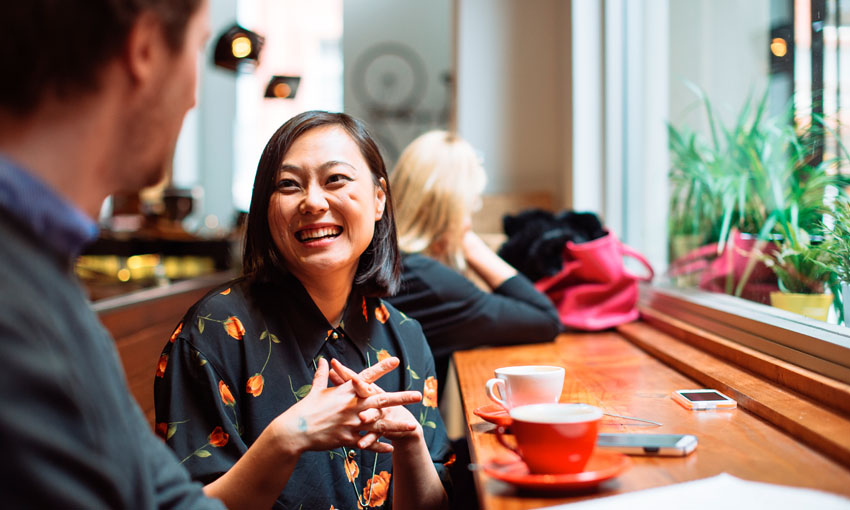 This year’s festival has a particular focus on South Australia’s sister state, Shandong Province (located on the east coast of China) – with a curated mix of Shandong-produced dance, acrobatics, plays, films and art exhibitions. Among them is the ethereal Dream of the Ghost Story by Shandong Acrobatic Troupe, and Red Sorghum by Qingdao Song and Dance Theatre – a dance/drama based on the novel by Nobel Prize winning author Mo Yan.

Also headed to the festival is electronic act Nova Heart, a solo-project-turned-band fronted by Helen Feng. Nova Heart self-describes their sound as “naked ghosts dancing under mirrorballs in an old Beijing hutong”, and that (surprisingly) is not too far off. It’s dreamlike, echoey disco music – sounding both smooth and seductive, but also dark, industrial, and low.

“I think societies don’t just have ‘sounds’, they have ‘souls’. Sounds should be expressive of that soul…”

Helen, who was born in Beijing and grew up in the US and Canada, has a busy history in China’s music world. Since her return to Beijing in the early 2000s she has worked as a VJ for MTV China, hosted popular indie music radio shows, as well as fronting several bands including Ziyo and Pet Conspiracy.

CityMag: Japan, South Korea and Taiwan are known for their huge pop music industries – it’s basically a science in those countries. How about China?

Helen Feng: One of the things I’m super proud of about China is that our pop industry sucks ass. It’s really horrible! The pop stars we’re producing are not exportable anywhere. Most of them are barely functioning idiots. There’s a couple of decent ones who are actually able to sing and dance, but compared to the pop machine of Korea, Taiwan and Japan, they pale by comparison. So I’m very proud of that, because it means that we actually have a bit of space in our society for other styles of music to emerge.

The media’s much more scattered, so it means that it’s not centralised around a few companies. Everything about China – the mere chaoticness in the way that the media system works – makes it easier for niche things to happen. I think it’s in super-developed countries with super-developed media, where everything’s very orderly, and everything’s got a great system – that’s when pop works best.

C: Accompanying the huge growth of the middle class in China, has there been a corresponding, palpable transformation in the Chinese music scene?

HF: Definitely there’s something going on with the growth of the middle class and the underground being all tied together. There are definitely more kids who are second or third generation stable families… Actually, rock and roll was an act of rebellion, all the way up until about five years ago. Now it’s cool to be in a band. […]

There’s a band called Second Hand Roses, that have been around since the late 90s. They’re super huge in China now – they’re kind of almost poppish, they have a huge following, and do stadium shows and whatnot. That band wrote a song called ‘What’s the point of doing rock and roll?’, which is about a parent talking to his kids, saying ‘so you’re in a band – what the fuck’s the point of that? Can you make money with that?’  It’s just this conversation, but it’s really funny and humorous the way they express it. And, by the way, the lead singer is a cross-dresser. He’s less cross-dressy now, though, he does just more make-up… [In the past], he would have 20, 30, maybe 100 people in front of him rocking out, and that was a pretty big show. And now he’s playing stadiums, of 5,000 [people]. This is the growth of society. He’s on television in his makeup, on [government station] CCTV, rocking out in front of 5,000 people. So there has been a big growth of music. C: Do you think the Chinese music scene is due a breakout, international success soon?

HF: I can name the bands that are getting big internationally, because we keep on bumping into them. It’s [my band] Nova Heart, Carsick Cars, Hanggai and, on a lower level, but just starting now are ReTros, and my former band Pet Conspiracy. And there are a couple of folk acts that are getting quite big, and then there are some [acts] getting big in individual scenes, like White+, which is another project from [Zhang Shouwang] from Carsick Cars. They’re getting bigger in the noise scene – they had an album produced by [Einstürzende Neubauten frontman and Nick Cave collaborator] Blixa Bargeld, which is pretty awesome. The latest album from Carsick Cars was produced by the guy from Spacemen 3 – so now there’s a lot more crossovers… There are a couple of bands from Maybe Mars [a label] that have started breaking, or start a trend. It’ll be like: the first band to get a write up in NME. The first band to get a write up in Rolling Stone. The first band to be reviewed by Pitchfork. It’s all these little accumulations of stuff going on.

But all of those bands are actually from one generation of musicians. All of us came up in early 2000, when it was the hardest time to be in a band, period. There were no venues, there was no money. If you got cab fare by the end of the night, it was a good show […] Everyone went through the phase where we were like just cooking potatoes as our daily nutrition. You could call it ‘the city of potato eaters’, in a way, because we were like the Irish immigrants of Beijing – living in hovels, playing our instruments in shit bars and getting enough money to cook potatoes. I was doing slightly better because I was working in media, but my band mates were definitely living the grungy life, and a lot of people were. So they have a certain work ethic, and a certain kind of ideology that kind of carried them through.

I think a lot of the young kids doing it these days are kind of doing it because it’s trendy and they think it’s going to be cool and fun. When they find it’s actually quite a lot of hard work, and you don’t earn as much money, and the fame is okay but it’s quite hard to break through because there’s already assholes like [my band] at the top – we’re like, ‘we’ve been doing this for ten years and you haven’t paid your dues!’ So a lot of kids start dropping out after doing a band for one or two years, because they just feel like it’s not worth the effort. Frankly, this generation of Chinese kids tend to be a bit more spoiled than our generation. We had less to be spoiled with.

C: Listening to Nova Heart, I was actively trying to listen for a ‘Chinese sound’ in the music, but then I got to wondering whether regional sounds even exist in music these days.

HF: There is a regional sound, but it isn’t necessarily like you have to pull out some ethnic instrument. I think you’re right about regional sounds not existing in a way, because everybody listens to similar music now, everybody is wired into the same networks of information, because of the internet… So instead of having like a ‘regional sound’, I think there’s a ‘regional attitude’ that people have, which is reflective of the way they’re living.

I think the attitude in China is very ironic, slightly cynical, but also relatively still progressive. It’s like the country itself. There’s a lot more industrial elements in the music, there are a lot of things that are supposed to create a certain level of discomfort. And it’s still a bit hokey on some levels. That is the regional sound of Beijing… There’s a lot of emulating of Western ideas, as well. Honestly, when people talk about regional sounds, they’re talking about our trends. They’re not necessarily talking about a real soul. I think societies don’t just have ‘sounds’, they have ‘souls’. And sounds should be expressive of that sound… And Beijing definitely has a pretty fucking industrial soul. And I think it comes out definitely more in the new album.

Nova Heart plays the Space Theatre on September 19 and 20.

C: How difficult is it to write in Chinese compared to English?

HF: Like ten times more difficult. I was born in China, and left in second grade. I kept on going back when I was a teenager every year, from age ten on. And after I graduated from college, I moved back to China. So my Chinese is not poetry-level Chinese. But even if you are poetry-level Chinese – the problem is that Chinese is like one syllable, and the syllables have tones. So when you write music that’s very expressive, you have to make sure that the word, the tone and the expression fit together. So if you want to do a really complicated, weird idea, it’s very difficult. Sometimes, people just get into a kind of a rapping-like sound. It’s almost like a sing-speak, because it’s so hard to work these poetic ideas into the music.