Immerse yourself in the other-worldly beauty Of All Things

Alison Currie has a long history of incorporating objects into her dance pieces.

In Concrete Impermanence, dancers performed with pleated cardboard in an exploration of grief and trauma, while more recent work De-Limit ­– a finalist in the 2020 national Keir Choreographic Awards – was the result of a collaboration with visual artist David Cross that involved the making of an art installation on stage.

Of All Things by Australian Dance Theatre
The Odeon Theatre
57a Queen Street, Norwood 5067
More info

Of All Things was scheduled to open on Thursday, 19 November, but has been postponed for two weeks due to the latest COVID-19 restrictions.

Now, for the first time, Alison has worked with a design firm, Enoki, to create a new work for Australian Dance Theatre.

Of All Things sees six dancers perform with a range of objects in an exploration of the way humans “morph, meld and fuse” with their physical surroundings. Audience members can expect to be taken on a journey into a constantly changing strange and wonderful world.

“I don’t want to prescribe how people interpret it, but I had started thinking about what if the outside world is really hostile and can’t support life, and we’re in another universe or we’re in the future, but inside buildings there are these oases for new life to form,” Alison explains to CityMag.

“So I wanted this idea that there was an evolution coming out of the building… you come into the theatre and you have this sense of being in a different world.

“It starts off quite saturated in red light and the sound has already begun when you enter and it draws you in – it’s quite immersive.

“There are sculptural forms behind the audience and above them that are fixed, and then there are the objects that we’re using in the performance that move.” 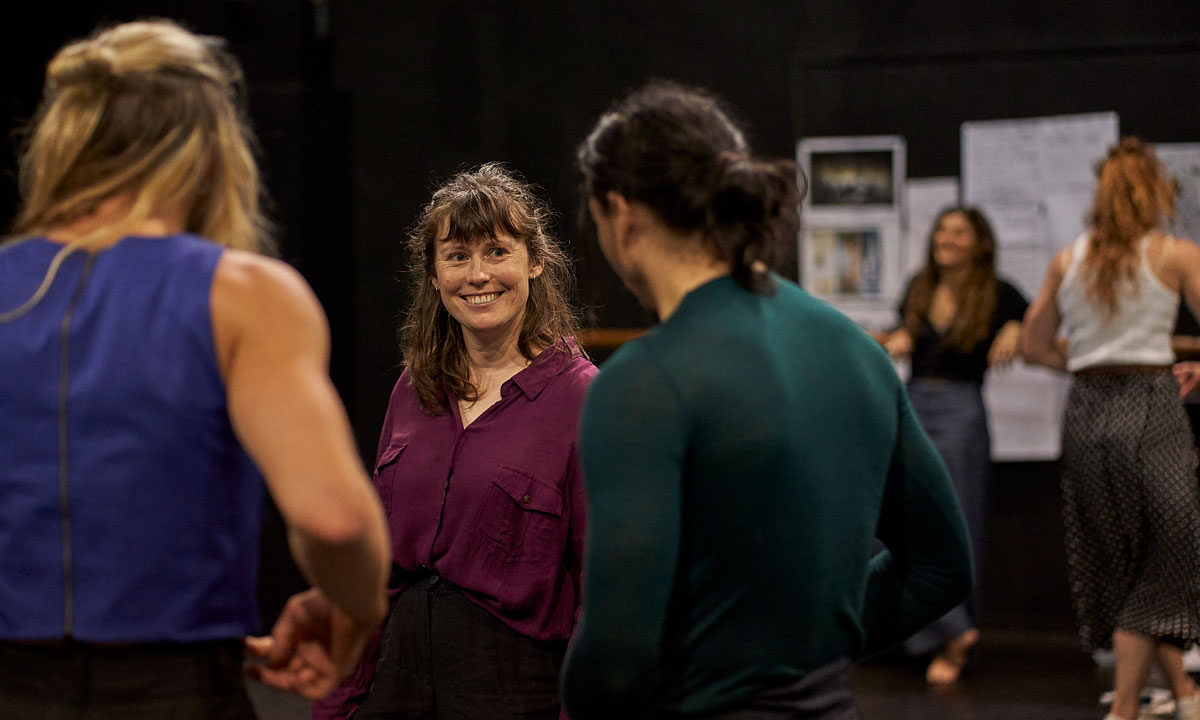 Alison Currie during rehearsals for Of All Things.

Alison says she and the Enoki designers came up with a number of different possible worlds that could be created within the work, then took these ideas into the studio with the dancers.

“Through working with them and the objects, it’s really choreographed the dance as well as the design of the show.”

It was the designers who came up with the suggestion of using giant goon sacks in Of All Things.

The bags, which have a shiny metallic exterior, are normally used for transporting large quantities of wine for export. For the dance, they have been repurposed as movable objects on stage.

“We’ve got them becoming environments, like a sort of glacier movement, then more like creatures in their own right… they have various different functions within the work. At one point they are almost a landscape underneath a floor covering,” Alison says.

There are 12 bags, and they weren’t always easy to work with.

“The dancers and I developed a few different techniques trying to wrangle them,” Alison says, laughing.

“That’s the other thing with objects – weirdly, even though they’re objects and not animate, they’re not consistent. You do something with them one day and it works, but the next day it doesn’t, so a bit of improvisation is always necessary to manage the unpredictability of the objects.”

Silks that are usually used for aerial yoga will hang above the stage to give the feeling that the ceiling might be growing or reaching into the space, while other sculptural forms such as weblike wire mesh and cloud shapes add to the illusion that the building is organic in nature.

Alison says the use of haze suggests the strange world of Of All Things might be a gassy planet with a different atmosphere to Earth.

Sound designer Sascha Budimski has created a sonically rich soundscape to accompany the work, while Chris Petridis’ lighting design is crucial to the environment created.

“He (Chris) has really taken on board this idea that the space has evolved to be a different world,” Alison says.

“He’s got lots of moving lights and things that will flicker through the space at different times, and then saturating colour through the air with this haze.”

Alison’s older sister Bridget Currie, who works primarily in sculpture, has been a strong influence on her artistic practice. The pair have collaborated previously on two works, including Things Meeting Now, created for the Art Gallery of SA’s 2017 event Versus Rodin.

Alison has found that incorporating objects into her choreography can help to explore themes such as how both humans and resources are exploited in the world.

“What I love in general with contemporary dance is that sometimes the people you see on stage really are (seen as) people, and you see the human and emotion and effort, and at other times you can reduce the movement to quite abstract feelings. Adding the objects into that creates another third level, where the human could be reduced to the object and the object could be animated to another creation,” she says.

“So that compassion and lack of compassion or brutality to one another really gets highlighted – I don’t know if everyone will see that in the work, but that’s why I get drawn to working with objects.

“They help highlight the good, the bad and the ugly of humanity.”

Of All Things was set to open at The Odeon in Norwood this Thursday, 19 November, but the season is now likely to be postponed until December due to the latest COVID-19 restrictions.

For updated information on the show, check the ADT website.

J-MILLA is a rising star in Adelaide hip hop