At Home with Dr YaYa

Ahead of the opening of his micronation-cum-arts-club Surrender tomorrow night, Australia’s newest dictator Dr YaYa takes us on a tour of his palatial home and tackles the big issue of whether gold or silver fittings are most appropriate for tapwear. 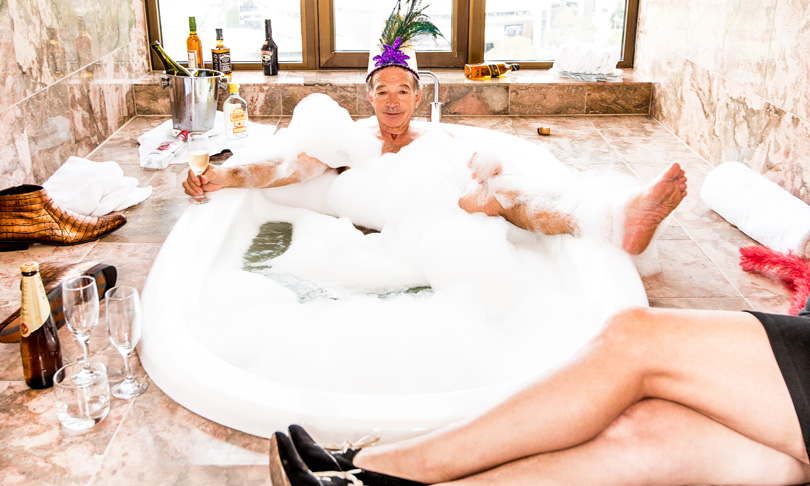 During our interview, Dr YaYa has a bath in the Presidential Suite at the Intercontinental Hotel.

He has decided to make the hotel his base during his reign of power as leader of Surrender – a new arts club-cum -micronation that has seceded from the rest of Australia.

Surrender is a new arts and club experience from the creators of Barrio that will operate for three weeks on the Riverbank from February 20. CityMag is Surrender’s media partner and Dr YaYa’s preferred propaganda machine.

Between sips of champagne, the dictator (whose full name is Sir Doctor Teddy YaYa) told us he had come from abroad to save Australia from itself.

“Essentially Australia is in such a horrible mess that we need to set an example for all the countries in the world to not go down the Australian path,” he says.

Surrender will be run as a single-party state under Dr YaYa’s leadership, but he assures us that there’s no need to worry about the possibility of him going mad with power.

“I liked Kevin Rudd,” he says. “Most people didn’t like him, but if they let him have all the portfolios everything would have been ok. Why not let people who are very competent do everything?

“As long as people have principles, it’s fine – and I have humanitarian and left-leaning principles. We have to start somewhere, so let’s start small just for three nights each week during the time of the Adelaide Fringe. But the revolution could grow from here, I would hope.”

The revolution is likely to be very popular, given that it seems to be based on the principles of hedonism.

Throughout every evening of its existence Surrender will be full of food, wine, dancing, art, expos and immersive experiences that are difficult to describe.

Each night’s festivities will be themed and will include an address from Dr YaYa as well as experts on the ground. Just as an example, the Adelaide Advanced Rocketry Club will actually be launching rockets during March 7’s space night.

“We’d hope it would be a culturally free place where we’re not bound by any of the edicts Australia imposes on people,” says Dr YaYa. “Australia is imposing on people a sense of boredom and ennui, and they just don’t want to try anymore so we’re going to try to push the area of entertainment a little bit further.

“I want it to be a very delicious place of food and wine and sex. It’s essentially for pleasure – we’re hedonists and epicureans in Surrender.”

“The Intercontinental Hotel is my sort of hotel,” says Dr YaYa. “I’m not sure when it was built but it has a good ’80s sort of feel about it. It’s got a good quality presidential suite where I’ll be staying every night.

“I like the gold and I like the chintzy appointments there, and I particularly like the jacuzzi where I can look down on my mini empire. I love the feel of it. I would ask if maybe they could have gold taps but I’m not sure they’d be able to get them in time.”

Apart from gold taps, Dr YaYa wants for little. Unlike other dictators, who he says are often “kitsch”, he’s not interested in trinkets or worldly possessions. All he’s after is your soul and undying love and commitment.

“If people can give themselves and surrender to me that’s perfect,” he says. “Gifts of wives are appreciated too. Or animals.”