Deluge - the first work from new SA theatre company Tiny Bricks - will make a high level debut as part of the Adelaide Festival next week. 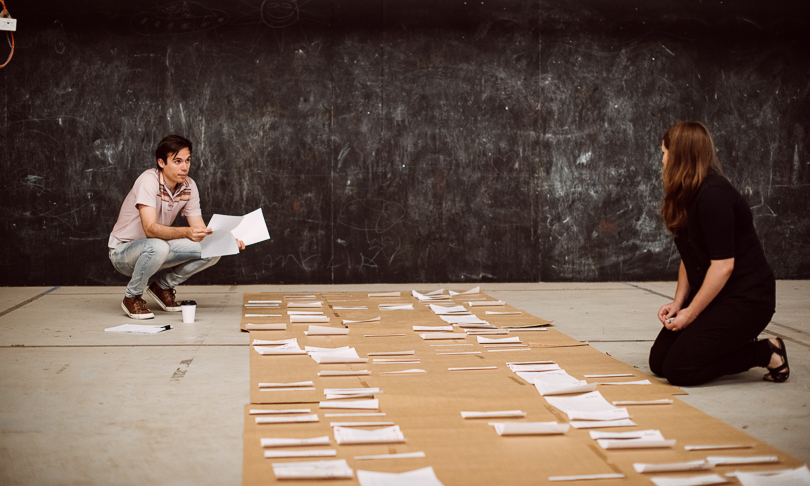 Those closest to playwright Phillip Kavanagh and director Nescha Jelk probably always knew they were destined for great things. And now the theatre community has cottoned on, the duo is trundling down an exciting new path.

Their newly-founded theatre company, Tiny Bricks, is the sum of many parts and has been a long time in the making; however, even before Tiny Bricks there was Deluge.

Making an astoundingly high-level debut at this year’s Adelaide Festival of the Arts, Deluge started its life in 2013. That year, Phil received the Australia Council JUMP mentorship – a program that pairs emerging artists with established ones – and he set about writing something “really large, with as many actors as I could” under the guidance of his mentor Andrew Bovell.

Not long into the process, he approached Nescha to see if she was keen to come on board. The pair already had a mutual respect for one another after previous collaborations on South Australian productions. As fate would have it, the weeks Phil had booked his actors coincided with the only time Nescha could take off that year.

From here, their creative partnership flourished as they continued to refine Deluge. However, if it wasn’t for the funding they’ve received over the three-year creative process, this wouldn’t have been possible.

Indeed, since 2013 they’ve been awarded grants that underwrote five weeks of creative development, which Nescha says is very rare when developing new work.

Most importantly, the process allowed the pair to experiment and embrace the play’s abstract nature.

“We had the freedom to be brave and ambitious, because if it all came to nothing that would have been fine,” Phil says.

“We had the freedom to be brave and ambitious, because if it all came to nothing that would have been fine.” – Phillip Kavanagh

While they’d already dubbed themselves as a theatre husband and wife, it wasn’t until they’d successfully pitched Deluge to the Adelaide Festival of the Arts they decided they needed to be more than just Phil and Nescha.

Circumstances aside, the pair also loves working together.

“Dramaturgically, we think about plays in the same way. For us it’s the ideas that are explored or the questions that are asked, as opposed to narrative, character, form or genre,” Nescha says.

The play, to which Tiny Bricks owes its existence, explores how we cope in a world where there’s a continuous overload of information.

“One metaphor we like to use for how we want our audiences to feel is as if you’re at home and you have the TV on in the background, you’re doing work on your laptop and you get an email and then your phone goes off, just as your housemate walks through the door and starts talking to you,” she says.

Although it’s a play about information anxiety, the theme isn’t conjured through narrative, but rather from the experience of watching the performance. A multi-layered work is the painstaking result of an experimental production process undertaken by Phil and Nescha.

“I’d written five plays, which were polished individually, but I wanted to figure out how they could sit together as a whole,” Phil says.

“We tried having the five scripts play out altogether, but the result was headache-inducing,” Nescha says, wincing at the memory.

After cutting and placing the scripts in five columns along the floor, the play started to adopt the structure of a piece of music. And with this haphazard approach, the five plays turned into one cohesive symphony of voices.

Something the pair are both certain of is how integral support from the South Australian arts community has been in helping Tiny Bricks flourish.

‘The theatre community here is such a family. Rather than competing against each other, there’s recognition that the stronger we all are the better our industry is,’ Nescha says.

In hindsight, it seems Tiny Bricks is an apt name not only for this exciting new company, but for the show too, which has grown brick by brick, nourished by a willing community of theatre makers